The formula of this game is excellent for so many other applications in game that just isn't John Wick. Slowing down a film series known for violence, speed, and momentum to thoughtful violence doesn't work. John Wick Hex is far from a bad game, it's just not as well... executed. Dissonance aside, the game offers a challenge through to the end, and isn't insurmountable. The replay mode should be the highlight of John Wick Hex, but the stilted movement makes it a gag reel instead. So, if you can get past its issues and oddness, you'll find an engrossing game of strategy and tactics where every bullet counts, and actually matters.

Master Assassin, Baba Yaga, The Boogeyman, The Devil. These are names for the eponymous John Wick. How he got these names, John Wick Hex tries to fill in with his badassery in this standalone prequel to the movies starring Keanu Reeves, featuring only his likeness and not his voice here. As a whole, it works well without it being shoehorned somewhere within the numbered series that messes up the chronology. Mike Bithell has developed memorable and engrossing story-driven games with great gameplay before, but his touch feels notably absent here. John Wick Hex is a smart game made fallible by messing with the core of this action series: slowing it down.

After a short introduction, you’re thrust into combat, which is the crux of the game. Think of the gameplay as puzzles pieces on a table. Movement is done on nodes, and is synchronously turn-based with enemies across a timeline. You can move in semi-real-time until John spots an enemy. From there you have options to shoot or close the distance for hand-to-hand combat to conserve ammo. Each kill adds a piece to another piece, starting to form a picture. The game moves in this timeline, showing how long your action takes compared to an enemies, so decisions on what you’ll do are affected by this timeline. Do I make a tactical decision to throw gun and lose it temporarily? Or do I crouch, roll, and try to perform a takedown without taking damage? These are the decisions you’ll have to make to try to replicate the choreographed gun ballet that is John Wick; this is all while maintaining health, retaining focus, and having the right stance to perform these actions. Once you reach the final checkpoint of the level, your puzzle is complete.

It’s when these pieces of combat are together, where it starts to fall apart. At the end of a level in John Wick Hex, you can watch the replay that stitches together everything you’ve done in it. This is the supposed pay off for the interrupted momentum. I audibly laughed at the first time seeing the replay, partly due to me fumbling through the first level, but it also puts my faults on display. When I got used to the turn-based gameplay and watched a replay, the game‘s faults are put on display: enemies move erratically and jerky, there’s no transition animations for John from one move to the other, and it all looks so janky seeing it this way. It really hurts. 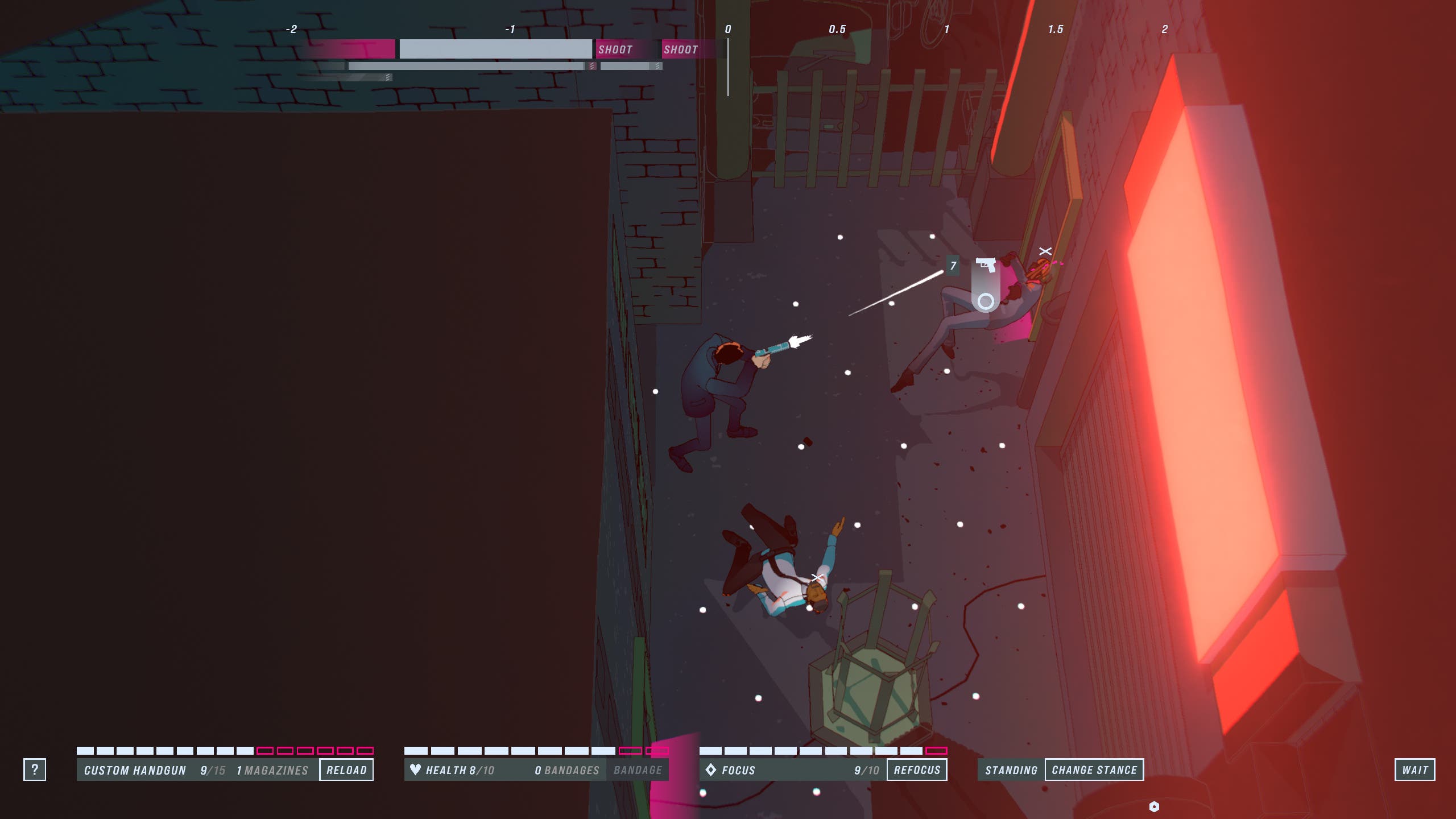 There’s two modes to choose from: Operator and Expedited. Operator is how the game was meant to be played, where Expedited is where you only have five seconds to select your next action. The former was my preferred method. The game introduces you to Hex, played by Troy Baker who looks like Kevin Nash. He’s taken Charon (Lance Reddick) and Winston (Ian McShane) captive, seeking revenge on John Wick. It’s a simple premise tells a story in the past, and through gameplay does it come into the present for the final confrontation. Across seven locations, and about five hours does it take you to see it through. It fits within the mythos of John Wick without doing or saying anything you wouldn’t expect to hear within the movies. It’s a rather abrupt ending as quickly rolls credits shortly after dispatching the final enemies, but it does the job.

As you progress from Chinatown to the Harbor, levels get just a bit longer to get through. They also get more labyrinthine as you move through each section. Oddly, there’s only level music that follows a certain theme. It isn’t music that fits the action, or non-action. New enemy types and more difficult enemies get introduced. There’s an aspect of progression as the opposing force gets strong and in more numbers. This is true exception for John Wick, who does not get new abilities or increased health. However, it stays in sync with the increased enemy presence because you get better at playing the game to match that. It won’t be long until you run out of ammo along the way. Enemies will drop guns, and the game’s careful consideration towards magazines means that you can’t just collect ammo, you’ll have to swap guns to get the most out of them.

Between locations, you’ll have Continental Coin to spend. It’s a currency that cannot be saved up, or undone once spent. This is used before starting the next set of missions. You’ll be able to purchase things that reduce the cost to perform a dodge, lower enemy hit chance, and more. The game is rather replayable, because the story is rather inconsequential to that. You’re able to replay locations as you wish due to the game having a small collectible element to the game, based on achieving “par” on certain actions to unlock a name. This is all tied into the ratings, for achieving par times and ultimately doing things better than what was set.

John Wick Hex doesn’t really have any technical issues, but not being able to remap controls, or set zoom sensitivity was bothersome. They aren’t large issues by any means, but feels strange to not have here. This is something that I think can be patched and updated, much like smoothing the transitions between animations to make the replay mode something worth watching.

The formula of this game is excellent for so many other applications in game that just isn’t John Wick. Slowing down a film series known for violence, speed, and momentum to thoughtful violence doesn’t work. John Wick Hex is far from a bad game, it’s just not as well… executed. Dissonance aside, the game offers a challenge through to the end, and isn’t insurmountable. The replay mode should be the highlight of John Wick Hex, but the stilted movement makes it a gag reel instead. So, if you can get past its issues and oddness, you’ll find an engrossing game of strategy and tactics where every bullet counts, and actually matters.