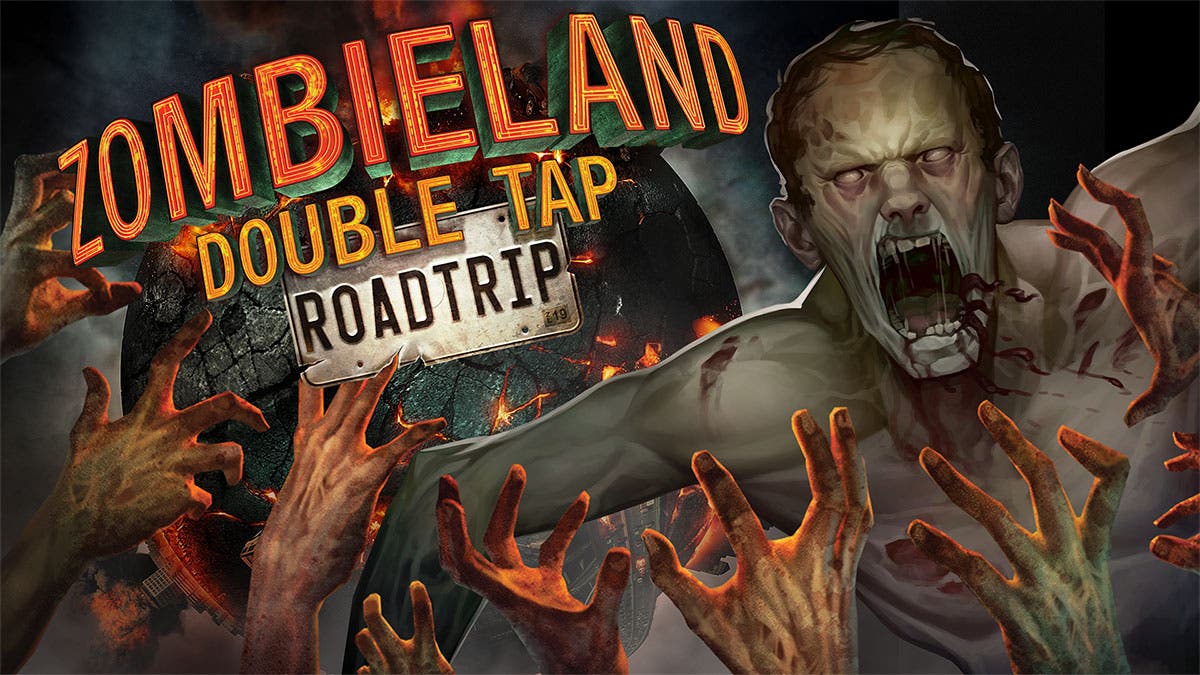 Video games based around movies have never really been a grand experience. Sure we have had some exceptions to the rule but normally we expect the worst. In some cases this works out to its advantage and players walk away surprised. Zombie land unfortunately leans more towards the sooner than the later. 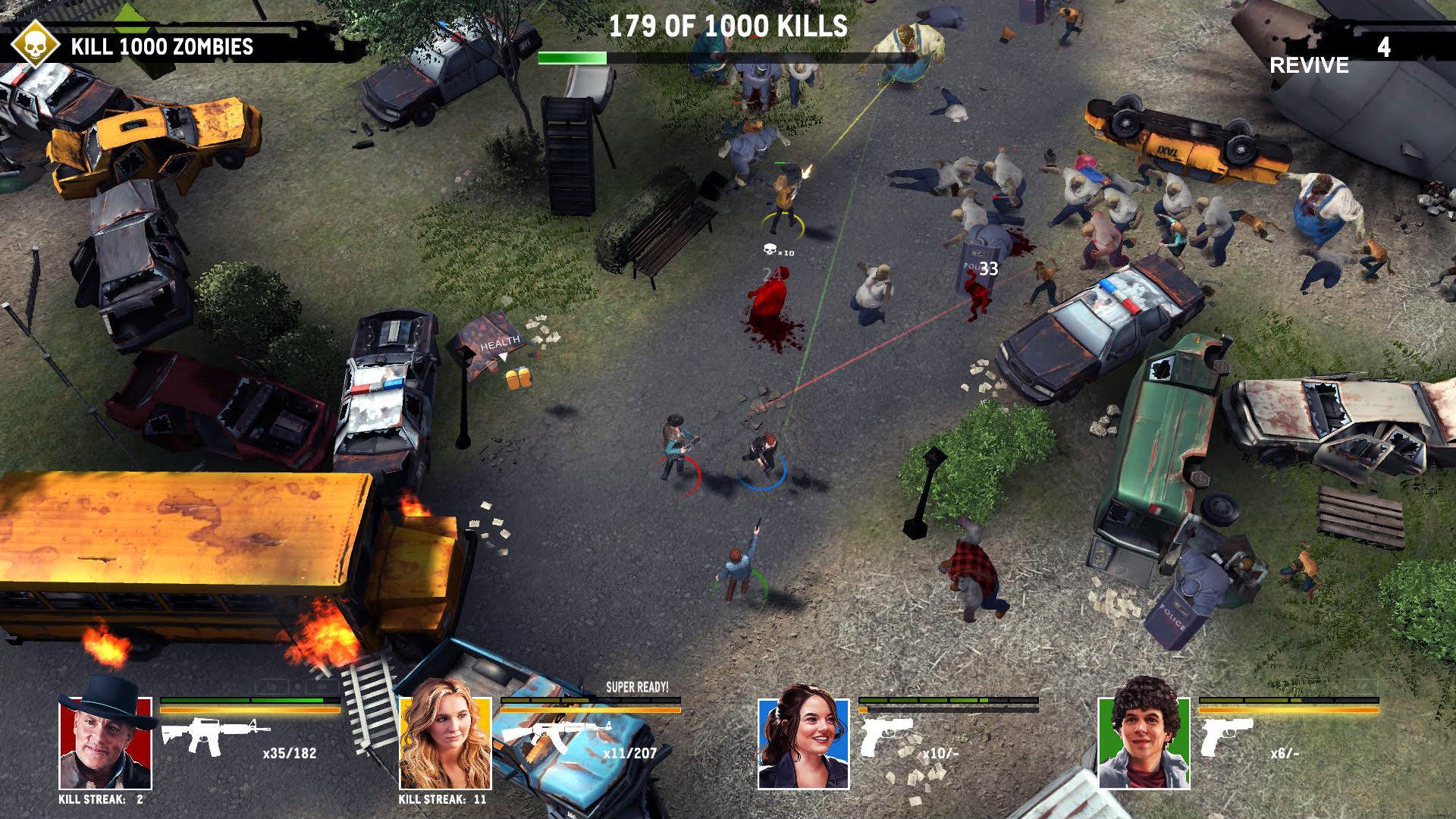 Zombieland Double Tap Road Trip, which is a mouthful, takes place between the first and second movie.  Over the course of the 2 hour or so campaign, players will travel with the gang to various states that offer one level of arcade twin stick shooter goodness. It’s supposed to bridge the missing element between the two movies, but if it is doing so, it really isn’t anything substantial. It’s not a long game by any means and it’s shallow in a lot of aspects. It reminds me of what you might find in the early 2000’s arcades. Movie based games, early 3D style visuals, based around putting quarters in, and having a few hours with friends. Maybe that’s what they are going for. 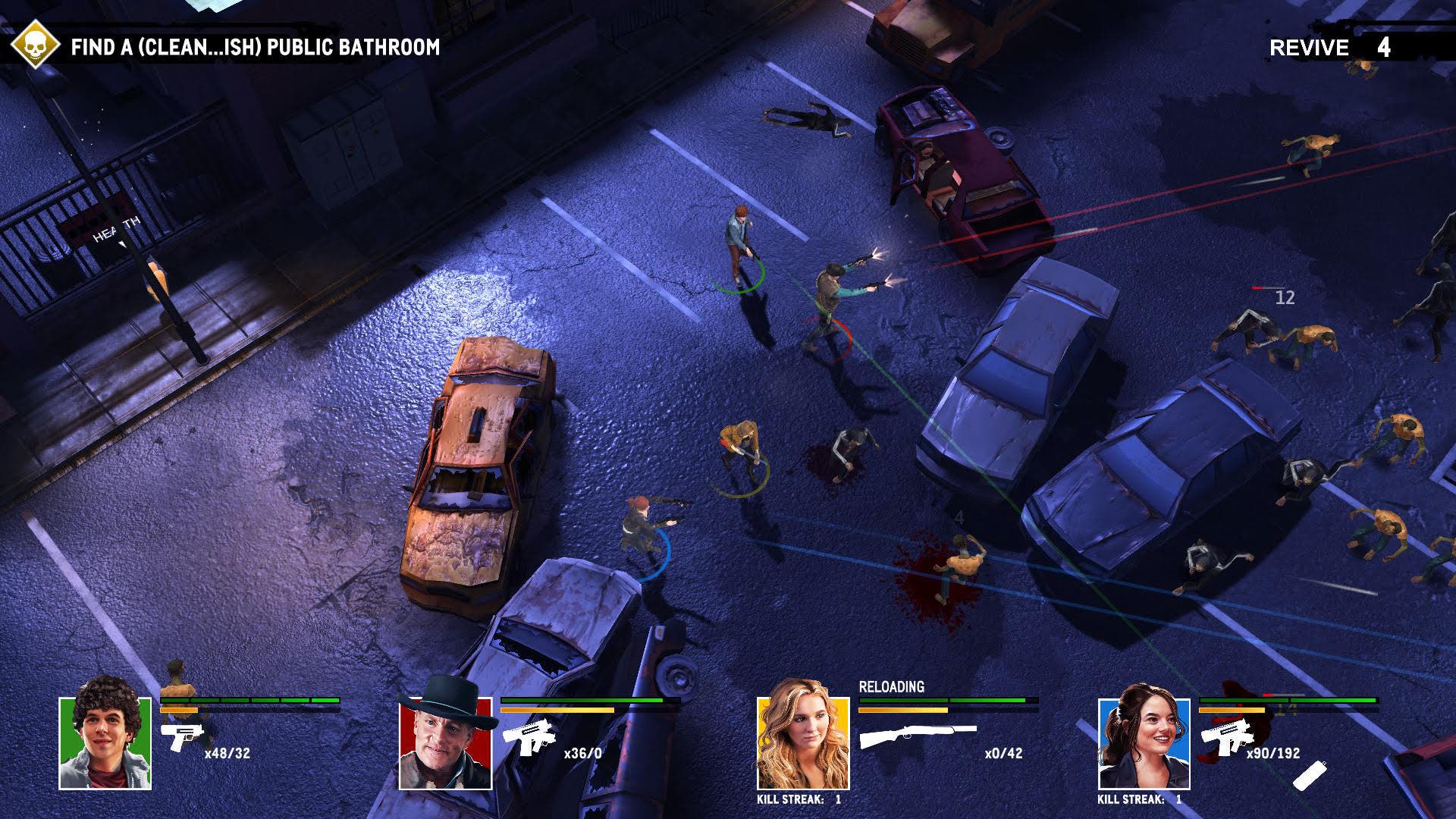 The games visuals are nothing to really brag about. Repeating textures, similar areas like towns, streets, stores. Nothing really sticks out on that end. Running through the levels usually has a fun mission objective like protecting a granny trying to make her way across town, or using the bathroom. The tone of the movie and idea behind its theme transfers over okay to the game and was a delight to see. Each character looks like their move counterpart, while the majority of the voice acting casts, sans one, are just imitating them. They do just an ok job, but again nothing sticks out and usually I found myself just wanting to skip those parts after the first few levels. 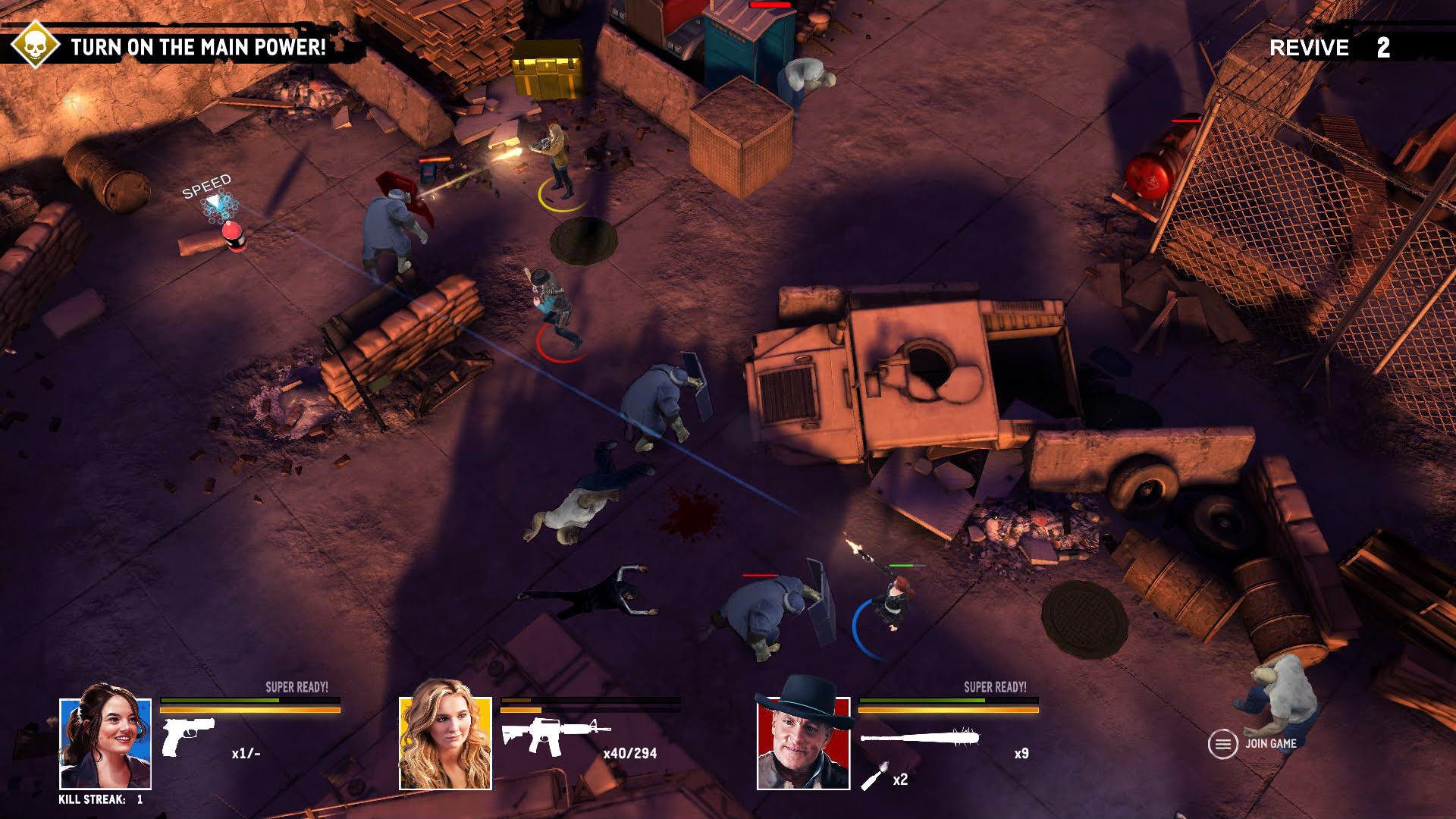 The action is the best aspect and lots of zombies will fill the screen. There is also a lot of unique enemies that get introduced along the way. With their own intro and characters bantering about them. That kept things a bit more fresh and undead like.  The top down shooting feels good and responsive, with players having one weapon at a time. Players can swap out for other weapons found in cars or crates, while also sometimes finding grenades or Molotov cocktails. Each character also has a special ability to use like slowing down time or takes a chainsaw and spinning around in a whirlwind of blood. There are also side missions to take on during the campaign and a separate horde mode which add just a little more different ways to fight more zombies. Characters can be leveled up also but it just comes down to spending skill points earned at the end of each level and only adds to overall stats. 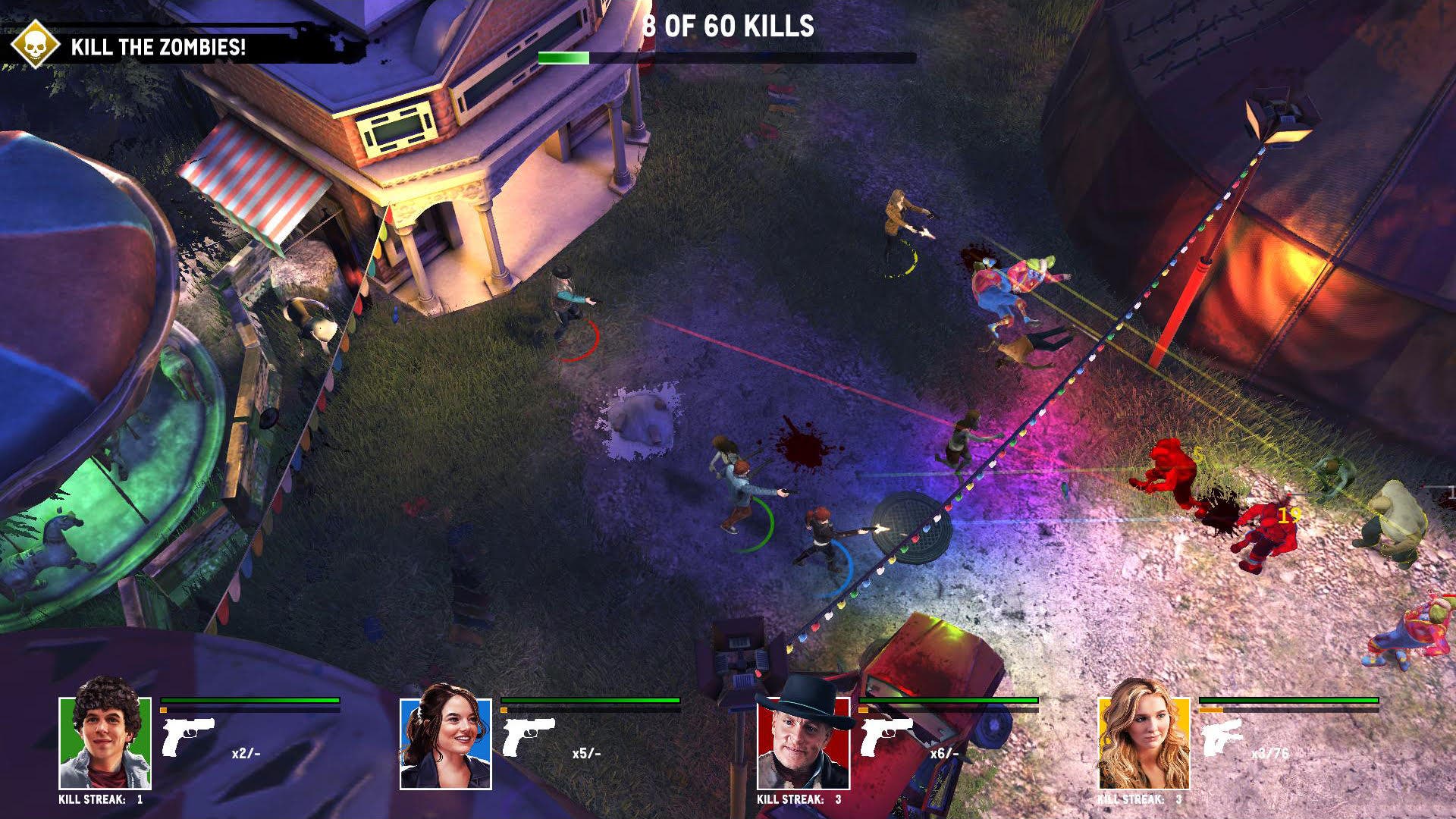 What we have here is a game that is short. Doesn’t look very good. Plays decent, and is better playing couch co-op. I have to say I had more fun playing this than say the recently released Contra Rogue Corps, but that’s not saying much.  The brief gameplay time is both a good and bad thing here. It prevented me from getting overly bored, but the price tag of $39.99 makes this one a hard one to swallow, even for hardcore fans of the genre or zombies. Nothing here is completely broken or offensive, it’s just so lackluster and basic it hurts what could have been a bit of a fuller and funnier experience.