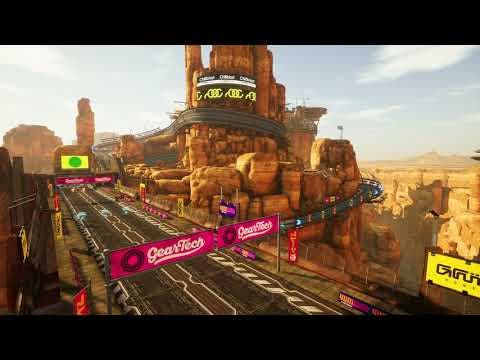 London, UK – Tuesday 4th August: The start line is in sight for R8 Games’ high-octane anti-gravity combat racing game PACER. Coming to the PlayStation®4 computer entertainment system and PS4 PRO, the Xbox One family of devices, including Xbox One X, and PC via STEAM on September 17, 2020.

PACER is an explosive anti-gravity combat racing game where players can race in a variety of single player modes or with up to 10 players via online multiplayer.

“PACER is the fastest and most explosive game of its kind and we’re super proud as it prepares for the start line,” said Steve Iles, Senior Producer, PACER. “Whether you’re into single player campaign play or inviting all your friends for multiplayer mayhem, it’s all here. Or if you’re daring and like a challenge, try our thrilling Battle Royale inspired mode, ‘Storm’.”

2075: The PACER World Championship has become the new apex of anti-gravity motorsport, delivering high-speed racing across the world’s most dangerous and challenging circuits. Corporations from all over the globe race against each other in a battle of technical and piloting prowess with the aim of winning the championship and achieving ultimate victory.

Engage in high speed combat racing to an incredible soundtrack, featuring original tracks by CoLD SToRAGE, and an extensive licensed library including Dub FX, Ed Harrison and many more.

PACER is part of the Xsolla Funding Club, a matchmaking service connecting video game developers with investors at no cost. The game has also integrated multiple Xsolla products from In-Game Store and Player Inventory to Partner Network and Site Builder, to help market and launch the game across all platforms.