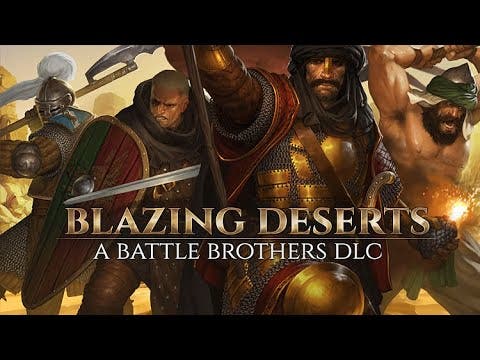 Overhype Studios is happy to reveal a new trailer showcasing the largest and most ambitious DLC for Battle Brothers. ‘Blazing Deserts’, the new DLC for the acclaimed tactical RPG Battle Brothers, will be released on August 13th for $14.99/€14.99 (check Steam for regional equivalents). To celebrate the release, Battle Brothers base game will get a 67% discount while the two prior DLCs (Beasts & Exploration and Warriors of the North) will get a 10% discount from August 13th to August 20th. The ‘Blazing Deserts’ DLC for Battle Brothers expands the game with new lands of burning deserts and lush oases to the south. In its new trailer, voiced by Roger Clark (Arthur Morgan in Red Dead Redemption 2), you can get a glimpse of what awaits you in the south.

Visit independent city-states, fight in the arena, face desert raiders and southern beasts in battle. Wear new gear inspired by Arabian and Persian cultures of the medieval ages, employ alchemical contraptions and primitive firearms, and forge your own path when the fires of religious turmoil threaten to engulf the world in a new late-game crisis. But the new content of Blazing Deserts does not limit to the south, as new features such as the new environments for fights will also be found in the north (see screenshot below). If you want to learn more about the DLC, you can check the dev diaries discussing its new content on the Steam page of the game.