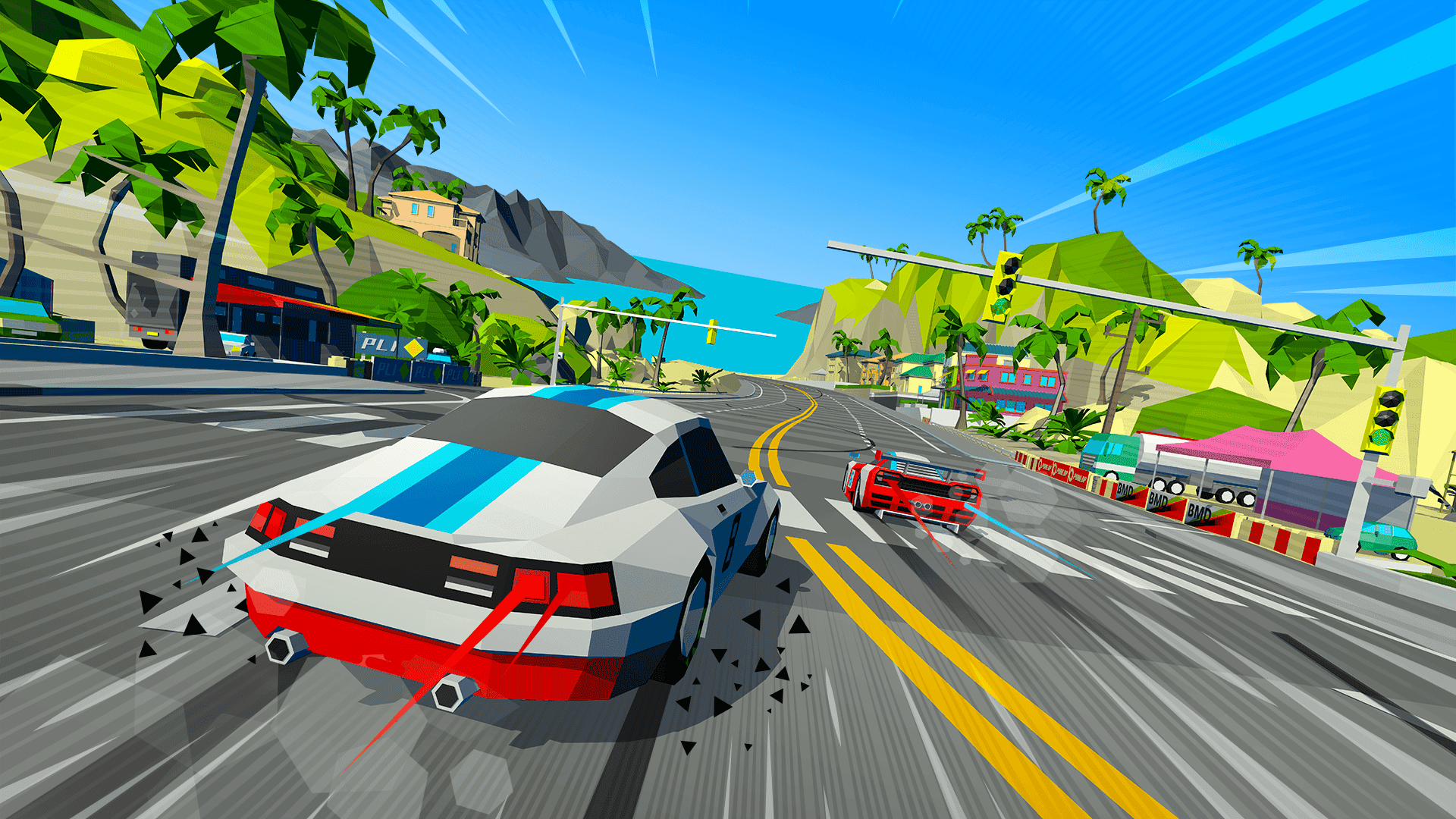 Hotshot Racing has these early 90s SEGA vibes like SEGA Rally and Virtua Racing, but the performance issues hurt the sense of speed and feeling that it's going for. The modern-retro look and feel works well with the low-polygon environments and cars, yet crisp textures and no aliased edges. The racing itself offers different styles for all kinds of players, and the boost mechanic is really clever. Hotshot Racing lacks the overall staying power of more modern racers, but it's sure to occupy your time online and off.

Pop quiz, hotshot. There’s an explosive device on your car. Once the car starts racing, the explosives are armed. If you’re last across the line whenever one else goes, it blows up. What do you do? What do you do? Well, Hotshot Racing isn’t “Speed”, but it has a lot of it – and even a literal ‘Drive or Explode’ mode. This is a game with a lot of kinetic energy, colorful looks, and evoking the 90s with passion. It’s a shame then that performance oddities and lack of singleplayer content hurt the overall product. Hotshot Racing manages to be a lot of fun, where its longevity is driven by unlockables and its multiplayer. 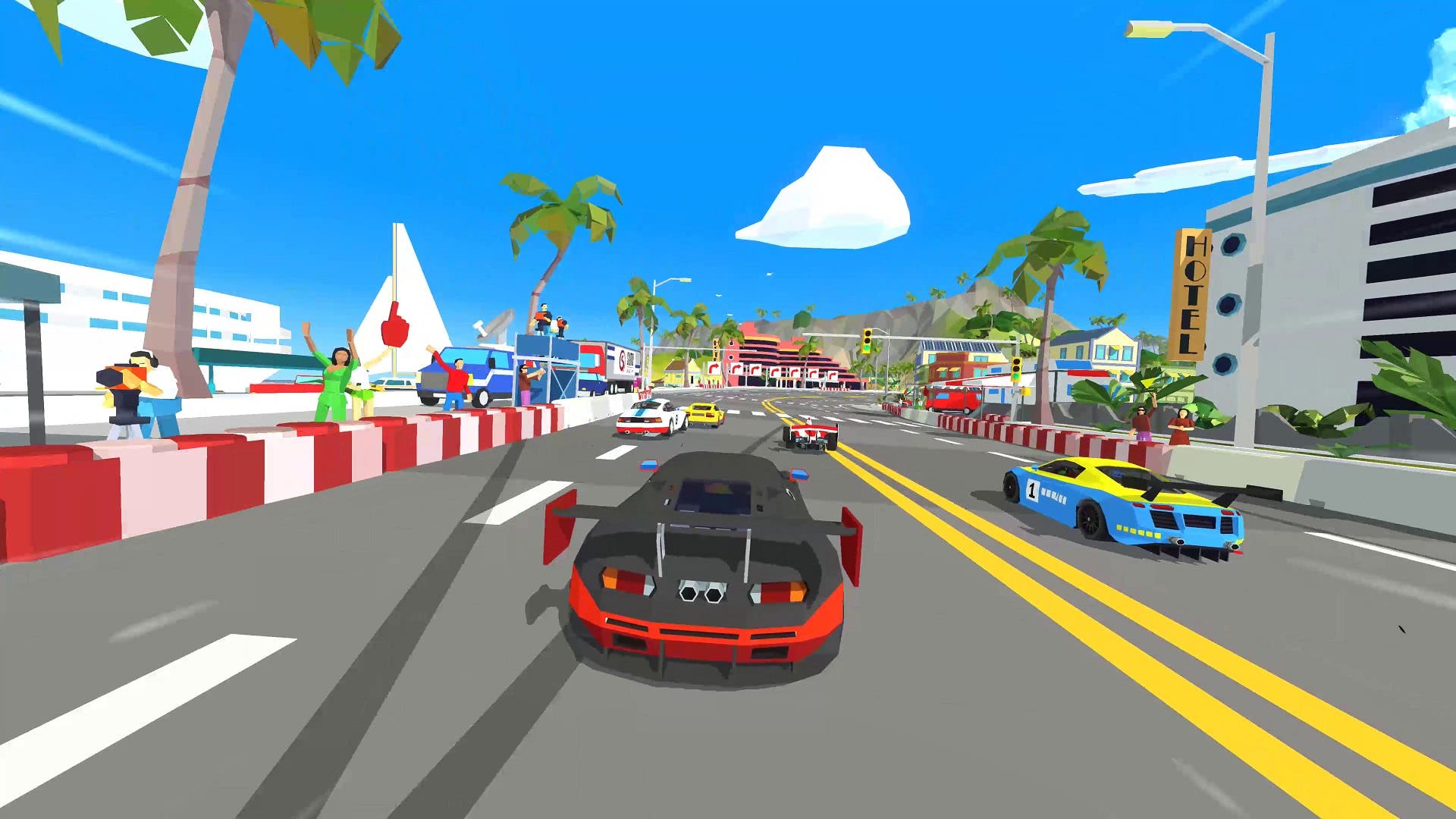 Hotshot Racing has several modes to get started with: grand prix, single race, time trial, and multiplayer. The grand prix serves as the game’s bulkiest singleplayer offering. With four of them to complete, each with their own difficulty: normal, hard, and expert. You can earn bronze, silver, and gold trophies for completing them, and that’s about it. Single race and time trial fill out the other modes and singleplayer offerings.

You’ll find eight characters in total: Alexa, Aston, Keiko, Marcus, Mike, Toshiro, Viktor, and Xing. There’s little opportunity for their personalities to show through, but if you complete a single grand prix with each character, you’ll get a special ending for that character that depicts their future. It’s a neat way to tie things up in a pretty bow. 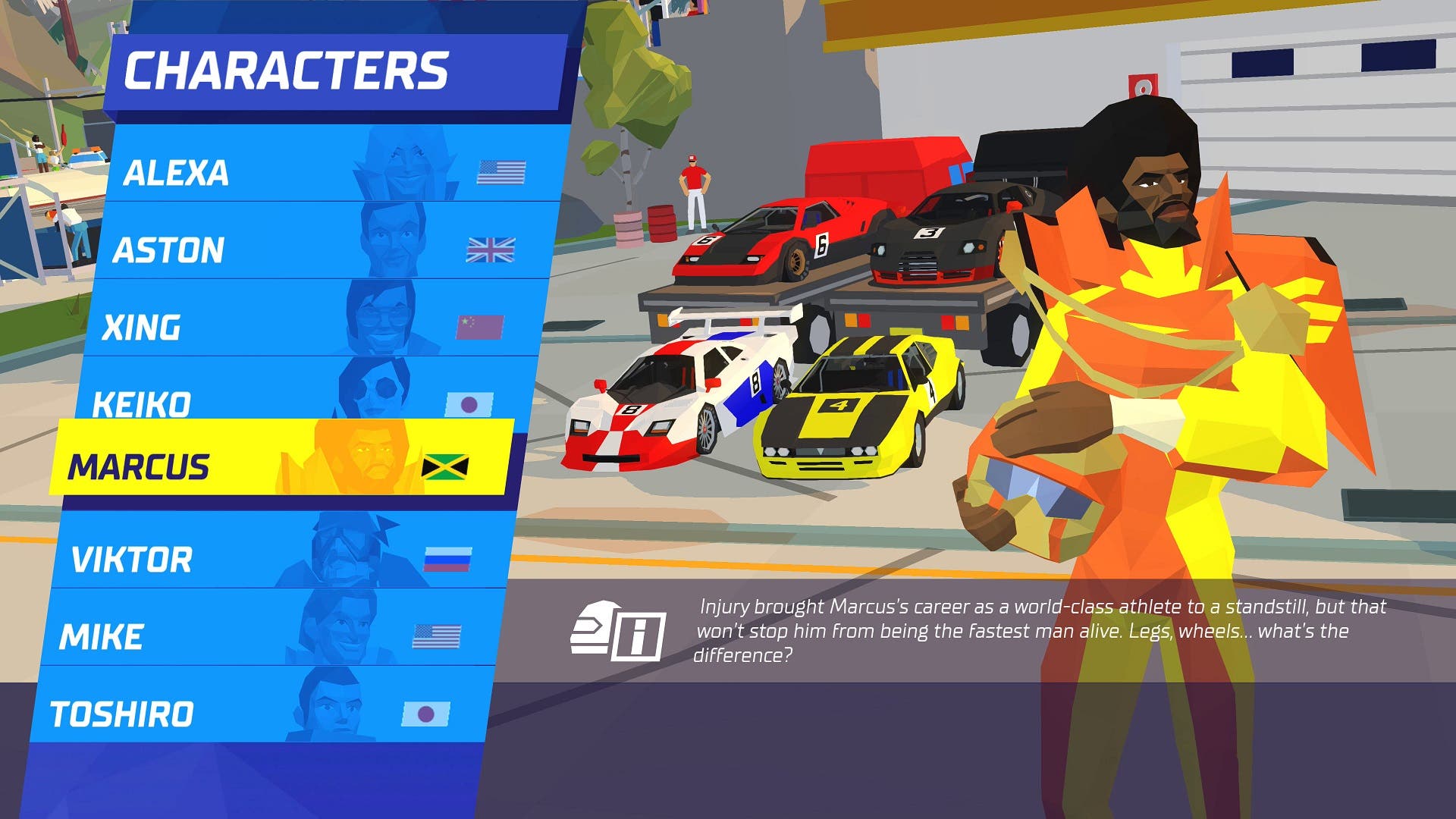 There are four racing disciplines for the cars: speed, acceleration, drift, and balanced. I found that drift is the most rewarding and you’re more inclined to drift on any of the circuits as it feels the most natural. It’s also easiest to build boost. You can also earn boost by slipstreaming. You can hold a maximum of four segments of boost. The speed category of cars has full nitrous boost from the start, and can be refilled. There are four different cars for each of the eight drivers, making it a whopping 32 cars total.

There are a total of sixteen courses to race on, across four locations of the coast, desert, jungle, and mountain. They are unique, and diverse within a single biome to not feel repetitive, but only slightly. I just wish there was more, it doesn’t seem like enough. However, it does allow you to learn them for more competitive races in split screen and online. 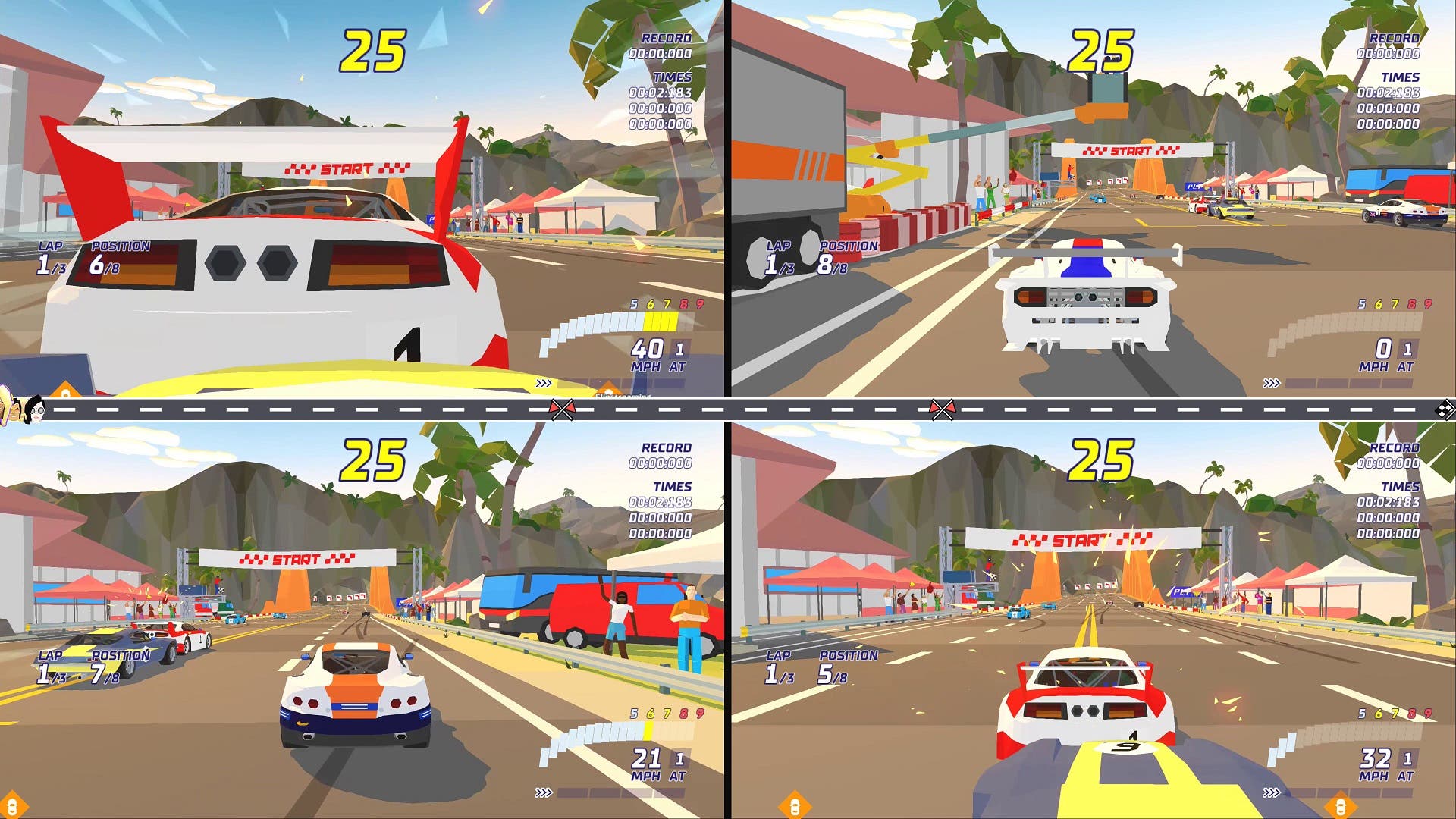 Hotshot Racing has a surprising amount of depth to the unlocks. You play races or grand prixs to earn money, and focusing on a single car or character will unlock items for purchase in the raceshop. These cosmetics are for both the driver and the car. The car has palettes, car parts like hoods, bumpers, wheels, headlights, dashboards, and bobbleheads. You’ll have to do this essentially thirty-two times to get everything unlocked. You’ll then use your hard-earned money to purchase the cosmetics you unlock. The drivers are similar, but far less options, mainly color scheme changes.

There are multiple camera views in the game, and the cockpit view is the most surprising one. It feels more like a novelty than having an actual, functional purpose. It reminds me a lot of the arcade game, Hard Drivin’ with its inclusion. It’s a viewpoint I’ve not seen many games of this era tackle, but it’s appreciated for sure. 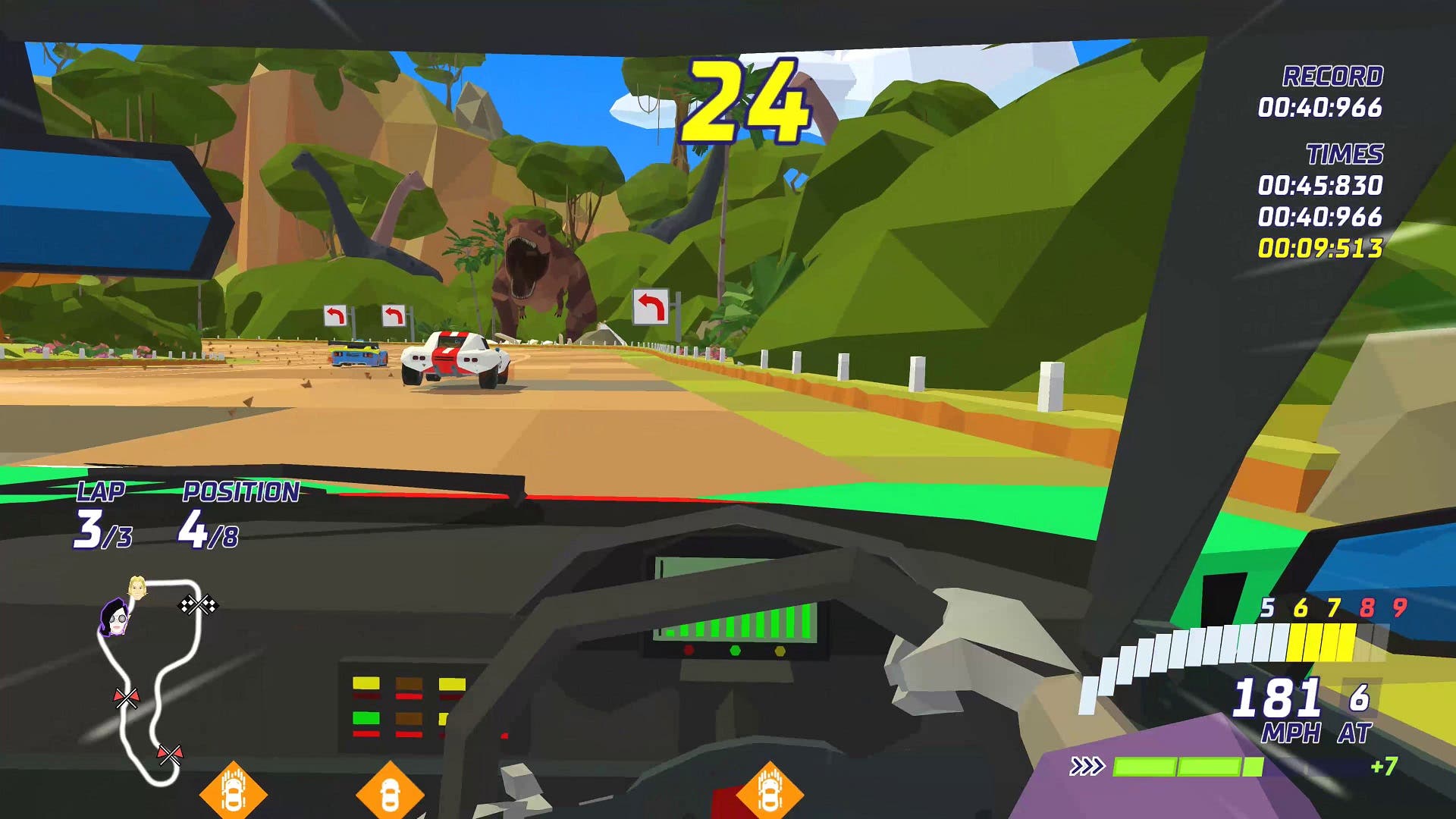 The actual racing consists of completing laps, and going through checkpoints in order to replenish a constently ticking timer. If you run out of time, you can coast across the checkpoint, where time gets added and you’re able to continue to race. It’s a very specific design decision from games of the 90s that has gone away, but I’m really happy to see it return. Another interesting note is that the game’s music tempo increases with each lap until you cross the finish line, another subtlety.

The multiplayer mode lets you host or join a custom game, played ranked matches, or join a quick race. This seems to be the game’s true focus. Supporting up to eight players, you can three different modes. Arcade is the core game, and what you experience in the grand prix or single races. Cops and Robbers puts AI cops on the road, and you must escape them, or survive due to the car taking damage to win. Then there’s Drive or Explode, a mode where it’s elimination style racing, and last across the finish line blows up until one remains. Playing these modes were always fun, and never boring. 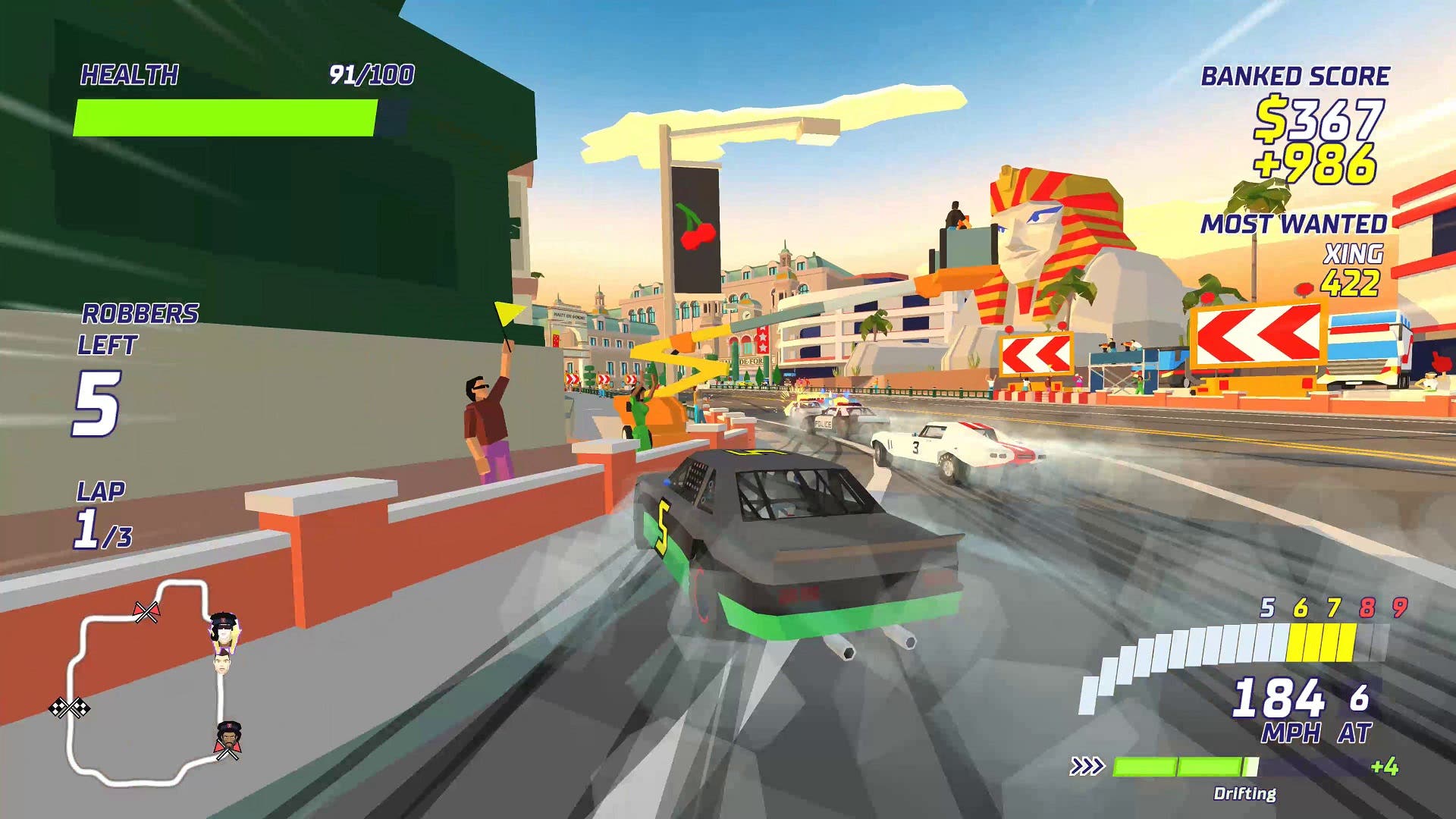 Hotshot Racing has some weird framerate / consistency issues. While I never saw my frame counter dip below 165fps (the refresh rate of my monitor), the game slows down when a lot of action is on-screen. Either the effects are rendered at or have a lower maximum framerate, or something. While I can’t explain what’s happening, the appearance of the game looking slowed down, choppy, and otherwise not right is cause for concern. 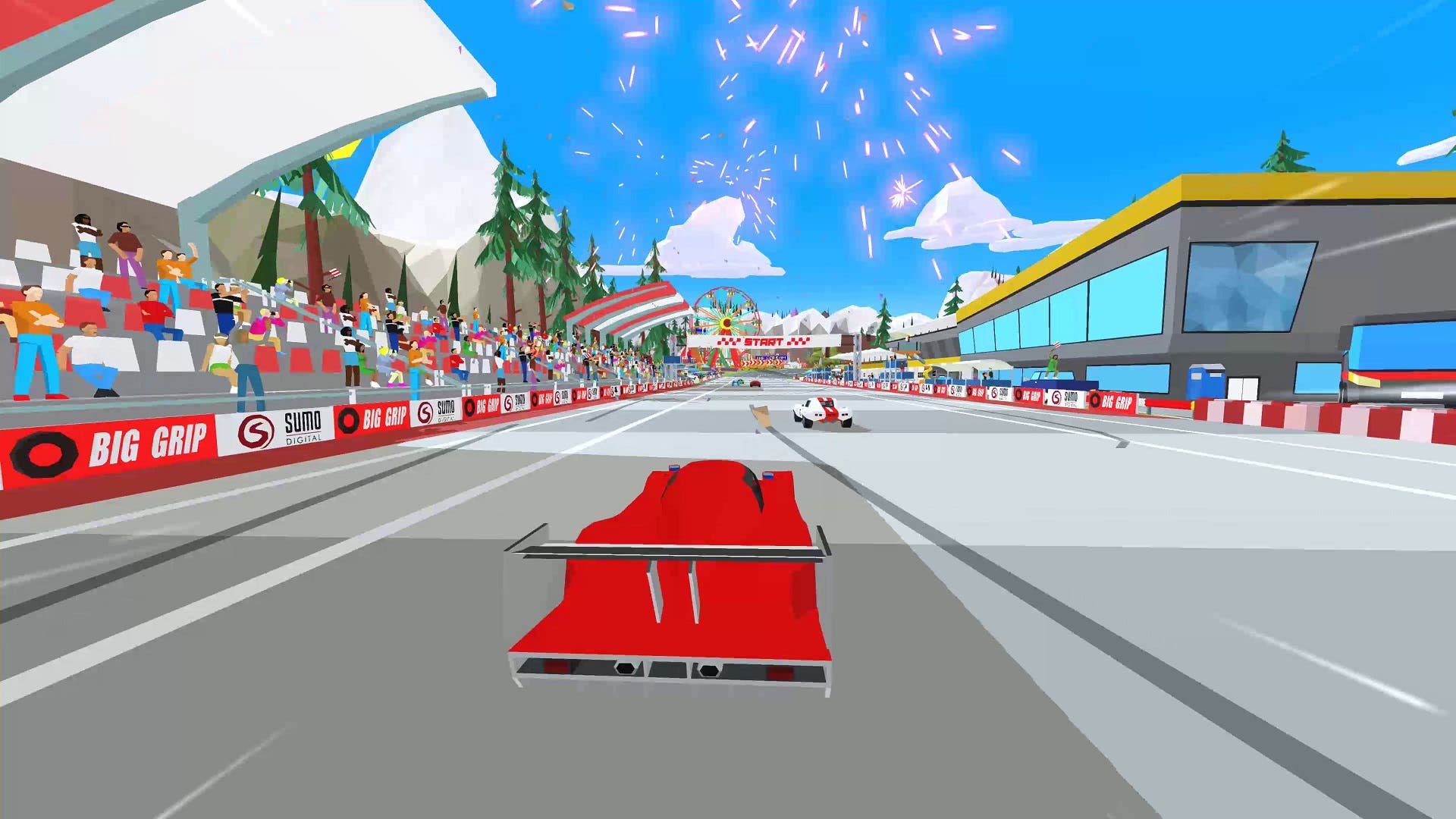 Hotshot Racing has these early 90s SEGA vibes like SEGA Rally and Virtua Racing, but the performance issues hurt the sense of speed and feeling that it’s going for. The modern-retro look and feel works well with the low-polygon environments and cars, yet crisp textures and no aliased edges. The racing itself offers different styles for all kinds of players, and the boost mechanic is really clever. Hotshot Racing lacks the overall staying power of more modern racers, but it’s sure to occupy your time online and off.