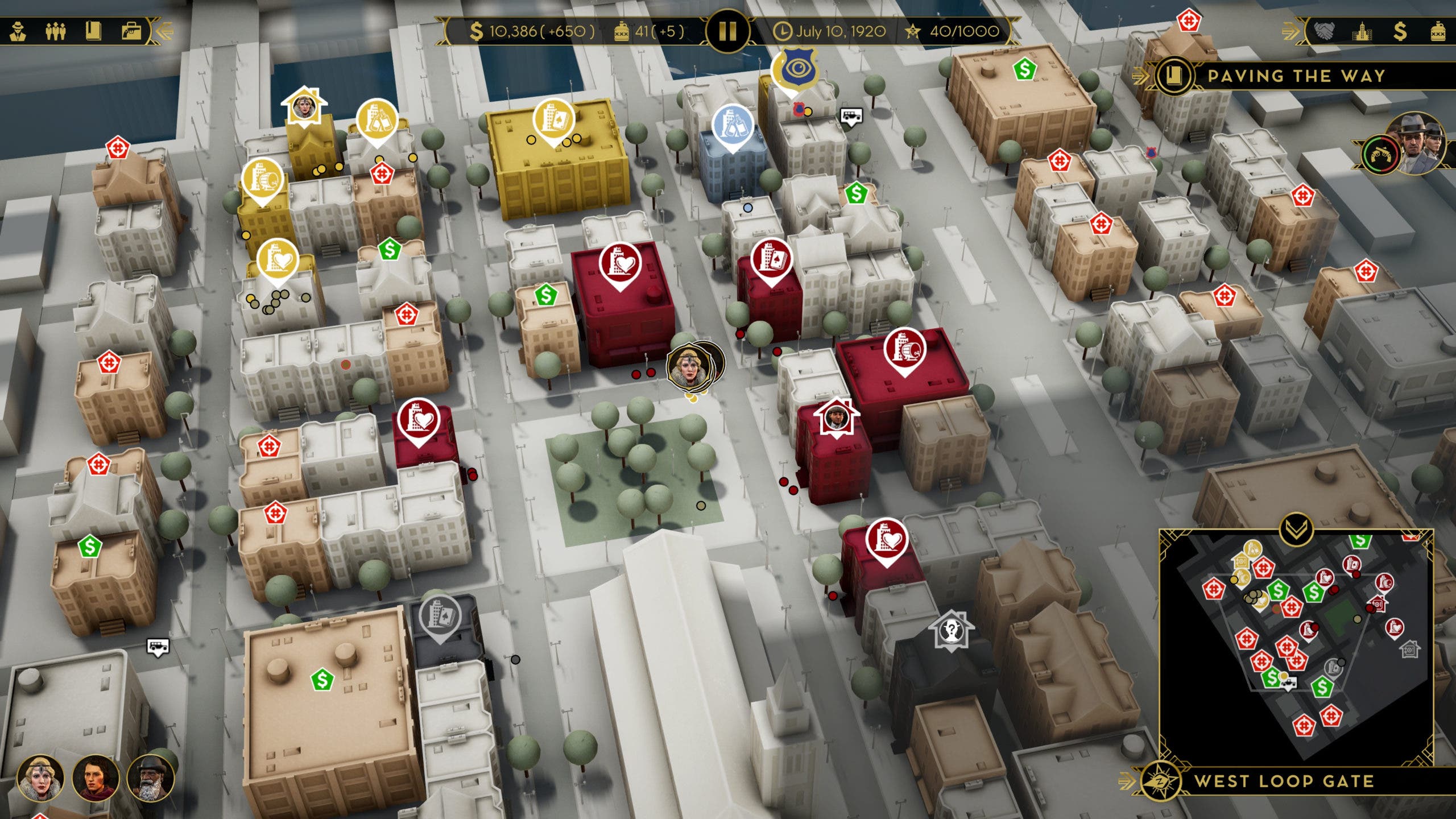 Taking place in 1920s Chicago, you select one of fourteen mob bosses to takeover using rackets and any means necessary. There’s a single win condition, and that’s to wipe out all opposition. Empire of Sin is like a roguelike of sorts, it’s essentially all ironman mode except that you can save scum your way through it. You can customize the number of neighborhoods available, from three to ten with the number of enemy factions at a minimum of six, and whatever difficulty you find to match your skill. It can be as shallow or as deep as you make it. There’s certainly less spinning plates without more factions to contend with, but you’ll likely draw more attention as a result. Each playthrough will take around seven to nine hours, depending on the game settings, but it encourages replayability and different strategies.

You get to play as real-life mob bosses Al Capone, but there’s also a string of fictional ones like Goldie Garneau. The game is evenly split between real and not across the fourteen playable mobsters, giving you a sense of role-playing when you select one to play. Each mobster has a story, and that will unfold over the course of the playthrough, complete with cutscenes and unique missions. I chose Dean O’Bannion first, and his story had me finding out a clergyman I’d looked up to was a pervert and adulterer, and I ultimately had to whack him, or force him out of the city. These kind of decisions can have long-term impacts on you and your crew. The game’s missions help guide the player in what could be considered too aimless, and I appreciate that there’s even a story to tell that doesn’t rely entirely on emergent gameplay. 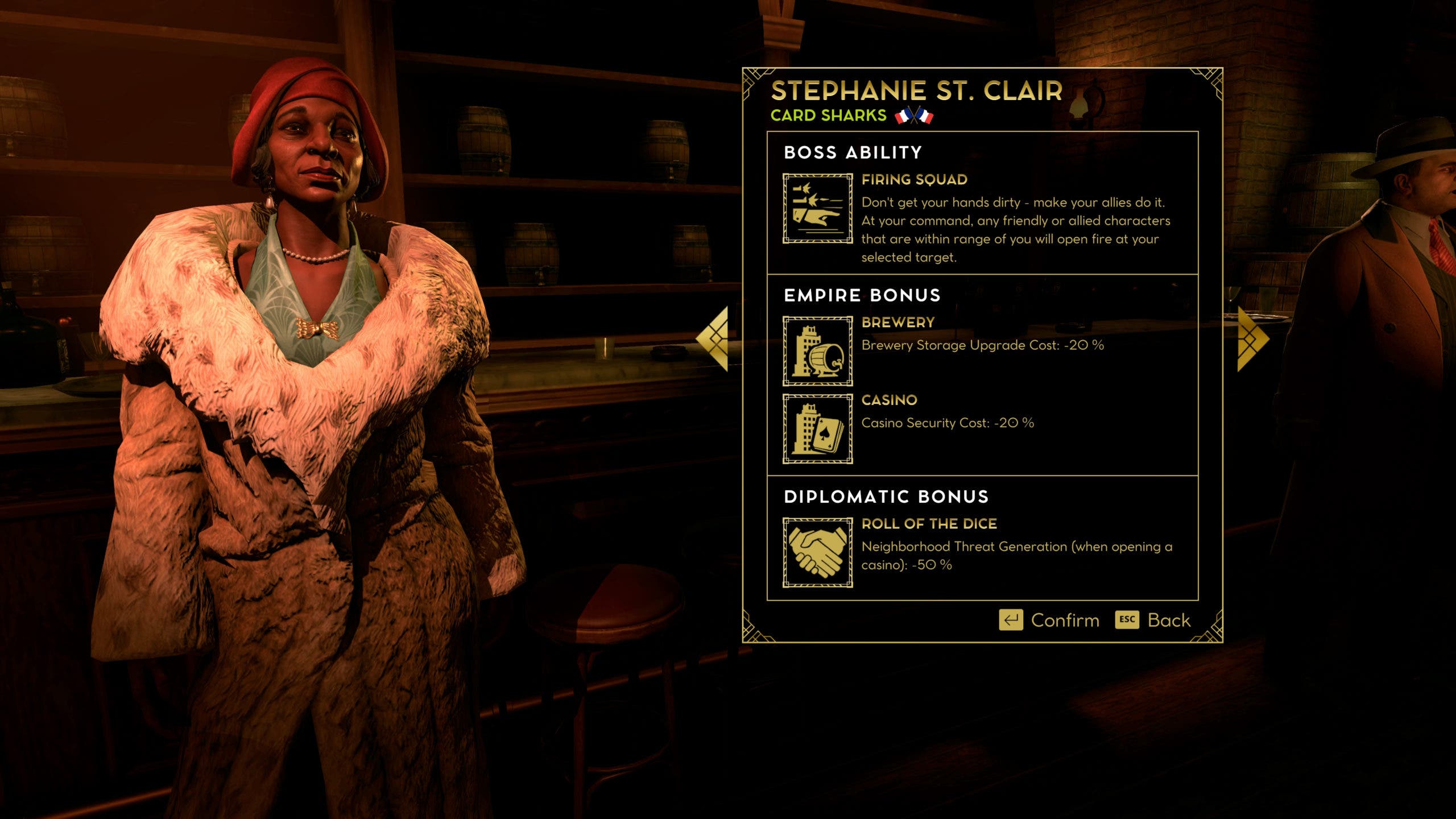 You’re bound to piss someone off. Whether its hiring goons to expanding your reach, someone will take offense to you or vice versa. It’s here whether you enter into temporary business arrangements with other gangs, have sit downs for introductions and other conversation, or all-out war with one another. Diplomacy is a factor that can go a long way, but there isn’t a way that you can be friendly with all gangs and just hope it works out. Someone has to die, and it can’t be you.

Empire of Sin runs almost everything in real-time, with the exception of combat which is turn-based. When you get your weekly earnings, that’s 12 seconds for one day, and one minute in real-time to go by. This is helpful when waiting for certain payments, especially if you’re low on money. You can pause the action to make certain decisions to not let things go by. When you engage in combat, you’re presented with a square grid of familiar territory. Each character you control has their own health levels, action points, and unique characteristics that make them helpful in a fight. Characters can go down but not out, unless they executed or killed outright. And if that happens, they are gone for good. You’ve got your standard fare of standard attacks, special attacks, overwatch, taking cover, and the like. There’s some XCOM-level misses in this game, meaning that even at close proximity with a high chance to hit, you’ll still miss your shot. It’s frustrating when it happens, but you do get used to it. 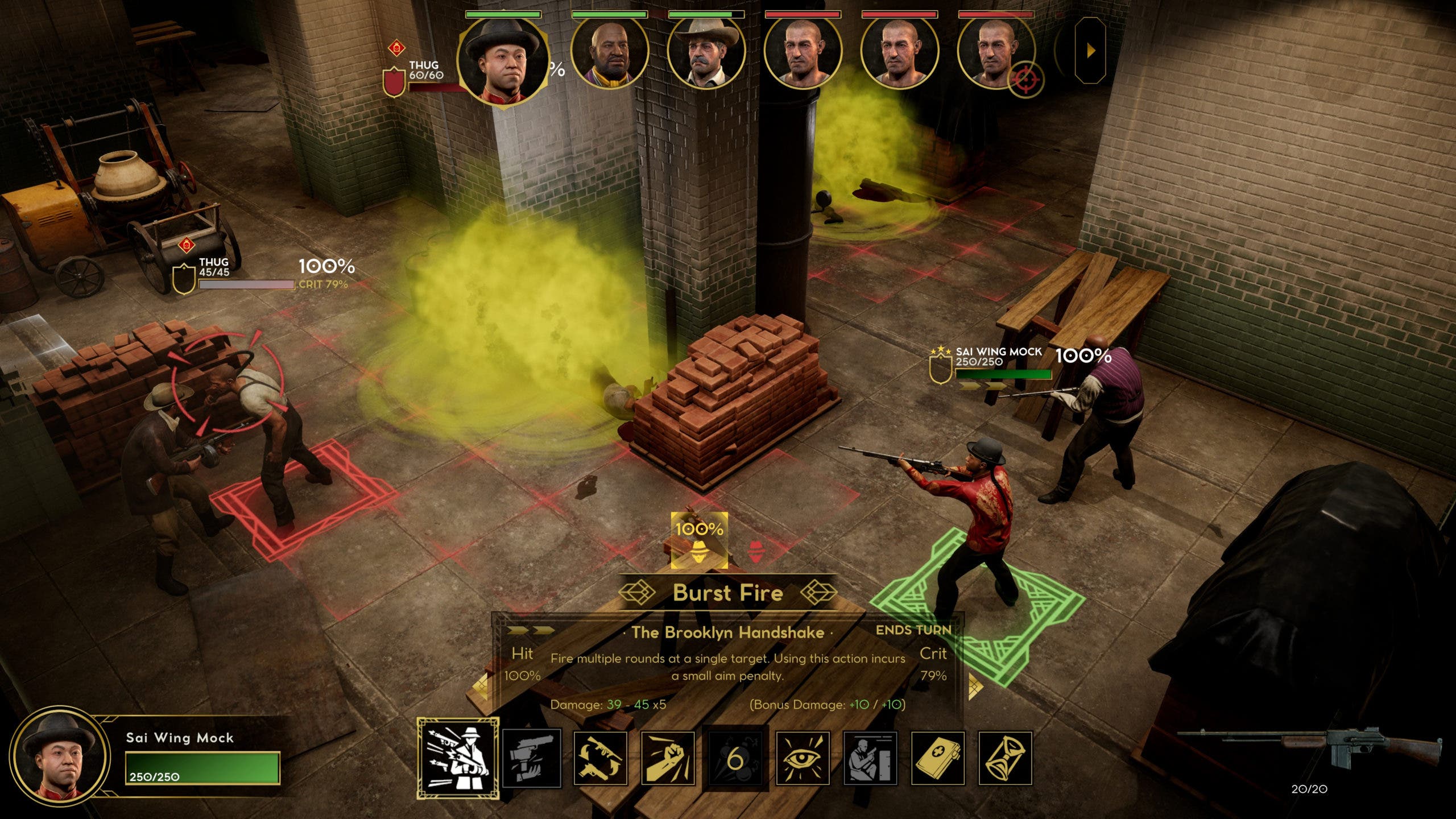 Hiring an effective crew is another element to your success. George”Bugs” Moran made an appearance in my game, and while he rose pretty high up in the streets of Chicago, he can was just a side character in the game. Crew, goons, lackeys, whatever you call them, they each have morale and loyalty unique to themselves. Each one has one of five professions: doctors, hired guns, enforcers, con artists, and demolitionist. There’s also relationships in terms of people that they will and won’t work with, so you have to hire wisely. They can even take on negative and positive traits, like being an alcoholic or having a hair trigger temper, respectively. If they get hurt in combat, they’ll be put on the injured list and have to sit out. They can even fall in love, one of my guys fell in love with the enemy’s wife. A sticky situation, to be sure.

Safehouses are a haven for you and your crew to retreat to, or to otherwise regroup. Safehouses also serve as a fallback brewery in case the player has a string of bad luck. To expand your empire to the fullest, you’ll need to run a racket. In most cases you’ll attack a building for takeover, ransack, smash up, or raze. Each option different than the last that can help you, but takeovers will be the most common. You can buy them if you’re swimming in cash, but early on you’ll take them by force. Every racket, whether it be a brewery, casino, or speakeasy, you can upgrade them for better security, deflect opposition, provide better ambience, or draw more customers via word of mouth. Though you have to be careful as your successes will draw the attention of police, and so you’ll need to bribe cops to get them to look the other way. All rackets don’t need alcohol to be successful, but you will draw more customers if it has a steady supply running through it. 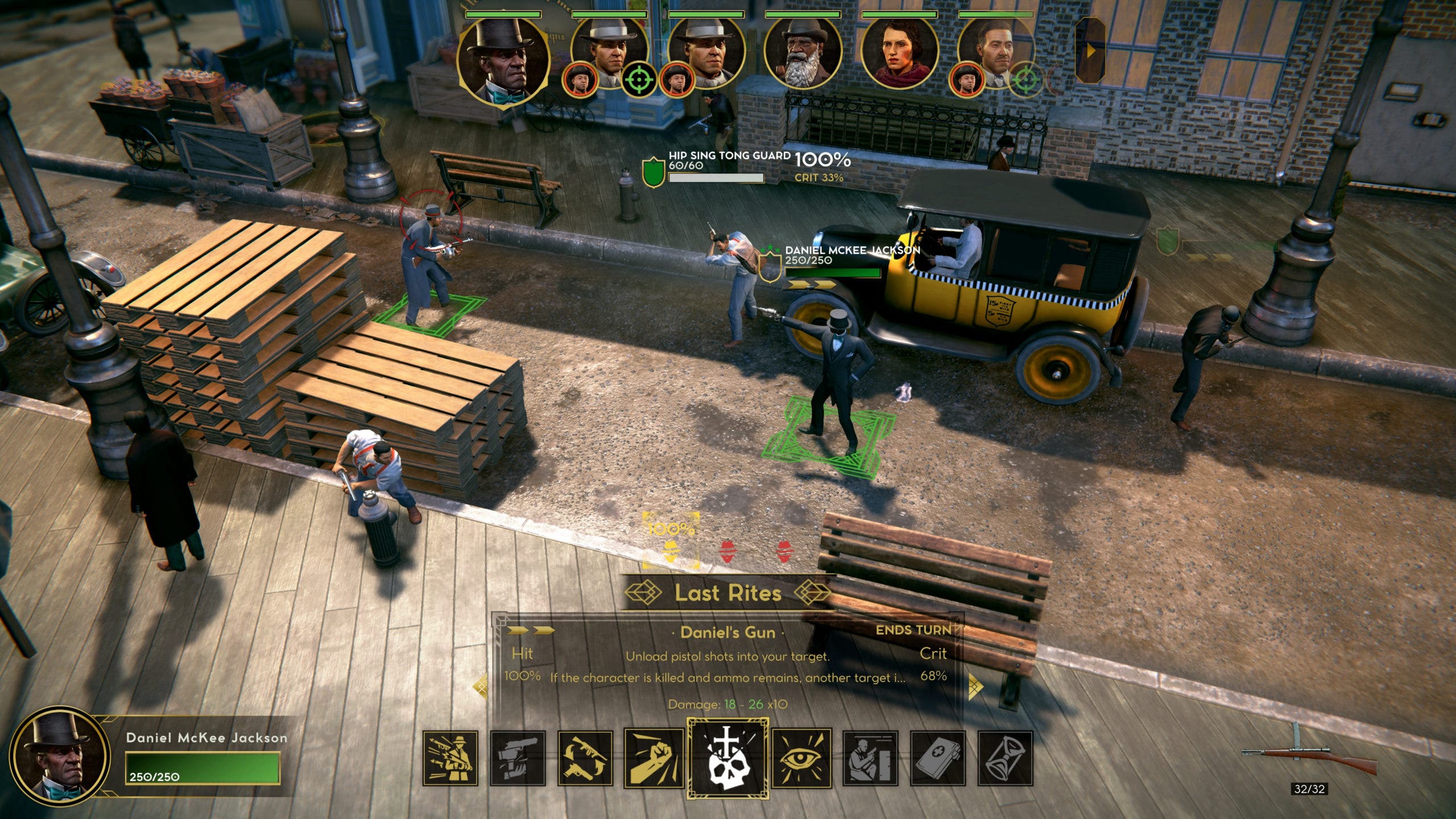 The max notoriety you can attain is 1000, and it drives the ability to hire goons and other actions. There’s a weapons market to buy from and sell to, which helps move money around. You can equip weapons and items on each of your crew members, and weapons even have rarity. The higher the rarity, the more reliable that weapon will be in combat. However, if at any point things get too tough, you can escape a fight to save the people and the gear from being lost for good.

You are able to select talents for your crew to earn. In a neat twist, it takes time to learn talents, so it’s not an immediate effect. It feels a bit like a Civilization game when you select a research item or are constructing a monument in this way, as it takes around a month for these to complete. You can also take loyal members of your crew and promote them. Selecting underbosses will allow you to not be so hands-on with everything, and let them do your dirty work from safety. This can prolong your life, and reduce the need to load a prior save. There’s manual saving and auto saves, but no option to quicksave currently. 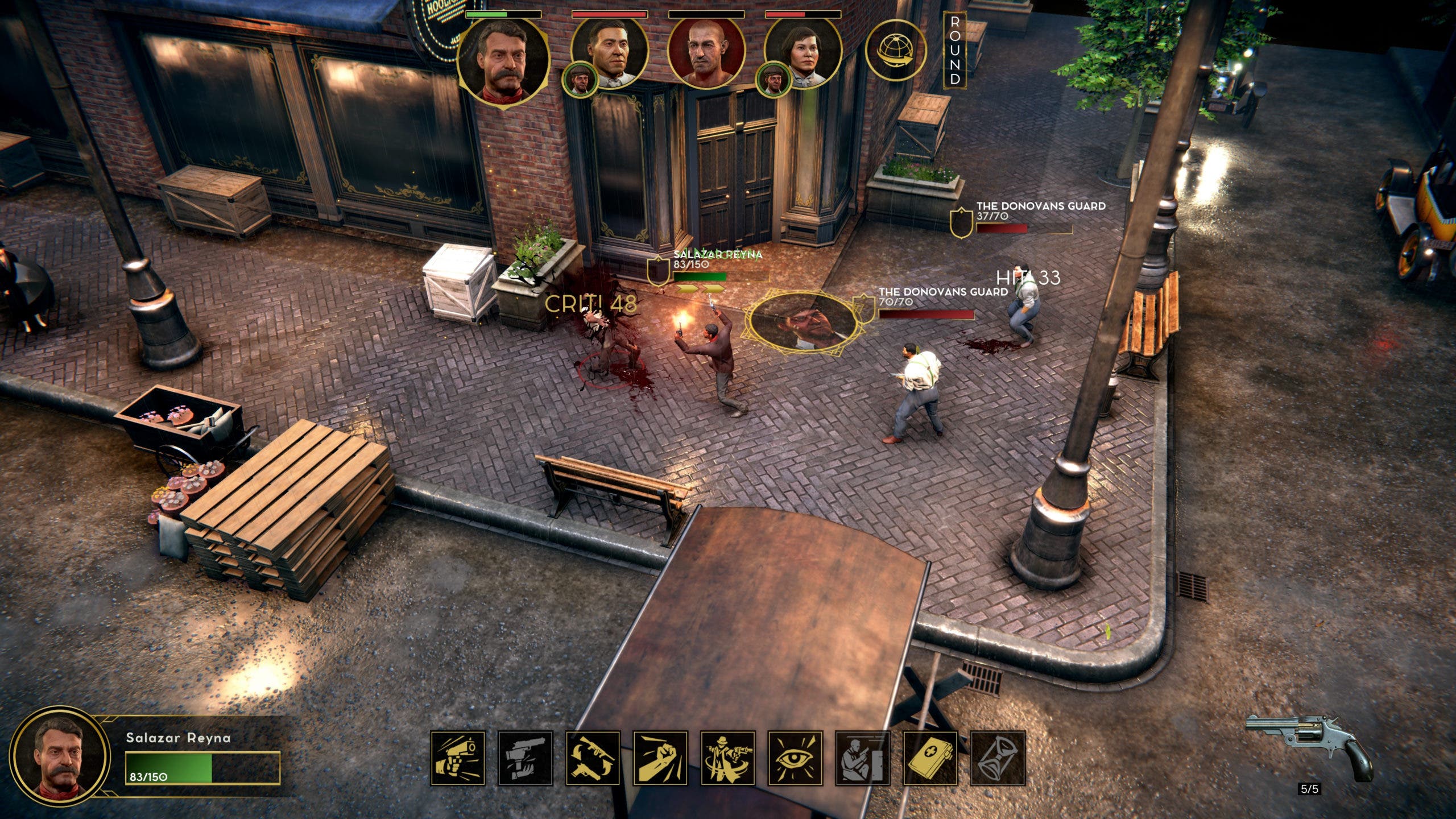 Empire of Sin is a beautiful game, with gorgeous reflections from rain-soaked streets and detailed character models. It does have some clumsy animations, odd ragdoll effects, and a good amount of bugs. I’ve had people disappear, I’ve been locked into situations I can’t continue, and other oddities that have forced me to revert to a prior save. The conversations in sit downs have some stiff animations, but is fully voiced making it really entertaining to partake in, as well as a healthy dose of profanity. I think a lot of the issues I encountered can be fixed, but rolling back to a previous save is no one’s favorite. 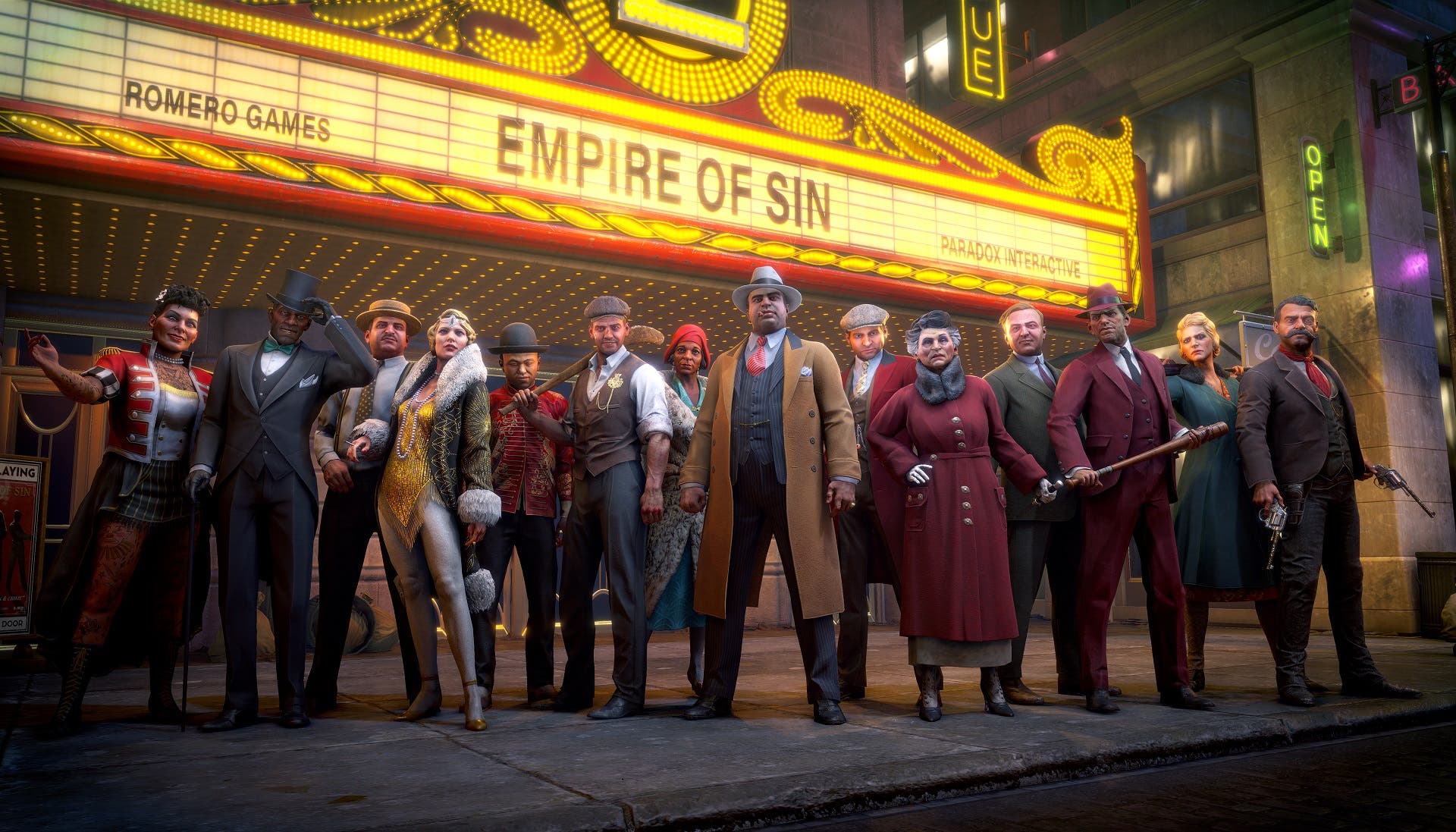 While Empire of Sin is not the first to tackle the era or the setting, but it is the best realized version out of any of them. There’s a few bugs to be rid out by Romero Games, but what exists is not detrimental to its enjoyment. Becoming something from nothing is no easy task on the streets of Chicago, and there’s plenty of views and systems to understand where money and resources are going, and how to improve your rackets if they’re not performing well. There’s exciting possibilities for DLC and expansions, but the existing roster will keep you busy well into next year. Empire of Sin blends several genres together for a mafia game that’s infinitely replayable.