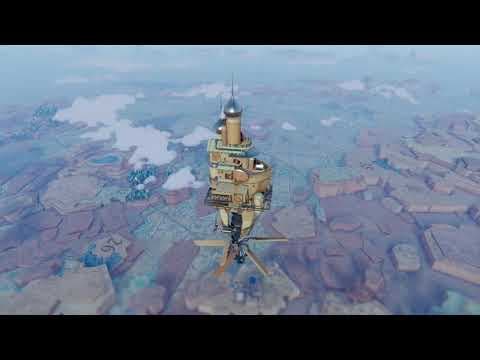 Unique city-builder, Airborne Kingdom takes to the skies on PC via the Epic Games Store today

December 17, 2020 — Airborne Kingdom, the sky city builder, is out today from indie game developer The Wandering Band, exclusively on the Epic Games Store for PC and Mac.

For the next two weeks, Airborne Kingdom can be purchased at a discounted price of $19.99 as part of the Epic Games Store Holiday Sale; after that, it will price at $24.99, or $29.99 for a deluxe edition that also includes the game’s orchestral soundtrack by composer Paul Aubry.

A first-of-its-kind “sky city builder,” Airborne Kingdom finds players in control of their own civilization in the clouds – at first a small propellor-borne platform that will grow in population and scale into a vast, bustling kingdom. Gathering resources, exploring the sprawling landscapes below, and maintaining literal and figurative balance as the city expands in every direction, players will gradually ally themselves with kingdoms on the ground, collaborating to kickstart a long-lost global exchange of resources, ideas, and hope.

With Airborne Kingdom, The Wandering Band – a skilled team of industry veterans with decades of experience in the AAA space on titles such as Battlefield Hardline and Dead Space – set out to create a different kind of gaming experience. Working away from the creative confines of AAA, designer Ben Wander (A Case of Distrust) came together with art director Chee Fong, engineer Fred Gareau, and production veteran Zach Mumbach in order to chart a new course for the familiar city-builder genre.

A gorgeously rendered and inviting strategizer that exists at the intersection of high fantasy and construction/management simulation, Airborne Kingdom represents not only a daring mash-up of beloved genres but a vision of that most sought-after variable in gaming: something new.