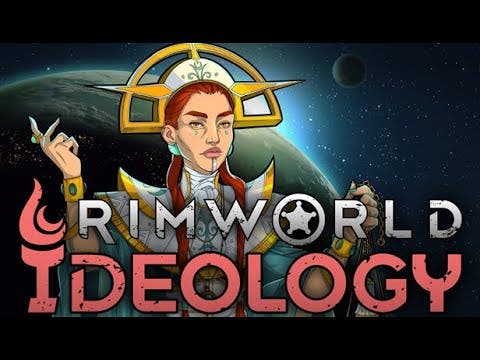 Introduce a colony-defining dogma with the Ideology expansion for RimWorld, out now

What do you believe? This second expansion for the multi-million selling sci-fi colony simulator RimWorld gives every person in the game a belief system. Play as piratical nudist cannibals, blind undergrounder mole people, charitable ranching cowboys, machine-obsessed transhumanists, and many more.

RimWorld – Ideology makes your story into your story more than ever before.

FEATURES
Memes and precepts
Each belief system is built around a collection of 1-4 core memes, where each meme represents a core idea in the belief system. By combining memes and changing the details of how they are expressed, you can create a near-infinite variety of different belief systems.

Conversion
People can convert each other to new beliefs. You can assign wardens to convert prisoners, or use the special abilities of your moral guide. People will also spontaneously try to convert those around them. Those with proselytizing beliefs will do this much more intensely – which can lead to conflict. Depending on traits, some people are much easier to convert than others. You can bring everyone in your colony to one belief system, or try to keep a diversity of beliefs to capture the benefits of all of them.

Social roles
Make use of your favorite colonists’ strengths and skills by assigning them formal social roles. Each belief system defines special roles that believers can take on.

Rituals
Each belief system defines a collection of unique rituals. These player-controlled events are special gatherings that have a variety of impacts depending on how they are carried out. For example, a wild party in a massive dance hall with giant speakers may attract new recruits or lead to the discovery of an ancient complex full of loot. On the other hand, if you throw a party in a field with no music at all, you might not get the same benefits.

Some examples of these belief system-based rituals include dance and drum parties, social festivals, funerals, tree celebrations, burn and smoke circles, gladiator duels, sacrifices, and cannibal feasts. Other rituals aren’t specific to belief systems — such as speeches, trials, and executions.

Gauranlen trees
A unique type of tree called the Gauranlen tree will occasionally sprout near your colony. These majestic orange trees have a symbiotic relationship with small creatures called dryads. The tree supports the dryads, and in return the dryads protect the tree. Each tree has a few dryads attached to it. A colonist can connect with a tree in a special ceremony. By pruning the tree over time, the colonist can strengthen the connection and gain the ability to influence its dryads.

Relic hunts and ancient complexes
Every belief system holds some special objects as relics. It might be an ancient sword, a skull, a piece of armor, or anything else. Embark on multi-part quests to find and collect the relics that you believe in.

Additional quests
Ideology also adds some new quests not related to the relics — including Ancient complex loot quests,  groups of beggars asking for aid, and new temporary encampments near your colony to raid.

New buildings
Belief systems unlock new buildings, and many of the buildings are used to support rituals such as altar, lectern, drum, burnbong, pyre, and more.

Belief system styles
Each belief system is associated with different aesthetic styles. Styles affect how many things look – rituals, furniture, floors, apparel, and art. Your colonists will enjoy being around things that match the styles of their belief system, and some may reject styles of other beliefs.

New apparel
Beyond styles, belief systems can make people want to wear specific items of apparel. Some of these can be specific to certain social roles as well – a priest or moral leader may need to wear a special hat or robe. Ideology includes a variety of new apparel items believers might want — including visage masks and torture crowns among others.

Archonexus endgame
As your colony grows wealthy, you’ll have the opportunity to sell the whole thing and start anew with your favorite colonists and animals. In return, you’ll receive a piece of a map that leads to the archonexus – a conduit through which an ancient machine superintelligence is said to affect the physical world. This quest acts like a New Game+ mode where you will start over with your selected colonists and animals. You can keep your favorite characters while moving to a new colony in a new place and progressing on an epic quest. Each new colony appears next to an ancient archotech structure of increasing psychic influence. Study each structure to unlock further pieces of the map. Unlock three pieces, and you can locate the archonexus itself, invoke its power, and transcend physical reality through the mind of the machine god. There is a new ending song by Alistair Lindsay as well.