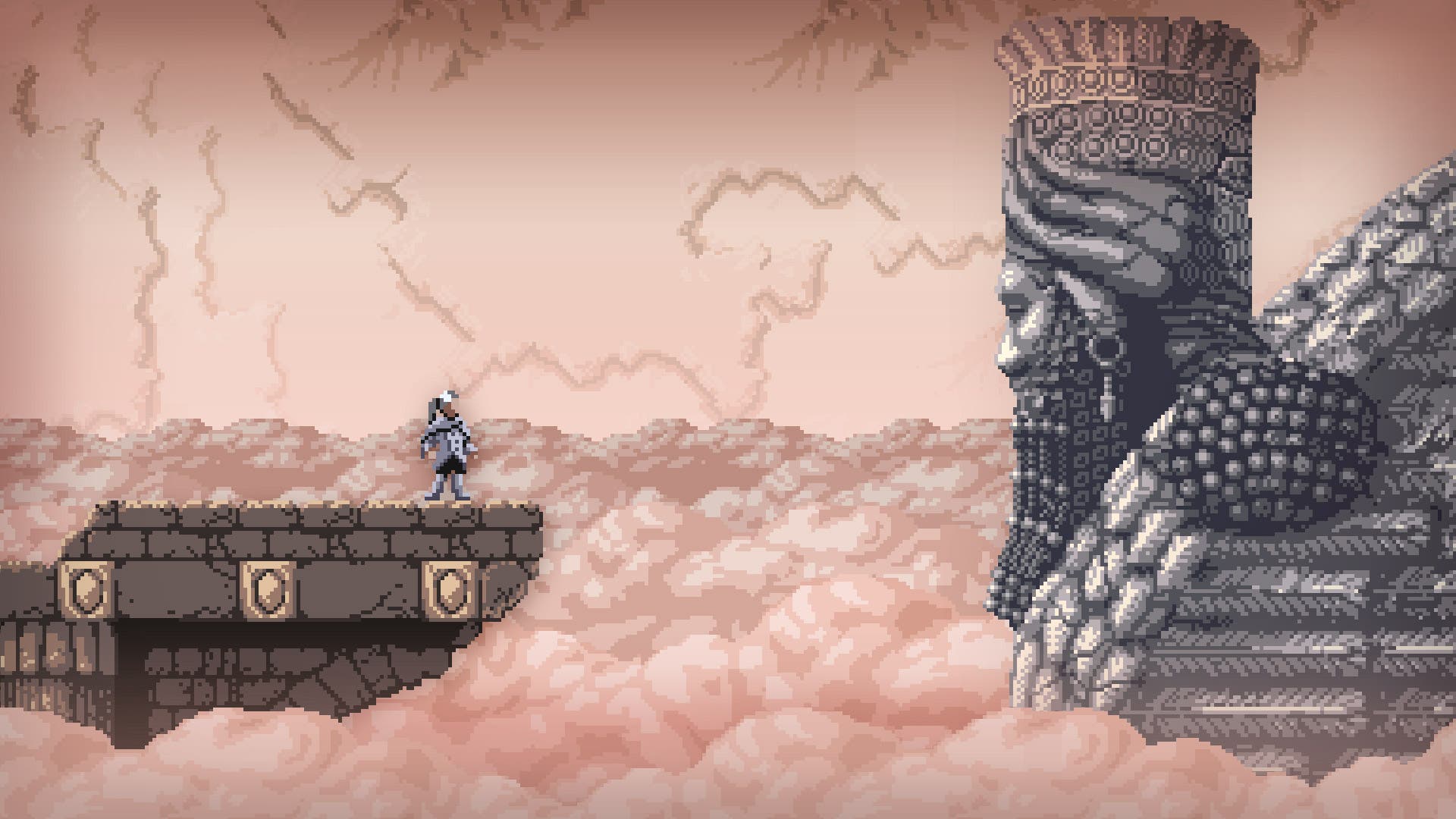 Kicking off with an opening sequence befitting of the 16-bit era it pays homage to, Axiom Verge 2 pulls no punches with its setup. This club has everything; worldwide mega conglomerates, antarctic research stations, disappearing science crews, mysterious invitations, and portals to other universes, and one very impressive helicopter give you all of the pull you need to dig into the adventure that lies ahead, and this is all within the first fifteen minutes of the game. Things really pop off once you cross over into the alternate universe and your questions are answered with further, bigger questions.

As Indra Chaudhari, the mysterious billionaire head of Global 3 (the aforementioned worldwide mega conglomerate), you set off on a journey to uncover the fates of the research scientists at the station belonging to a rival company she has recently acquired. Indra starts off the game modestly, armed solely with a small health pool, an ice axe, and her apparent genius intellect to help her on her way. There is no direct reference or major overlap to the story or characters in Axiom Verge 1, which helps make the game accessible to folks who skipped the first, and adds to the sense of mystery and discovery for those who did.

Axiom Verge 2 hews closely to core tenants of the genre, with a major focus on exploration, loads of abilities and unlocks, and like its predecessor it boasts some truly wonderful artwork and music that both pay tribute to the roots of the Metroidvania legacy and elevate it above its forbears. It also excels at finding new and interesting ways to experiment within the context of the genre, and within its own fiction, so that the mix of abilities you gain are not just practical upgrades that enable enhanced traversal (like climbing vertical walls or detonating loose rock), but exciting twists on old favorites and entirely new concepts that weave in seamlessly with the world and the gameplay. 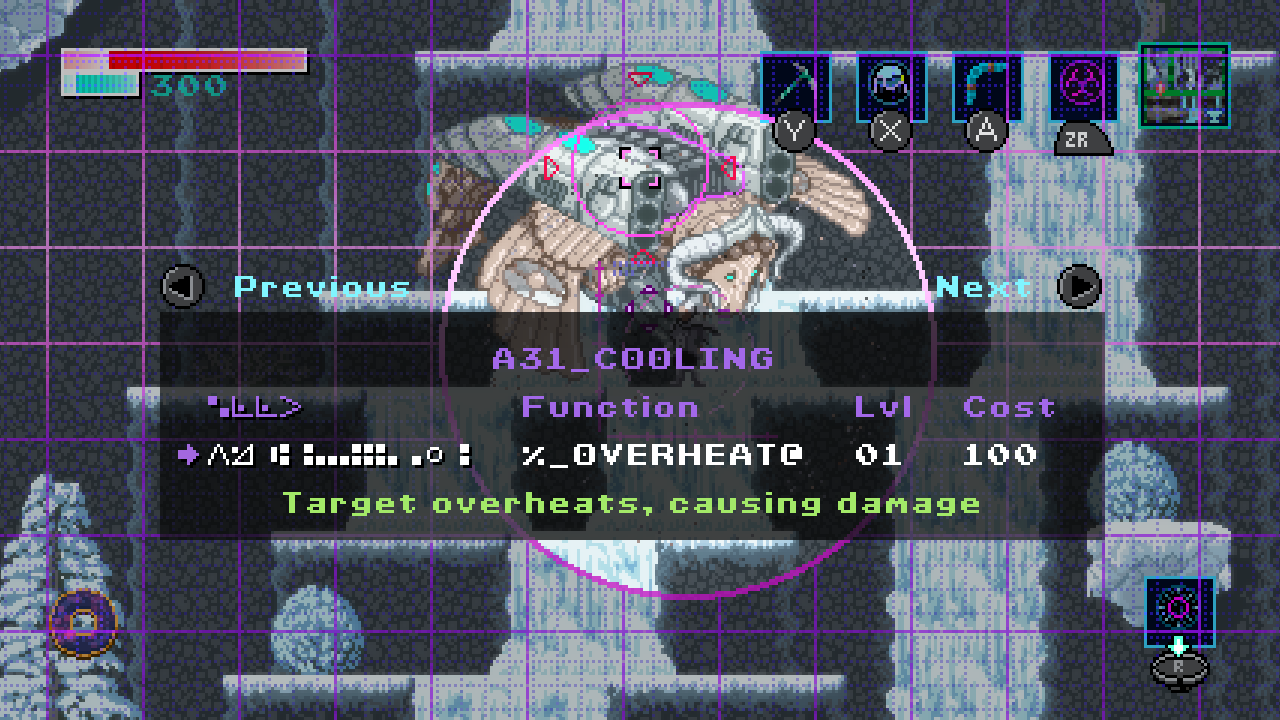 Utilizing a remotely controlled drone makes a return conceptually, but rather than just being a clone of an enemy type like in Axiom Verge 1, the drone becomes a central part of the experience as it allows for safe travel into The Breach (the alternate world between worlds first introduced in the original game), and it also has its own full set of unique abilities that allow it to access places that Indra can’t on her own. The real power of this dynamic becomes apparent later in the game, but I’ll say for now that it’s more than just a gimmick and it feels not just like a part of your arsenal but an extension of yourself.

On the whole, playing Axiom Verge 2 is a delightful experience. There’s so much to explore, new abilities and upgrades are doled out at a frequent, well-measured pace, and it’s incredibly responsive and easy to control. Combat is very much an affair of “approach each situation however you want,” leaving you to decide whether you want to hack apart every hostile deathbot you see, avoid fights where you can, or use your hacking abilities to turn your foes into allies and improve your odds in encounters. I tended to use these strategies interchangeably or in combination. 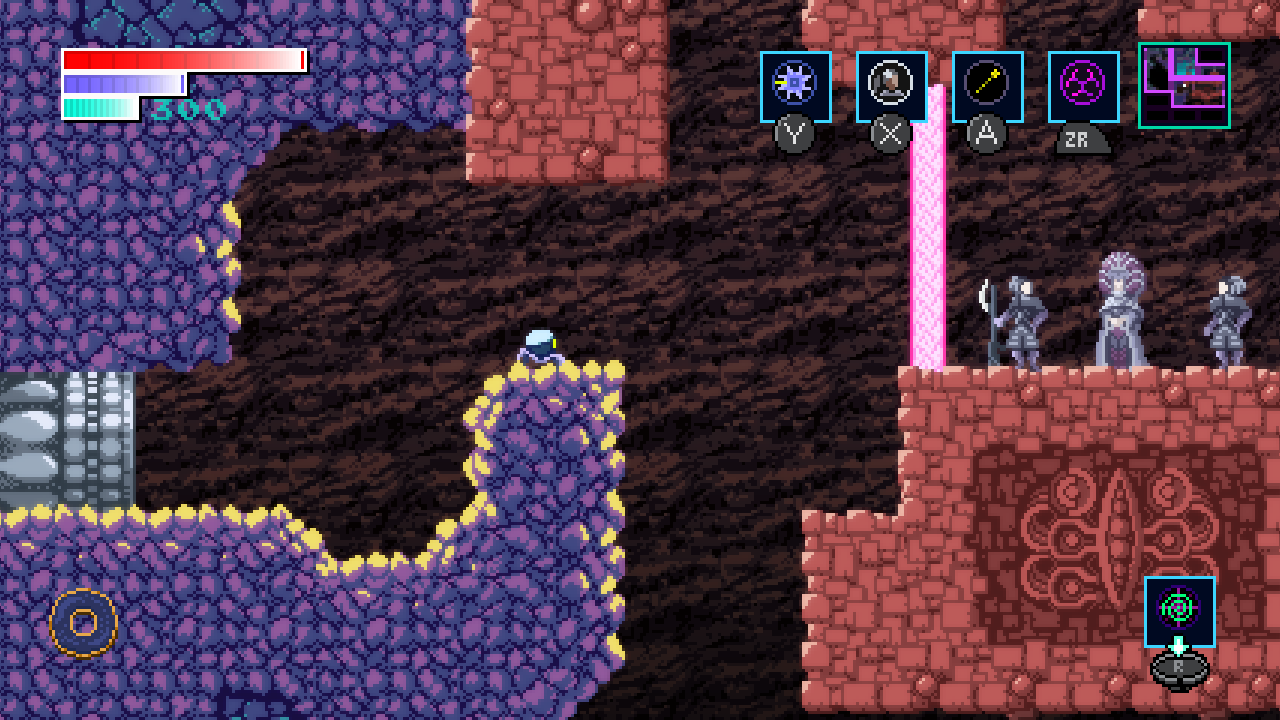 You’ll collect skill points that you can invest into some trees that will let you strengthen yourself in areas that suit your play style. You can turn yourself into a really hardy fighting machine pretty easily, or you can opt to focus on hacking with a giant pool of energy to draw from and turn everything on the screen into your friend and explode anything that doesn’t comply. You can also focus on improving your drone’s abilities if you decide you want to use that to get a lot of your work done. Axiom Verge 2 caters to player choice in a manner reminiscent of Arkane Studios’ Prey, and while the skill trees and their interplay with systems aren’t nearly as deep, the core elements are clearly there and they work well.

The game’s map is pretty large, and it is thankfully very generous with save points, which pull triple duty as fast travel and resurrection points alike. Death becomes less frequent as you get further in, but even when it happens it the penalty is minimal as you can’t really ever die so much as just get sent back to the last shrine you visited, so losing progress to a death is barely a concern. Similarly, while the game does have boss fights, the majority of them are optional and feel more like extra mid-boss encounters that you can choose to engage with or not. The only thing you miss out on by skipping them are some extra upgrade points, and it leaves you to wonder whether destroying all of these animalistic machines is really necessary in the first place. 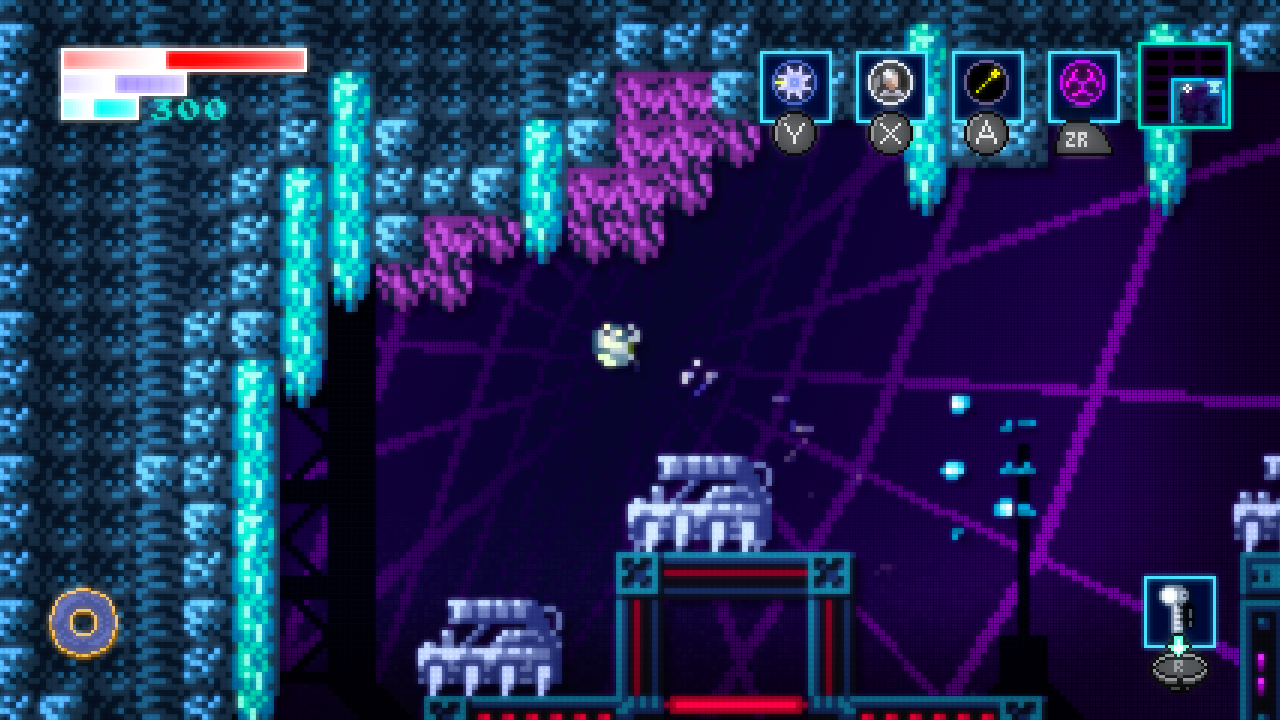 Axiom Verge 2 makes a concerted effort to break from the typical linear nature of Metroidvanias, which provides a somewhat more open-ended structure to the way things unfold that is usually liberating but at times can be confounding. This was a problem I had in the original game as well, but there was more than one occasion where the nonlinear nature of the world left me retreading nearly every corner of the map trying to find the next progression point, usually to find that the way forward was a branching path very near the most recent ability I’d unlocked, but that I’d missed because that branch wasn’t obvious to me or because I was convinced a side path I could now explore from before absolutely had to be the way to the next thing.

The game does give you some good tools on the map to help with this, though. The first of which being some very clear indicators of where on the map your next objective is (to help hint you in the right direction), and the second being an ability to place markers on any map node you wish, so that if you see a path you can’t explore you can very clearly mark it for yourself to go back to later, a practice which ended up saving me a lot of headache after I got used to integrating it into my play. I still wish that there was some kind of in-game system for reminding you of what your current objectives are in terms of the story, but this doesn’t actually have a major bearing on getting to your next destination so much as the destination itself. 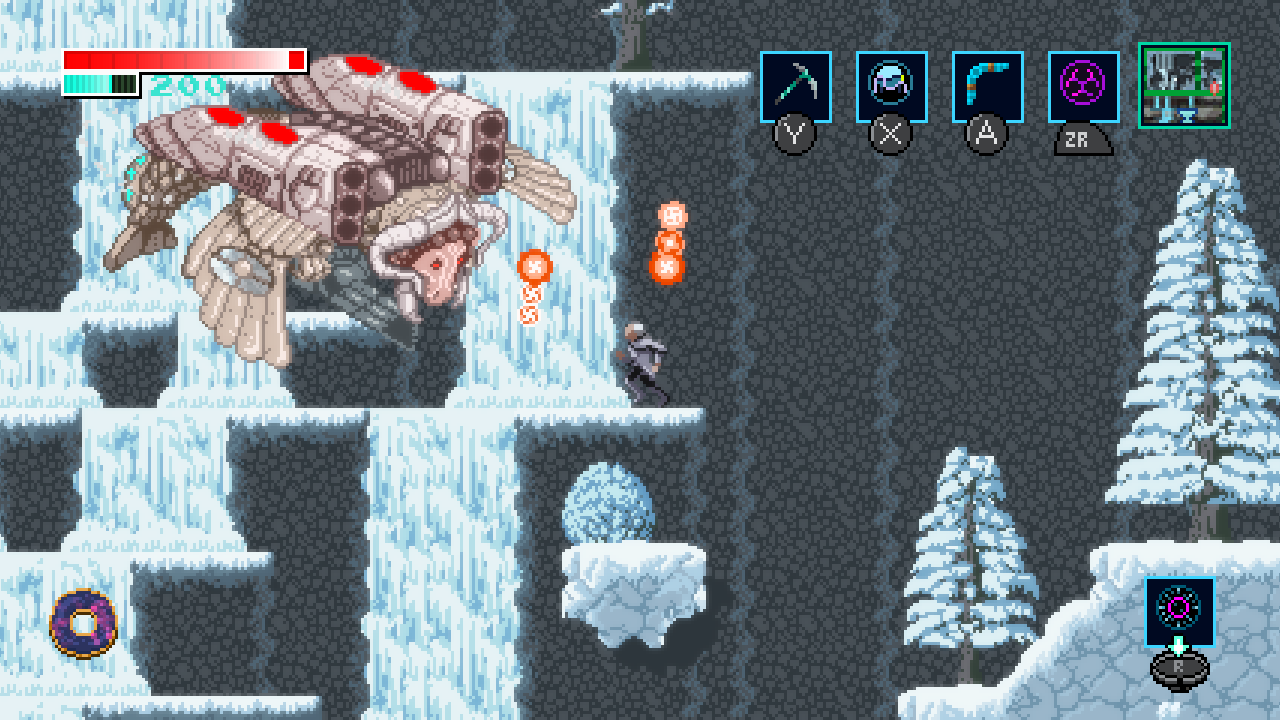 There are a few specific qualities of Axiom Verge 2 that have really struck me. The first is that mechanically, it feels much more like a Castlevania game than a Metroid-like, owing largely to the use of melee combat and a host of supporting abilities over the original game’s heavy reliance on projectile weapons. This is no accident,but rather a well-considered and very nicely implemented demonstration of the various forms these games can take. As a result, I found myself thinking a lot about the ways in which Axiom Verge 2 holds things in common with the first game, the ways in which it differentiates itself, and the harmony that exists between them.

The second thing that left a strong impression (and continued to do so throughout) is the game’s setting; crossing over into the alternate dimension isn’t a journey into the future-space sci-fi world of the original game, but rather a series of largely natural environments and biomes. Snowy mountains, grass plains, massive underground lakes, a salt beach, jungles, temples, and other mostly outdoor locales composed of more muted, realistic color palettes make for a beautiful backdrop to the experience. Layered on top of all this are heavy references to ancient Sumerian and Mesopotamian mythology. While there were some hints of this in the first game, particularly in its use of the Sumerian language, Axiom Verge 2 really goes for it to the extent that overt references to Sumerian culture exist in the game as concepts and characters. 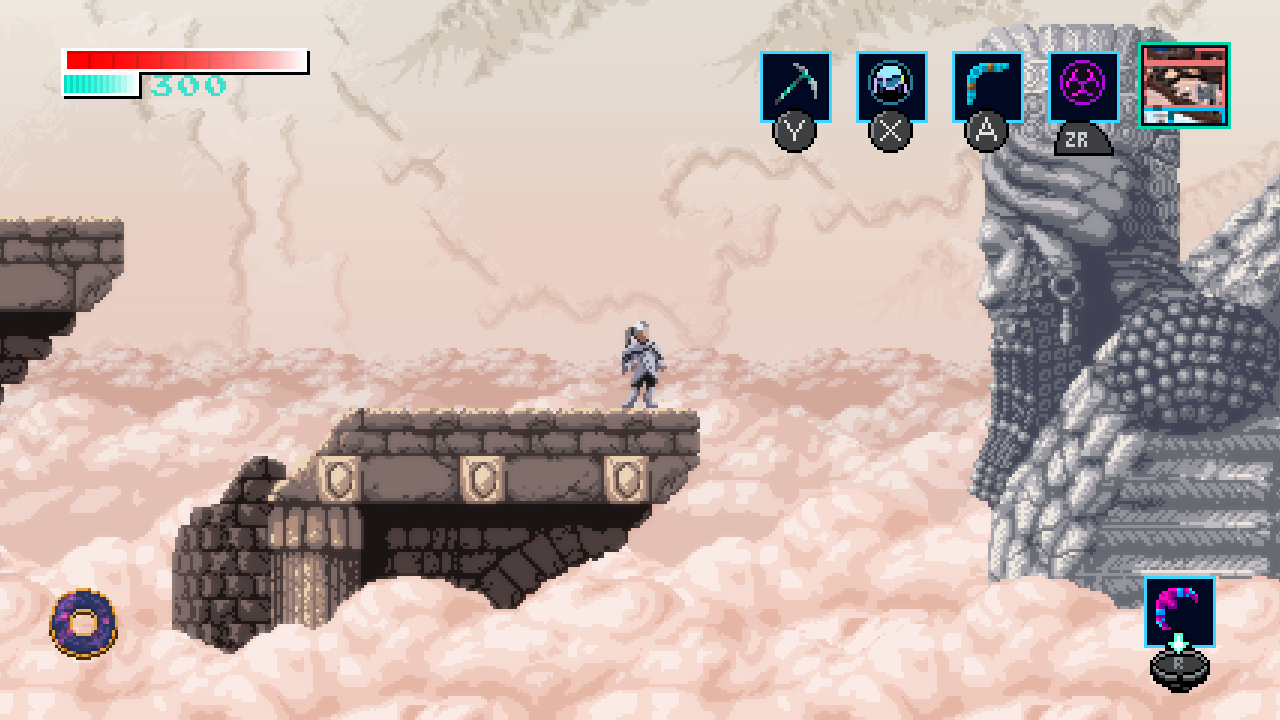 The existence of an ancient culture in the world of Axiom Verge 2, mixed with what is clearly advanced technology in multiple forms, does a great job of creating an uncertainty about when exactly this world exists relative to our own. There’s definitely an “ancient aliens” vibe, but the twist of everything taking place in an alternate universe gives you the sense that there’s a greater purpose behind their presence beyond the standard trope of a highly advanced species from another planet visiting; something that spans the multiverse and has left its mark in many of its iterations leaves you with a greater sense of awe.

Axiom Verge 2 is a thoroughly enjoyable game that hits most of its notes perfectly, and is easy to recommend. Where Axiom Verge 1 was a clear love letter to Metroid, Axiom Verge 2 establishes more of its own identity, both in how it fleshes out the shared universe of the series, and the ways it blends elements of its predecessors and its inspirations together to create something really unique. Like the first game, it feels both familiar and entirely new. The sense of mystery and wonder, combined with excellent mechanical execution, will keep you going on a breakneck pace from start to finish.