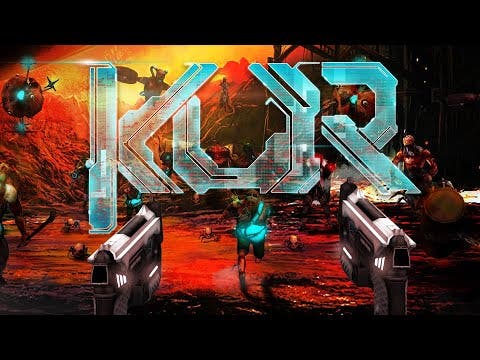 KUR from The Quantum Astrophysicists Guild is a comedic first-person shooter, out now in Early Access

We just couldn’t wait any longer to bring our robot-ripping retro FPS to life! Revealed today at Realms Deep, the classic gaming showcase, KUR is available now as an Early Access title on Steam. Play through 23 levels across three main acts with a fully completed campaign starring one very sarcastic Australian mercenary. You’ll collect a wacky arsenal of weapons and a full menagerie of horrific artificial intelligence to fight against. Take up the challenge of creatively varied scenarios as you work your way through progressively harder combat arenas and some wildly over-the-top boss fights!

This comedic take on the classic ’90s shooter lets you put the boot to your enemies – literally! You can slide and kick your way out of most situations, and if that doesn’t get your totally real human blood pumping there’s always the shrink ray that lets you shrink enemies then punt them into gloriously gibby explosions of limbs and microchips. Fight drones, spider robots made out of the skulls of their victims, mutated giants with nuclear waste barrel hammers, and even more! We’re pretty sure you fight a sentient meatball that is also a train conductor at one point. Each level is filled with pure WTF moments and excellent classic FPS gameplay all to the beat of a pulse-pounding electronic rock soundtrack. Embrace the early ’90s and not-quite-old-school gaming tropes all while upgrading yourself to be the best, most badass, space mercenary you can be.