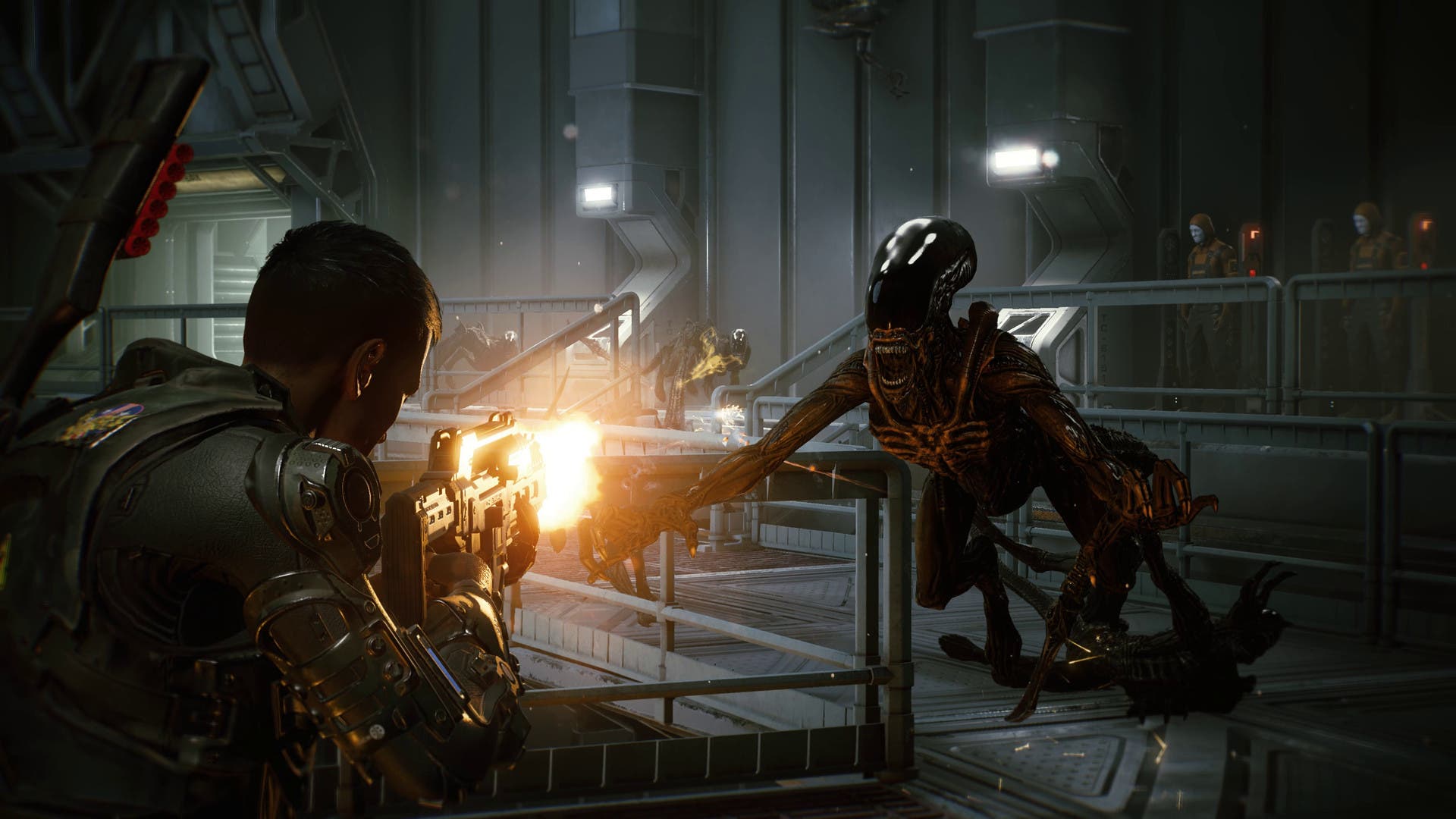 There’s significance in the fact that the game’s title is the plural of ‘alien’. This is a more action-oriented game than that of something like Alien: Isolation. The developers say this is now a universe where “the outbreak is over – the xenos won.” What the UAS and Colonial Marines are focusing their efforts on now, is saving humanity wherever they can. Across four campaigns with three missions each, you’ll traverse cramped abandoned ships interiors and foreign planet exteriors to mount these rescues while fighting off an absurd amount of xenomorphs of all shapes and sizes. With relative success, you could see the end of the game’s content in about six hours. Once every campaign is complete, horde mode is unlocked for endless fighting, or you could replay the campaigns at a higher difficulty until new content drops.

There’s a lot of xenomorphs to kill here. This is a blessing and a curse. While this is something you want to be doing, it tends to make the “xenos” not actually special. That is, until the unique ones like spitters, prowlers, and warriors come along. These require teamwork of firepower and abilities to put down, or it puts the whole mission at-risk. When these ones come along, it makes things feel special. For the rest of the game, you’re fighting not fully grown xenomorphs that come in packs like they’re velociraptors or something, which is odd behavior. About halfway through the game, you’ll inexplicably be fighting Weyland-Yutani synthetics. The synthetics also come in different flavors of toughness as well, but they’re not nearly as exciting as the xenomorphs, as they tend to be a stand-in for human-like enemy in order to wield guns. There’s certain points in every mission where your action will draw the enemies to you, and watching the xenos swarm in is rather frightening at points.

You can play Aliens: Fireteam Elite solo, joined by two Weyland-Yutani synthetics by the names of Alpha and Beta. Or you can bring two friends along for the ride. If someone dies, there’s a limited number of lives before it’s “game over, man”. But there’s a chance to save them with a down-but-not-out mechanic. If your partner has to drop for whatever reason, the AI will fill in, even if it’s mid-mission. The AI bots you get are rather competent. They’re outfitted with the Gunner class of weapons and perks, but they hold their own and will even heal themselves. I managed to get through most of the campaign solo on the normal difficulty using them, so they’re reliable.

During your time with the game, you’ll be probably wondering where all the cutscenes are, or how these missions tie together. That’s the thing, there aren’t and they don’t. For whatever reason, despite the source material being film, there’s no cinematics. The missions then don’t feel cohesive, and the individual campaigns aren’t connected, despite whatever voiceover there is. Aliens: Fireteam Elite gets to the point by not having cutscenes, but it certainly feels like there’s something missing. 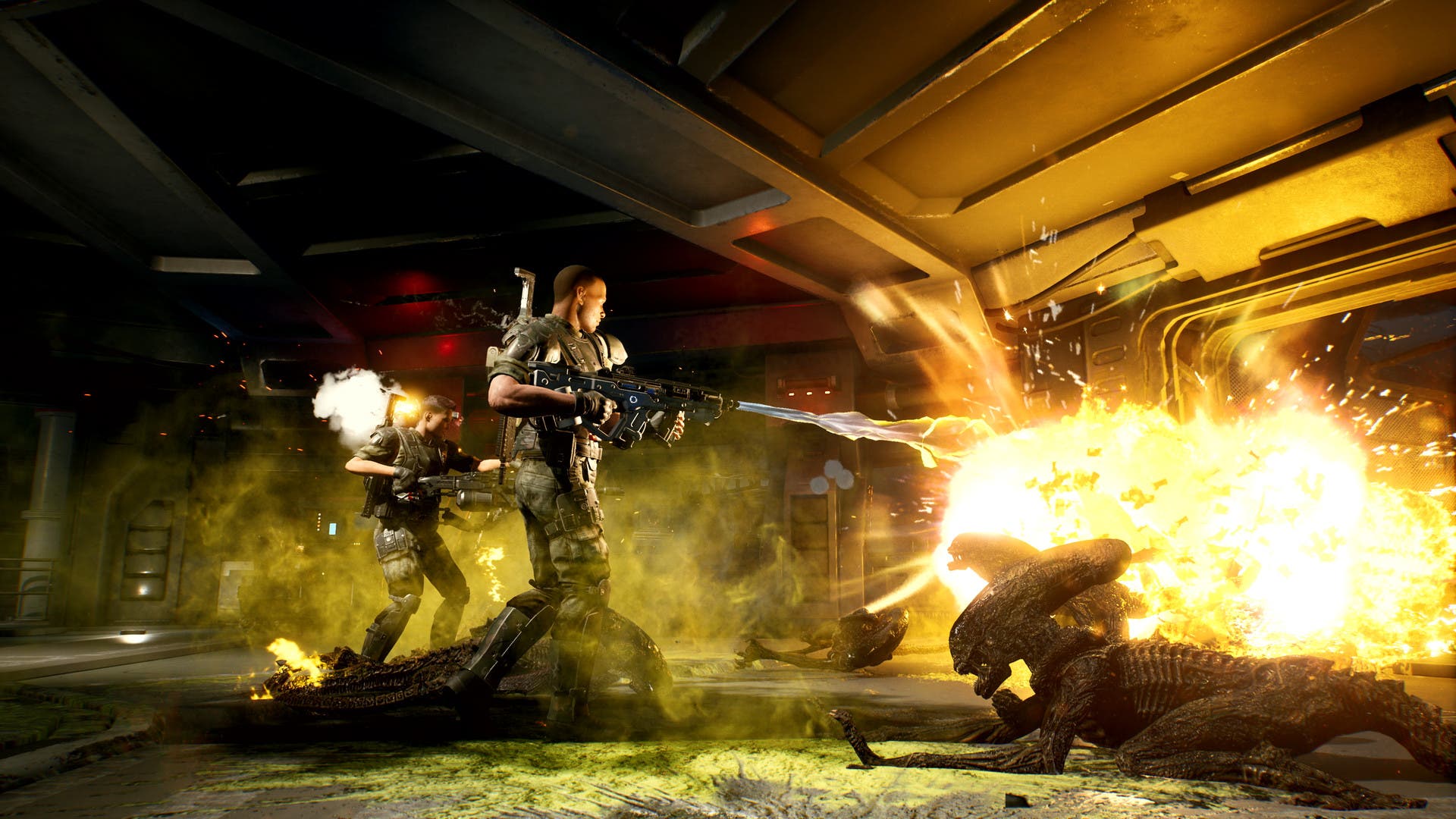 All the staples of “Alien” weaponry are here, like assault rifles (complete with the flange sound effect), shotguns, flamethrowers, and more. These weapons that fill your primary and secondary slot have limited ammo that can be refilled at caches at carefully placed points in the level. Your tertiary weapon of the pistol has unlimited ammo. There are consumables like mines, turrets, and incendiary rounds that can be grabbed at these stashes. Consumables are intended to be used at the end of a level where the threat is the highest, but they can be kept and carried into the next mission if you want. As you use your weapons, you’ll accrue a combo up to a 20% bonus to outbound damage. It’s really satisfying that as long as you’re hitting your target, you’ll be doing exponential damage.

As you take on missions, there’s a combat rating. The combat rating is an assessment of your weapon, its attachments, and the perks you’re using. You can raise the combat rating by using the same weapons and allowing it to gain experience, or by swapping out attachments for higher rated ones. As you play, you’ll earn player experience. Like the Colonial Marines, you’ll rank up and have more ribbons and medals to wear. These are your perks, and like a version of Tetris, you’ll be able to slot them in where they fit. This encourages you to be more thoughtful about how you outfit yourself in comparison to your partners. You can equip challenge cards, which can hamper certain things like turning off the HUD or introduce weapon jams for an increased challenge. These are like Halo skulls, and are usually to trade for extra credits or experience. I’ve yet to find a “Xenomorph Birthday Party” one. 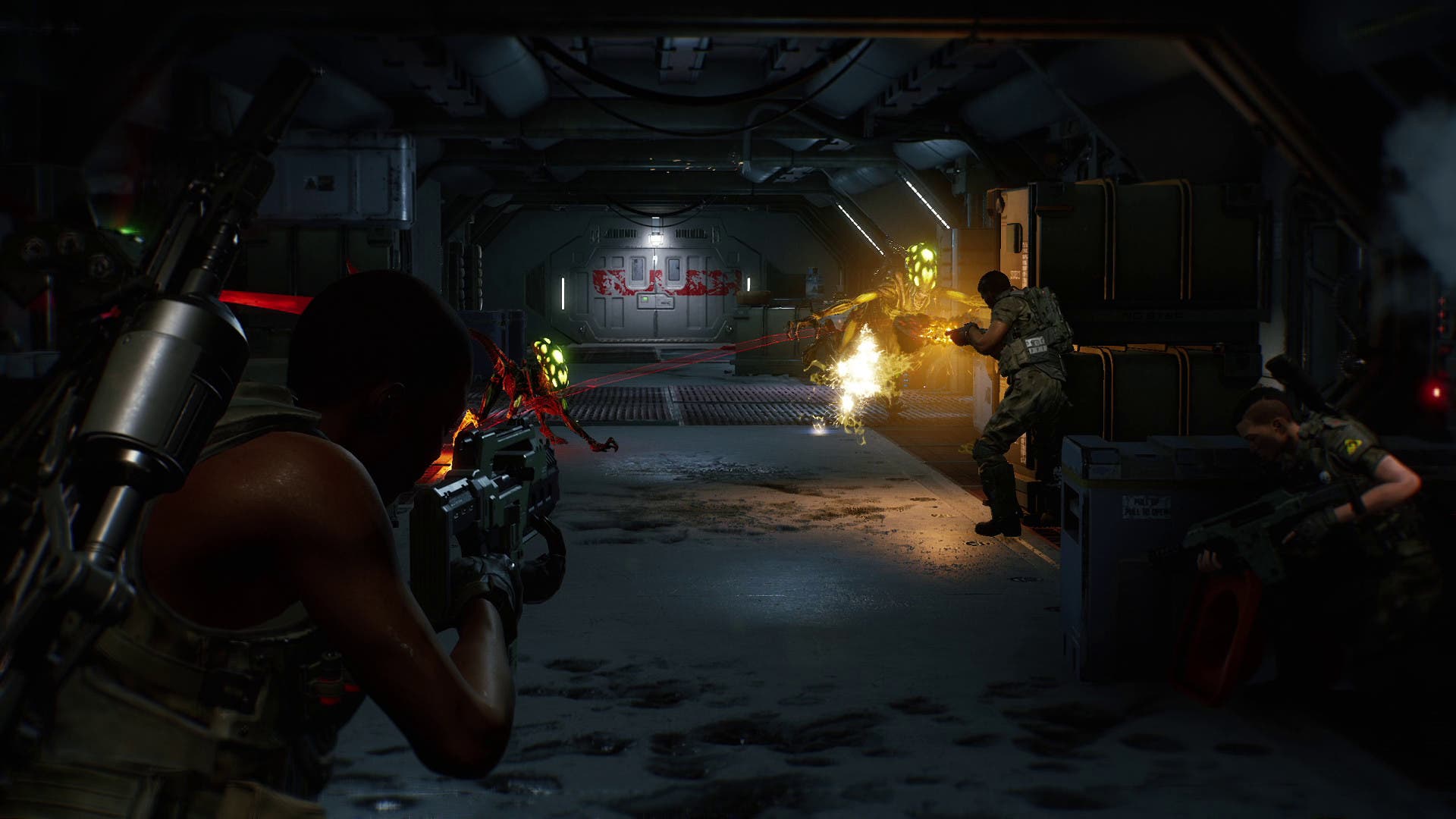 While the game is mostly enjoyable, it has a few issues. I encountered a handful of crashes both by myself and in online coop. At first I thought it was just me, but everyone was experiencing the same anomaly: the audio is quiet, and muffled when it shouldn’t be. No option exists to select your audio device or tailor the audio experience to headphones or speakers. And this is with every aspect of the audio, it just sounds off. So while a lot of the music, audio cues, and sound effects are authentic to the film franchise, the soundscape is rather disappointing.

All too often I came across idle special xenomorphs sitting in their place, waiting to be activated. More often than not I was able to get the first shot off, or just about kill them before they even reacted. I suspect this is something that will be patched shortly, but it takes a lot of the suspense out of the game when you find them like that. When it does work though, the xenomorph will pounce you from the shadows and illicit a proper jump scare out of you.

Aliens: Fireteam Elite is a lot of fun whether solo, or with friends. It feels rather disjointed not having any cutscenes or meaningful threads for any of the campaigns. The crashes, bugs, and audio flatness get in the way of its overall enjoyment and longevity. Cold Iron Studios have post-launch content lined up, and so there’s promise of these issues being fixed and there being more to do in the near future. Aliens: Fireteam Elite lacks the connective tissue and spectacle that the films are known for, yet manages to provide entertainment for mindless, late-night sessions with friends.