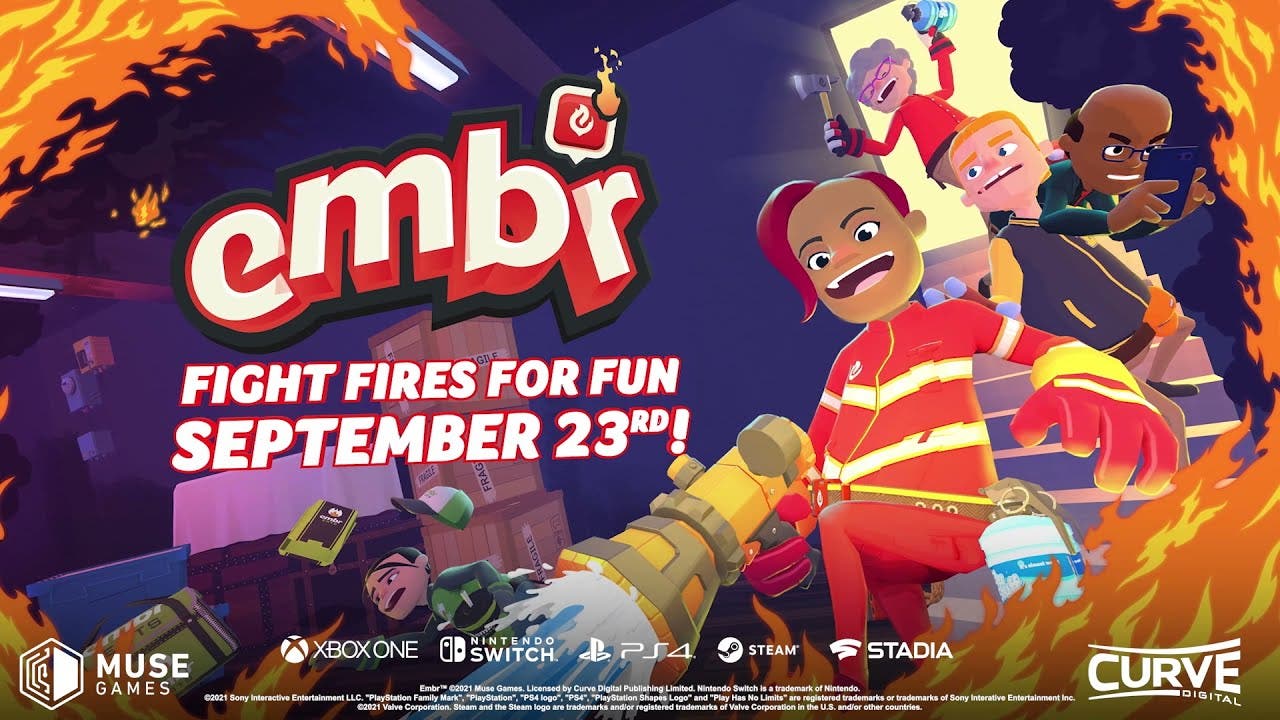 Curve Digital and Muse Games are fired up to announce frenetic firefighting multiplayer Embr will launch on PC, PlayStation, Xbox, and Nintendo Switch on Thursday 23rd September 2021, little over a year after the game first entered Early Access on Steam and Google Stadia. Embr will also see a physical release on PlayStation and Switch the following day.

As anyone who has taken on that Early Access version will know, Embr is a marvellously manic multiplayer where you and your friends come together to have a go at fighting ferocious fires and rescuing residents – if you count chucking them out of an open window onto the ground below as a bona fide rescue, that is.

Players either take on the game solo or work together in online teams tackling fire after fire to pick up tips from clients, earning the ever-so-crucial 5-star rating in order to collect cash, upgrade tools, and hopefully become the ultimate ‘have-a-go hero’ firefighter.

If one job wasn’t enough, players can also deliver takeout food on the fly with ‘Embr Eats’ and drop off explosive parcels as a ‘Box Box’ delivery expert, all before becoming a DIY safety engineer as a Gaslight Inc employee. It’s the full amateur adventurer experience!

On top of all the Embr’s standard gameplay, the full release will include:

“If anyone is expecting Embr to be a realistic depiction of an average day in the life of a firefighter, then they’re in for a big surprise,” says Howard Tsao, Team Lead at Muse Games. “Embr is the ultimate have-a-go-hero adventure, where everyone from the paper boy to the Gran who lives at the end of your street could fill their day by coming to save you from a blaze in your house – even if that means throwing you out the window in the process. In Embr, the ends justify the utterly manic means.”

Embr is designed for PS4 and Xbox One, but will run perfectly on PS5 and Series X|S. The game will launch on PC, PlayStation, Xbox, and Nintendo Switch on Thursday 23rd September 2021 for £17.99/€19.99/$19.99. Embr will also see a physical release on PlayStation and Switch the following day.