Golf games have been everything from simulation to arcade, and sometimes anywhere in-between. But I’m hard-pressed to think of a golf game that has a heavy, emotional story to tell while you’re distracted playing it. That’s what Golf Club Wasteland does, and does so well. Developer Demagog Studio offers a deep dive into the ecological and economy-driven decisions that will have profound impacts on the human race, and especially key individuals. All of that, in a golf game wrapper is nothing short of amazing to deliver that message. If this isn’t on your radar, it should be. Golf Club Wasteland is an absolute gem.

The premise of Golf Club Wasteland goes like this: Earth has become uninhabitable thanks to “The Great Catastrophe”. All the humans now live on Mars under authoritarian control, and have to use hazmat suits to survive each day. There’s lots of restrictions, but even the elite and richest have found a way to continue their lavish lifestyle by living in Tesla City. They take this further by vacationing on Earth to play radioactive golf. Details of the story are doled out through diary entries by completing individual holes under par. The things you discover along this journey are rather eye opening, and in some cases disappointing as you realize that some of this is already in-motion with us.

The game has an eclectic soundtrack that is comprised of fictional tracks from the 2020’s that occupy the game’s post-apocalyptic future, over the radio. And there’s many catchy tunes that I’d listen to the OST outside of the game just to hear. The broadcast is heard from the perspective of you as the golfer, listening to their favorite station: Radio Nostalgia from Mars. It’s not exactly a name that rolls off the tongue, but it says it all. You’ll hear stories from those who lived on Earth that was, and share stories of live before The Great Catastrophe, giving a whole new meaning to homesick. These multiple perspectives paint a picture of desolation, desperation, and despair on not-so unimaginable levels.

Since this is a golf game after all, you do play a lot of it. Now, there’s no direct movement. Because of that, I’m reminded of Desert Golf, due to the straightforward hitting, traveling to where it lands, and repeating that until it goes in the hole. Whether far away or high up, you’ll use a jetpack to get to where it lies. Or if it’s within walking distance, will plod along. Your character will be traversing long distances, and despite the jetpack, feels at a snail’s pace. This is a game you’re meant to play in a relaxed manner to soak up the visuals, and listen to the words, yet feels too slow moving at times. After playing through the tutorial, you’ll be given the option of selecting one of three difficulties or modes to play in. Story mode is for casual play, getting all of the story, and where strokes over par do not gate progress. Challenge mode then requires that you have to get par or under in order to proceed to the next hole. Later modes do introduce some difficulty for those looking for it. Lastly, you have Iron mode, where you can’t make even a single mistake. There’s a lot of replayability here, and you’ll be driven to ooze out every drip of story you can get.

I played the game with a gamepad, and found that dragging the thumbstick in the intended direction and pressing A was a fine control scheme. The arrow that gets drawn on-screen is not a good indicator of power, nor was the trajectory it projected. It takes a bit of guesswork or plotting to understand where the ball will go outside of what the UI shows you. Due to the perceived imprecise controls, you’ll likely want to restart to get a better score. There’s unfortunately no quick restart button, you have to pause, wait for a small animation to play, then select the option to restart the level. There’s plenty of unused buttons on the controller that this would be a quality of life improvement, especially for subsequent playthroughs. 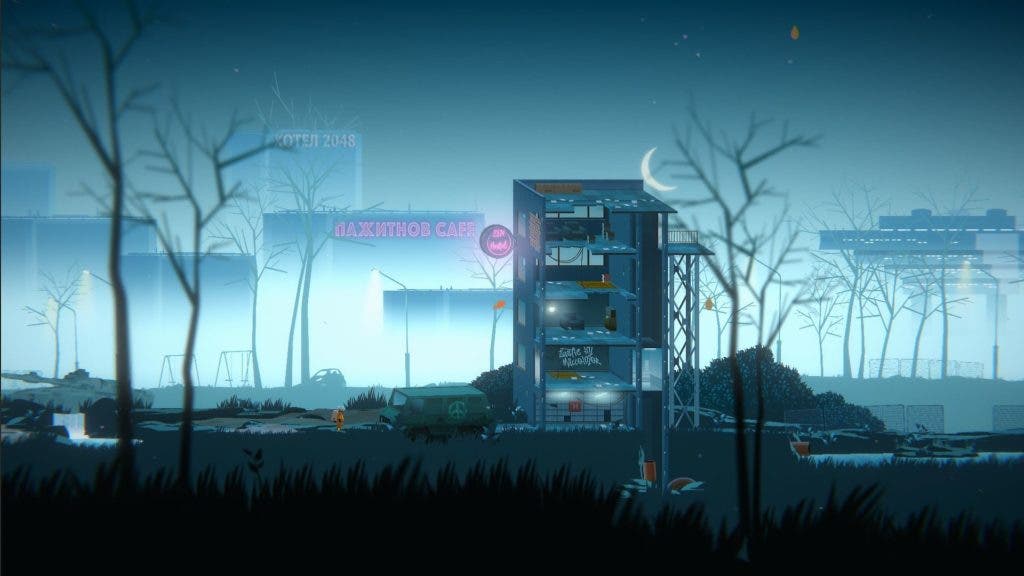 There are thirty-five holes on this unique Earth course, where rules of golf as we know it no longer apply. As you progress further, you’ll have ones that have up to 18 strokes for par. They’re intricate, detailed levels. Many of them will have shortcuts or some sort of trick to them to minimize the number of strokes taken. It does seem that you can get a hole-in-one on everything. Uncovering their secrets are an absolute pleasure when you get it. As an aside, I really like the way the golfer reacts to botched shots near the flag.

Given that Earth is toxic now, still manages to have pretty vistas. The game’s artwork is just absolutely stunning in this regard, displaying a beautiful oblivion. Light blues and pinks dominate the color palette, accented with neon signs off in the horizon, as the power hums along after all this time. These are dismal, abandoned places to see what they’ve become. No area looks the same, and while there’s some outdated memes even by today’s standards, it’s fitting for a world left behind decades earlier. 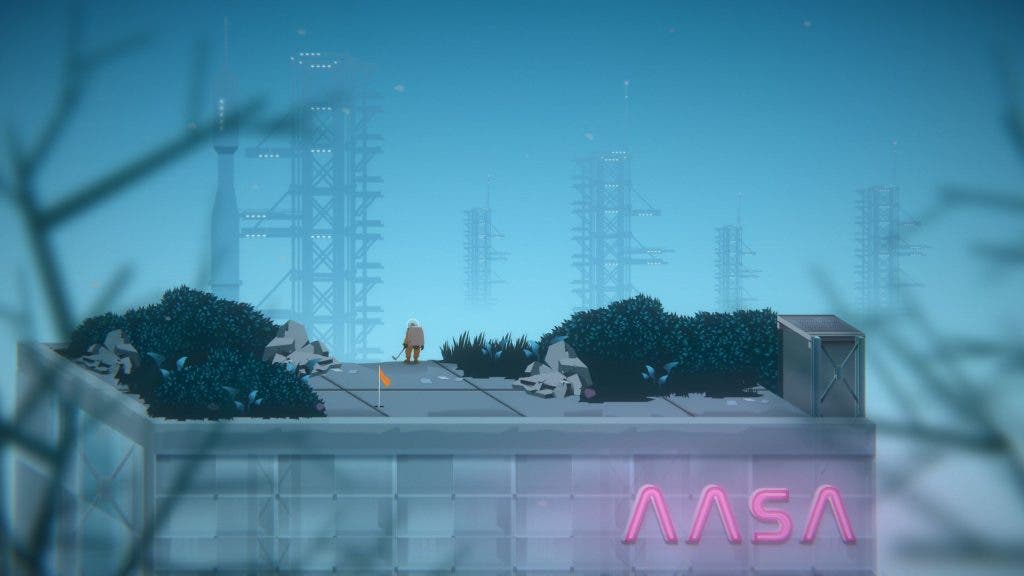 Golf Club Wasteland was a pleasant surprise, from the solid gameplay to the poignant stories that there are to tell. In the roughly three hours it took me to complete the first time, I was enamored by everything it would give me, and still wanted more. And thanks to the other modes, I did. I do wish the game was a little zippier, as getting around takes too long, and the lack of a quick restart in more demanding modes hurt those experiences. This is an emotionally dense game that earns everything it works for. Golf Club Wasteland is notably touching, and something everyone should play this year.