Turtle Rock Studios not only revitalized the coop shooter, but also zombie games back in 2008. Just when things were getting stagnant, they made a game and it’s sequel that are still played to this day in large numbers. Back 4 Blood is a spiritual successor to Left 4 Dead, and the key word is successor. Taking the core formula and expanding on that, it surpasses them in every way. It’s a deeper and more rewarding experience. Back 4 Blood lets a new generation experience their gory genius. 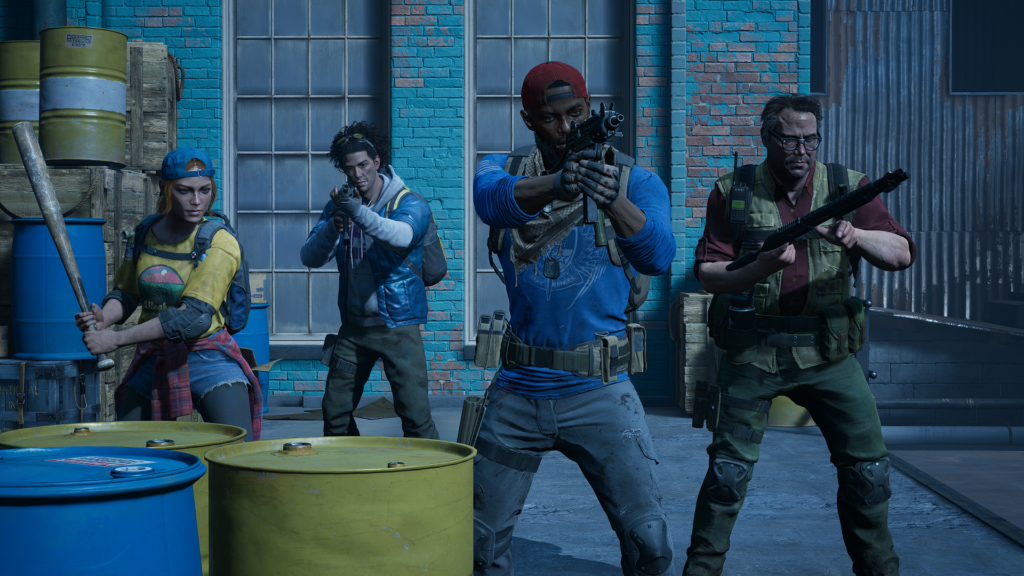 A parasitic outbreak has left humanity hanging by a thread. Those left alive from this infection have fled the town of Evansburgh for Fort Hope. Reinforced by the military, it’s one of few refuges still standing. Humanity has to take a stand against the ridden (the game’s unique name for zombies) or risk going extinct. It’s very easy to spend 10-15 hours on your first full run of the campaign on the Veteran (normal) difficulty. There are four acts that take place over 33 missions, as there are objectives that pop-up through play that can be mandatory or optional. You’ll be tasked with bringing supplies to a safe room, then bringing them to their intended destination or rescuing survivors in the town. There’s levels where you simply need to make it from point A to point B, safe room to safe room, but when these unique ones pop up, it hits different.

To start, you’ll have your selection of four survivors known as cleaners: “Mom” (voiced by horror icon Barbara Crampton), Evangelo, Walker, and Holly. The remaining four cleaners are unlocked after completing Act 1, giving you access to Doc, Hoffman, Jim, and Karlee. Each cleaner has their own personal and team buff they bring to the table, along with a unique weapon they specialize with. There’s so much personality brimming from just the lines they spout while in a safe room to when making a run for the next safe room. Using the integrated ping system, they can communicate and be informative while doing so. They rarely repeat lines or become a nuisance. This is a cast of characters in and out of cutscenes that are a joy to be around, making the post-apocalypse a little more enjoyable. 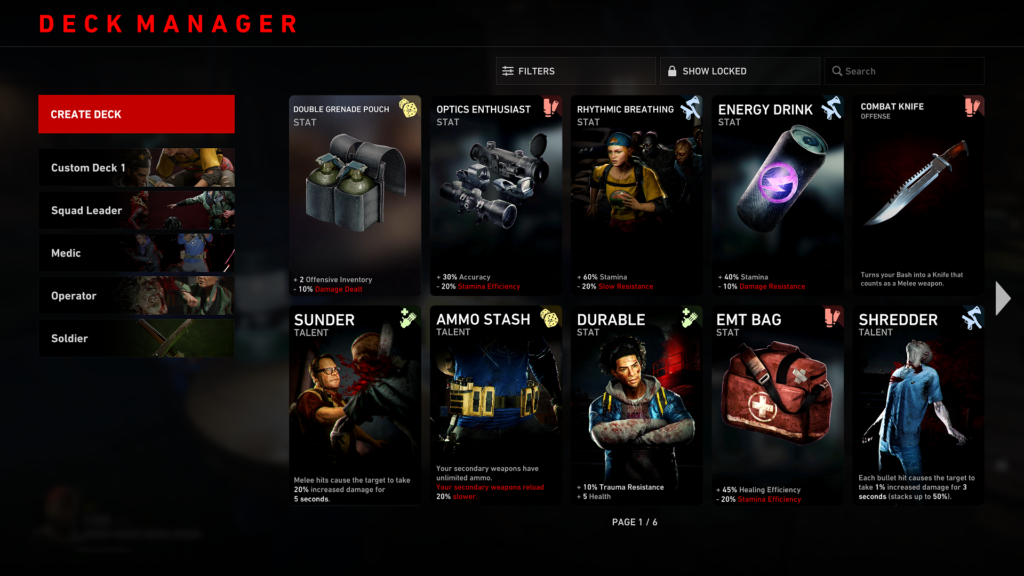 The shooting is what you’d expect from Turtle Rock, in first-person, but now you can now aim down sights (ADS) here. There are lots of guns in the game, broken up into categories like pistols, shotguns, snipers, assault rifles, and the like. Each weapon can be customized with attachments that utilize a rarity system. So equipping a purple optic over your blue optic will do wonders to increase accuracy. Weirdly, attachments on guns can’t be transferred to other guns or even the same gun. Hopefully this is addressed in a post-release patch. In order to buy attachments, health packs, grenades, or increased inventory for the team, you have to use copper. This one of two currencies in the game, and the only one you find in each level. You can sprint in Back 4 Blood, but consumes a stamina bar. In addition, all melee attacks whether a punch or with a knife, or your secondary as a baseball bat or hatchet will consume it. You do have to be conservative in how and when you use your stamina, or you risk being winded and unable to defend yourself. With these new additions, the systems in-place feel more modern and complex in practice.

Also new is the card system. Now there’s a means to build a deck of fifteen cards that will be served to you throughout your time playing the game. Order the deck in the sequence you wish to receive the cards. Categorized into different types, you’ll find and use reflex (movement), discipline (shooting), brawn (melee), and fortune (money) cards. Building a deck that caters to your playstyle or how you can support the team is key to doing well. In a sense, it’s like a create-a-class system, when paired with the right cleaner – but you aren’t beholden to following the direction they start you in. After completing an individual level, you’ll receive supply points. Supply points is the second of the two currencies, and you can purchase to unlock cards in supply lines, which can be equated to card packs. There’s no surprises here, as you know exactly what you’re getting. Corruption cards are the inverse, which stacks the deck against you (heh) by making the ridden armored, adding fog, or introducing different objectives. Left 4 Dead feels simple by comparison. 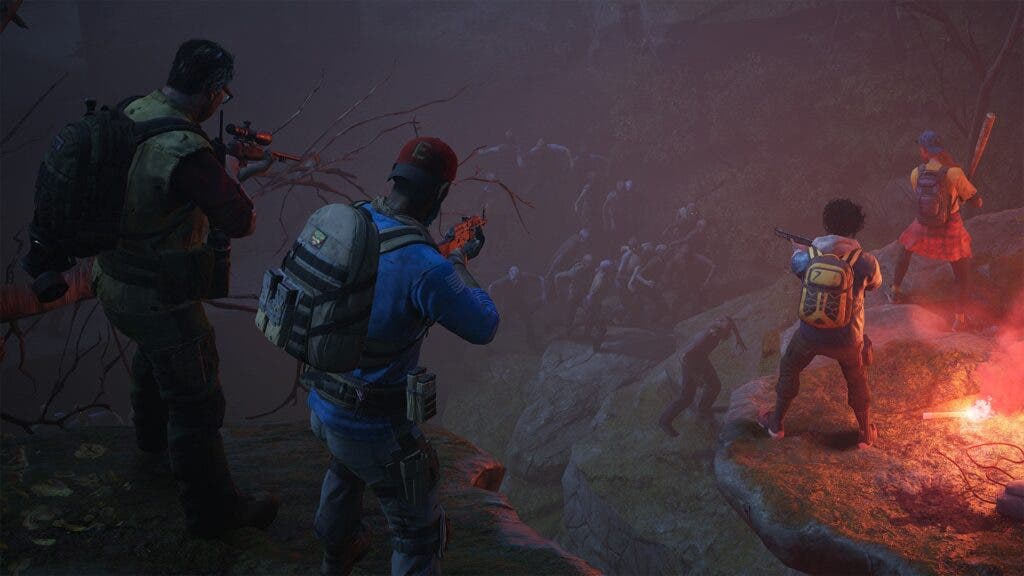 There are multiple modes to the game. Quickplay that will just matchmake you into an ongoing game. This does have it drawbacks, as it is likely to throw you into a game well ahead of where your personal progress is. Campaign mode, which is in your control to create runs with friends or randoms, and jump into where you last left off. Lastly, there’s Swarm mode, the PVP mode. I wasn’t able to get time with Swarm prior to release, but it offers a team of cleaners vs a team of ridden. Everything about Back 4 Blood feels great. The drop-in / drop-out coop makes everything a breeze, and the crossplay is a very smooth experience. With my friend on PlayStation 5 and me on PC, playing together took minimal effort to start slaying the ridden. The game is at its best with human players over the AI bots that fill in, joining up with friends or strangers is more fun.

Aside from the run-in-the-mill ridden that can be killed in one-hit, the mutated are on another level of challenge to take down. While the names might not mean much, there’s reekers, ogres, hockers, tallboys, and more. Then you have the snitch, who will summon a horde by screeching incessantly – what a witch! The ogre is a standout because its health bar is as massive as it is, towering over some buildings as it walks through power lines. Even if you do little or lots of damage, the ogre will go away only to resurface later in the level, usually just before you reach the safe room. Killing one is really satisfying. All of the mutated ridden you come across have some facsimile from Left 4 Dead, so the spiritual successor aspect of the game really shows here. 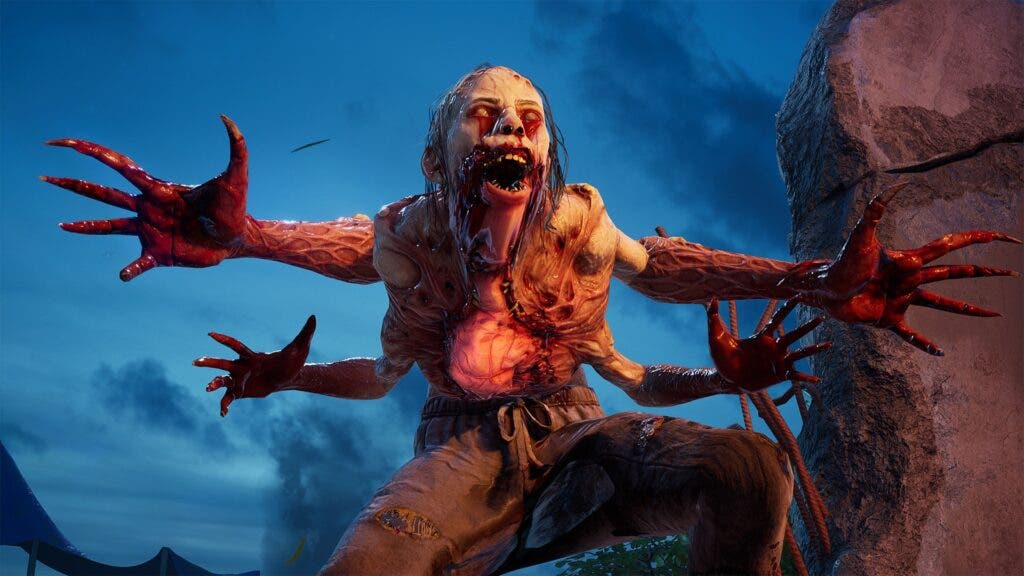 In order to keep things moving or balanced, there’s an AI director controlling the action or inaction. This also means that nothing is ever the same twice. Now if you mill about, the director will punish you by sending mini-swarms or full-on swarms to give you the hint to keep moving. There have been a few times where the director might’ve fallen asleep in their chair, but these respites are welcome from the chaos that’s likely to come. There are so many hazards and ways to alert the ridden, and send in the horde. From the birds to the cars that force you and your squad to stay quiet, take the long way around, and tippy-toe their way through an area. Stealth becomes second nature, even if that’s not what the game

The way the levels are broken up, Back 4 Blood offers lots of natural stopping points for you and your friends, without a need to bang your head on your desk, just to complete a campaign. Progress is saved with the host, who can resume the run at a later time. Losing is not the end. All supply points earned are kept to be used for progressing and growing more powerful with new cards after death. I really like this approach, as a lot of thought was given to giving players plenty of places to “save” and make progress at every opportunity. 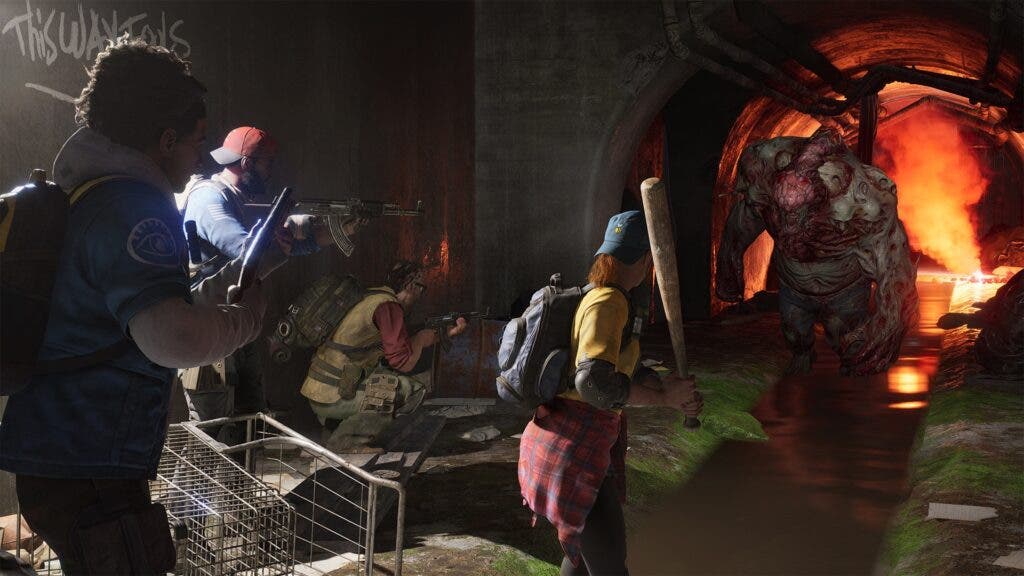 As someone who didn’t play the PVP Versus mode in Left 4 Dead, I’m not missing it here. Solo mode lets you play the game without help, but it isn’t offline as the game is always online. And this mode is bizarre. There’s no progression, supply points, or achievements to earn while playing this. It’s something that should be reconsidered for those who choose to play this way. There’s no downside by allowing them to play with those features enabled. I will say that what can be a bummer is the game often reuses locations, like going to a section of downtown that now the power is out. It makes sense in context, but can be disappointing as you progress into later acts and see the same places. Things revolve in and around Evansburgh. I do look forward to what the post-launch content looks like for Back 4 Blood, and the places we’ll go. 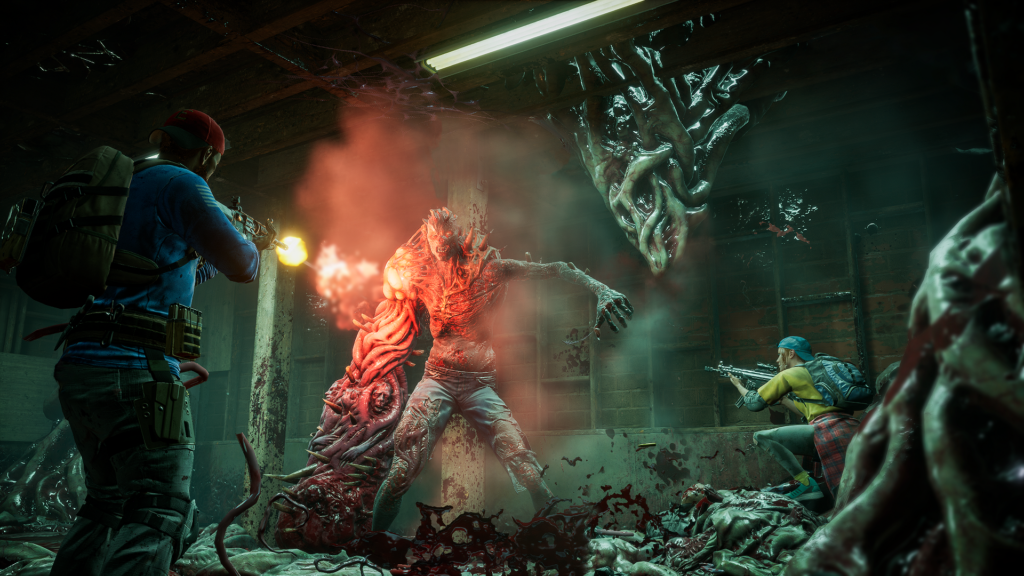 The audio is really well balanced with fantastic audio cues and sounds in all aspects. It also has a great use of licensed music, those who get to the bar level will know what I mean. And no matter the randomized song chosen here, it’s an a harrowing experience. It’s one level I intend to replay more than most. Visually this game is impressive, gorgeous, and saturated with color. Lighting is used to great effect here, with some places pitch dark. Only illuminated with a flashlight, gives a narrow view. Other locations are bathed in red klaxon light, or diffused light in a dense fog. The game supports NVIDIA’s DLSS feature, and it works exactly like you’d expect. The game is performant without it, but when it’s turned on you’re likely going to push max framerates all-around, making the PC version the preferred way to play. 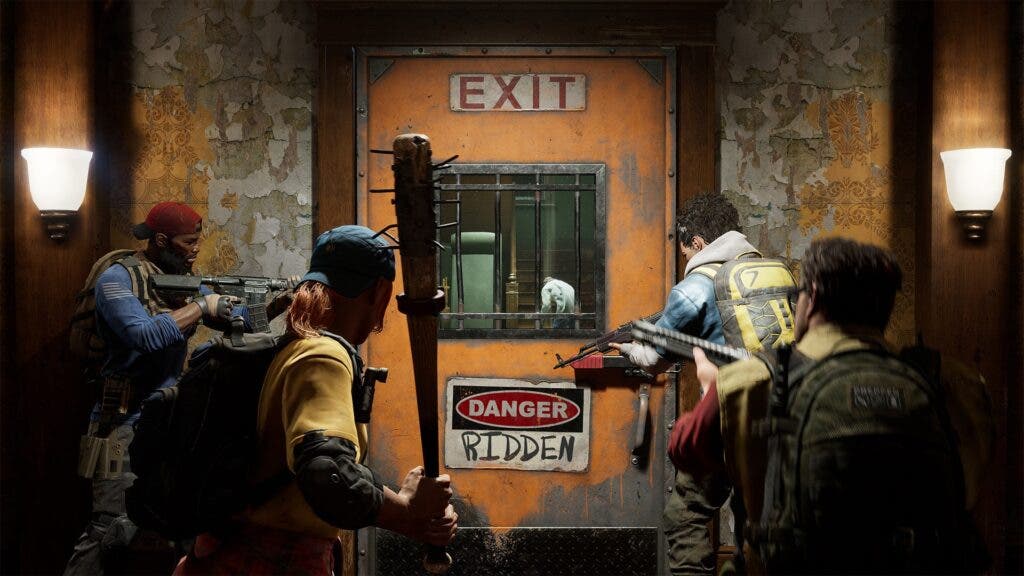 There’s simply more to do and see with Back 4 Blood. It recaptures the magic of Left 4 Dead with near-infinite replayability at greater depths. The lengthy roster and varied personalities of the cleaners are entertaining. The deck building system allows you to create a devastating hand, and the weapon modding lets you grow with the increasing challenge. As you progress through the game, the AI director keeps you on the edge as you barely survive each encounter. Turtle Rock does it again, Back 4 Blood feels like an evolution on the coop zombie shooter we haven’t seen in over a decade.