Lake is a relaxing breath of fresh air in a saturated market of tense-filled, stress-inducing, action entertainment. Completing the simple tasks they ask of you, delivering the mail is so peaceful and soothing. But along your journey to finish this game, you get to learn more about this little town and your character Meredith Weiss. 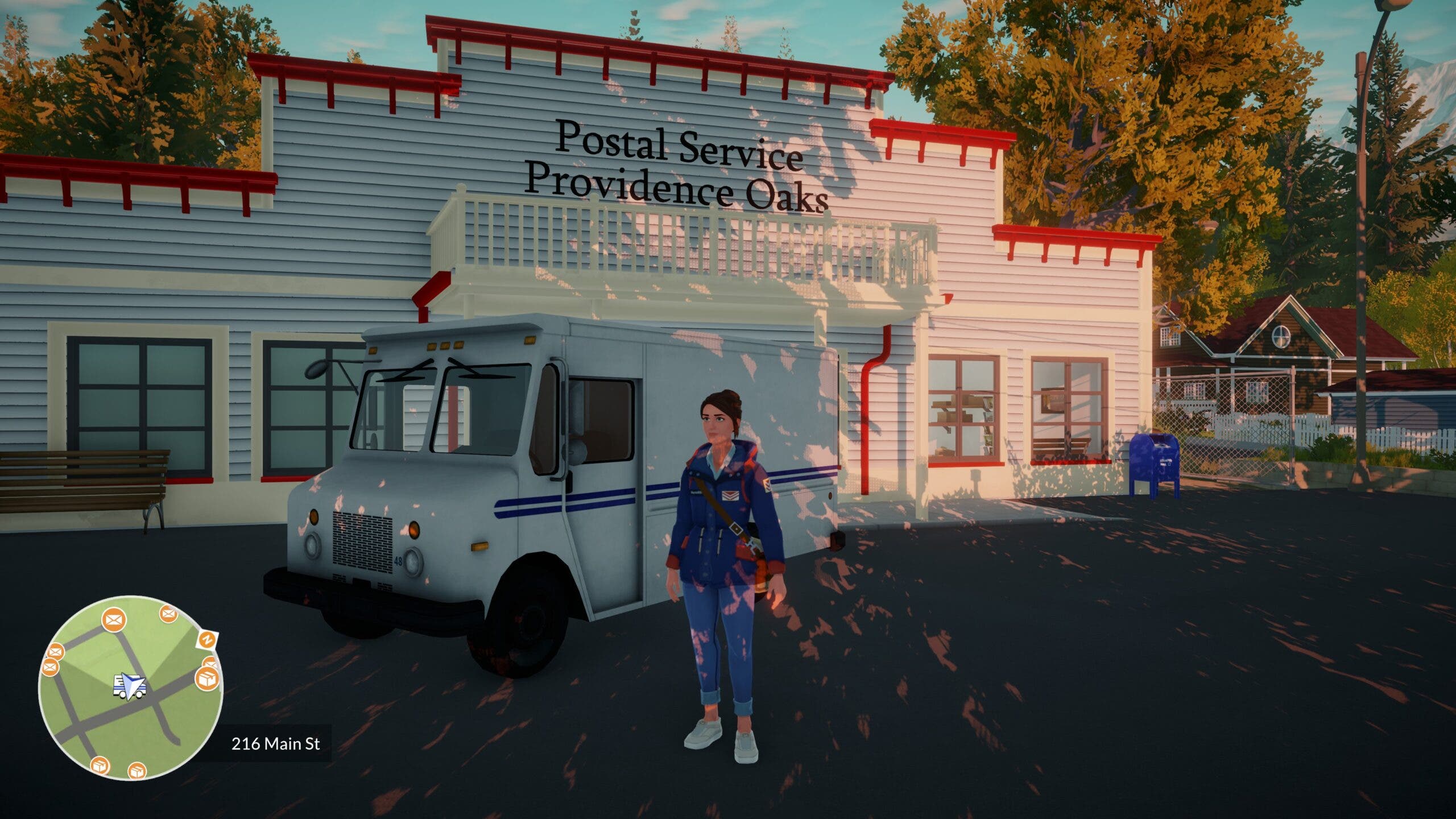 Set in Providence Oaks, a quiet little Oregon lake town in 1986, Meredith decides to come home and get away from her big tech job designing the hot new software Addit. It isn’t strictly a vacation, though, as she has promised to cover her father’s shift as a postal worker while they are out of town. As she delivers the mail, she gets to reconnect with old friends and make new acquaintances. You, as the player, get to decide where her life will lead and deal with the decisions made.

The primary loop of the game is to drive your mail truck to different houses and deliver mail or packages to them. You can’t knock things down, crash into buildings, or destroy anything while driving, but you can drive like a mad-woman and cross lanes of traffic, drive through yards, and drive in the wrong direction. I guess that no one minds as long as you’re in a mail truck getting mail to them on time. During your two-week stint, you start with few deliveries, and by the last day, you’re driving all around this lake town, dropping off letters and packages. The mechanics for deliveries are reasonably straightforward. Get out of the truck, walk up to the mailbox, and place deliver mail. Sometimes you’ll need to walk a package to the front door or inside a business. 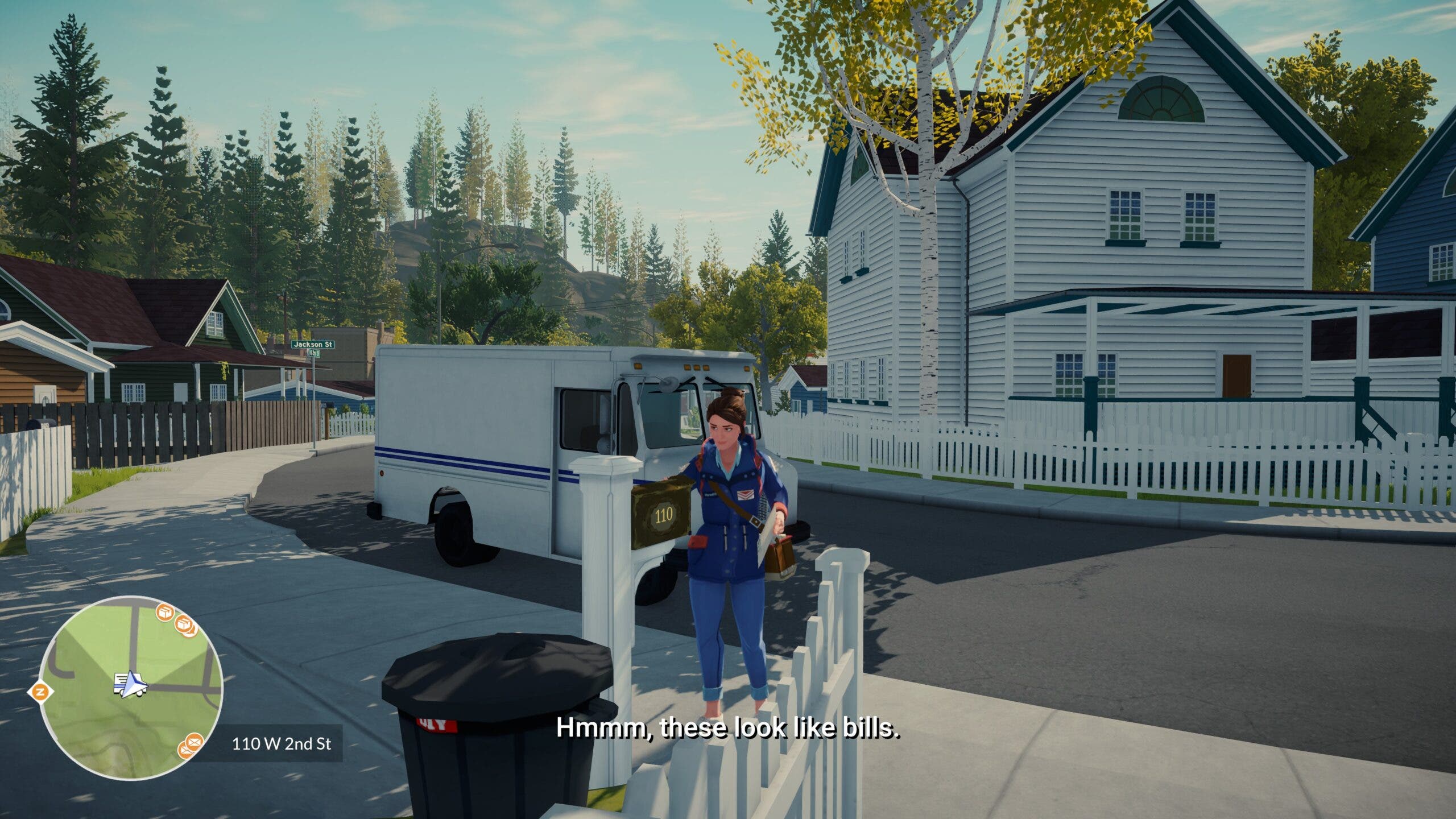 The package deliveries are usually where brief character interactions take place. During these interactions, you get dialogue choices that will affect the conversation and your relationship with that character. You could be having a conversation about plans for the evening, and it’s up to you how to proceed. Typically there are three dialogue choices: a polite, a blunt, and a snarky one. The system at play here isn’t quite Mass Effect Paragon or Renegade, but having my Meredith have a specific tone let me connect with her character more and gave me the urge to see where her story would go. 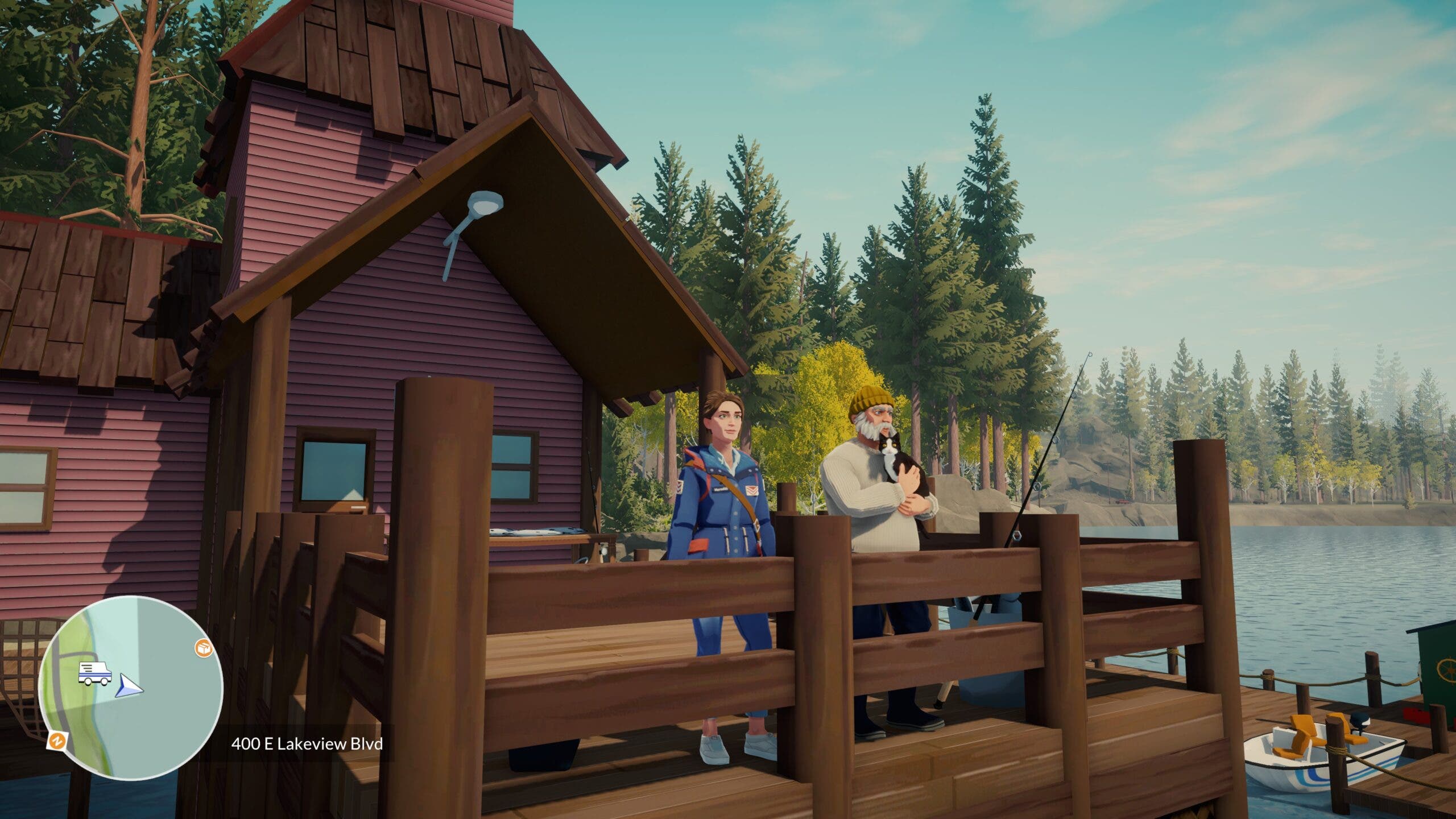 As you progress further, some of the characters will ask favors of you, leading to a few special deliveries or after-hours interactions that can advance friendships and romantic relationships. Some of these end up being optional and have no significant effect on the story. Speaking of the story, you’re going to understand the ending conflict for Meredith very early on. Still, even knowing how I wanted to end the story, getting to that point with my friends and relationships made for a very satisfying ending. I even surprised myself and did a little bit of a 180 for my final choice and ended up doing quite the opposite of what I was planning.

One thing you’ll notice very quickly is how vibrant and colorful the game is. Most days are beautiful and sunny; looking out across the lake is a gorgeous sight, and the art style of the characters and the surrounding town gave me a sense of joy and ease. Like I mentioned earlier, the game does an excellent job of feeling relaxing. 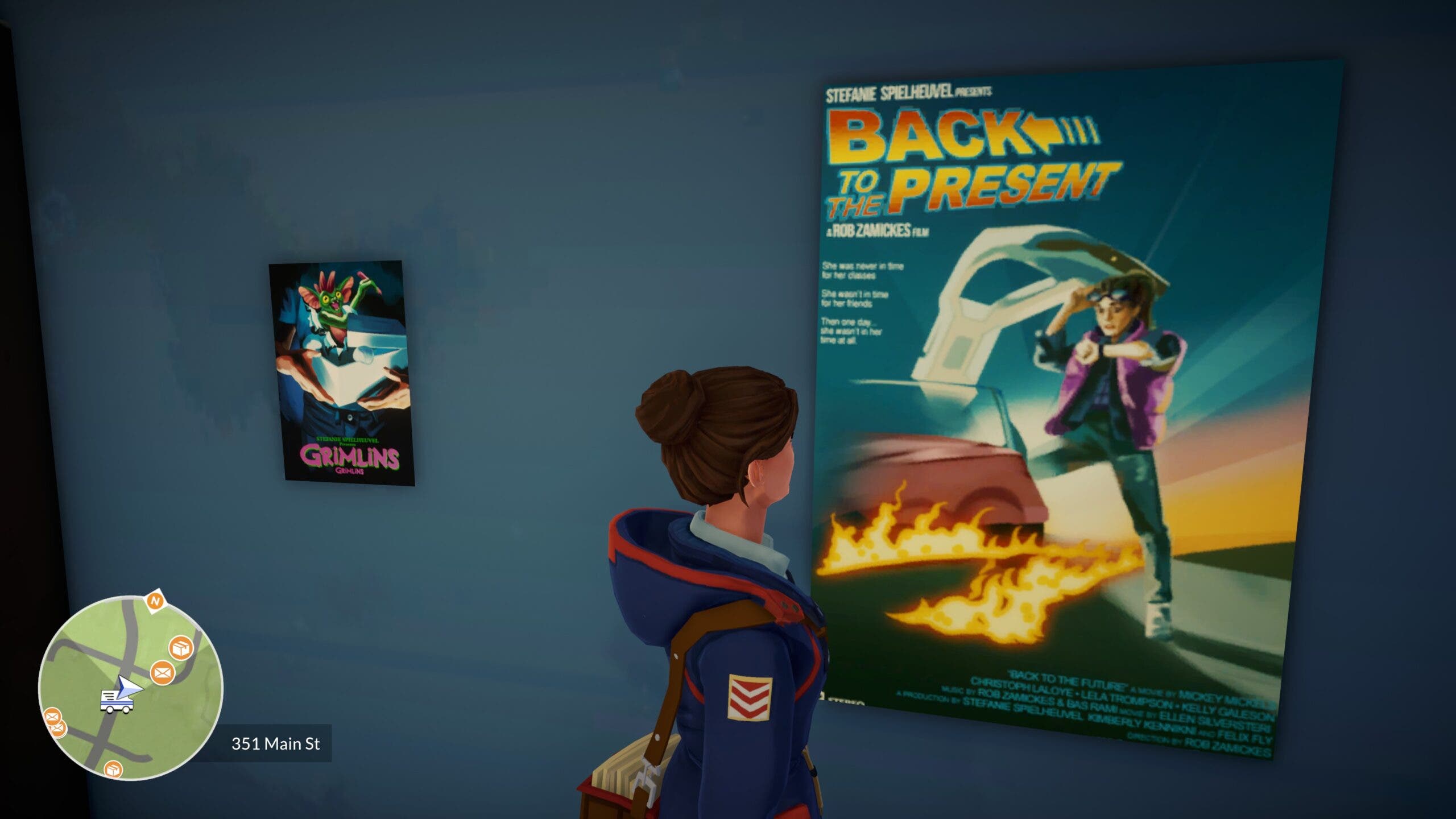 Some of that comes down to the details peppered throughout the game, like fake 80’s movies in the video store to the faux ’80s & early 90’s style music on the radio. I did find the music ok, at first. But there isn’t a lot of variety in the songs, so they kept repeating the same tracks. Also, if they were going for that era of Country music, as someone who grew up listening to that style, I don’t think they hit the mark. Don’t get me wrong, the tracks were fine listening, but I never got the vibe of that era of Country. 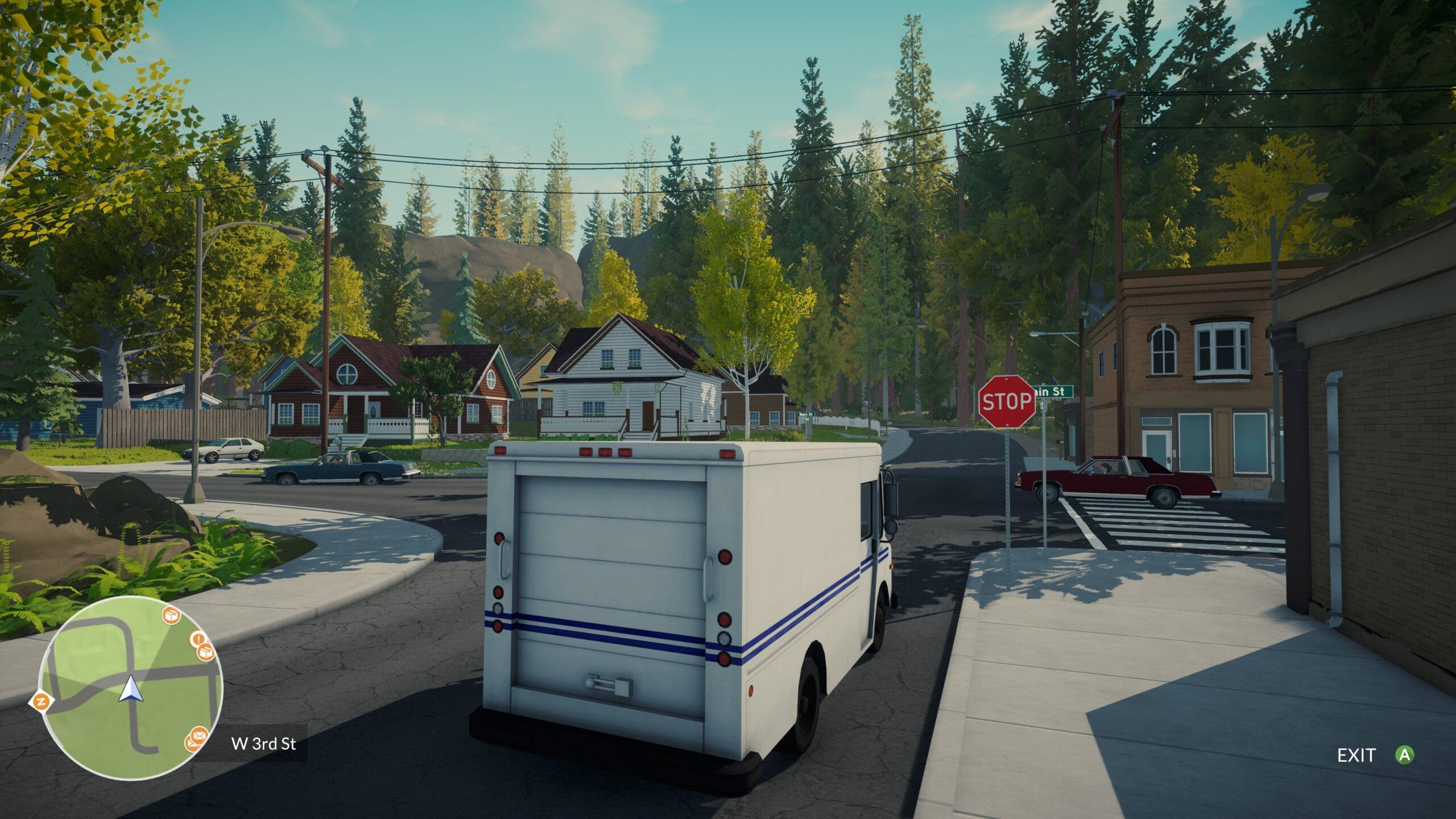 Delivering mail and driving around familiar streets helped set that relaxing tone. The unique interactions between Meredith and the other characters in Providence Oaks gave me the right motivation to play through and invest me in her tale. Lake isn’t just a game about delivering mail; Lake is about reconnecting, and it was quite enjoyable to guide Meredith to a life she will enjoy.