Alan Wake, Remedy Entertainment’s dark, moody horror adventure was originally released as an Xbox 360 Exclusive in 2010 to favorable critical reviews and slow initial sales. Its unique mashup of Stephen King-inspired horror in a setting strongly reminiscent of Twin Peaks and a healthy dose of deliberately overwrought narration earned it permanent adulation in the eyes of its fans, and over the following years (and owing to a release on the PC), it achieved cult classic status. In the wake of Control‘s popularity and the potential importance of its relationship to Alan Wake, Remedy have released Alan Wake Remastered for the PC, PlayStation and Xbox platforms. The Remaster seeks to re-introduce old and new fans alike to the story of Alan Wake while giving it a pass of modernization so its more palatable by today’s standards.

Having just replayed the original Alan Wake on PC only a year ago, I was pleasantly surprised by how well the art direction and most of the game holds up. It certainly feels like a title from 2010, but it is still extremely playable and enjoyable, with the exception of the pre-rendered cut scenes and many of the character’s faces looking dated. Mechanically, though, the original still feels pretty good on the PC, and I often felt myself wondering “if the game still looks this good, imagine a new Alan Wake using Remedy’s latest engine with fancy lighting and ray-tracing effects.” That being said, the original release on Xbox 360 does not hold up so well, and while it’s playable on the Xbox Series S|X via backward compatibility including FPS Boost, it still just isn’t quite the same level of performance.

Alan Wake Remastered feels like it came at just the right time (no accident I’m sure), both in terms of being a relatively quick follow-up to Control‘s “AWE” DLC, and landing this past October just in time for spooky season. And let me tell you, it is a really lovely version of Alan Wake and I am truly jealous of anybody getting to play this for the first time via the Remaster.

To quickly recap, in Alan Wake, you play as the eponymous character, a popular American writer made famous for his “Alex Casey” detective thriller novel series, but with his roots in writing for the horror TV show “Night Springs.” The game opens with Alan having suffered from a long stint of writer’s block, and he makes his way to the sleepy Pacific Northwest Town of Bright Falls with his wife, Alice, to see if a change of scenery and some peace and quiet can help get him unstuck enough to finish his new horror novel, Departure.

As the events of the game unfold, Alan finds himself trapped within a world of his own creation, living out the story of Departure himself and having to escape a mysterious force possessing the townsfolk and the town itself known only as The Darkness. You play as Alan, armed with a flashlight, a pistol, a pocket stuffed full of batteries, and occasionally a flare gun, and the light is your best weapon against The Darkness as you struggle to survive the living nightmare you find yourself caught in. Alan is far from the typical video game hero, and relies mostly on his wits, his flashlight, and his less-than-athletic lung capacity to get himself out of most scrapes. 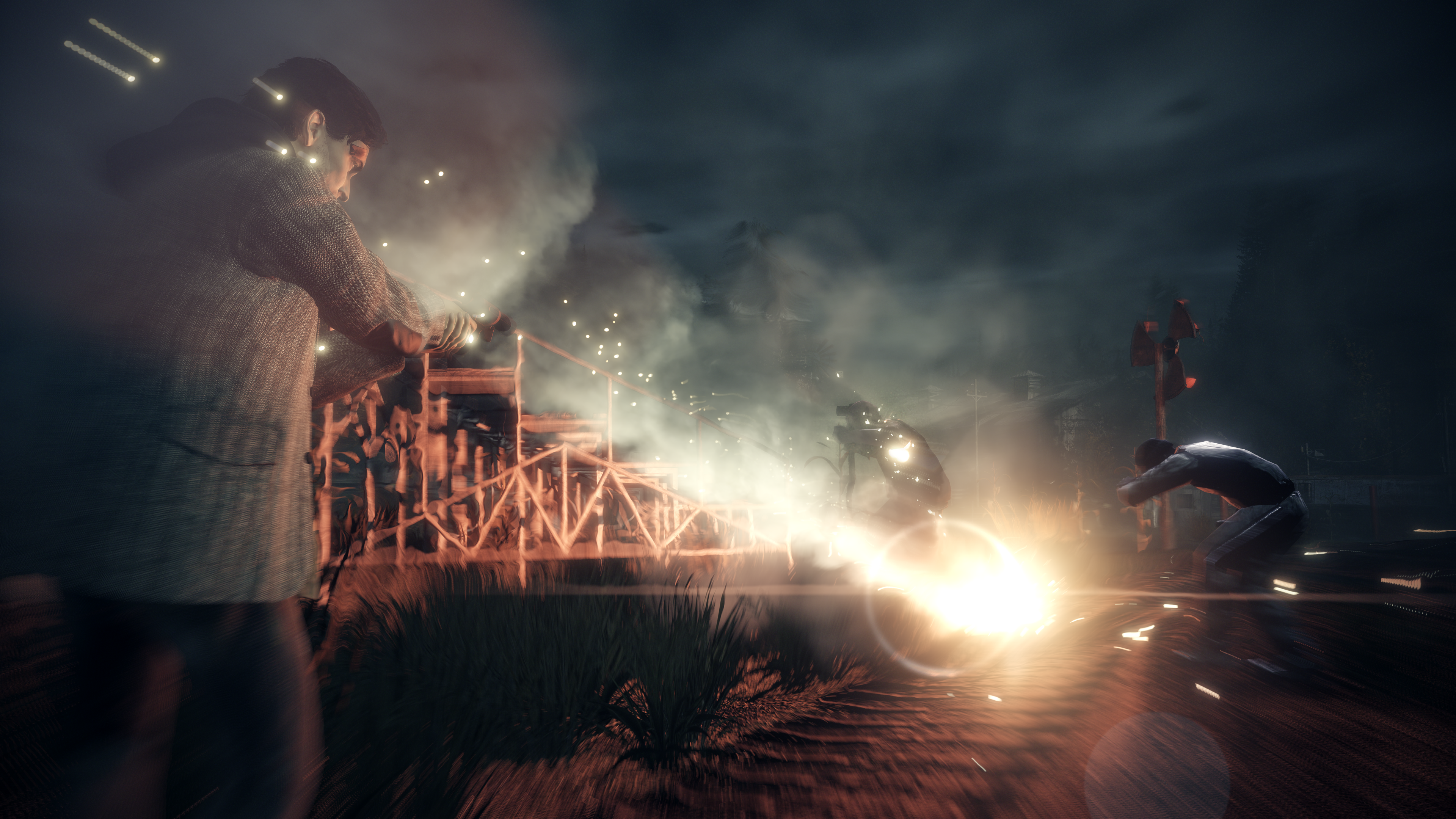 Sure, you’ll still be shooting at baddies, but there are plenty of scenarios where your best option isn’t to fight, but rather to run and escape to the safety of the nearest well-lit area. Alan isn’t necessarily the most relatable character to ever be written (especially not with his penchant for inexplicably shoulder-checking anybody who gets in his way), but it is fun to watch him be forced to wrestle with his inner demons as they literally come to life before his eyes.

Alan Wake Remastered seeks not to rework any aspects of the game, but rather to apply some very welcome polish in the areas that need it most. For consoles, this means 4K visuals at a smooth as butter 60 frames per second, and much higher resolution textures and art assets on all platforms. Of particular note is the effort put into updating the models and animations for characters and their faces, to the point where the game looks significantly more in-line with today’s releases, and it goes a very long way toward selling the “newness” of the package.

Similarly, all of the game’s pre-rendered cut scenes have been totally redone with the updated visuals and they ship at 4K resolution, so thankfully they’re not likely to show their ages as quickly as the ones that shipped with the original game. There are a raft of other subtle visual enhancements, a redesigned HUD and UI, all new Director’s Commentary, and use of the DualSense controller’s haptic triggers on PlayStation 5. The overall result is an excellent package that elevates the visuals to meet the quality level of the game’s writing and mechanics, ensuring that this version of Alan Wake will be easy for anybody to pick up and enjoy for another decade or more to come.

Also included in the remaster are both of the original game’s DLC packs, The Writer and The Signal, which are critical parts of the game’s narrative that help answer some lingering questions left by the core game’s ending, and help provide some useful setup for Alan Wake‘s direct ties to Control and likely setup for the all-but-confirmed sequel that is rumored to be in the works. These extra chapters received every bit as much attention and care as the core game did, and considering they are essential parts of the story, it’s excellent (even if expected) that they’re included in the package. Notably not included is any content from Alan Wake’s American Nightmare, which although important is not necessarily as vital narratively, and likely wasn’t technically feasible to just toss into Alan Wake’s codebase on a lark. Here’s hoping that will get a similar treatment at some point. 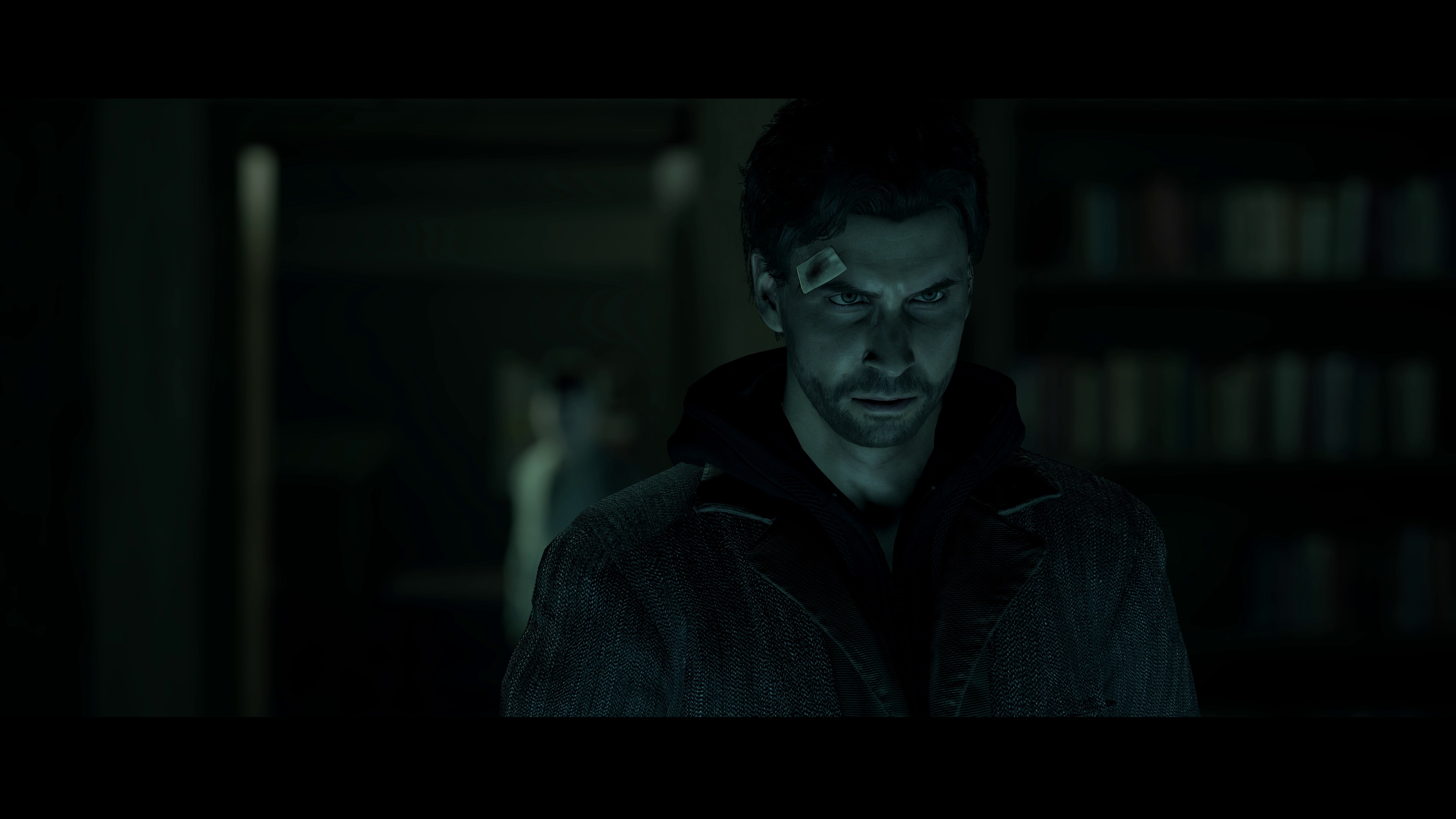 Alan Wake is a game that’s easy to get caught up in, featuring an atmosphere that’s rich and enticing, writing that is equally campy, charming, and exciting, and characters who are interesting and memorable, even in cases where they may be a little too directly related to their sources of inspiration. It truly is a thrilling experience, and while the game certainly still shows its age at times, it’s absolutely delightful to play through and this is easily the definitive way to do so.