Skating across the strata of ruined wastes of planets long ago pulled across the event horizon, leaping between outcroppings and weaving through ruined civilizations against the backdrop of impossible geology, you can’t help but wonder how you’ve never played anything like this before. From its striking first moments of staring down the business end of a beautifully rendered accretion disk and plunging straight into the Ultravoid on your interstellar skates, Solar Ash is oozing with style, grace, and all of the neon-drenched sci-fi trappings you can handle. The game tells a story of sacrifice and loss using exploration as its primary device, and traversing the void to uncover its secrets (and hopefully save your planet) is an utterly sublime experience. 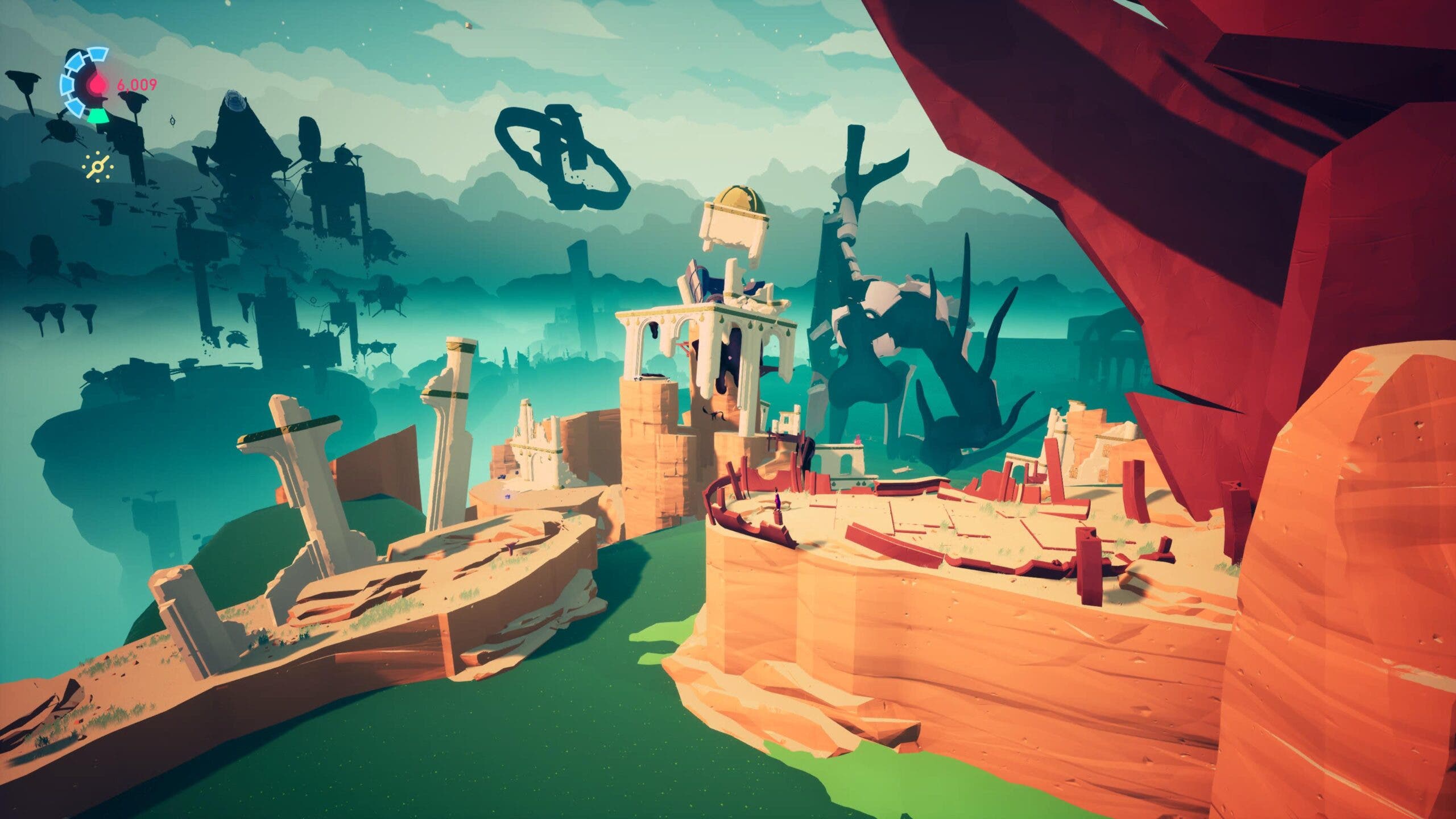 We’ve seen countless great examples of sci-fi trying to examine what lies beyond the unknown, and some of the strangest and hardest hitting successes are the ones that frame seemingly impossible concepts against the comfort and familiarity of life and reality as we know it (I’m looking at you, 2001 and Interstellar). While the “hard” science fiction options tend to be some of the most impactful, they don’t leave a lot of room for playing around with what could be. Solar Ash throws this right out the window and has a field day with the limits of possibility and doesn’t concern itself much with what probably is, which is the key element of its charm and success in ensnaring the player.

You are Rei, a uniquely skilled Voidrunner who uses her mysterious Voidtech gear to plunge into black holes for adventure and fortune, who must now enter the planet-eating Ultravoid that is on track to consume her home world to save it from certain destruction. Within the Ultravoid is a strange and exciting world full of danger and wonder, shaped by the twisted fragments of other planets it has devoured and sparsely populated by some wayward citizens who have been forever ensnared within. To stop the Ultravoid once and for all, you have to power up and engage the Starseed, another mysterious piece of Voidtech that purports to be the key to salvation but the inner workings of which are poorly understood.

Of course, it’s not as simple as powering up and pressing a big “save the world” button. The Void is teeming with strange malevolent enemies and Remnants, strange colossal creatures guarding each of its unique areas and preventing the Starseed from activating. Only weakening the Remnants and defeating them will allow Rei to re-establish her connection with Cyd, her AI companion, and gradually power up the Starseed. There’s also the minor issue of the giant, otherworldly entity known as Echo who can’t directly prevent Rei from achieving her goal but will throw everything in their power at her to stop her in her tracks.

It’s a game of high stakes and big ideas, and it sets the bar pretty high for itself. Every new locale you explore feels bigger and more mind-bending than the last, constantly increasing the sense of scope and grandeur you experience as you go, and helping underscore both the destructive power and the apparent longevity of the Ultravoid. Ultimately, the loop in each area is the same; you skate, jump, climb, grapple, and grind your way across the landscape collecting motes of Plasma (the game’s somewhat arbitrary currency) and searching out the various places the local Remnant guardian has rooted itself and beat it back to weaken it. You’ll uncover void caches left by other Voidrunners you know in each zone that tell the stories of their own journeys and can help you unlock new void suits with different passive abilities. There are also a few NPCs you can meet who give you optional side quests that encourage you to explore the Void more thoroughly. 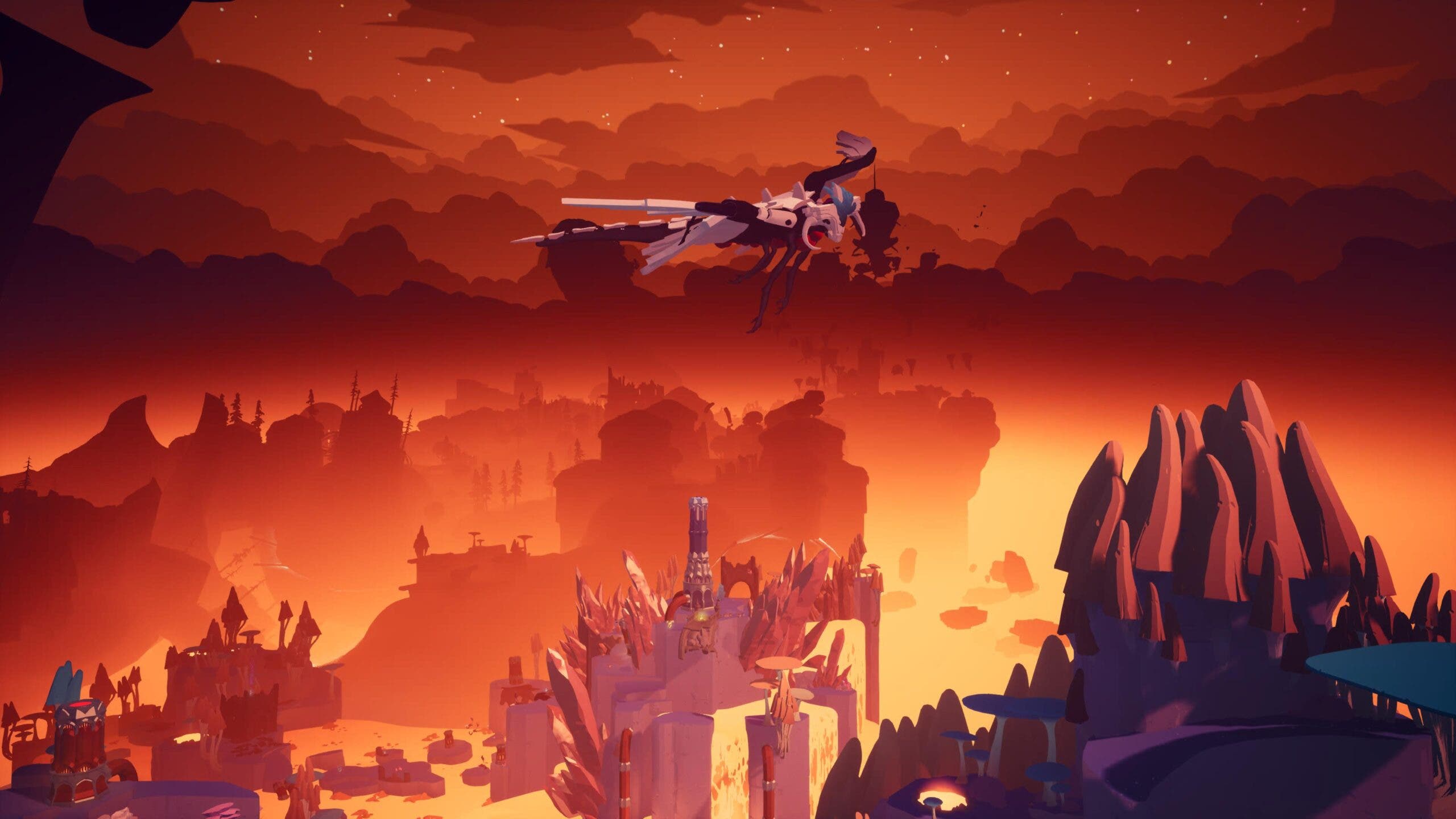 The exploration loop in each area culminates in an epic Shadow of the Colossus style boss battle that begins when you clear all of the local Remnant’s infestations and cause it to awaken in grand fashion. Seeing a Remnant descend upon the landscape and immediately trivialize everything in its vicinity with its sheer magnitude is a magnificent spectacle each time it happens.

The Remnant designs are some of my favorite parts of the game, as each one feels like a unique, grotesque creature twisted from the form of something recognizable, and the act of grappling onto their bodies and speeding across their flesh (which can kill you if you touch it) can be truly thrilling when everything connects. Admittedly, some of these fights can be frustrating as the speed and floatiness of Rei’s movement can sometimes be at odds with the precision maneuvers you have to execute, but winning feels like an accomplishment every time.

I will admit that in my first hour or so with the game, something wasn’t clicking for me. The movement felt really loose and getting my head around skating as the primary mode of locomotion took some doing. Similarly, combat felt a bit shallow and imprecise, so that encounters with the lesser enemies scattered around felt like a nuisance that impeded my ability to move swiftly through the world. Over time it became clear that much of that friction was intentional, because once I started getting comfortable with how to move Rei around I was zipping and soaring across the void with ease, and similarly the enemies became more set dressing than actual challenge in most cases. To be clear, moving through the Ultravoid feels great once you get the hang of it; the sheer speed you can build and the effortlessness with which Rei hurls herself higher and farther with boosts, jumps, grapple points, and death-defying leaps of faith is absolutely intoxicating. Solar Ash is a game of flow state and it’s relatively easy to attain. 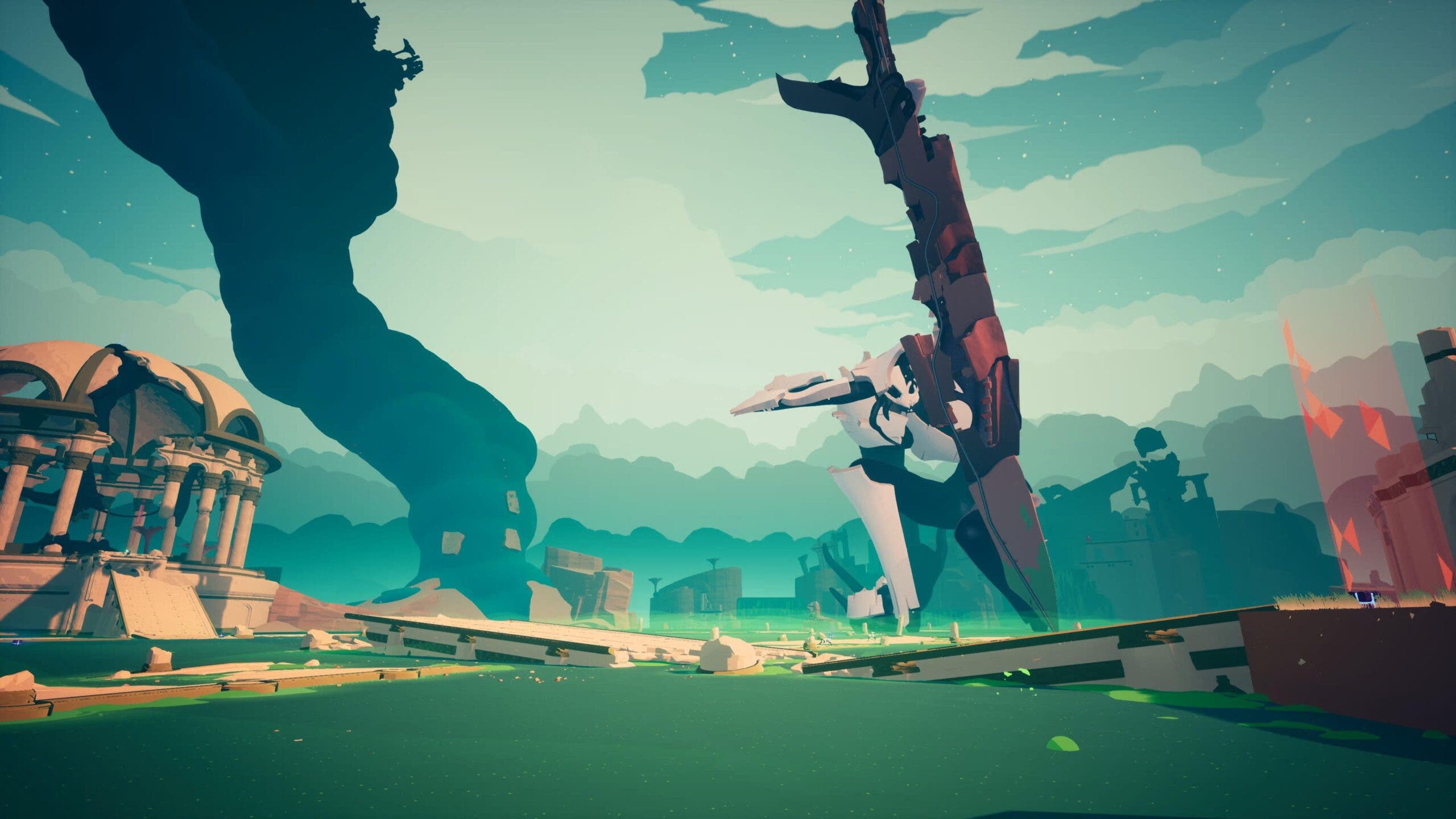 Combat becomes less of an annoyance and more just a minor diversion on your way from one objective to the next, and it feels like a more natural extension of the movement set as you add in the ability to use enemies as grappling points to cover distance in mid-air and weave them into your route as you jam across the Ultravoid’s euclidean-defying spaces. The deliberate choice to keep combat simple in the game is clearly meant to emphasize movement and exploration as the game’s primary focus, however I did find myself wishing that Rei’s combat abilities were just a smidge more substantial or interesting (as compared with something like Death’s Door, where combat is simple but just varied enough to keep it engaging).

To that end, as much as Solar Ash wants you to focus on skating around Jet Set Radio style, I wish that there was just a little more opportunity to push Rei’s acrobatics even further. There are some points in the level design where you have no choice but to slow down or even stop, which can feel jarring after stringing together a long series of rail grinds, flips, and jumps across treacherous suspended archipelagos. At times, this seems intended to force you to take in your surroundings, but others it’s more a matter of needing to reposition yourself to better tackle the next set of obstacles. I lost count of how many times the option for an air dash would have extended my movement streak, and while I’m sure not including one was a deliberate decision to avoid trivializing some of the platforming sections, its absence is notable and it stings.

Minor gripes aside, Solar Ash is a great ride that is equal parts chill and thrill, and it wears is many influences on its sleeve proudly. It borrows from the likes of Interstellar and 2001: A Space Odyssey for its exploration of the unknown world beyond time and space; Jet Set Radio Future for its movement and style; Shadow of the Colossus for its utterly massive boss battles. I also feel compelled to point out some very overt references to Neon Genesis Evangelion, chiefly in the design of the Remnants which feel like fighting the anime’s massive Angels, an antagonist that bears a strong resemblance to the otherworldly Lilith, and a final battle that may as well be at the heart of the Second Impact. What Solar Ash does well with its influences and weaving them into its world and borrowing from them in ways that allow it to create something that still feels fresh and original, rather than reusing ideas wholesale.

The experience of playing Solar Ash is both surreal and smooth, with bright, popping visuals, fantastic use of color and geometry, a distinct art style that is just begging to be drunk in, and an eerie soundtrack of strings and synth that pairs perfectly with the visuals and the setting. Performance on the PlayStation 5 is mostly consistent save for some frame rate dips in specific areas, for reasons that aren’t always clear. Most of the frame dropping I encountered came in the game’s first two areas, both relatively small and uncomplicated compared to later parts of the game where the levels open up to startling size and show off some impressive draw distances. There have been multiple patches since launch though, and while none of them mention these issues specifically it is possible that some of those issues have been smoothed over. 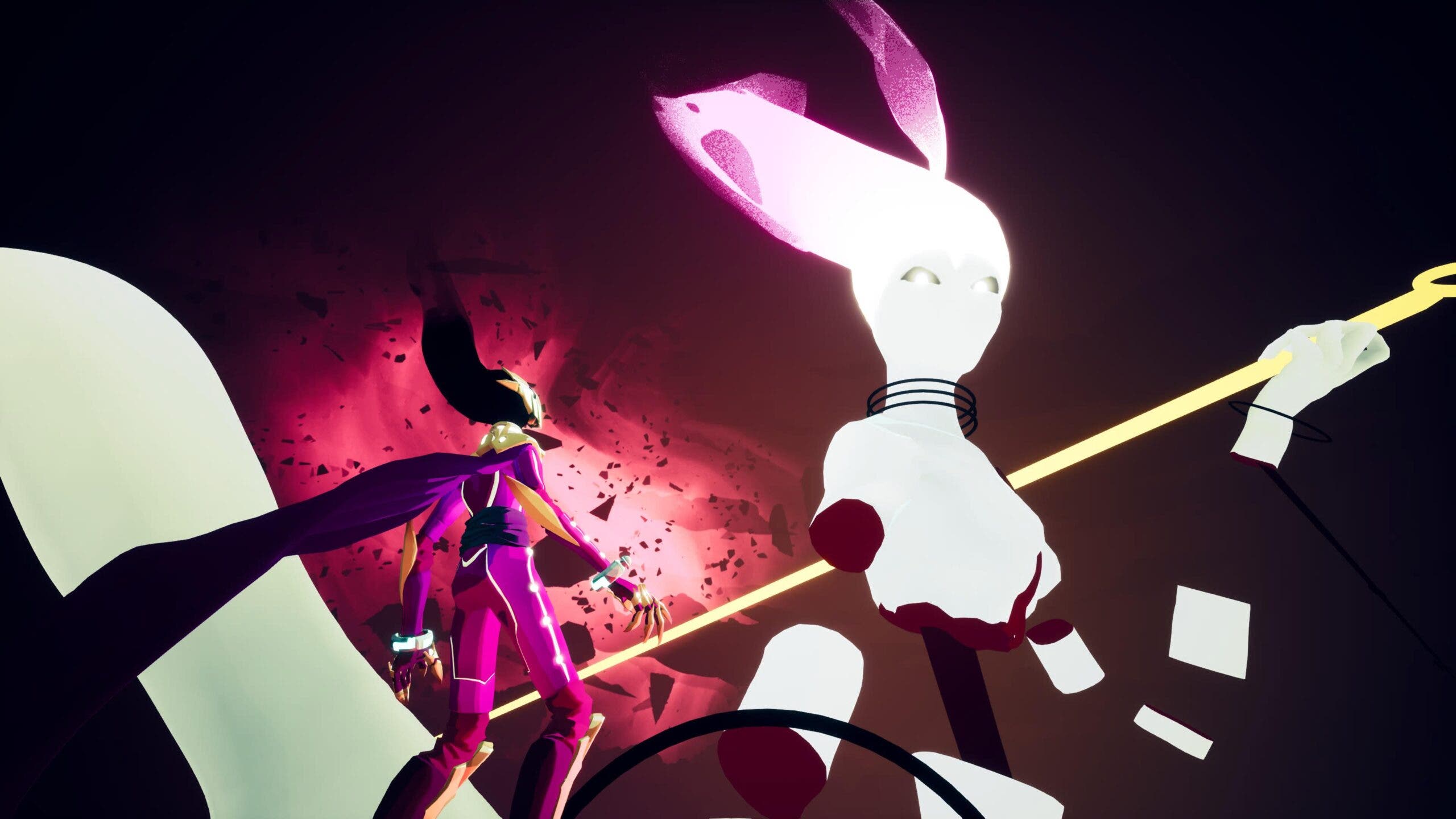 Solar Ash is a fun, fresh adventure that’s perfect for players who love getting lost in strange new worlds and being rewarded for exploring their every nook and cranny. Its tale is engaging enough to keep you moving forward (and backward, and up and down and every which way), and the final reveal is both well earned and well executed. It might not be the best game you play this year, but diving into the Ultravoid to explore it’s vast impossibilities and unearth it’s deepest secrets is an experience that shouldn’t be missed.