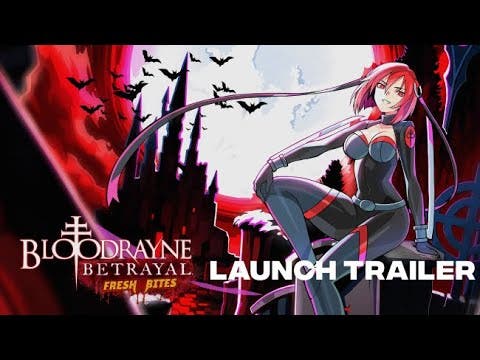 BloodRayne Betrayal: Fresh Bites remasters the 2011 original, out today for all platforms

BloodRayne Betrayal is improved from original, now on Steam

Iconic vampire vixen Rayne is back and blood-thirstier than ever in this revamped PC release of the smash-hit brawler. Originally released in 2011 on consoles, developer Abstraction Games has exhumed the lavish, artistic reimagining of the BloodRayne universe and topped it off with a fresh layer of polish for Steam players, all at a savory $9.99. Updates include increased precision for Rayne’s movements, re-balanced puzzles and challenges, as well as additional checkpoints throughout.

Who doesn’t like a good discount? A couple of Reverb Published games are on a hefty sale this week, so if you’ve been holding off – now’s a good time to catch up.

BloodRayne: Betrayalis getting its shot at a great deal on the North American PlayStation Network too!  As a follow up to the recent promotion in European territories, the critically-acclaimedBloodRayne: Betrayal is receiving a temporary price cut starting today, December 6, and going through December 13.  Now, the blood-sucking, vampire-decapitating 2D action will be available for 20% off!  It truly is the best time to take on the role of the ever-so-deadly half vampire, Rayne.

BloodRayne: Betrayal is a satisfying hack ‘n’ slash featuring Rayne, the original video game femme fatale, on her quest for vengeance. Developed by WayForward, this is another example of an amazing game rejuvenated and dialed up by the critically-acclaimed developer.

BloodRayne: Betrayal delivers over-the-top stylish action with a healthy dose of bloodshed. You are Rayne, the sexy dhampir with superhuman strength, speed, and agility recruited by the vampire hunting Brimstone Society for one last mission. The target is a lavish yet sinister ball in a secluded castle with plenty of dark surprises. With the help of a mysterious friend and members of Brimstone, Rayne must infiltrate the manor, take out the fiendish horde, and stop an evil master plot once and for all.