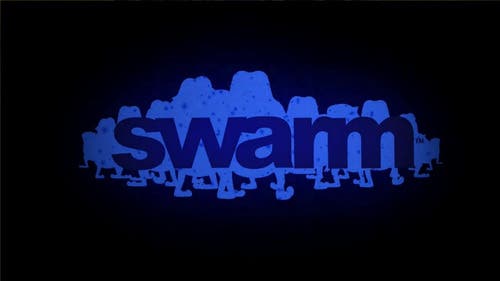 Controlling your minions in Swarm has gameplay that’s reminiscent of Pikmin on the Nintendo GameCube or Overlord in recent years. The difficulty quickly ramps up to that of Super Meat Boy frustration (at points). While it doesn’t require lightning-quick reflexes, it does rely on trial and error. And you will error, a lot. Death for your swarmites isn’t the end, but a means to an end. You see, you are rewarded to kill a few of your swarmites to help reach a goal or extend the combo meter. Kill too many and you’ll be reset to one of the bountiful checkpoints strewn across each level.

You have a few abilities at your disposal. You can press the right trigger to huddle your swarmites to stick together, build a tower by pressing A but at the expense of speed. You can press the left trigger to spread them out and move a much faster pace. Swarmites can pick up bombs to throw them at enemies or gates to open the way forward or pick up lights to illuminate their path. You may think it’s not very much in the way of abilities or systems to progress through the game, but these limited options are the key to your survival and keeping the combo meter up. The combo meter is absolutely essential to to progress. Each level has a set score, once beaten – you’ll gain access to the next level. Combos can be maintained by collecting little pink popcorns or DNA from broken objects or enemies. You’ll run across bigger DNA strains (5 per level) that are required to go to battle with the game’s bosses.

Death is as I said, more of a help than a hinder. Death Medals track how many and what type of kills happen to your swarmites. They will progress from nothing to Bronze to Silver to Gold. Once you get them all to gold, it does nothing but give you a nice, shiny achievement. But you’ll do this naturally you won’t have to go out of your way to do so.

The main menu let’s you experiment with death by simply pressing Y and the single swarmite on screen will meet an untimely and bluish, gooey death. It is quite satisfying when things aren’t going your way. Speaking of death and not going your way, as of late – the game likes to freeze up when reading the Leaderboards. I’m not going to hit the game too hard for this as it’ll likely get a title update to remedy this. I was able to bypass the issue by not being connected to the internet and therefore won’t read the leaderboard to freeze.

All in all, Swarm is a unique type of game well worth your money for this clever, unique, squishy, death-filled adventure.