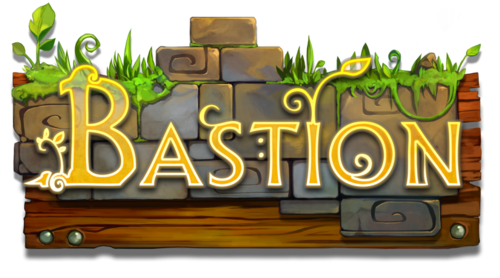 A new kind of apocalypse has occurred, named “The Calamity” and it has struck this beautiful watercolor world. You are the Kid – the sole survivor of the world that’s been shattered around you during your slumber. One thing that becomes apparent is that the narrator is not scripted in the sense that he says the same thing at the specific points of the game. Instead, the narrator details YOUR adventure as how you play it. With each movement or action, the Stranger as he comes to be known has something to say – each unique and not likely to repeat.

A common misnomer about Bastion, is that it’s just a hack-n-slash RPG to the likes of Torchlight or Diablo. It isn’t quite that, yes there is RPG-style levelling up, hacking and slashing – but there is no looting per se. You do find random items strewn about the land such as new weapons or items to mod the weapons into stronger, more powerful weapons. The controls are tight and fluid, allowing you to perform moves exactly as you want them to appear. Any damage done to you or deaths are a result of your actions alone. Supergiant Games developed a great control scheme, but assumes no responsibility if you don’t use it wisely.

The weapons are customizable in which you decide the button mapping. Standard setup is one button mapped to a melee weapon, and another button mapped to a ranged weapon. Once you get access to an Arsenal in the Bastion (which I’ll get to in a bit) or in a random location of the world. You can swap out your weapon set to other weapons you’ve found. Want to have two types of melee weapons or two types of ranged weapons? You totally can do that, and with ease and set which weapon you want on which button. You could just swap the melee/ranged buttons for ease of use. You’re also given a special ability that upon use drinks away a black tonic in your inventory – which can be refilled at Arsenals and dropped from enemies.

As immersive as Bastion gets with it’s story and universe, the story hits a cliche wall about half-way through to artificially extend the story. Once you get all of what you need to march ahead and fight the final boss – a thing happens requiring you to travel to more locations (previously unseen, at least) to retrieve more to actually go and fight the final boss. Luckily it only happens once and is told well in the story that makes sense, but it’s nothing you haven’t seen before. It is a video-game that you’re playing after all.

With each core collected, the Bastion grows stronger which in-turn allows you to get stronger as a result. There are 6 pieces to the Bastion that you must rebuild: The Forge, The Arsenal, The Distillery, The Lost-N-Found, The Shrine, and The Memories.

Idols appear around half-way through the game, and are like Halo’s skull system. You can activate them for enemies to regenerate health, or to block attacks, etc. It is used in an entirely new genre and is quite refreshing to see. I wouldn’t be surprised to see more games release with this customizable difficulty we’ve really only seen in the Halo franchise.

Something worth noting, one ability you always have enabled through pressing the A button, is the evade (roll). You can use this at any point, and change direction while rolling. It’s entirely common to roll off the edge. Doing so doesn’t result in a death, but rather a loss of health from your meter each time and some XP. It’s absolutely devastating at first, but subsequent times it’s frustrating because you know it was your fault. Some enemies have the ability to remove the floor beneath you, so you must be cautious where you are walking or evading to.

The story features combat quite heavily, but if you want all combat without any fluff, the wave-based levels called Who Knows Where might be what you’re craving.  Each level is comprised of 20 waves of enemies (each) to fend off for bonus XP and general combat experience. Also included in each of the three levels is some extra narration from the Stranger giving some more story (if you’re into that sort of thing). The idols come into play here giving you that extra challenge if you turn some or all of them on before starting an arena wave.

One of my favorite features of gaming is New Game+ which makes a welcome addition to Bastion. Completing the game on your first go, you’ll only each Level 5 or 6 out of 10 levels. With New Game+ you’ll be able to keep your experience, weapons, and carry them over. You’ll be able to build the Bastion in any order you like. Careful thought was taken into consideration for replayability, and with a few moral choices and achievement ahead of you – are driving forces to have you go ahead and start anew. It did for me and now I’m in my 2nd romp through.

An XBLA code was provided by Supergiant Games for Review purposes