Retro City Rampage will be playable at MineCon in Las Vegas this Friday and Saturday. Brian Provinciano of VBlank Entertainment will also be presenting the game on stage Friday at 9:00pm, giving the most in-depth public showing to date with many big reveals. Being shown off will be a Lucas Arts adventure game parody and the red-blue 3D glasses stages – showing just how much beyond GTA’s formula Retro City Rampage spans. Might even be showing one of the big indie crossovers!

Note that Retro City Rampage is finally in the bug fixing, polishing and tuning stage and will be out Q1 2012 on Xbox LIVE Arcade, followed by WiiWare (and maybe other platforms).

What is Retro City Rampage?

– Explore Theftopolis City at your own will

– RCR invites you to steal over 40 vehicles and outrun the law while mowing down your fellow citizens!

– Jump on pedestrians for coins, or use them for target practice with over 25 weapons and power-ups!

Whether you want to jump right into the action and cause destruction, or embark on the epic story mode and explore, RETRO CITY RAMPAGE has you covered! It’s bursting with over 80 story missions and arcade challenges of driving, shooting, stealth, platforming, questing, rhythm, and more all within the nostalgic open-world. 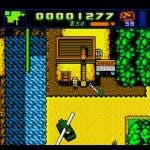 retro city rampage shown this we