Unveiled at MineCon 2011, Vblank Entertainment is proud to announce the first of Retro City Rampage’s official indie (or previously indie) crossovers. Splosion Man and Ms. Splosion Man join the Player as playable characters, enemies and allies. Never before have worlds collided quite like this, unless you remember “Archie Meets The Punisher” and “The Jetsons Meet the Flintstones”… which you don’t.

Splosion Man trips on a warp zone and ‘splodes into Retro City Rampage in sploding-edge 8-bits! Sidescroll through Big Science Labs then bust out to ‘splode over 40 vehicles and out-splode the law while ‘sploding friendly civilians! ‘Splode pedestrians for meat and coins, or use them for target practice when you find yourself with an explosive barrel deficiency.

The player had better bring some marshmallows because he’s about to cross paths with Ms. Splosion Man too, and she’s quite “bossy”.

Are you rad enough to ‘splode Theftropolis City in Retro City Rampage? 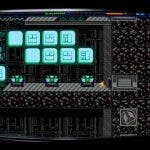