The sequel to Rebellion’s highly-acclaimed 2005 game Sniper Elite, Sniper Elite V2 continues to offer gamers the most authentic World War II sniping experience by putting them in the middle of war-torn Berlin amidst the frenzied final battle between German and Russian forces.

With an emphasis on learning to handle the anticipation and pressure of the hunt, players are forced to use skill, patience and cunning to achieve their missions as they find themselves facing life-altering choices.

The celebrated “bullet cam” from Sniper Elite makes its return and will be more gratifying than ever. Skillful shots are rewarded with a slow-motion sequence of the bullet running its full trajectory from barrel to target as well as featuring graphic detail of the effects of the bullet entering and destroying a target.

• Authenticity – The game features authentic World War II Berlin locations as well as vehicles, weapons such as the Springfield M1903, the Gewehr 43 and the Mosin-Nagant 1891/30 and uniforms modeled after the original versions.

• Use The Environment – The slightest changes in the environment need to be taken into account to move into the perfect position, observe the quarry, take the shot and slip away unnoticed.

• Snipers Choice – Players will often find themselves facing a choice of the perfect shot that leaves them catastrophically exposed or a more difficult route that means they can continue their mission. 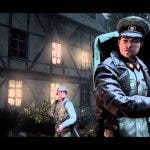