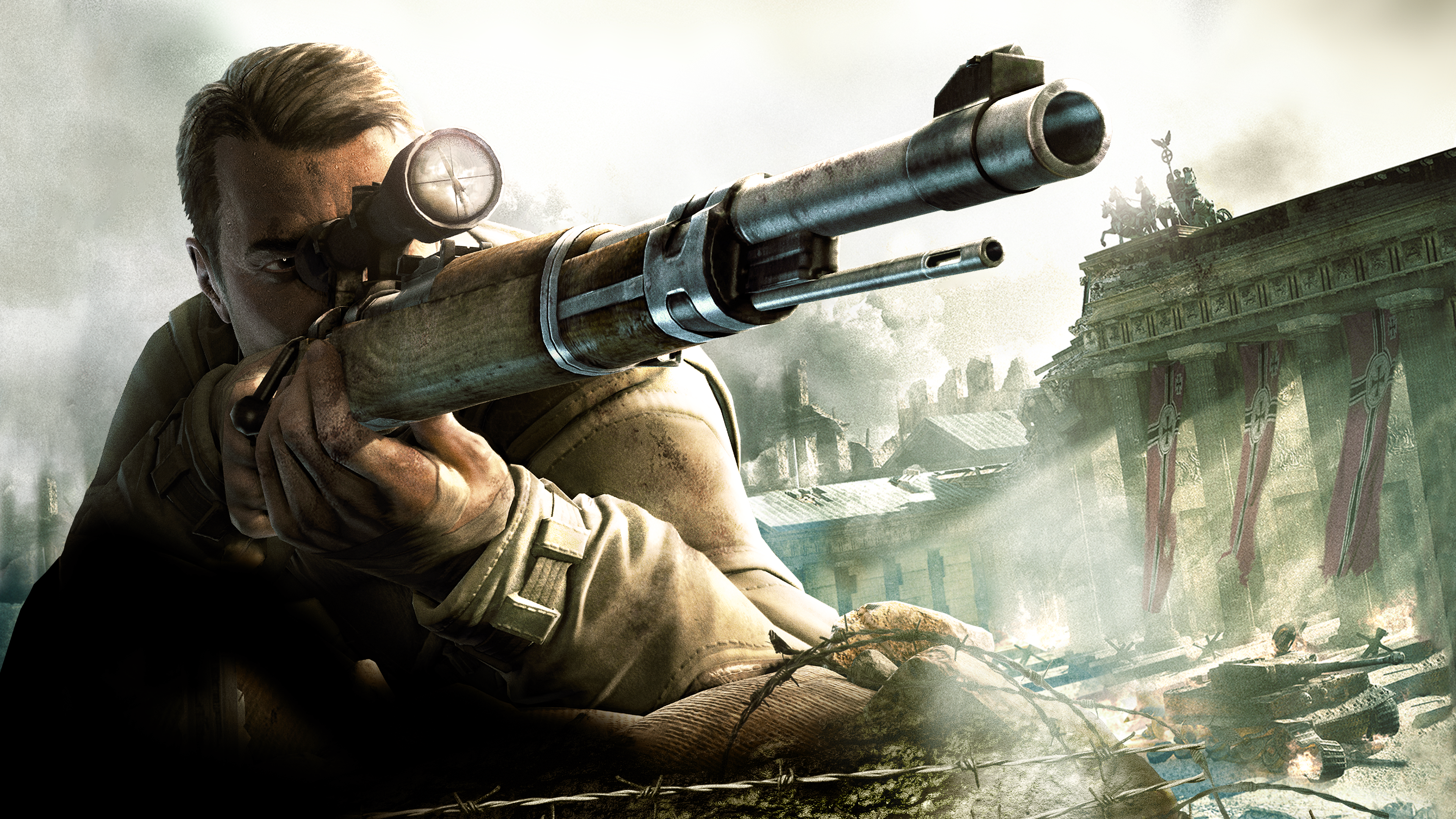 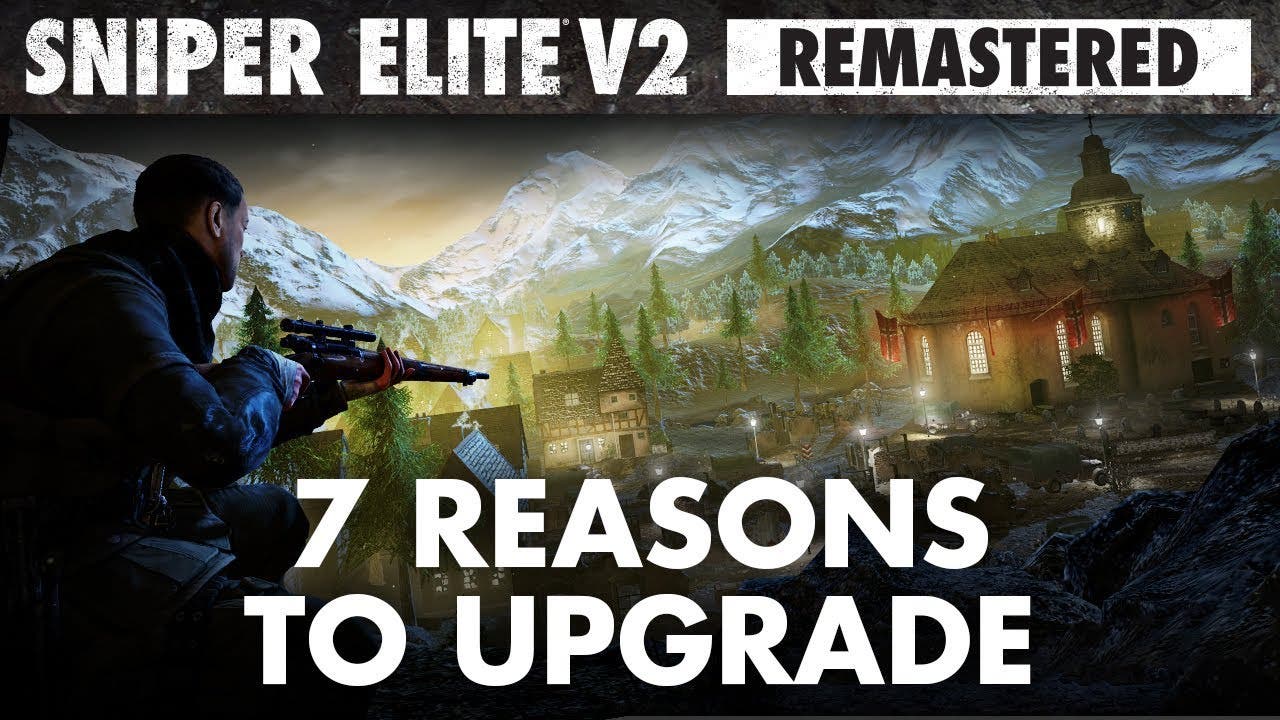 505 Games, a global publisher of video games, and independent game developer Rebellion today announced that they will be bringing smash hit Sniper Elite V2 to Nintendo’s new Wii U™ console with all new controls and a level of interactivity only possible with the Wii U™ GamePad™ touch screen.

Players will enjoy the same thrilling, visceral experience as they guide American OSS agent Karl Fairburne around historical locations throughout Berlin and attempt to unravel the mysteries and dangers of the German V-2 rocket program but now with even greater tactical depth and flexibility thanks to brand new functionality through the GamePad – tag enemies and booby-traps, track enemy locations and activity, even monitor the blast radius of planted explosives – all with a glance at the touch screen and without leaving the battlefield for even a second.

Jason Kingsley, CEO of Rebellion said “Sniper Elite is just the kind of mature game that is perfect for the different mechanics of the Wii U system. It’s been a challenge to get it right but thanks to our team and the fantastic support of our partners at 505 Games we believe we’ve brought the unique gameplay to a whole new platform.”

Sniper Elite V2 places an emphasis on learning to handle the anticipation and pressure of the hunt using skill, patience and cunning in order to achieve mission goals. Featuring detailed sniping simulation with advanced ballistics, gamers must use their environments and take into account gravity, wind, aim stability and more.  The celebrated “kill cam” from Sniper Elite makes its return and is more gratifying than ever – skillful shots are rewarded with a slow-motion sequence of the bullet running its full trajectory before the target is rendered in graphic x-ray detail, showing the bullet entering the body and causing lethal damage.

Developed by Rebellion, Sniper Elite V2 will be releasing for Wii U this spring. The game is currently available on the Xbox 360 video game and entertainment system from Microsoft, PlayStation®3 computer entertainment system and the Windows PC version is available for download at http://store.steampowered.com/app/63380/

Sources in the field report that German forces have established a secret fuel depot, hidden deep in the Harz Mountains. With reinforcements on the way we can’t risk an all-out assault so it’s up to you to take out their sentries, plant the charges and get out of there without tripping the alarms. I’m not going to lie to you Fairburne, this is by far the biggest mission we’ve ever sent you on – the terrain is much vaster, the enemy less contained and far more unpredictable so we’ve provided you with a new batch of weapons for this mission – the Type 99 Rifle, Blyskawica submachine gun and Tokarev TT33 Pistol. It’s not much but it’s all the edge we can give you for this operation.

You’ll need to have your wits about you to figure out the best course of attack. Good luck.

Take on the challenge of the all-new Neudorf Outpost DLC for 505 Games’ Sniper Elite V2 available today on Xbox LIVE® for the Xbox 360® video game and entertainment system from Microsoft for 400 Microsoft points and PlayStation®Network for $4.99.

In addition to the Multiplayer expansion DLC, a brand new weapons pack is available for use online and offline with the multiplayer expansion. Featuring the U.S. M1 Carbine with its improved rate of fire and high ammo count; German MP44 that boasts a high rate of fire and further effective range; and finally the high powered, British made Webley Mk6 Revolver with its very distinctive feel. All three weapons are available as a single download priced at 240 Microsoft Points for Xbox 360 and $2.99 for PlayStation Network.

Note: The Sniper Elite V2 Multiplayer Expansion DLC and weapons pack are available today on Xbox 360 and will be available on PlayStation Network on November 13.

“Rebellion is very excited to release this multiplayer support for console,” said Jason Kingsley, CEO of Rebellion. “We have always believed in supporting and building our games’ communities as best we can.  This is in part to say ‘thank you’ to dedicated gamers for buying our games and also to say ‘keep an eye out for our next big Sniper Elite announcement.’”

[box_light]Sniper Elite V2 is a third-person tactical shooter set in the dying days of WWII.  Published by 505 Games and developed by Rebellion for Xbox 360, PlayStation®3 computer entertainment system and Windows PC, the game has been rated “M” by the ESRB.[/box_light] 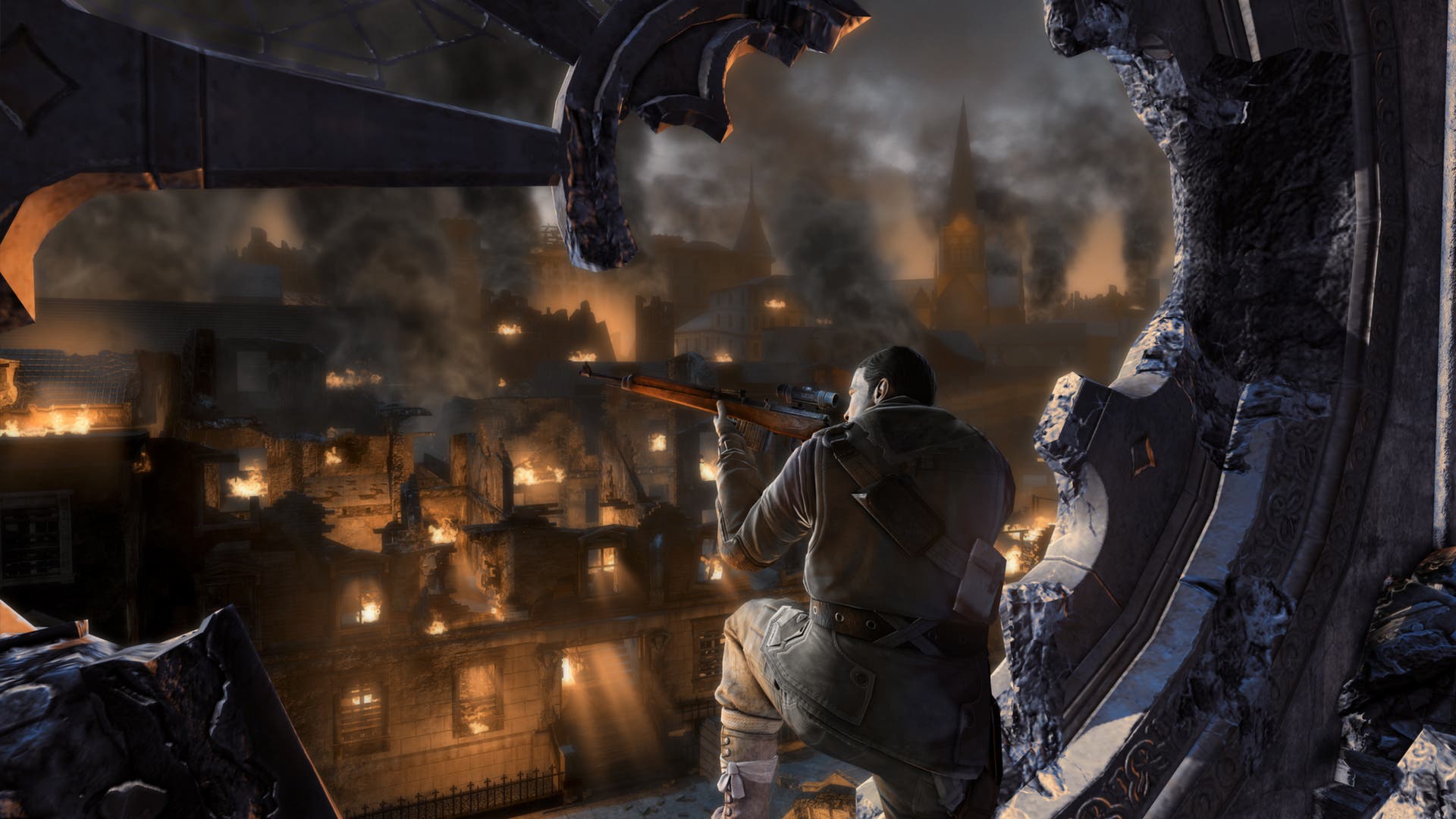 If you’ve read our PC review of this game then you’re well aware it’s a good game.  On most of the points Scott brings up, I agree, but I do have a few negatives.  Before I get to that though, I will admit I did not play on the highest difficulty as he did, but instead dropped it to a custom setting where the enemy skill was Rookie, ballistic realism was set to Realistic and the tactile assistance was set to full.  Since this game was already reviewed and the Xbox version is almost identical, I wanted to approach this from a “fun to play” aspect.

Sniper Elite V2 fans will be able to download the “Assassinate the Fuhrer” mission, previously available as a pre-order bonus only.

In this ultimate mission, players must use captured intel to intercept the Fuhrer as he makes his way Berchtesgaden to Berlin.  The window of opportunity to change history is very tight and you only get one shot so make it count! Players will also receive two new weapons – the Soviet semi-automatic battle rifle SVT-40 and the standard German service rifle Kar 98.

Launching on June 5 on the Xbox LIVE® online entertainment network for 800 Microsoft Points/$10 USD and the PlayStation®Network for $9.99 USD.

Sniper Elite V2 is a third-person tactical shooter set in the dying days of WWII.  Published by 505 Games and developed by Rebellion for the Xbox 360® video game and entertainment system from Microsoft, PlayStation®3 computer entertainment system and Windows PC, the game has been rated “M” (Mature – blood and gore, intense violence, language – content that may be suitable for persons ages 17 and older) by the ESRB.

Sniper Elite V2 players might not remember Sniper Elite: Berlin 1945 that came out on Xbox, PS2, and PC. Rebellion hasn’t made an exact replica of that game, it follows the same mechanics as it’s forebearer. Rebellion has also remade the Alien vs Predator games over the years in similar fashion.

505 Games, a global publisher of video games, and independent game developer Rebellion today announced that Sniper Elite V2 has shipped to North American retail outlets. A reboot of Rebellion’s acclaimed Sniper Elite from 2005, Sniper Elite V2 is a third-person tactical shooter set in the dying days of World War II.  Players take on the role of undercover American OSS agent Karl Fairburne who must stalk enemy prey across key historical locations throughout Berlin and attempt to unravel the mysteries and dangers of the German V-2 rocket program before it falls into the hands of Stalin’s Red Army.

Sniper Elite V2 is set in the dying days of WWII and is a next-generation reboot of 2005’s acclaimed original, Sniper Elite. The game weaves an explosive story of an undercover American OSS agent stalking enemy prey across key historical locations from the Battle of Berlin in a mission to unravel the mysteries and dangers of the German V-2 rocket programme.

Sniper Elite V2 has been developed by Rebellion for the Xbox 360, PlayStation 3 and Windows PC.  The game releases in North America on May 1 and has been rated “M” (Mature – blood and gore, intense violence, language – content that may be suitable for persons ages 17 and older) by the ESRB.

The sequel to Rebellion’s highly-acclaimed 2005 game Sniper Elite, Sniper Elite V2 continues to offer gamers the most authentic World War II sniping experience by putting them in the middle of war-torn Berlin amidst the frenzied final battle between German and Russian forces.

With an emphasis on learning to handle the anticipation and pressure of the hunt, players are forced to use skill, patience and cunning to achieve their missions as they find themselves facing life-altering choices.