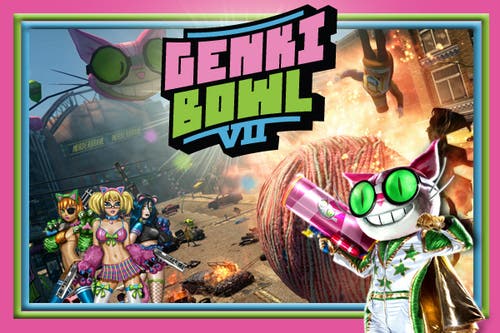 There is a Mayhem variant with a giant ball of yarn that you roll around the city. The yarn ball does not control well and gets stuck just about anything. First impression had me thinking to roll this thing around like a Katamari ball but it doesn’t seem to work that way. This might be a little more fun if the yarn ball responded better.

Finally, there is a new activity where you’re skydiving in a panda suit. The object is to earn enough points when you land. To earn points you dive through fiery rings and make stops on rooftops. The rooftops are full of mascots that you slice with a chainsaw and earn more points. In all, there are 8 activities, 2 a piece, to complete and once you finish them all you get a little cutscene at the end. It’s funny but not to the same caliber of the main game.

There are new achievements to be found with the DLC but I was able to get a good chunk of them just by finishing all the activities. Speaking of which, after finishing each set of the activities, you unlock homies and the giant ball of yarn, but if you’ve beaten the game already there is little point in any of that.

If you have the Season Pass like I do, all you can do is hope that the next two packs will actually include something worth your money. If you’re buying this for $7, I would hold off for a sale unless you really need something new to bring you back into Steelport.