A few weeks ago we revealed the Inside Xbox segment regarding Trials Evolution. Today, RedLynx (redlynx.com) released the first, full gameplay trailer for its hotly anticipated Xbox LIVE Arcade game, Trials Evolution. The trailer features the extensive single player gameplay and the jaw-dropping multiplayer that has made this successor to Trials HD one of the most eagerly awaited games of the year.

The trailer features the extremely powerful in-game editor included in the game and shows tantalizingly glimpses of some of the amazing things player will be able to create with it, and share with the whole world. The trailer also reveals that Trials Evolution will be released this Spring. A more specific release date will be announced after the game enters certification and gets closer to launch.

• Customize your bike and rider’s appearance 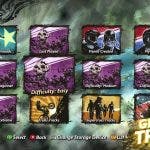