Orcs Must Die! 2 begins just days after the ending of the original game. With the rifts closed and the magical Order dead, the War Mage finds himself suddenly thrust into a new battle against the mindless orc mob. He has a powerful, if questionable, new companion in the Sorceress, an ex-War Mage responsible for the destruction of the Order. Orcs Must Die! 2 will be available on Steam on July 30th, 2012. 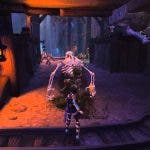 Orcs Must Die! 2 is an action-strategy game that challenges players and their friends to team up and defend a world constantly under siege. Orcs Must Die! 2 will be available exclusively as a digital download on personal computers this summer. For more information about Orcs Must Die! 2, please visit http://www.OrcsMustDie.com.