After the first day of Comic-Con came to a close, Ubisoft released some additional footage from Assassin’s Creed III.  The footage follows our Native American hero Ratonhnhaké:ton, who adopts the name Conor, as he goes through Boston.  The walkthrough of the town is narrated by creative director Alex Hutchinson. He gives gamers an extended look into busy Boston and how Assassin’s Creed III looks in cities of Colonial America.  Also, new screens from Multiplayer have arrived as well.  They’re booooootiful! 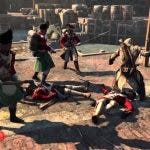