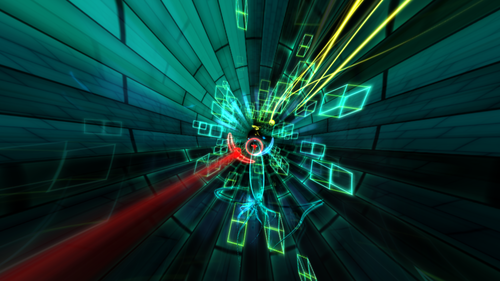 From the outset, you might think Dyad is some sort of tempest clone, and you’d be wrong. Dyad has a lot more going for it than videos might let on. The ever-evolving gameplay keeps the training wheels on for a few sections. Then slowly and methodically, it removes the screws and one wheel at a time. Soon you’re riding free and performing near flawless sets.

Dyad is a game of many objectives. Each level has a task for you to complete such as hooking, which is pairing a group of same colored shapes together to earn boost as you have to race to the end. Or perhaps you’re grazing geometry after blasting them to juice up your lance ability which allows you to pierce enemies at a frighteningly fast pace. All of these objectives get mixed and matched with varying difficulty. Button mashing is often not recommended by the game and will only increase the chances of Retrying the level over and over again.

Across the 24+ levels you’ll be anything but bored as you’ll be striving to earn the coveted three star score as the game considers perfect. You’d think the game is building you up to a concept that will employ all tactics at once in some sort of Guitar Hero or fighting game combo string, but it just ends beautifully and blissfully as a reward to making it and able to relax.

The audio/visual treatment drives the game as well as menus. Little notes play as you transition between sections. It might even play a song if played in the right order I haven’t fully decoded, but nonetheless it sounds good. Take note of the warning at the beginning of the game as no other game really is dangerous for epileptics than Dyad. The music itself is chill and lulls you into a false sense of security while playing, but the action intensifies as you are trying to satisfy the passing goal of each level.

One of my favorite modes for each level is the “Trophy” which is a handcrafted goal for you to complete to actually earn the trophy on the PlayStation 3. They are much more difficult than the standard goal that the “Game” levels ask of you. They aren’t overwhelming, but demand a higher level play and attention rather than zoning out. There’s also a “Remix” mode in which you can mix and match options to customize and play the level to earn another three stars on.

There were times that onlookers questioned whether I was playing the game at all. This is to the game’s credit as it provided such a smooth and fast gameplay experience with minimal interference that would look categorically as a “game”. Dyad is a game through and through, but can double as one hell of a psychedelic fever-dream inducer or tie-dye pattern designer.

Dyad is audio and visual overload in full splendor. When you learn the systems and understand the goal for each level, you fall into a rhythm that is joyous. The game is devoid of bugs and quirkiness that might hamper your enjoyment. Though at times it can be very hard to see what you’re doing as colors and brightness flood the screen, causing you to miss items and eventually your objective. These things can be overlooked once you realize you’ve lost a few hours of time to Dyad.

A download code was provided by the Developer for review purposes