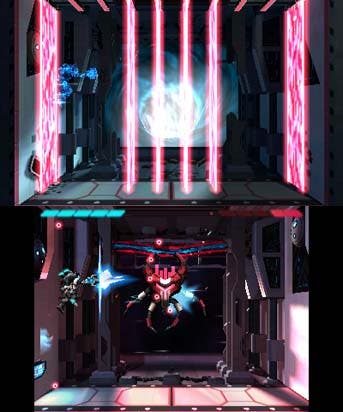 Like standard fare platforming titles, Fractured Soul has you running, jumping, and shooting enemies on your way through the vast amount of levels. The actual platforming isn’t too difficult early on and the placement of enemies and obstacles keep these early levels fresh.  Although, do expect a challenge as you progress as they start tossing everything, including the kitchen sink, at you.  Add into the mix that you only have 5 bars of health and falling in a pit takes you to the most recent checkpoint and this becomes a challenge.  Speaking of starting over, the checkpointing is well done and I commend Endgame for making the respawn spots relatively close to where you died. That saved my sanity so many times.

What makes Fractured Soul different than your main platformers, like Mega-Man, is the use of both 3DS screens concurrently. To solve the games various platforming puzzles, you’ll need to have a keen eye and focus on the differences and similarities happening on each screen. For example, you’re running down a corridor and focused on the top screen you see a ledge just out of reach.  You look down at the bottom screen at the same scene but there is a pole you can jump to. Use the shoulder button to switch screens and now jump to the pole and jump up.  Puzzle solved.  Eventually they become even harder to where you have to switch from one screen to the next and back with factions of a second to spare. Oh and just to throw a wrench at the player, the physics of the worlds in the top and bottom screen can end up being drastically different. That’s not all Endgame has cooked up either; along with the platforming are shoot’em up (SHMUP) sections that mix things up a bit. Thanks to the constant switching from screen to screen, platforming, and the SHMUP stages, the game becomes quite a unique challenge.

If you’re looking for a game with replay value, I don’t think I would recommend this title. Other than trying to clear a level in a faster time there isn’t much else to look forward to here. There are secret items to locate that will require thinking skills and quick reflexes to reach but the only other thing that would have you come back to a level would be the online leader boards.  You can check the fastest times globally and those of your friends, so if you like to be quite the competitor and brag about it to your pals, well you can.

Maybe it’s because I’m partial to the bulky armor suit look of characters like Master Chief and the Terran Marines, but the character design of the antagonist here is really well done. It shows better in the artwork for the game rather than in game itself though. The character models and environments are 3D modeled and looks fine but it’s nothing impressive; graphically it looks like late DS or iOS.  Can’t blame them for trying though, I think a more 2D look with 3D elements would have suited this game nicely.  Even though it’s on the 3DS, there is no 3D support so if you were worried about having to play in 3D, worry not, they have saved your battery.

There really isn’t much to say about the music other than it’s there. There wasn’t anything that caught my attention or stood out, but the soundtrack consisted mostly of synthesized techno. Fitting for the environment and world the game takes place in but it just didn’t get me tapping my toes or excited in any way. Thankfully it wasn’t bad because it would have been a shame to have played this game muted since the sound effects are actually pretty well done.

Fractured Soul works, and it works well.  It’s fun, it’s challenging, and it’s addictive. Miss a jump because your eyes were focused on the wrong screen and you find yourself just doing it again, and again, and again, without even realizing where the time has gone. The price is too high, even by the standards in the eShop, and because of that I feel that a lot of people will end up ignoring this creative title. It’s good, just not $12 on a 3DS good.  I do hope the game sells well enough that Endgame gets a chance to work on an improved sequel for maybe, dare I say it, WiiU.