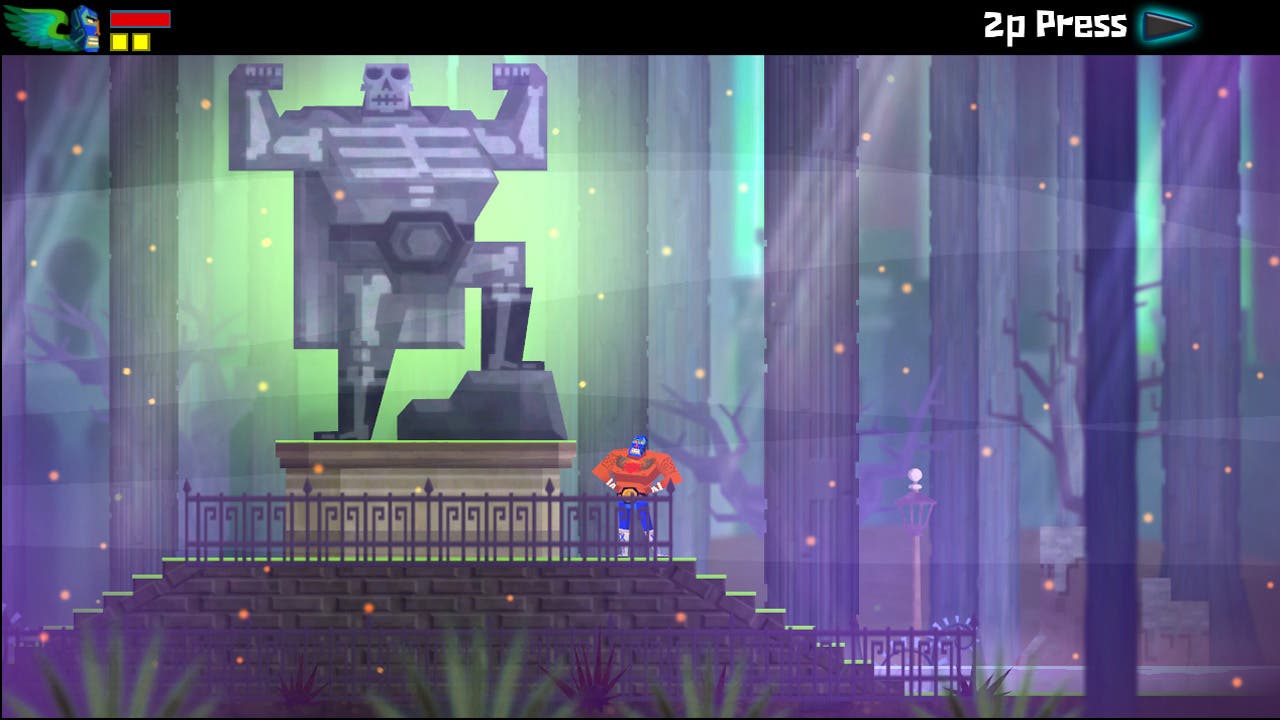 The action gets underway quickly when Juan, who narrowly escapes death. He is taken to the Underworld, and escapes, becoming a super-powered Luchador that is the savior of a small town in Mexico. Comparisons can be made to the hybrid genre, “Metroidvania” as this game very much is. You’ll traverse an open-world, wall jump, transform, collect new powers, and even go between planes of the living and dead.

As you go through the main town (a place where no enemies spawn), you’ll be able to take on optional sidequests that require you to find lost members of a mariachi, recover a missing item that belong to a child, and so on. These sidequests reward you with coins, health or stamina shards that extend their respective bars. Of course, finding these upgrades can also be done out in the wild, in tucked away locations that require a certain path to achieve the spoils.

Powers come pretty quick, but not overwhelmingly so. A comical title card comes up as you earn new powers, even if there are no new powers. As you traverse the land, you’ll see areas literally blocked off, by color that hide different paths or secrets beyond. Blocks and enemies in red can be overcome by using the uppercut power. Items in yellow can be taken out by a headbutt. In true Metroidvania fashion, you’ll be backtracking to past locations to find every nook and cranny for coins and health and stamina upgrades.

At checkpoints indicated by purple shrines, purchasable items that boost health regen, stamina regen, or even boosts for co-op are for sale. Additionally, you can purchase new wrestling moves like a suplex to increase your combo score.

Combat is swift and smooth, complimented by the art style with a bevy of complex moves to be earned, unlocked, and used to your benefit. It becomes a ballet of Mexican wrestling as you transition from enemy to enemy building up your combo for more money. Everything is colorful, and moves fluidly whether Juan is running or jumping. Juan’s equivalent to Samus’ ball form is something to be seen to be believed, and is a comical and very interesting way to make it fit into the world.

Environments share the wide palette, even as you access portals or swap into the Underworld. It switches from bright colors like yellows and oranges into purples and dark blues and teals. Trees become withered and skulls have illuminated eyes. It is easy to tell which plane of existence you are in.

Local co-op allows a second player to help you progress, Tostada. When only playing singleplayer, she will assist you passively, but all work will be actively done by you. Between the both of you, jumping puzzles and traversal gets accelerated, cutting down on the overall time spent. On PS3 only, there’s a way to exclusively play as Tostada. By turning on a second controller and pressing R1 twice on controller 1.

I don’t didn’t have PSVita, but at times I certainly wished I did. It is the perfect game to lay down and play. In the menus, you can Upload or Download your save to the Vita. It’s only a couple of steps manually. Having this be handled by the cloud, might be more problematic than it is worth, with the potential of losing your save.

Guacamelee! is a genuinely funny, filled to the brim with references, is quite an entertaining game that you just don’t want to end. Whether you’re bringing in a second player locally or replaying the game on Hard, there’s tons of value here as a Crossbuy and Crossplay game for PlayStation 3 and PlayStation Vita. Drinkbox Studios has put tons of flavor into this little downloadable title. It absolutely should not be missed.

A PSN code was provided by PR for review purposes