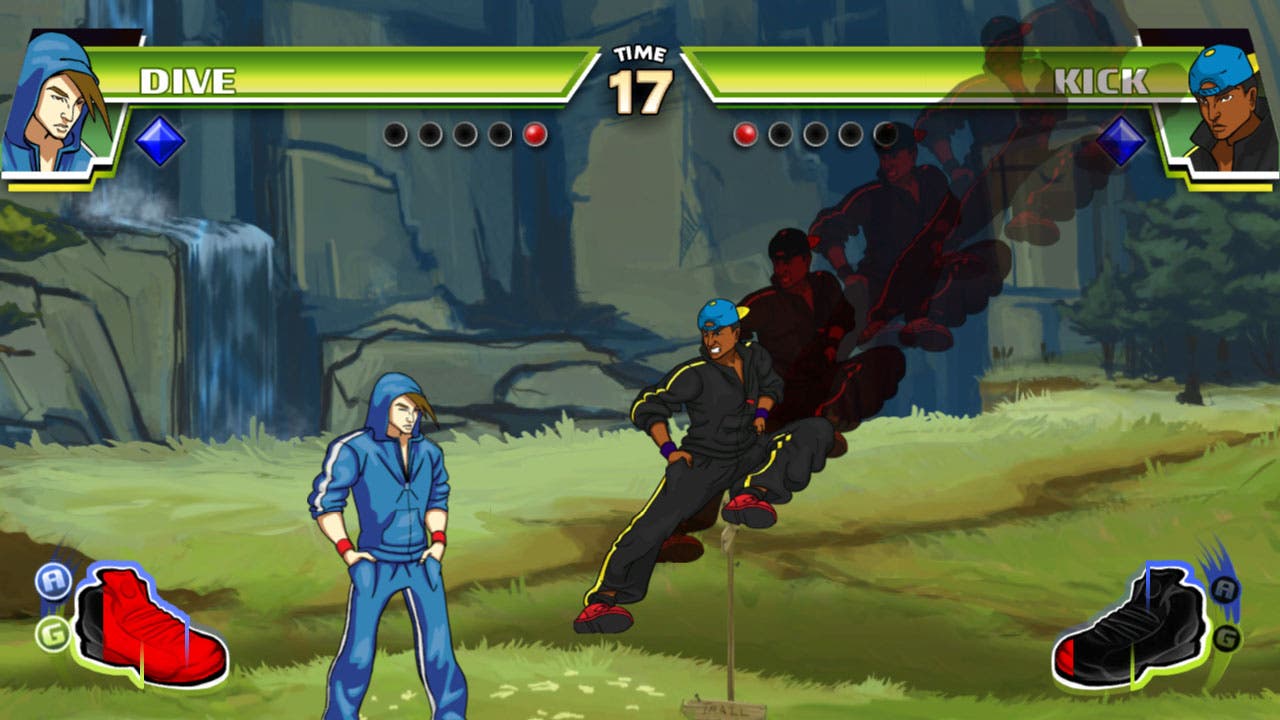 Making a new entry into the fighting game genre must be a daunting task. Unless you’re DIvekick, which immediately won the hearts and minds of attendees when it debuted at PAX East 2013. Should you kick the door down and give Iron Galaxy your money, or dive out of the way? The title of the game gives away all that you need know to be a combatant, dive and kick. There’s no block button, movement, or complex combos to remember. It’s simplicity at its finest. Pressing Dive while standing does a small backward motion. Pressing Kick vaults you into the air. Combine them and you’ll do a divekick.

Controls are a bit cumbersome. For as much as it prides on simplicity, it tries to assume you’re using a two-button controller and make every action unnecessarily complex. I applaud Iron Galaxy for coming up with a system of selecting, moving left and right, and going back in menus – it just is a hassle. Over a short time, you do get used to it. But it would be easier if it recognized your inputs and allowed you do navigate a menu with an analog stick, d-pad, or 8-way stick. The vast array of characters spans 13 different varieties of personalities. There are many similarities and inspirations that the roster pulls from, such as Mortal Kombat and Street Fighter being the most recognizable.

There’s of course Dive and Kick, the titular fighters. Mr. N, who wears a neck pillow (that protects against a headshot one time), Redacted – who we can’t talk about, Dr. Shoals who has two kicks as opposed to one, and Uncle Sensei who wears boots on his feet and has four feet for kicking, Each character has a story arc that can be completed, told through comic style cutscenes. They’re short, and yet entertaining enough to get some offline play in.

Fighting arenas take inspiration from pop culture such as a basketball court from The Fresh Prince of Bel-Air with accompanying beats of the theme to dark Outworld-esque area from Mortal Kombat. There’s even a wrestling ring to see, full of signs and visible commentators. Fights are 5 rounds to win. And every strike is a one-hit kill. This creates an instant sense of fear and brings the tensions to an all-time high, making you feel like you’re playing in a top tier tournament. There’s a sense of strategy of when to execute certain moves, or even deploy your special. Everything is on the line at all times.

Before going into a fight, you can equip one of four gems that boost your fighter. They range from +10 Kick, +10 Dive, or +10 Meter. There’s the ballsy, and risky YOLO gem to equip, which puts you immediately 4 – 0. This is living on the edge.

Multiplayer exists in offline play in Versus mode, or Unranked and Ranked play online. All characters, costumes, and gems are available. Divekick uses GGPO to reduce lag to an absolute minimum. Playing against people was indistinguishable from the last, there’s a level playing field in terms of lag. There are options to further customize it, but novices should just leave it at default. Divekick provides a lot of entertainment for a little price with memorable, new characters. This is a slick new fighting game that loads instantly and fights are fast and tactical affairs. The menu navigation does take a bit to get used to, but there’s little to dislike beyond that.