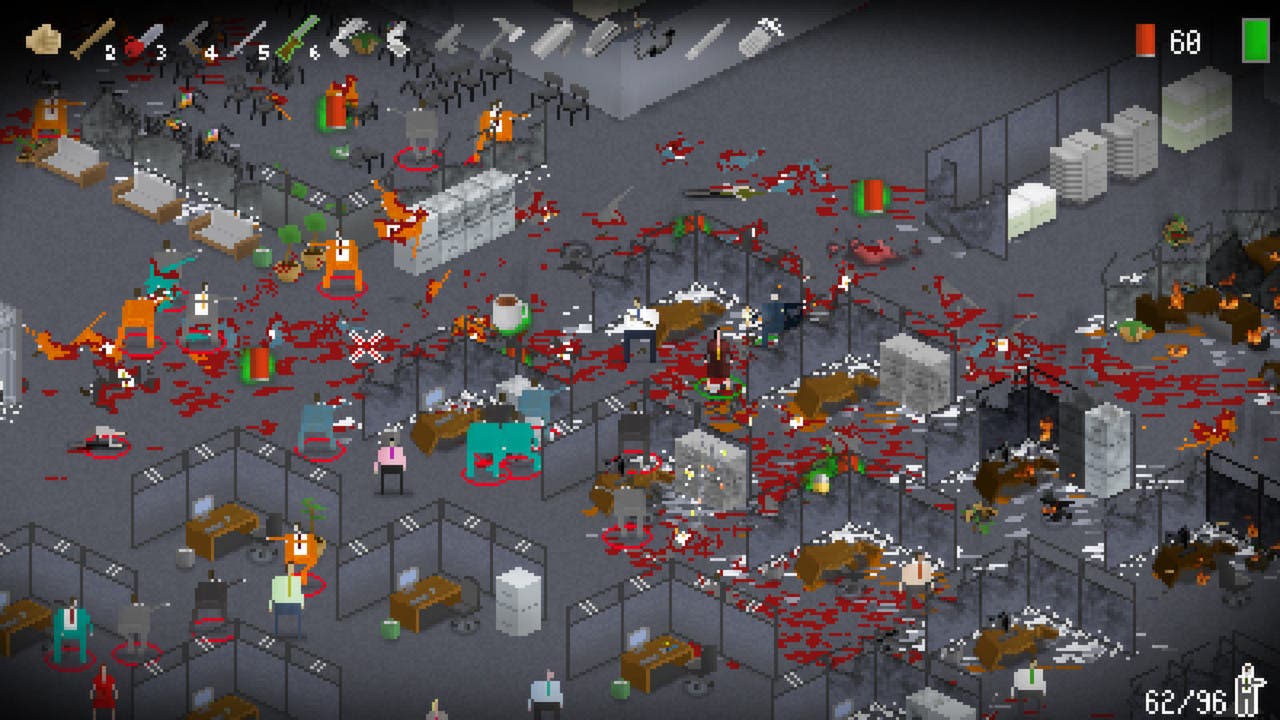 Corporate Lifestyle Simulator is less a simulator and more a violent fantasy extension of “Office Space” by way of Hotline Miami, but instead located in Canada – you know, where all the big zombie outbreaks happen. 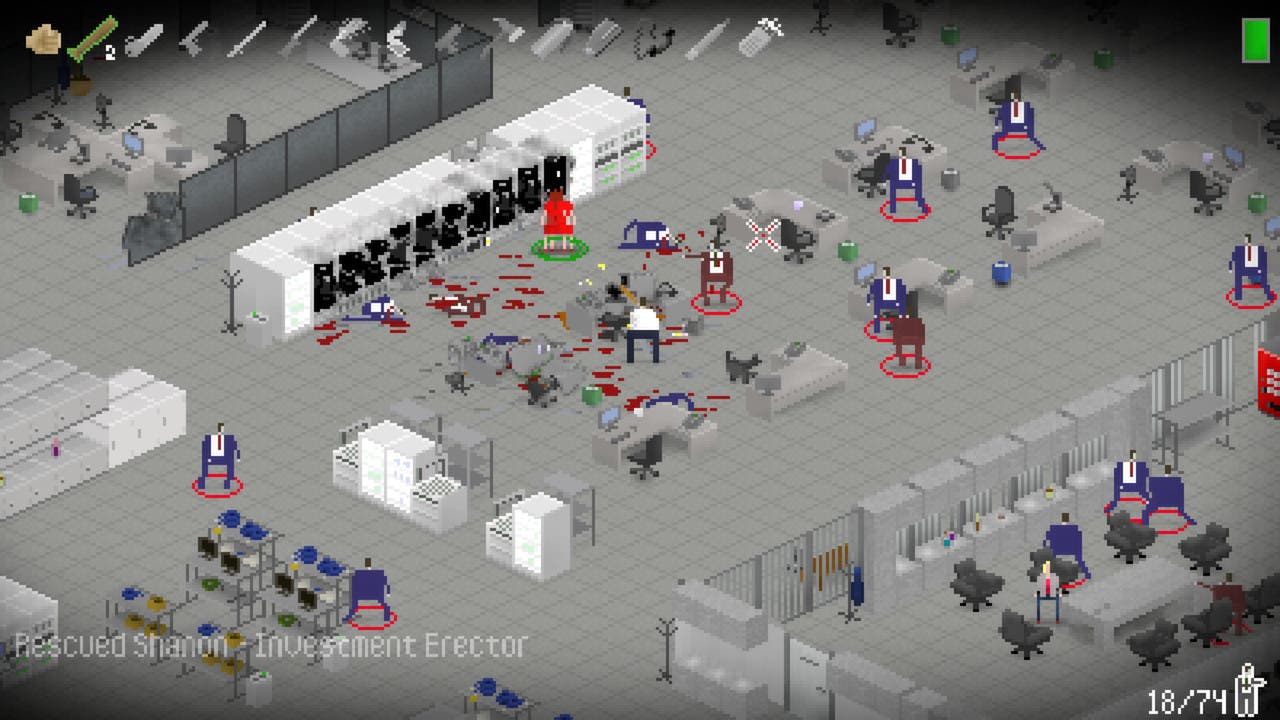 The title of the game sets an impression of something you’d normally find released on Steam, but the screenshots tell a different story. This is no simulator, it’s fast arcade action with utter brutality and a vulgar display of violence. You play as the generically named Dude, who discovers humorously that executives at his corporation behave like zombies, spewing buzzwords mono-tonally.

Dude can be controlled with WASD, with the mouse controlling his direction of aim. Which this free-aim works most of the time. Randomly it is imprecise when swinging a melee weapon or shooting a gun, as it will whiff past an enemy. Making contact with your baseball bat to the noggin of one of these Canadian executives is an absolute blast.

You’ll work through 27 levels, most of which unfortunately repeat with different layouts. There’s a finite number of co-workers to save, zombies to kill, and items to destroy in each level. Corporate Lifestyle Simulator lacks any integrated leaderboards using Steamworks, nor are there achievements to unlock. It just simply isn’t compelling for anyone to want to complete any or all of these objectives on merits alone. Early on, it’s entirely possible to just run around and find the exit. As you progress into the later half of the game, this becomes next to impossible due to the strength of the zombies, and your character’s fragility. Each level serves as a way of progressively unlocking new weapons as you’ll interact with special characters that will aid you on a mission, and like any trope involving zombies, die leaving you with a new weapon to use. Boss battles break up the monotony by giving you someone with massive amounts of health to kill, but most can be defeated by circle strafing to avoid most attacks.

As you progress, Endless Mode is unlocked to go back to a level and try to survive as long as possible. But again, there’s no incentives in doing so, other than to work out any personal issues after a long day at work. It’s mindless fun at it’s core, but doesn’t provide a positive feedback loop that’s worth returning to very often.

Played from a three-fourths isometric view similar to Postal or Diablo, gives this pixelated art style some familiarity while feeling different at the same time. Despite being having a corporate setting, most locations feature muted colors and the aforementioned repeated locations.

The soundtrack is easily the most enjoyable aspect next to the combat. The chiptune score is upbeat and fun to hear over and over. A few tracks sound “tinny”, and sound overall low in quality that becomes an ear-sore to listen to. Voiceovers help the cutscenes along, and can be generally funny in unexpected ways. Movie quotes fill in the audio clips that randomly play during combat, but repeat often and even overlap. This becoming quite a nuisance not before long. 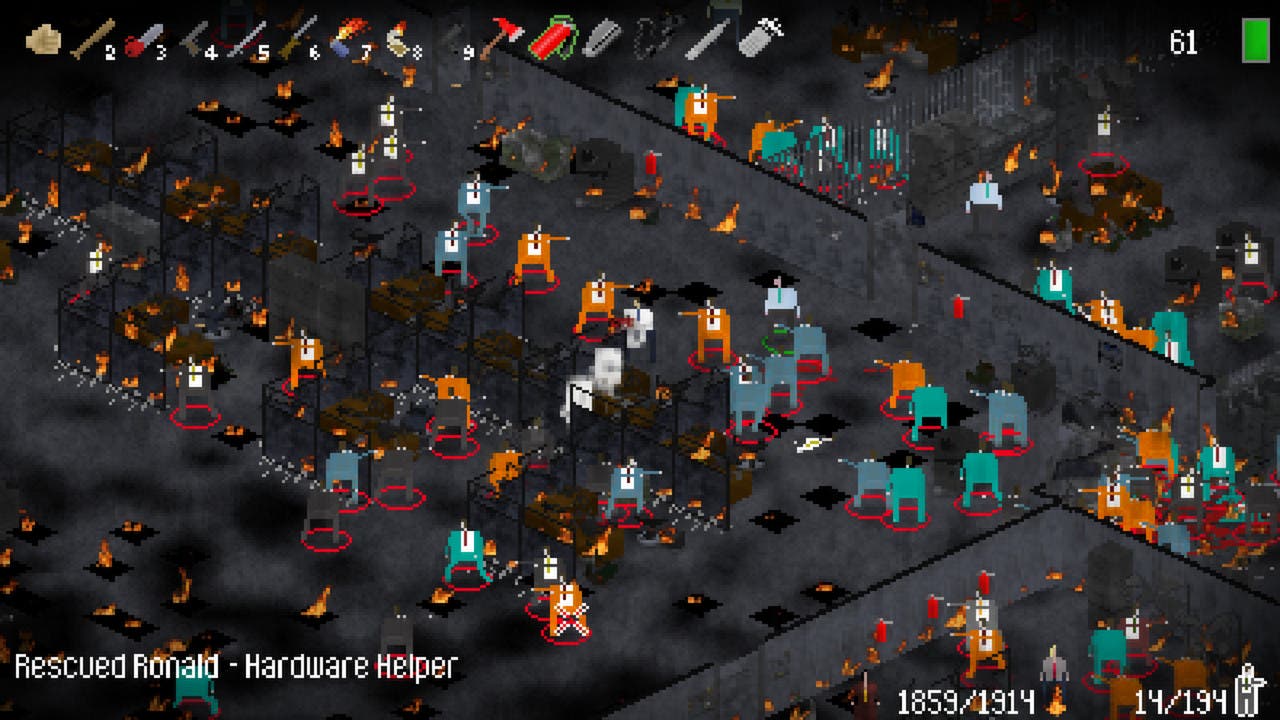 You may realize that this game was previously known as Zombies on Steam Greenlight when it was campaigned and eventually greenlit. I spoke with the developer, Bignic and he explains why this is:

“Yes the name “Zombies.” was completely unsearchable.  When it got Greenlit we wanted to do something special with it and really polish it off.  So we decided to expand on it, add some more content and features, and release it as “Corporate Lifestyle Simulator.”   It was problematic for giving away Steam Keys, but in the end just decided to give people the free upgrade – the expansion is a much better product and I’m much happier with it than the original.” 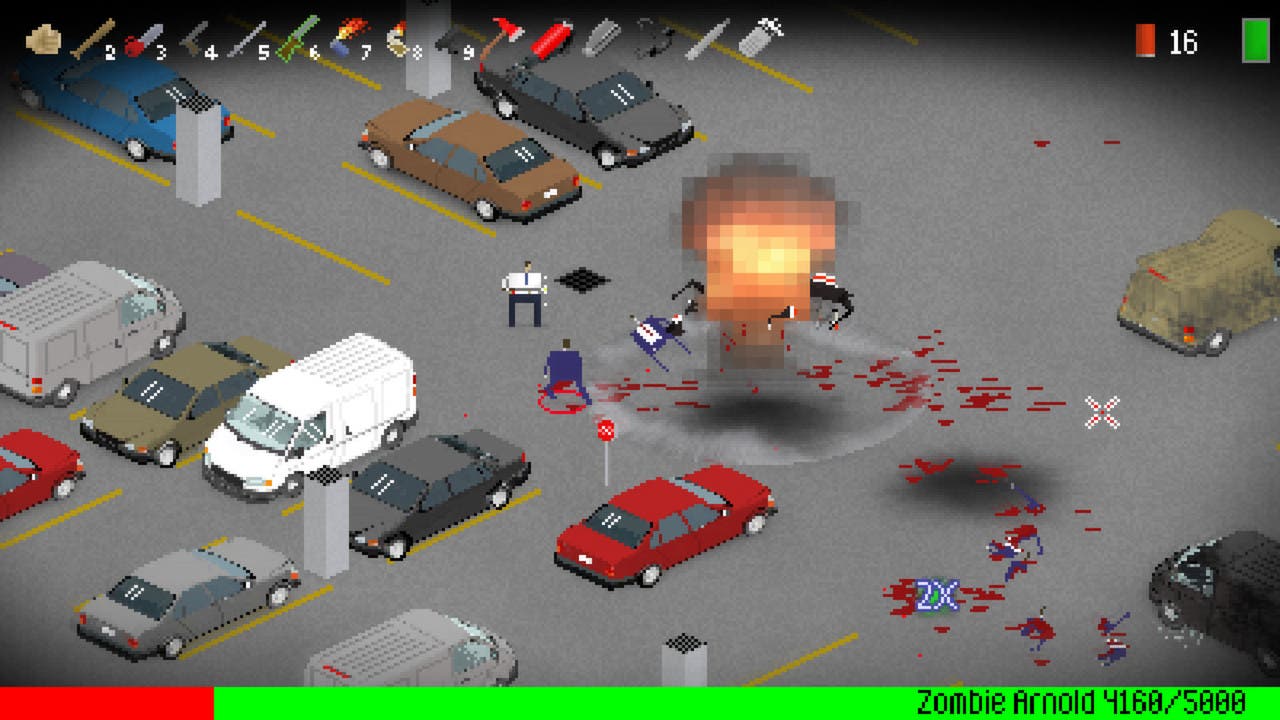 There’s so much potential within Corporate Lifestyle Simulator, it’s just bursting to come out, but never does. It is a great mockery of the corporate life, both in title and gameplay. It gradually gives you plenty of tools to dispatch large crowds of zombies with ease. At $5, it’s immensely satisfying for its 90 minute run-time.