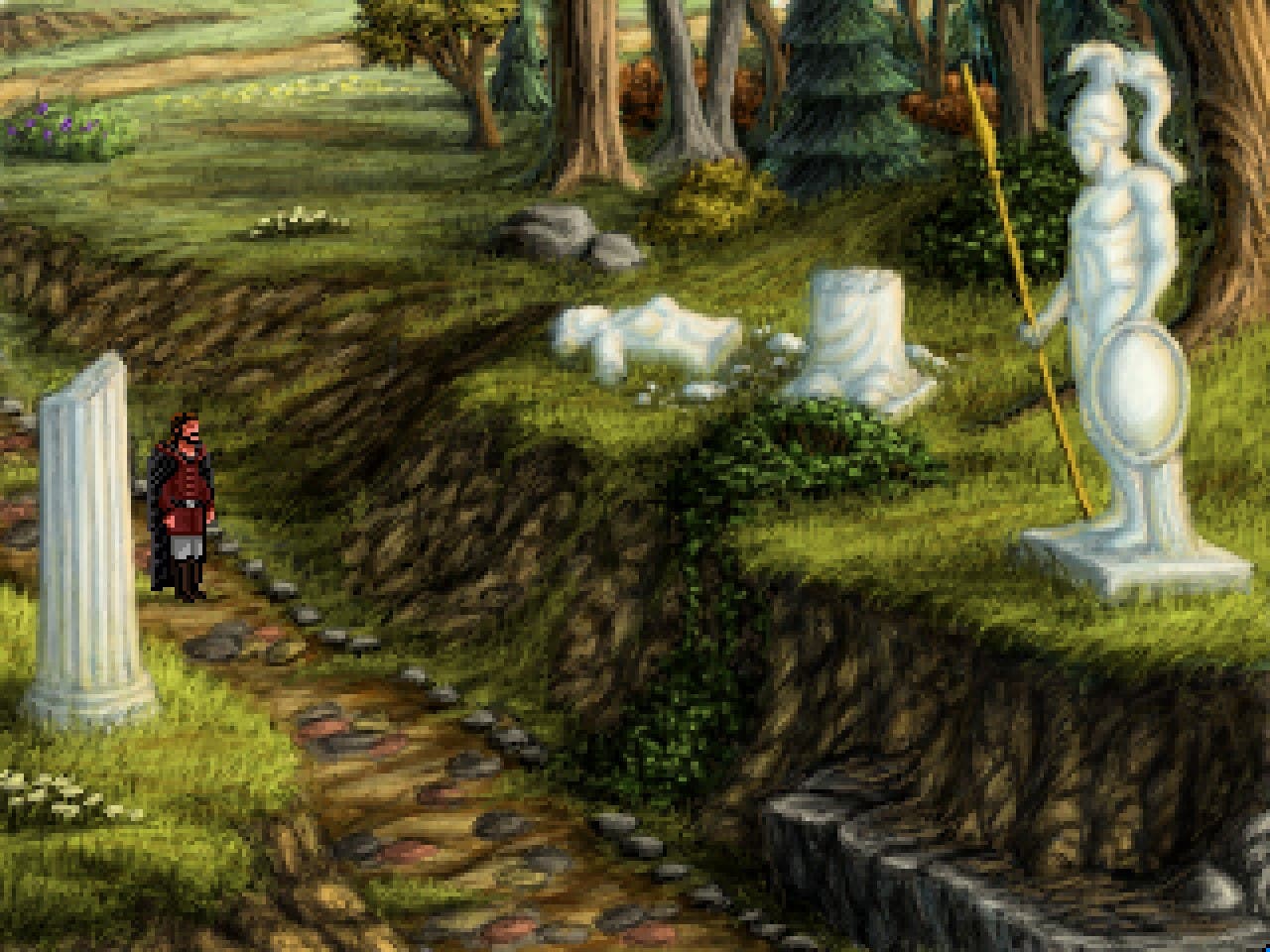 Infamous Quests’ first game, recreates the early 90s Adventure RPG in the way of a Quest for Glory, almost too well. In that, the more unpleasant nature of PC gaming of the era, and trial by fire gameplay is ever-present. In contrast, the game is so fresh and new, often feeling it like it was retrieved from a vault that was locked away for the past twenty-something odd years. 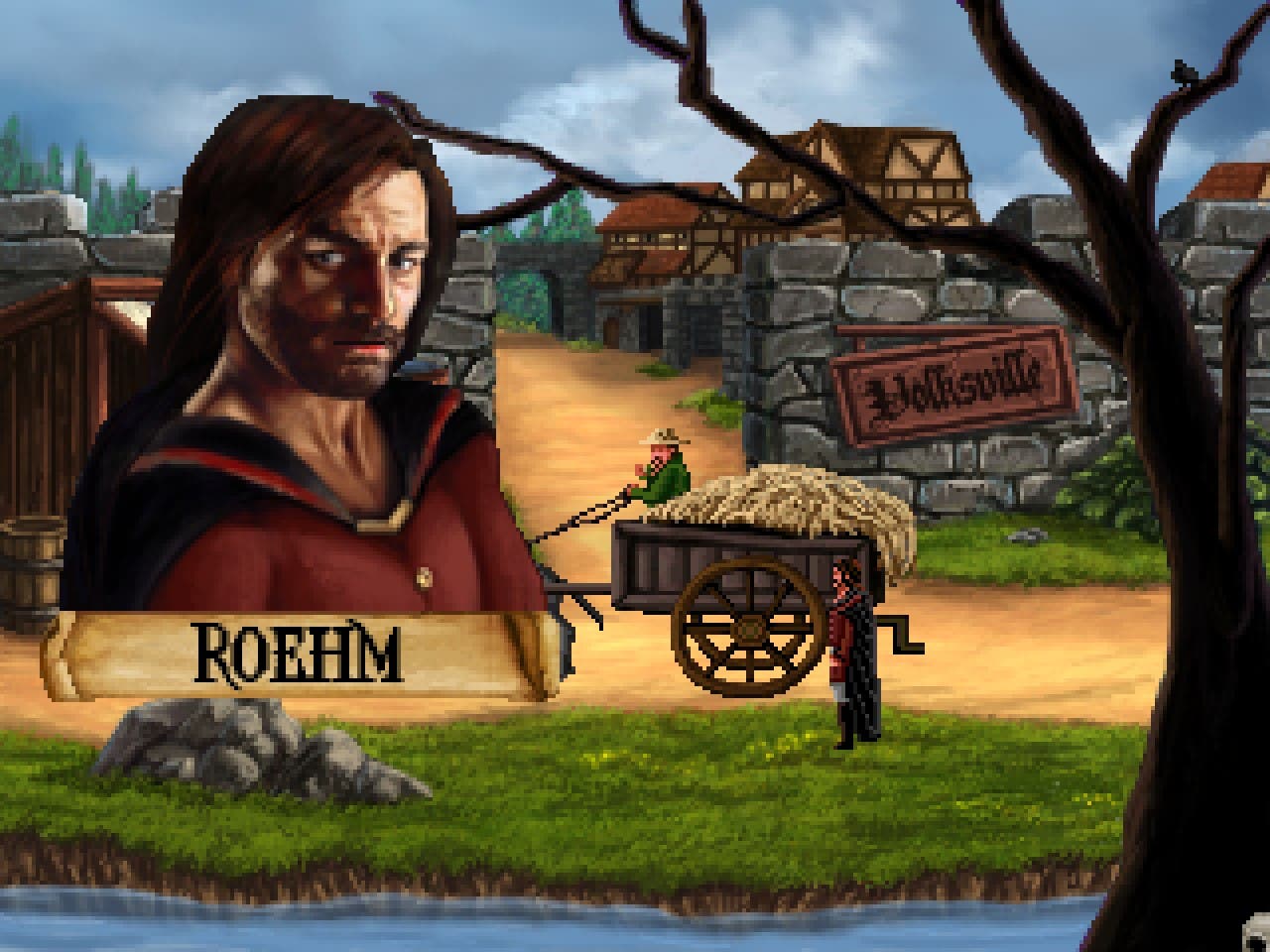 You play as the oddly likable William Roehm (Will Roam), who stops in Volksville after a broken bridge prevents safe passage. To pass the time, Roehm takes on odd jobs and is able to become one of three character classes: brigand, rogue, or a sorcerer. You’d normally be presented with a choice, but it’s entirely possible to miss one or two of the other classes if you don’t take the time to talk to everyone and click on everything.

And that’s the other thing, you have to know what you’re getting into. This is not a hand-holding experience, by any means. It doesn’t intentionally do anything put you off once the initial cutscene ends, but it is not clear at all what you should do or how to do it. Idling too much will initiate a cutscene to progress things, but only at given times. If it weren’t for a quick start guide I used, it would have taken me much longer to get going.

Roaming around the town, there’s lots to do, but I’m afraid you’ll often be lost and wandering too often to enjoy it. With no built-in help system or a 1-800 hotline to call, leaves you to your own devices or an online walkthrough. So you’re required to do some old-fashioned note-taking, because it’s not otherwise apparent that some pieces of information can never be retrieved. There’s no notes or journal to revisit dialogue or an abridged bullet points of what has transpired, so the onus falls on you to retain information. 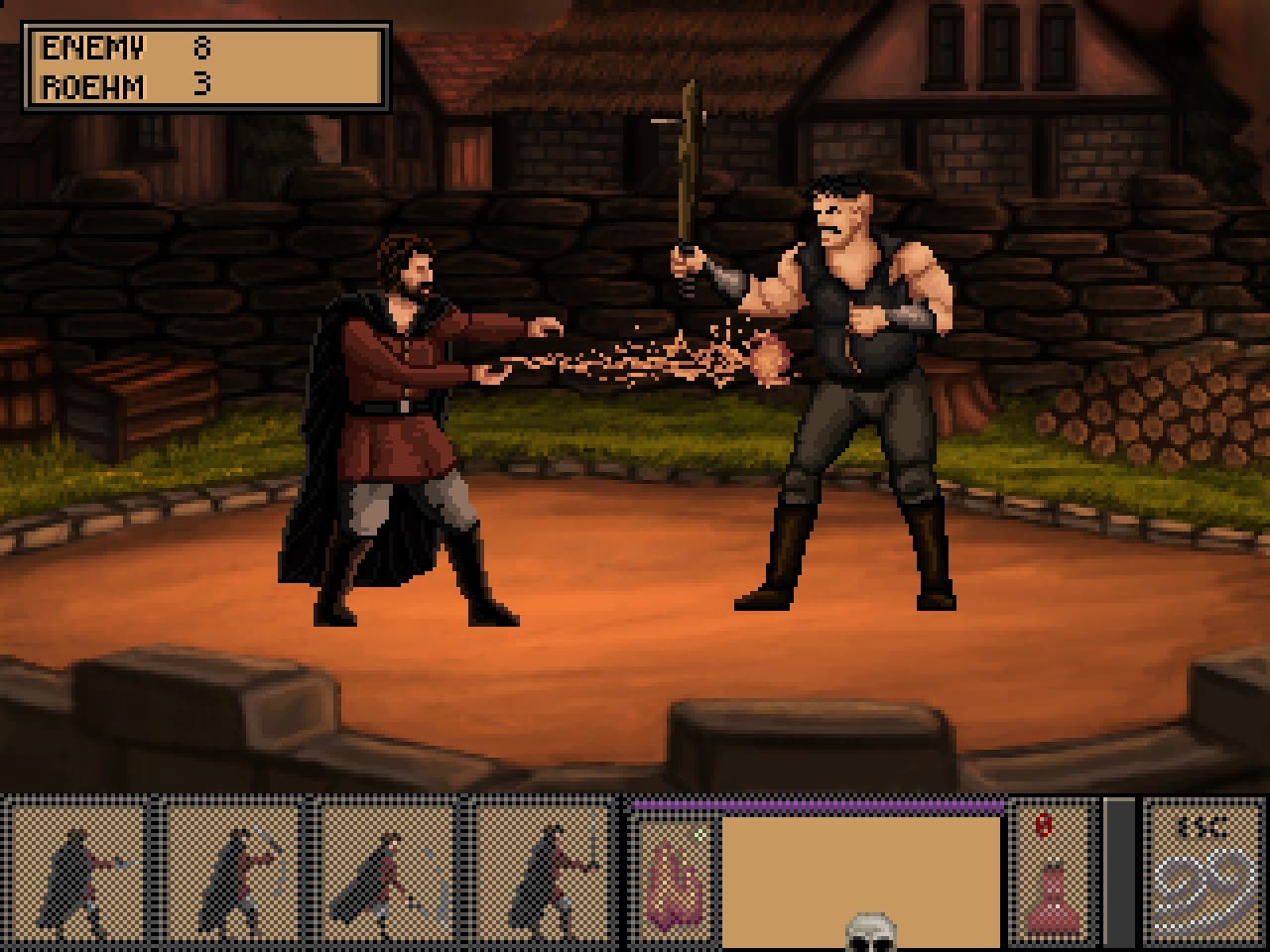 In traditional point-and-click fashion, you’ll click many things many times to determine what is interactive or not. Experimenting and ingenuity are rewarded. You can use a scroll-wheel or right click to cycle through modes of interaction: touch, look, walk to, attack, etc. Why it can’t just automatically choose the best or correction option is an unnecessary step to take, even if it was something that Quest for Glory did. It’s hunt to replicate the experience that game had often hurts the experience for Quest for Infamy.

Combat happens, regardless of class. It’s often long and difficult, even on ‘easy’. You’ll have three attack options, and a block. Again, replicating the experience it draws so much information from, comes off dull and you seemingly win with a stroke of luck with each random encounter.

In time, you’ll earn Infamy Points for tasks, but it feels mostly arbitrary. It even forces the infamy thing down your throat, even though you’re not doing anything really remotely infamous. At worst, you’re the school bully with masking your insecurities. Roehm is a mostly enjoyable character, but you aren’t given the tools to really be the villain you could be. It comes so far, but doesn’t go all the way. 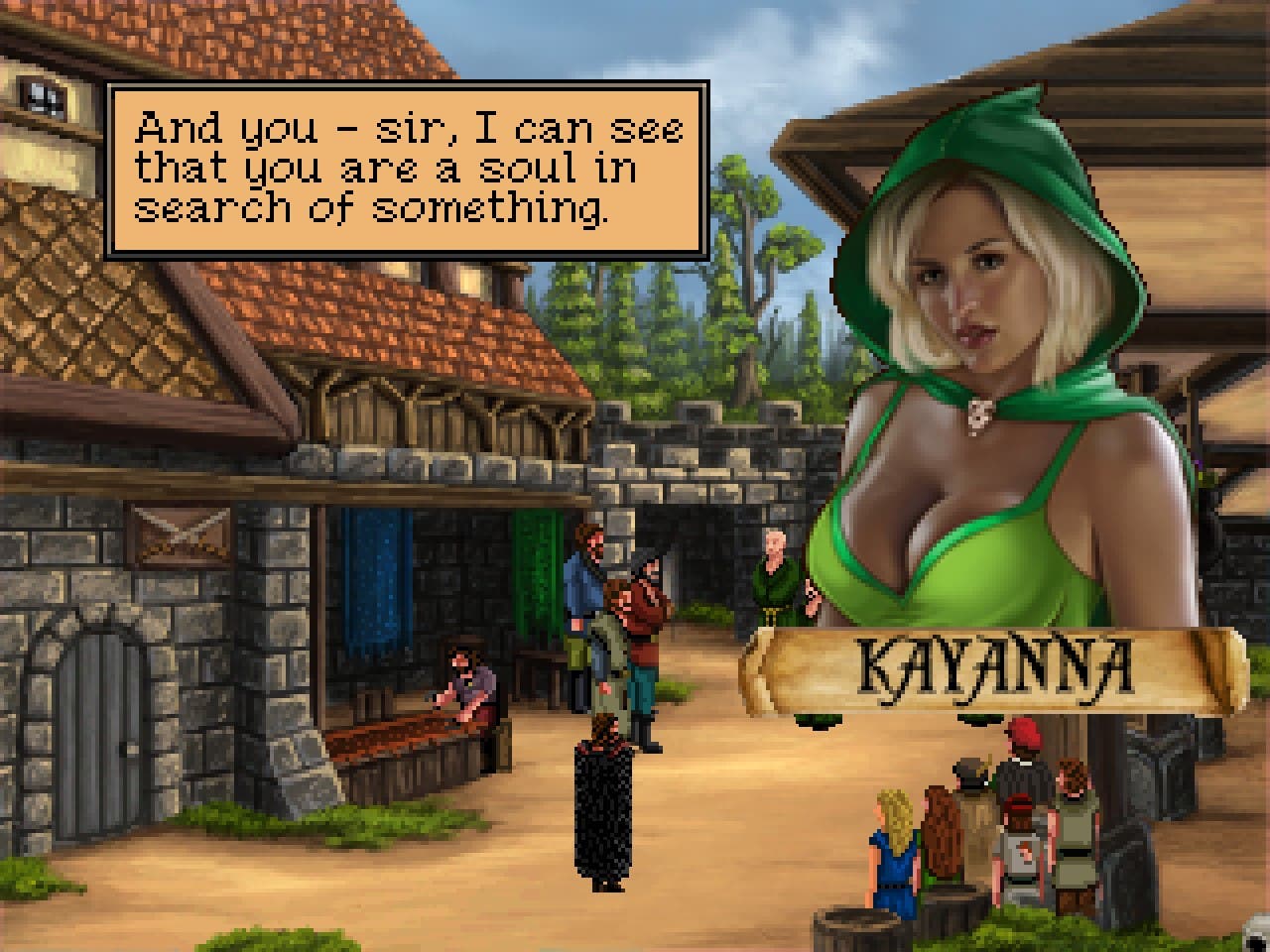 If it isn’t obvious by the above screenshot, there’s some blatant sexism here. And it’s not really the fault of the developers, as this is par for the course for the time in which games like these came out. Though, I do wish they had exercised some restraint here. However, there’s some pretty crude humor in relation to women. For instance, if you have the sword icon enabled and you click on a woman, a popup says “This is the wrong sword to use on her”, clearly inferring something phallic in nature. Just awful.

You have the option of choosing just text, text & voice, or voice only for conversations. The voicework itself is pretty bad. It’s the actor’s delivery that hurts these recordings, as opposed to being limited by the hardware. The game’s narrator is funny, often providing levity in tough situations, and the best recordings of them all.

As retro-inspired or how much the quest for nostalgia goes, modern game design ideas creep up, like achievements and fast travel. Both of which don’t seem out of place in the slightest, and the fast travel especially is welcome. 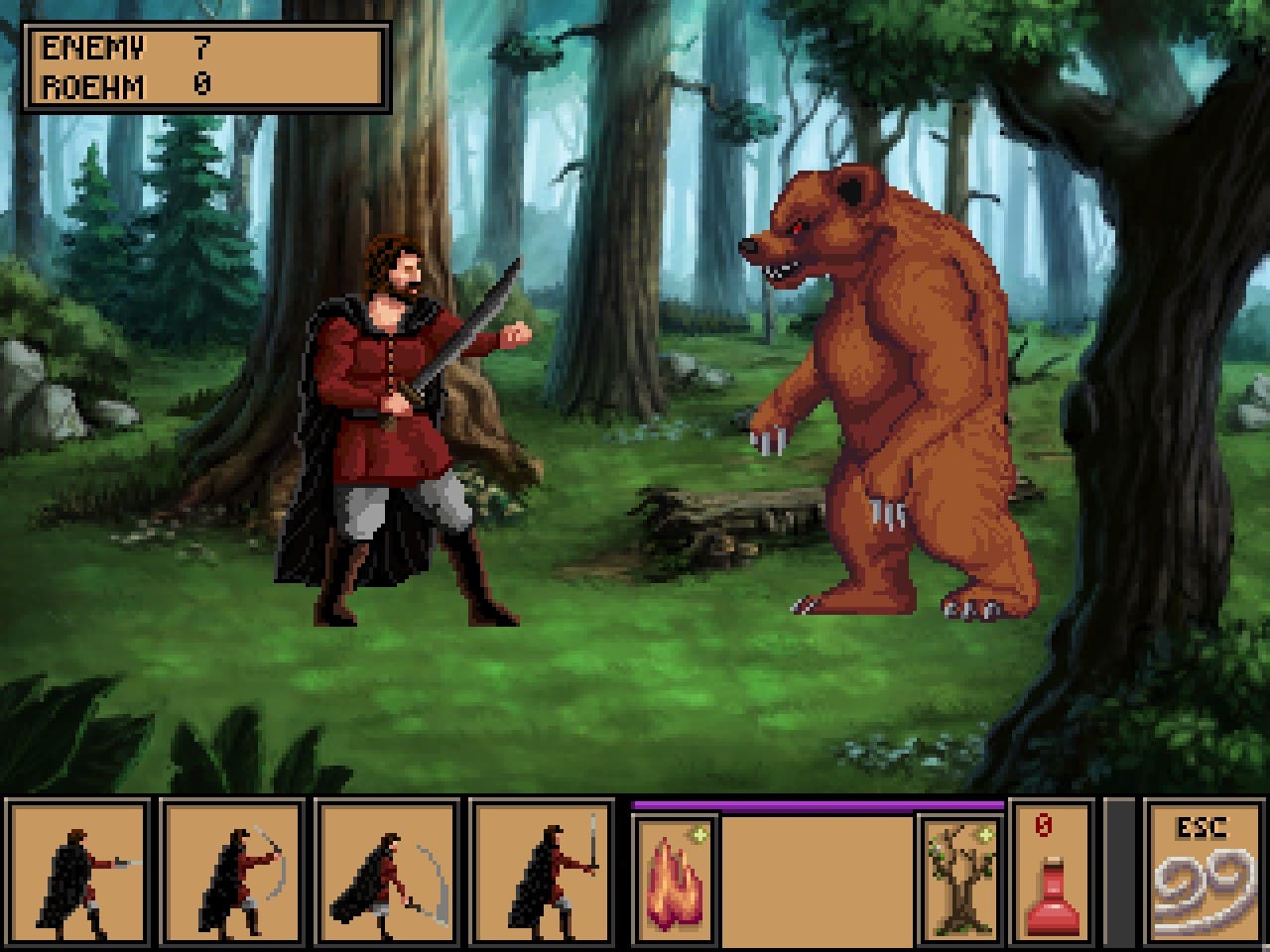 Infamous Quests was able to expertly craft an Adventure RPG game from a time that has since passed. Quest for Infamy has some problems though, and for that it gets held back pretty severely. There’s lots to do and see, among the 200 hand-drawn slides. And the openness, humor, and replayability make Quest for Infamy worth playing more than once, if you can stomach the obtuseness. Quest for Infamy is clearly aimed for those who have nostalgia for the Quest for Glory series, perhaps intended for an older, yet immature audience.