The game starts off with a bang, quite literally. As an explosion has killed many, and you are thought to be the one behind it. Left with no memory, you are trying to prove your innocence. It is quickly learned that you can close the rifts that have opened (indicated by the brightly glowing green mark). And while you start off as a prisoner, you are quickly absolved of these crimes as you work towards the good of the kingdoms that have been affected by these rifts.

As you’d expect from BioWare, Dragon Age: Inquisition is about building your “you”. This can be done among the four races across three classes, each of which provide a unique look and playstyle among any combination. Hours can be lost on creating your character, down to incredible detail.

Inquisition is very much “your story”, influenced by the decisions you make, and how much time you spend talking with your party to learn more about them. This is what makes it good, and quite adult. With the well-known branching dialogue, decisions made here will please some in your party, but not all. And balancing this is tough, especially if you are trying to play morally true, but also want to romance someone who is of the contrary.

Dialogue still hangs if you don’t select any of the options, ruining the flow and importance of conversations. Alpha Protocol excelled at this by having a timer on choices. When things get critical, it is imperative here that decisions are made thoughtfully, but quickly as to not avoid these awkward pauses. And thankfully the spoken words of all you encounter doesn’t seem too grand for their own good. It feels grounded enough to make sense and is believable that these people and places exist that they are talking about. 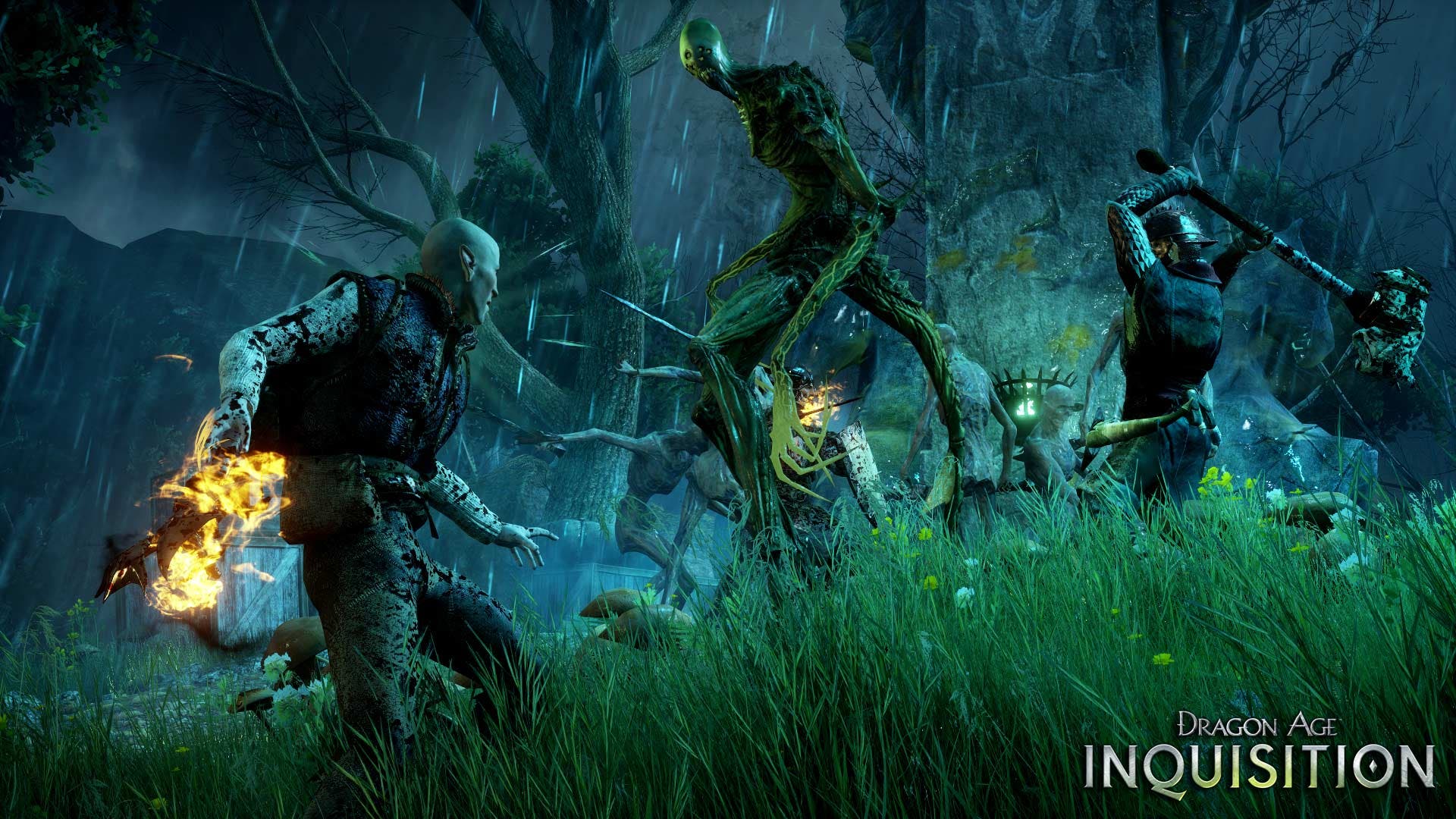 Later in the game, you get put on a throne (a far cry from beginning the game as a prisoner). Now you’re deciding who to execute, exile, and who to get a second chance at life. Everything gets pretty heavy-handed as the game progresses, but it feels you are making meaningful, and very impactful changes to the world around you. Over the course of your time in the game, you’ll encounter returning characters from both Dragon Age: Origins and Dragon Age II. This brings the all of the games together, to show how much has changed, how much hasn’t changed, and just how expansive it all is.

Unlike other RPGs, Inquisition‘s big, BIG world allows you to know your party members, even better than some of BioWare’s previous games for the series, and even with Mass Effect as well. Talking to your party members is crucial, this is how you become invested in the lives around you. And you will. With spending of upwards of 50 hours to just see the story’s end, you’ll care about who is with you. Iron Bull, the one-eyed Quanari was my favorite and often used companion, voiced by Freddie Prinze Jr. His brute strength was not also physical, it was emotional as to keep everyone grounded. His no nonsense attitude also provided some humor. Facial animations help secure the voice acting, and are borderline uncanny in spots. 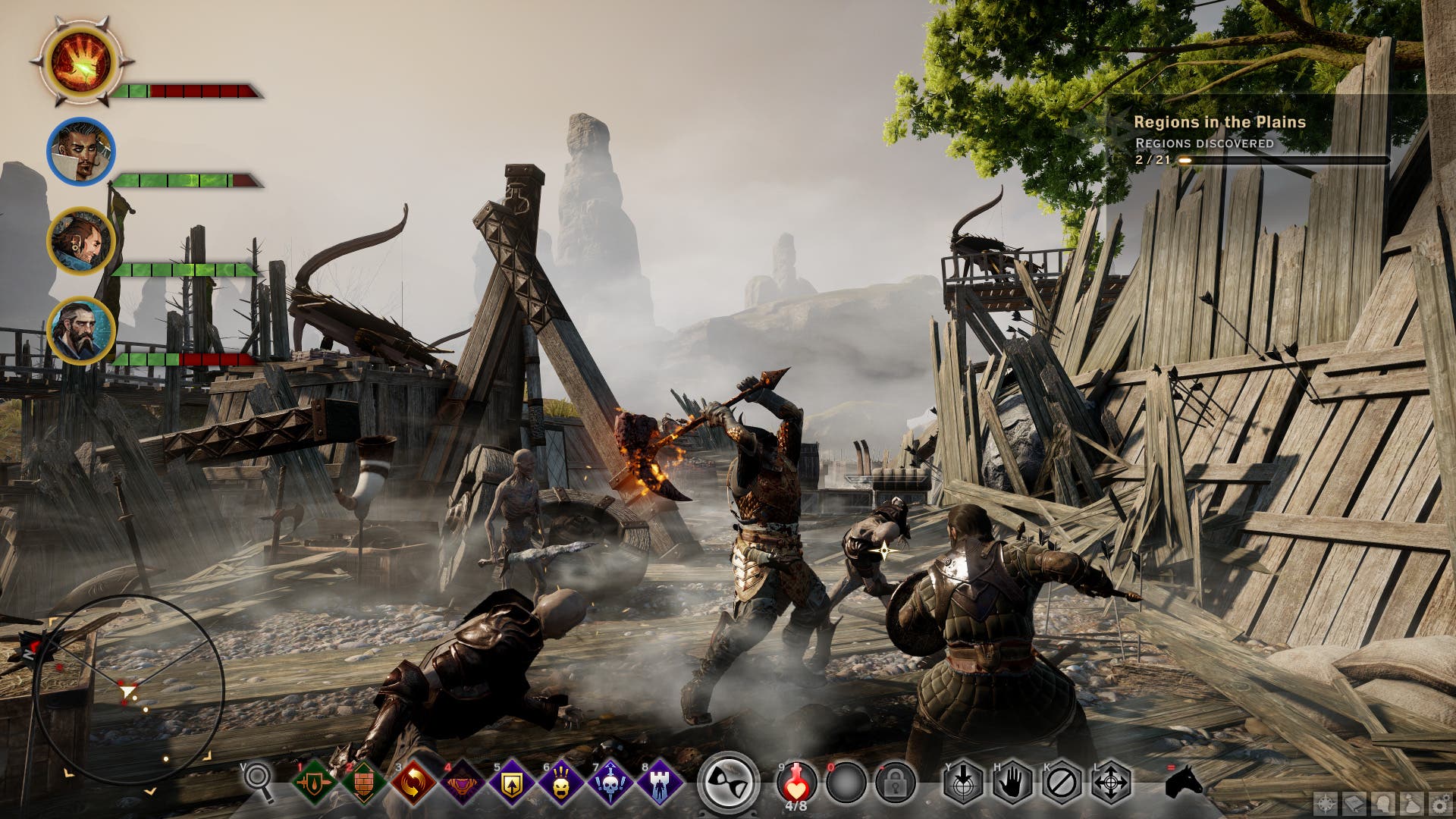 Regions are specific, sectioned off areas, but manage to still be places you’ll spend hours exploring. And some of the regions are in areas you’ve seen before in prior games – but everything feels connected now.

When in the War Room, the map of Ferelden and Orlais, the two kingdoms are presented. You’ll have many options on where to go and what to do. And it’ll feel like you shouldn’t leave the Hinterlands, as there’s so much more to do and see. You have to move on, you have to explore to see the diverse and grand beauty that Inquisition has to offer. By sticking around, you also run the risk of overlevelling your characters for the rest of the game. 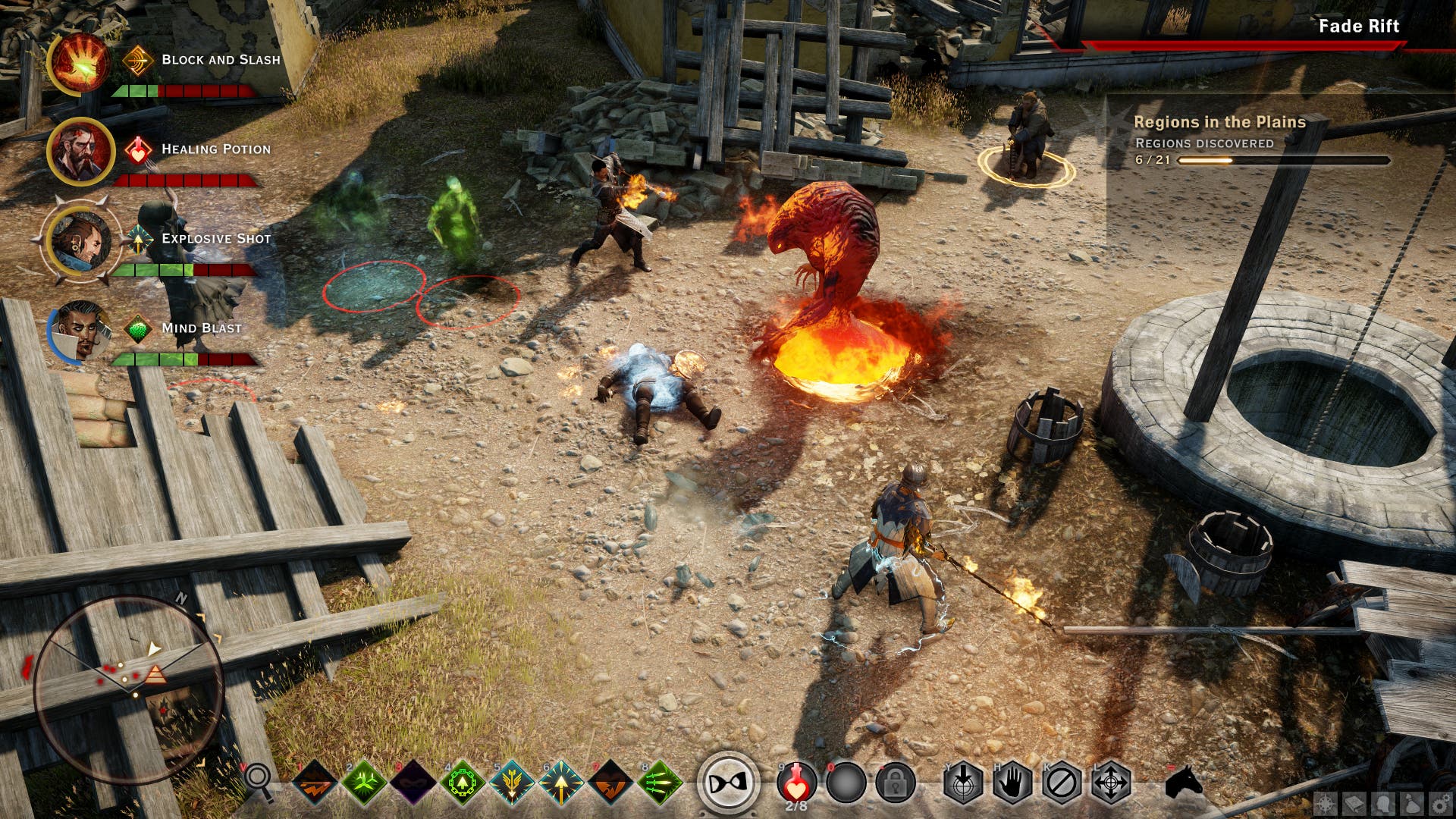 Combat is more akin to the original Dragon Age: Origins, as you can program tactics to each character, and let them run on autopilot, such as swallowing health potions when reaching a certain threshold. There’s also an overhead tactical view that plays like a strategy game to position each party member ever so carefully like on a tabletop board-game. If your created character dies, it’s not game over. This is party-based combat, so you can take control of any character and make use of the special abilities.

As previously mentioned, Rifts themselves must be closed by your hand (quite literally). It’s here you bring your brand of magic to the fight. The sooner you close the rift, the less that enemies will spew out of it. However, that also stops you from earning XP from the kills. So it comes down your choice of when you want to close it. I imagine on the harder difficulties, the sooner the better is advised.

You’ll be fighting wild animals and enemies who appear out of the rifts, learning the best strategies for dispatching them.  Feral animals roam the landscape, such as bears. The titular enemy, dragons rarely make an appearance. But when they do, are special. They have individual targeted limbs that can be attacked, where no other creature battle plays like this. 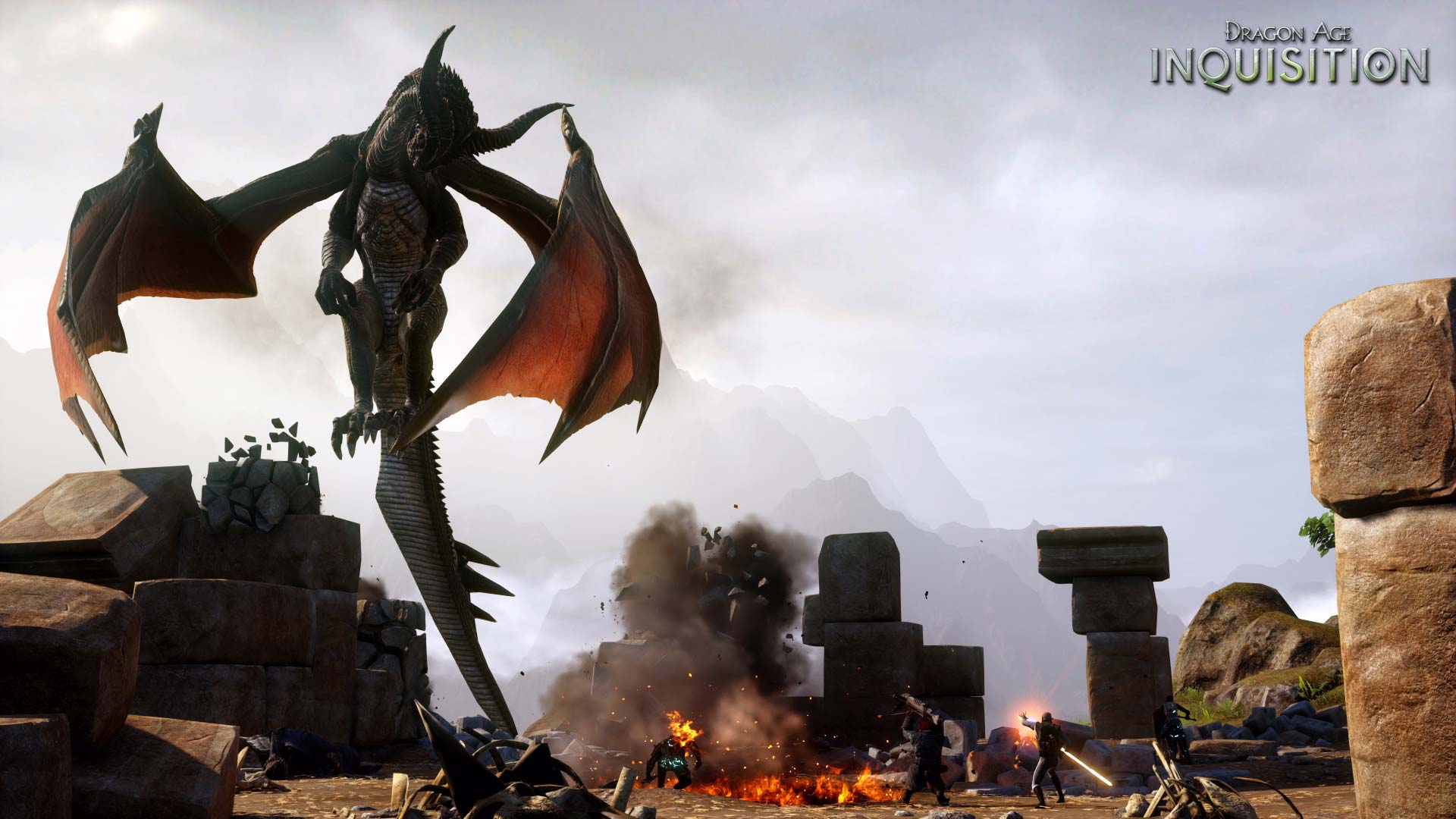 Each character’s skill tree is unique, and points can be spent with each level up. The trees are a bit trimmed compared to prior games, but it helps make decisions. After about 20 hours, a fourth skill tree unlocks that makes it all worth the wait. And if you mess up at any point, you can get a re-spec potion at a merchant to reset and start over. However, subsequent re-specs become more costly.

Side quests are bountiful, and almost overwhelming. Those who have OCD will have a hard time leaving anything unfinished. But the best part, is that they don’t feel like “filler”, or anything but meaningful side stories to partake in.

In the aforementioned War Room, you can send people on missions like in Assassin’s Creed Brotherhood, but this time everything plays out in real-time. And if your presence is required, you can take part and gather your party to go on-site.

While running around the world, you can press a button that will ping the surrounding area. It will reveal items to collect for crafting, quests, and more. You’ll probably end up spamming this button, searching every corner to find items to craft with.

Just like you’d find in an MMO, there are “Mounts”. It’s an appropriate name, as the animals you ride aren’t just horses. Your character can also jump, which looks silly and out-of-place. And Inquisition will often task you with jumping puzzles (that you would find in an MMO) to get to sidequest objectives.

Multiplayer separated from the story, and takes place in the same universe. But it doesn’t play like Mass Effect 3‘s. There’s twelve pre-built classes, most are gated off and are unlocked only through leveling. In this mode, you have separate inventory and abilities to that of the main story.

There’s an in-game store, items can be bought with in-game gold, or bought with platinum using real money. Nothing feels offensive or necessary in order to do well in co-op. Crafting is also here from items you find from looting, that can help benefit your characters.

I just couldn’t find many playing it. That isn’t to speak of the online’s quality, it is really good and nice distraction and something else to do with Dragon Age: Inquisition. It’s definitely a value-add to the game. However, with the story being so personal, it’s hard to venture out and do a slimmed down story, even with your friends, let alone strangers. 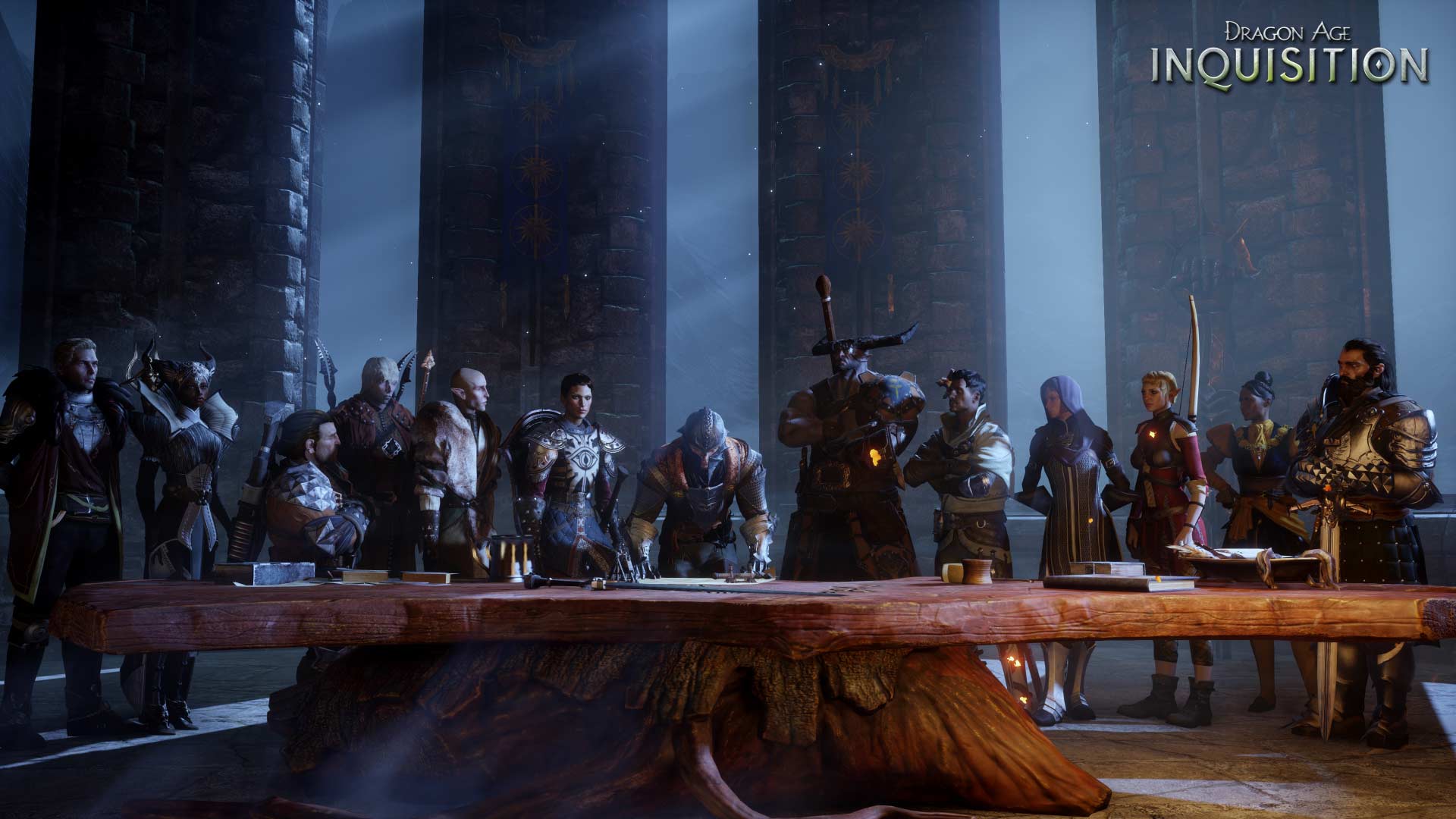 Dragon Age: Inquisition is as beautiful as it is massive – which is to say, “very”. I haven’t yet explored everything there is to offer, but of what I’ve played is staggering all its own. Characters are interesting, that you will no doubt become attached to. Inquisition is big in every sense of the word: scope, scale, landmasses, customization, dialogue, and so so much more. Dragon Age: Inquisition is the game that ties the universe that was created with Dragon Age: Origins together, and is an excellent party-based RPG that deserves every hour it takes to play.

An Origin code was provided by CheapShark for review purposes