“Equipped with his five senses, man explores the universe around him and calls the adventure Science.” These words by Edwin Powell Hubble can directly be applied to the sensory overload that is Elite: Dangerous. With a visual splendor that so many of us have dreamed what other worlds are like, and the sound your ship makes as you’re about to enter hyperspace is overwhelming. All of Elite: Dangerous‘ sight and sounds are wonderfully detailed, begging you to explore to see and hear more of it. 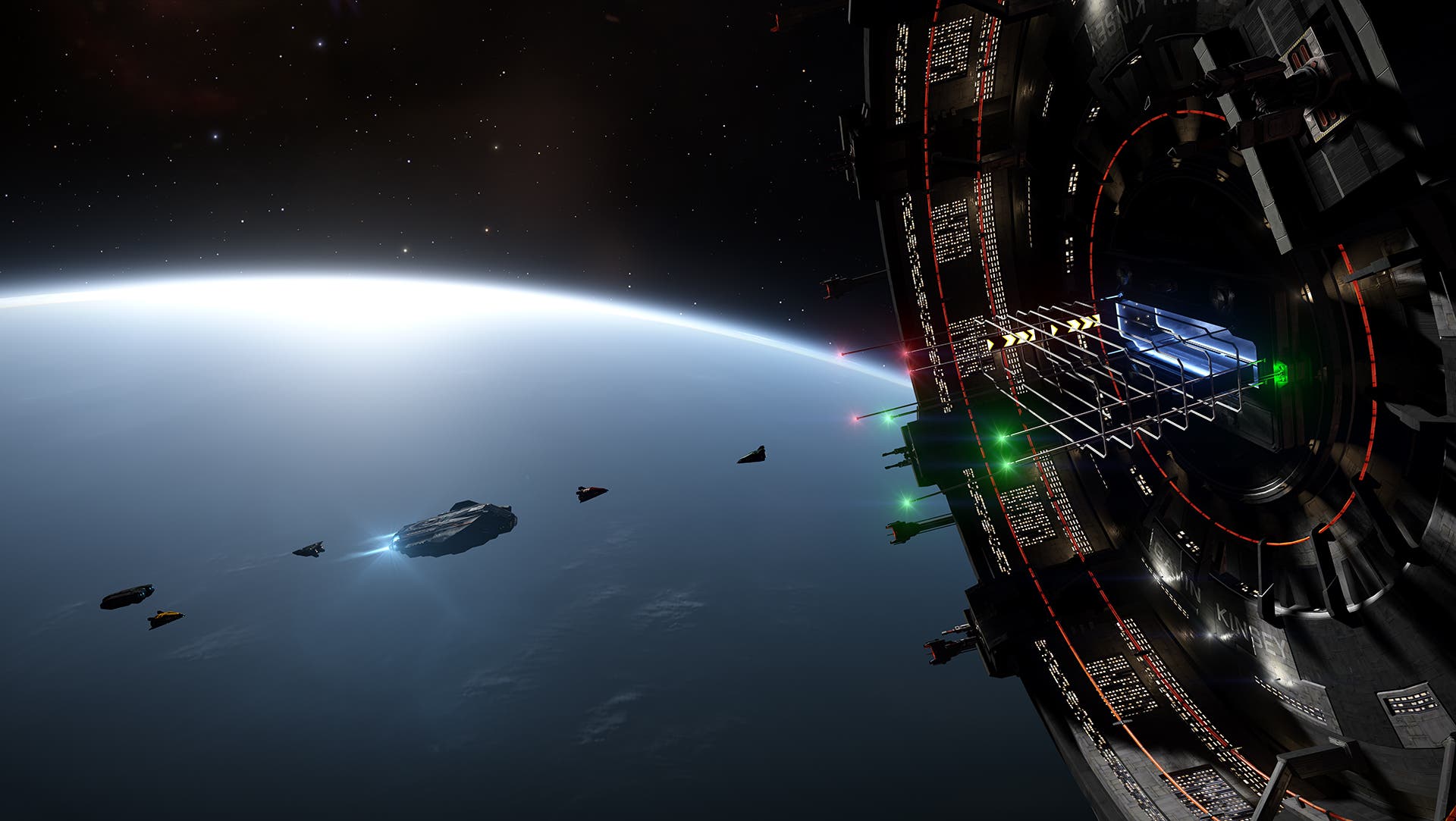 Starting off in Elite: Dangerous is as easy as picking a class you want to be in the game’s universe: pirate, trader, explorer, mercenary, and more. Your humble beginnings have you sifting through the bulletin board of the starting spaceport, and figuring out how best to make money while not getting killed for biting off more than you can chew.

And much like a racing game, you may start off with a crappy space vehicle, and almost no money. After several hours of the game, you’re able to afford something better than your Honda Civic of spaceships. You can finally be someone meaningful and have the ship and firepower to back it up. You can be whoever you want to be, because Elite imposes nothing upon you. You’ll probably land backwards for the first few dockings, wondering why you haven’t properly docked. It turns out you need to face the tower. But this can be confusing when you start in a dock, and exit by facing away from the dock. The instinct is thinking you need to face the same way. It is never a huge problem, but it just isn’t clear enough.

Unfortunately the cyclic nature of Elite: Dangerous feels grindy, or repetitive. It’s very much a “wash, rinse, repeat” regarding the objectives. No matter the type of commander you are, you’re doing the same type of things to earn credits. And whether that is something you can tolerate is up to you. Elite‘s freedom does allow you to deviate from your selected career path, perhaps reducing the mundane nature of what you do in the game. But whether you’re carrying cargo or escorting a ship through the galaxy, it still feels all too similar. The game does its best to get you from place to place as quickly as possible, but there are limitations. The three stages of flight have individual purposes that make sense, as well as make travel thrilling.

The first of which, is just regular cruising. It allows you to dock or just fly around aimlessly. Planetary objects are just paintings, beautiful to look at, but nothing you can get in close and touch. Yet.

Supercruise, is for interplanetary travel. This allows you to travel from planet to planet within a system at an accelerated pace. This is a neat system, as it shows your distance from your target. Aligning your speed with the distance within the blue bars allows you to safely disengage from supercruise. If you are going too fast, you an do an emergency exit, risking overheating.

Lastly, you have Hyperspace, which is exhilarating. It instantly puts a smile on my face. each and every time I engaged it.  The Frame Shift Drive (FSD) requires a charge, so it isn’t something you can quickly hop from system to system with. Silly things like not being able to engage your FSD because there’s a planet in the way, is a bummer. It is especially an issue when you’re trying to run away. Realistic? Sure. Fun? Not quite. 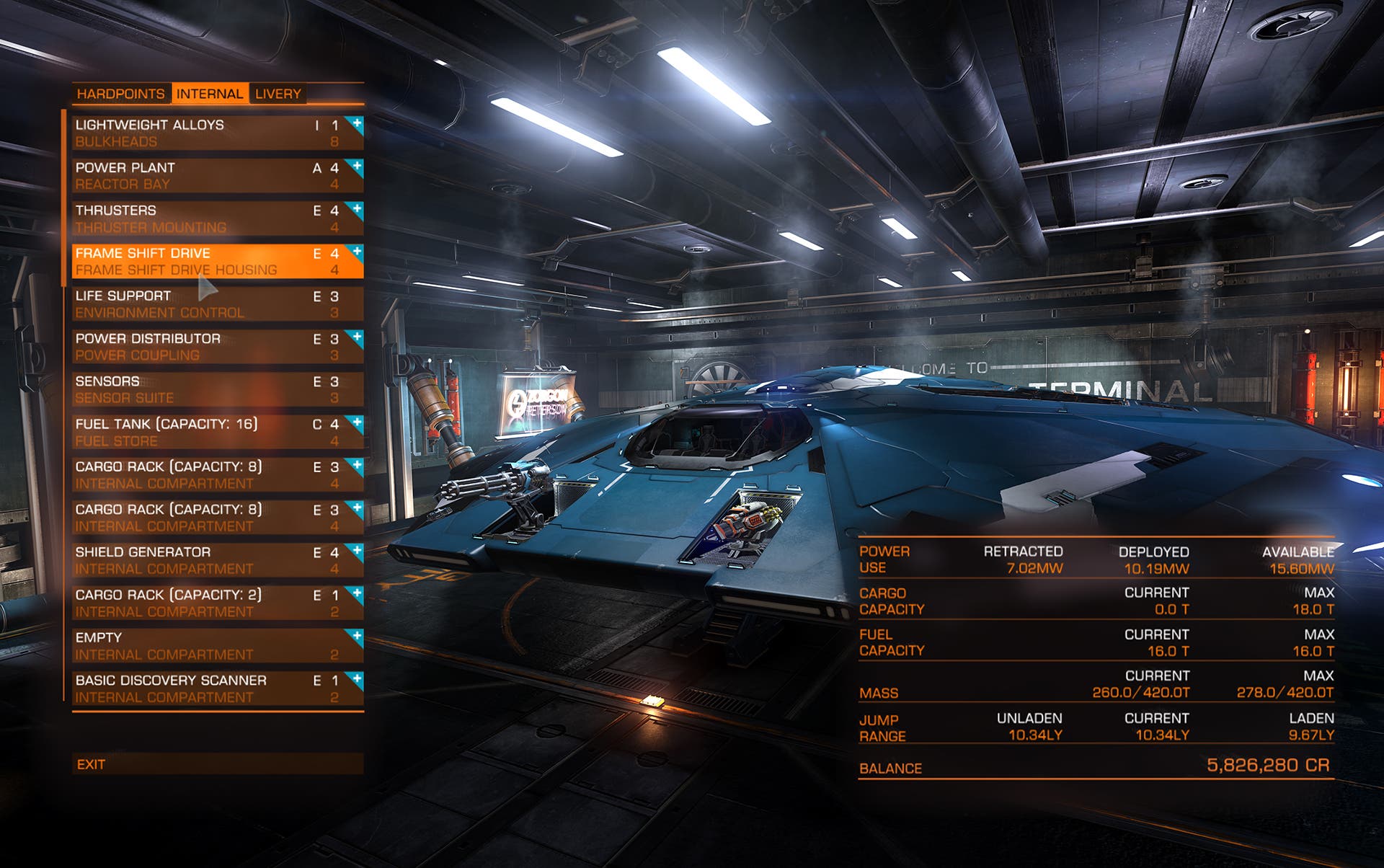 In, and out of combat, you can divert power to engines, systems (shields), and weapons. It’s pretty self-explanatory what the purpose of this is. But it has a very Star Trek vibe, to place power to different systems when you need them the most.

Weapon groups are essential. Over time, you’ll earn enough credits to purchase more weapons. And you wouldn’t want them all to fire off at the same time, as some weapons require cooldowns or only have a specific payload that you don’t want to expend, like rockets. This makes Elite end up feeling similarly to MechWarrior, as you can create weapon groups for different situations and needs, to help you strategically and tactically succeed in battle. The game must be played online. There is no offline component, due to having trading, discoveries, items, etc all needing player interaction. An offline mode would be completely separate and need a ton of maintenance that the team at Frontier cannot give. Though, you can play solo. You’re still connected online, but only with AI interactions. And honestly, solo feels the same as the “open play”. There’s just simply not enough places inhabited by other real players at any given time, the space in this game is too large. It’s a double-edged sword, as it’s nice to not run into people (literally), but it feels too sparse to feel connected anything meaningful.

Playing and staying with friends is more difficult than it’s worth. It’s hard to find each other, let alone stay together. All too often, if you fly to a location at the same time. When you both come out of hyperspace, you guys are no longer together. The instancing and friend group leaves a lot to be desired. For as MMO-focused as it is, grouping with friends or strangers for combined efforts is a hassle when splitting (because you can’t).

Elite: Dangerous takes the best parts of the series’ strengths, as well as other games that have come before it to make it an excellent space fantasy. This is the freshest, prettiest, deepest space adventure you can take on in any game to date. Its ambition is equally met with awe. There are problems, but ones that can hopefully be fixed. Amid some boredom and tedium along the way, there is a game full of stories to be told only through your unique experiences.