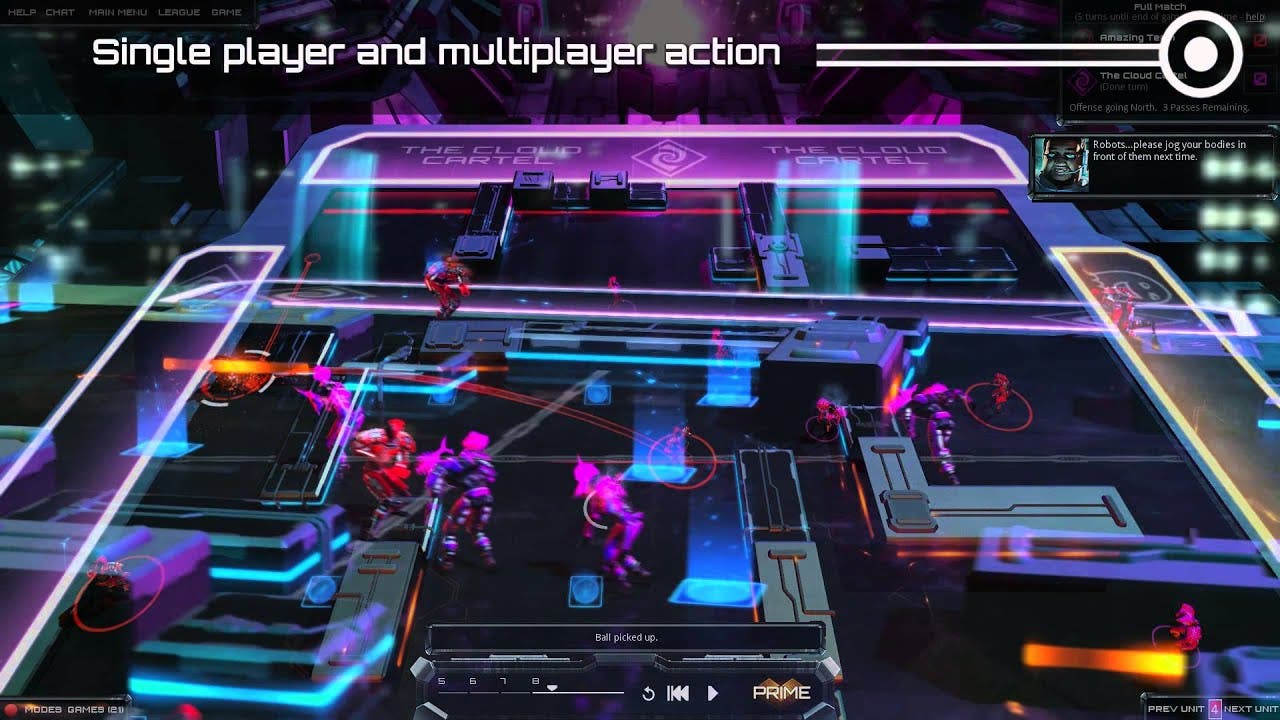 Oxford-based indie devs Mode 7 are exhausted but overjoyed to announce the release of the Frozen Cortex Single Player Update.

Frozen Cortex is a simultaneous-turn-based tactical game and the spiritual successor to Frozen Synapse.

It is an epic turn-based cyber Blood Bowl / Speedball type-affair, if we do say so ourselves, and we do.  There’s no “if” about it.  Some people like it, which is lovely.

This update adds Knockout, a kind of rogue-likey-likey permadeath type mode.  Get as far as you can without losing a single match, using only limited (and somewhat randomised) player upgrades each week.  Rewards will come for doing specific things in matches: it’s up to you to figure out what those are.  It’s pretty hard, but a lot less annoying than a kind of massive, vague flaccid league mode.

Also available is the somewhat-less-hardcore Global Cortex League mode, a more traditional league where the aim of the game is simply to do as well as you can in a season.  Earn cash to buy new shiny robot players.

Finally, there’s the Random League mode which pits you against a vast array of randomly-generated teams.  This is the Wild West of Cortex.  If you happen to like massive vague flaccid league modes…then this is for you!  Except it’s really good.  Yes.

Each one of these modes has sub-modes with various difficulty settings and rule variants, including Timed Turns: think speed chess with more robot punching.  There’s also Killer where you can knock your opponent’s robots out of the game with a single hit.

A vast number of unique players have been added: you receive these players as upgrades in Knockout, or you can purchase them with your winnings from matches (or in-game gambling) in the League modes.

Also featured for the first time is Frozen Cortex’s narrative.  A scandal in the Global Cortex League threatens to undermine the entire game and might just be connected to the fate of the entire country…

The narrative develops as the player plays their matches, persisting between playthroughs and between Knockout and Global Cortex League mode.  We’ve tried to tell an involving story while still allowing the player to dip in and out of whichever mode they wish.

Every team has its own AI coach, from Colonel Ruth Levine of the Armed Forces to Administrator Nomura from the media conglomerate SXT Vision.  Each coach has their own unique set of hundreds of in-game barks which are tied into the game’s AI calculations: the AI will complain when it knows you’re going to score; mock you when you’ve boxed yourself into a corner; carefully explain that there was a better direction you could have chosen…

There’s a whole host of little things in this build: one of our favourites is the “full replay” which enables you to watch your entire match back in the 3D Outcome Mode.

What is Happening Now

Mode 7 is now fully engaged on the genuinely appalling business of fixing the remaining bugs as well as doing any necessary balancing based on the reaction to this update.

Frozen Cortex is due to burst vigorously out of the amniotic sac / cyber womb of Early Access in February.  That is very soon and we are all terrified.