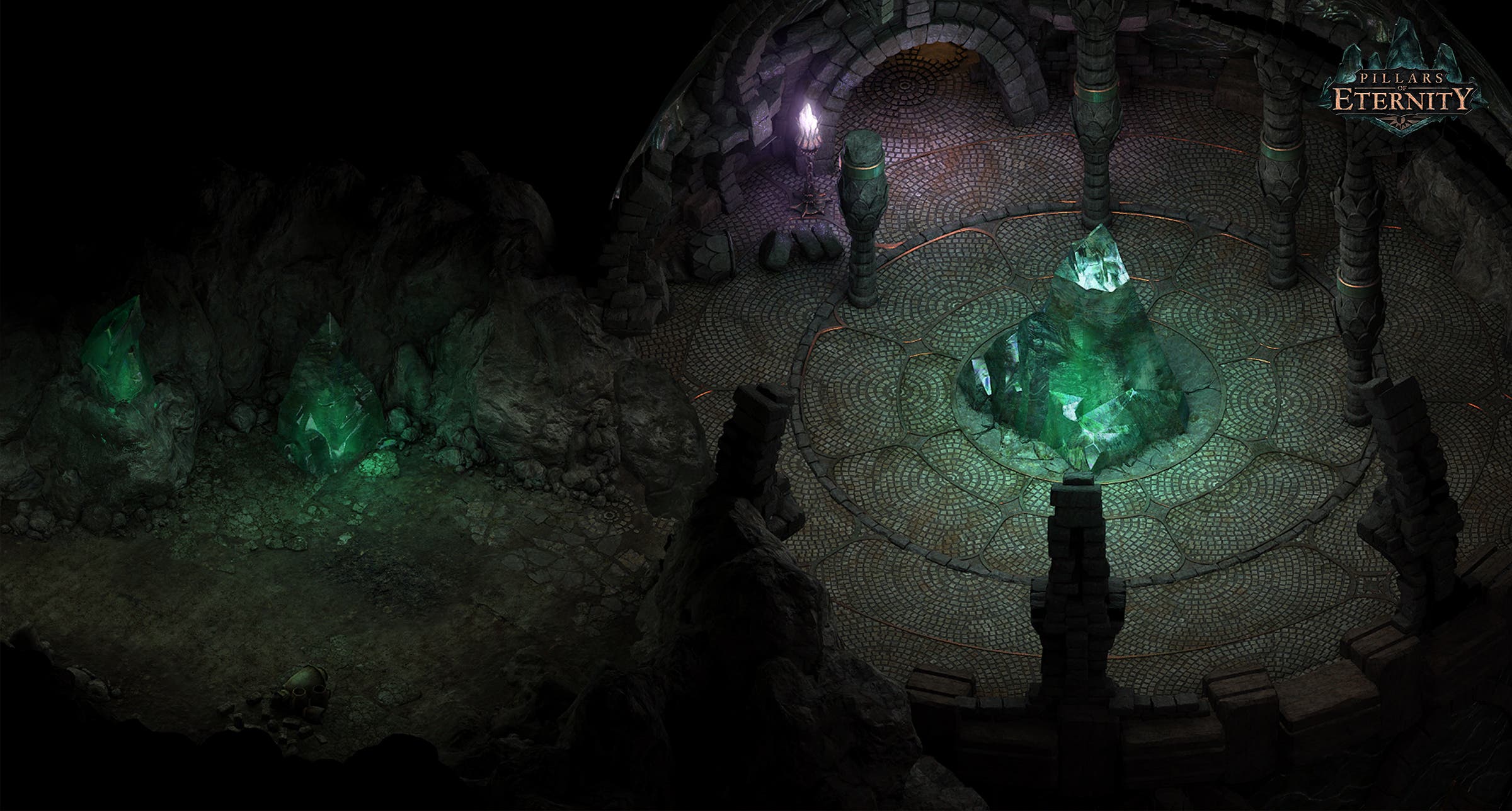 Pillars of Eternity is not Baldur’s Gate, Planescape Torment, or Icewind Dale. It is an amalgamation of all of those games, in a unique blend that provides a deep experience in a whole new universe with only tinges of familiarity to be a standout among its those that came before it. Pillars of Eternity is an wonderful and fantastic RPG that will have you enthralled from beginning to end, however you get there across the dozens upon dozens of hours. 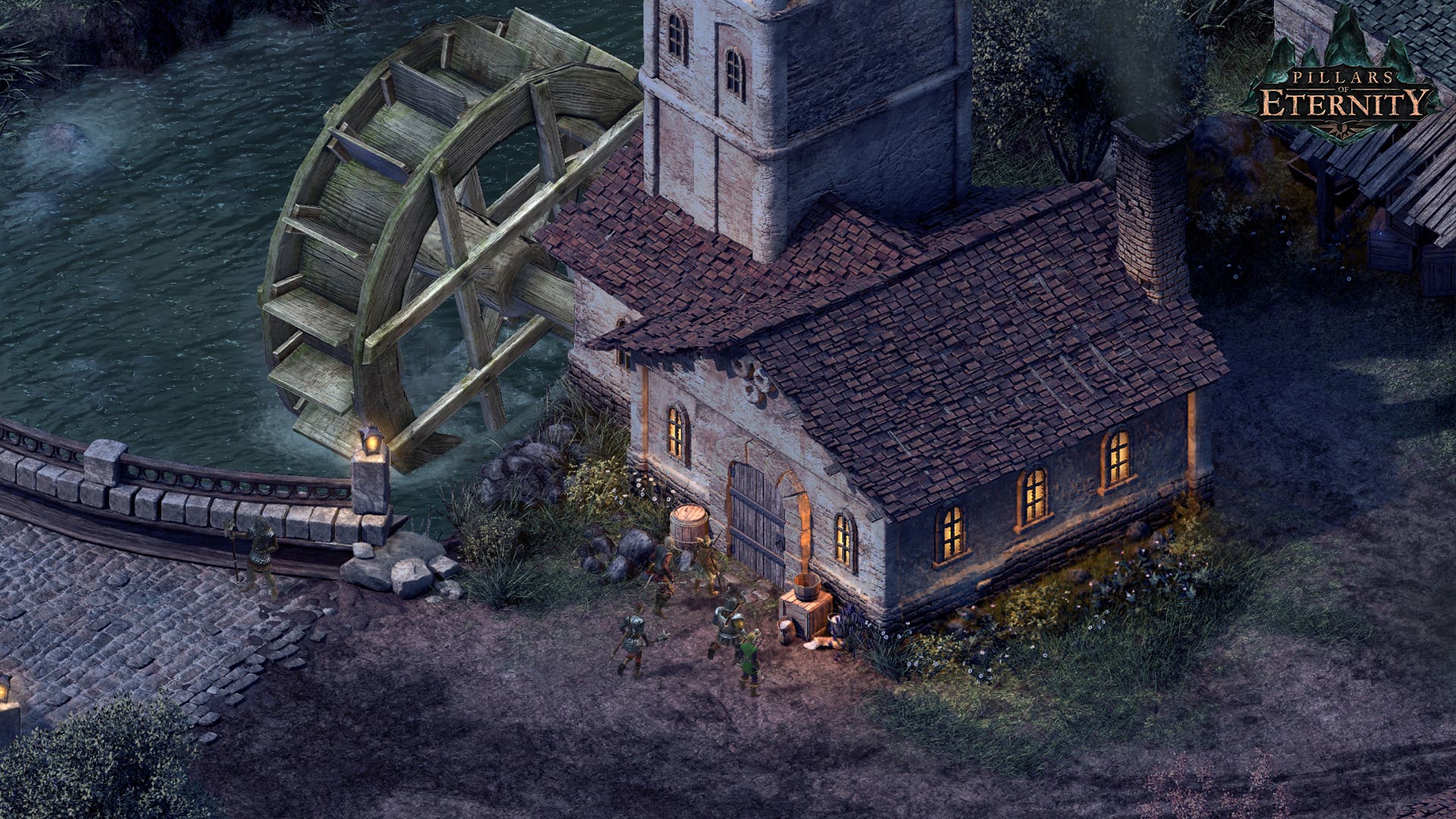 From the look and sound, to the gameplay. Pillars of Eternity appears to be a lost Infinity Engine game now found, but it is actually a game made using the Unity Engine. And one with an unnatural attention to detail. However, some of those details don’t always look great, especially environments that show some pixelation when examined up close. Some of the character models look good up close, but others not. It’s kind of surprising that it replicates the look almost too well to match Infinity Engine-era games. This game shines at a distance, being visually beautiful and distinct from area to area. With day and night cycles, the landscape is able to transform and not feel samey as you traverse through it.

Those averse to reading might be turned off at the heavy amount of reading that is required during conversations. But the writing is excellent, making it a worthwhile excursion to read the books and notes picked up. Reading the lore in the game helps fill in gaps around the world. Conversations do not have the weight of a karmic system, except those characters who are of the church. The voice acting balances it out, though. 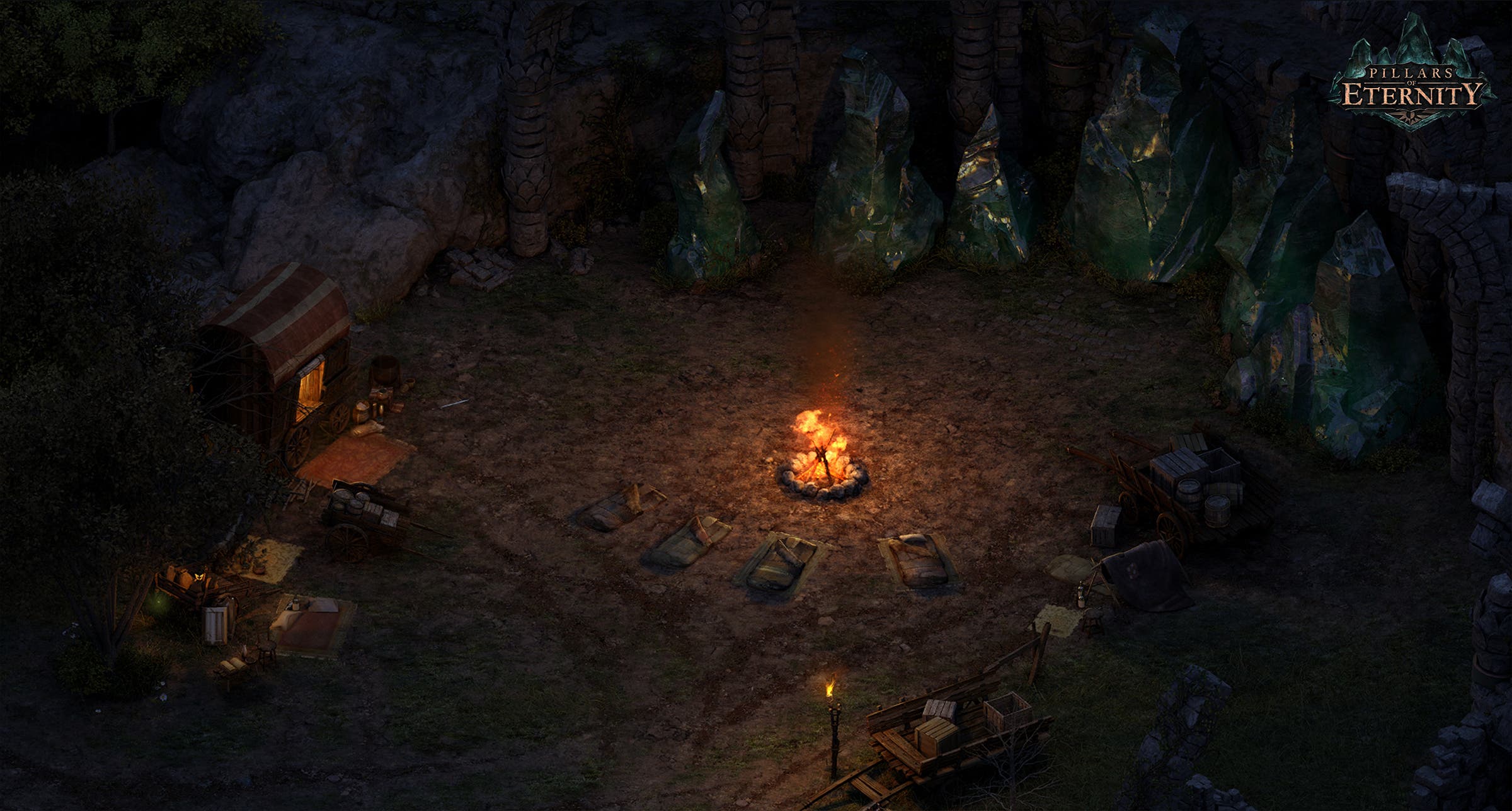 Pillars of Eternity almost has two beginnings. The first opening sets you up to believe things are well within the world of Eora, only to have the rug ripped out from underneath you as the bîaŵac storm ravages your small team. This devastating storm gives way to the true opening, after a wonderful tutorial that is so subtle, I hardly noticed it.

The bîaŵac gives way for your character’s newly acquired ability to speak to the souls of the dead, and see the souls of the living. It’s really cool to see, as the screen distorts and you are able to learn things you otherwise wouldn’t. But it only activates, it isn’t an ability you can use at any time. You are then known as the “Watcher”, and the world has turned against animacy, the study of souls. This is evident by the bodies strung-up on a tree in the nearest town you arrive at. 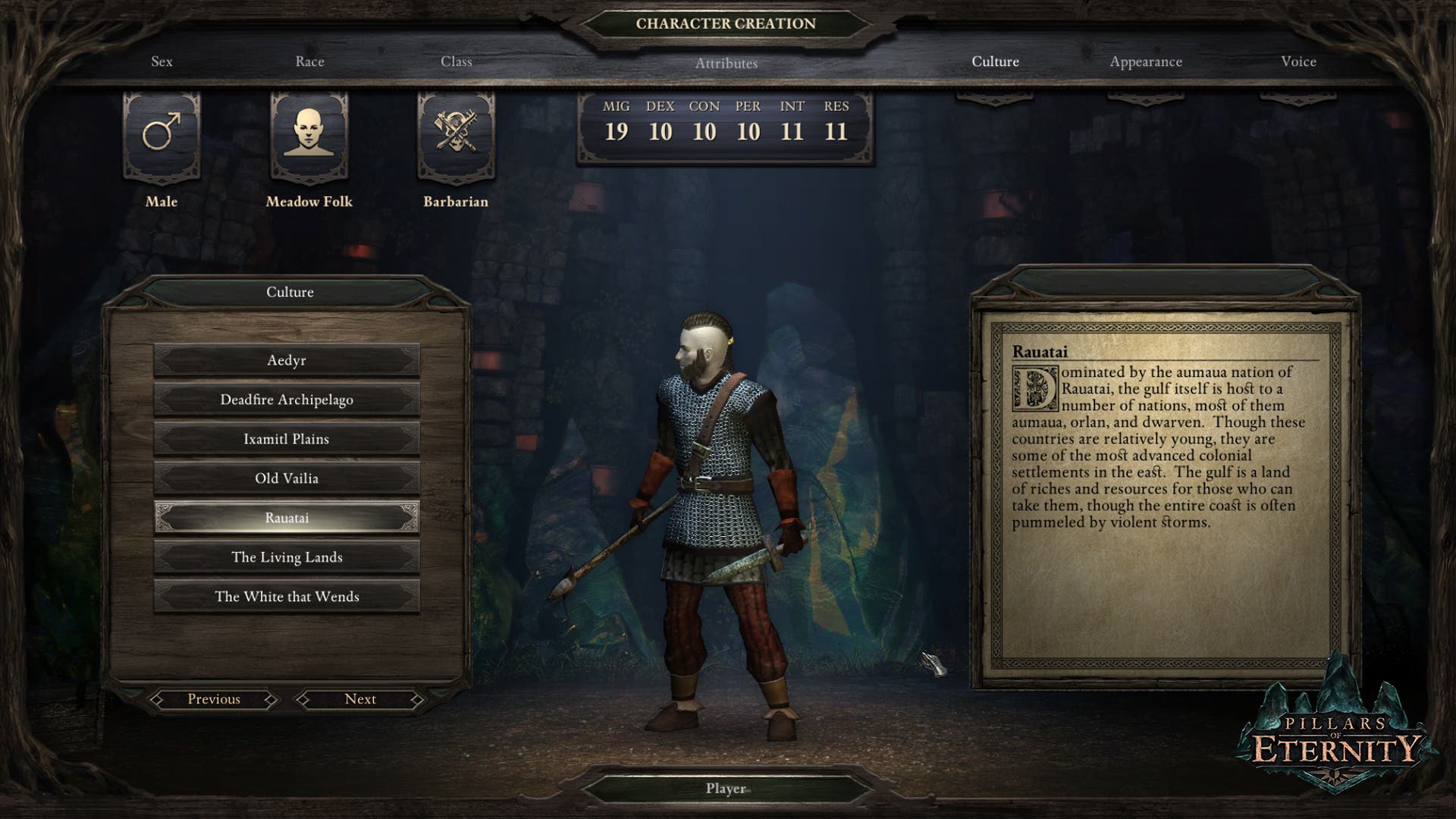 Pillars of Eternity does not have a rule-set within the confines of the Dungeons & Dragons universe this time. It has its similarities to where fans of the older Infinity games will be right at home, but allows for newcomers to see what the fuss was about, all of those years ago without having to play any of them prior to this.

The character creation tool is an extensive customization experience. You’ll spend far too long trying to make the right character for you. And it doesn’t stop at your main character, new characters that join your party allow to be customized. The new and unique classes to the game, ciphers and chanters are intriguing to experiment with. An early priest character, Durance, is a healer that really extends the life of your party and is also one of the most memorable ones you interact with. This was something that was totally enjoyable. And while I didn’t have a random name generator, really felt personal and intimate to create these characters, if I chose to. 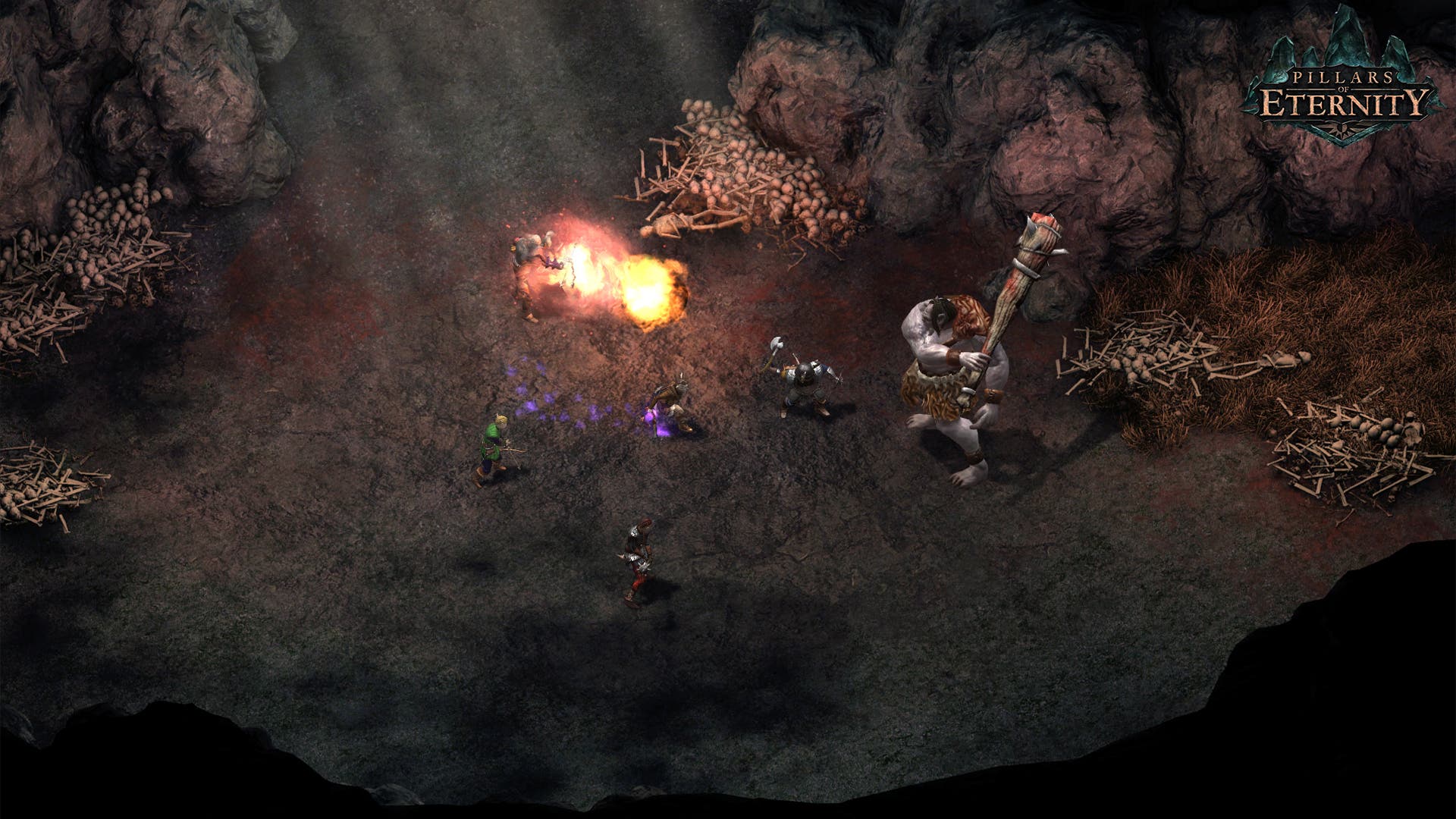 The combat of Pillars of Eternity, aside from the dialogue is the game’s bread and butter. Engaging in combat will pause the game, allowing you to have a tactical advantage and determine the next course of action. You control each party member individually, which when the party grows to six or so, can be tough to manage, as nothing can be automated. Misclicks of characters and abilities happened too often, but I’m not sure if they were my mistakes or the game being finicky on selection. I am happy to report that the UI is wonderful and has been updated several times since release to become intuitive and unobstructed. Difficulty modes can be adjusted at any time, but the iron man mode is an interesting choice. Playing an “iron man” game doesn’t hold that much of appeal to me, as there’s so much to do and see. It’s a crushing blow if you were to die, because the save file gets deleted at that time.

Endurance is a new mechanic for Pillars of Eternity, and games of this type. You can be hit until you run out of endurance, which renders you unconscious. After the battle, you get back up. If you don’t rest at an inn or campfire, you may be low on health. Should that health reach zero, you become maimed and can be killed. When the dust has settled, loot is available to be picked up. It can be placed into a character slot or into their stash. 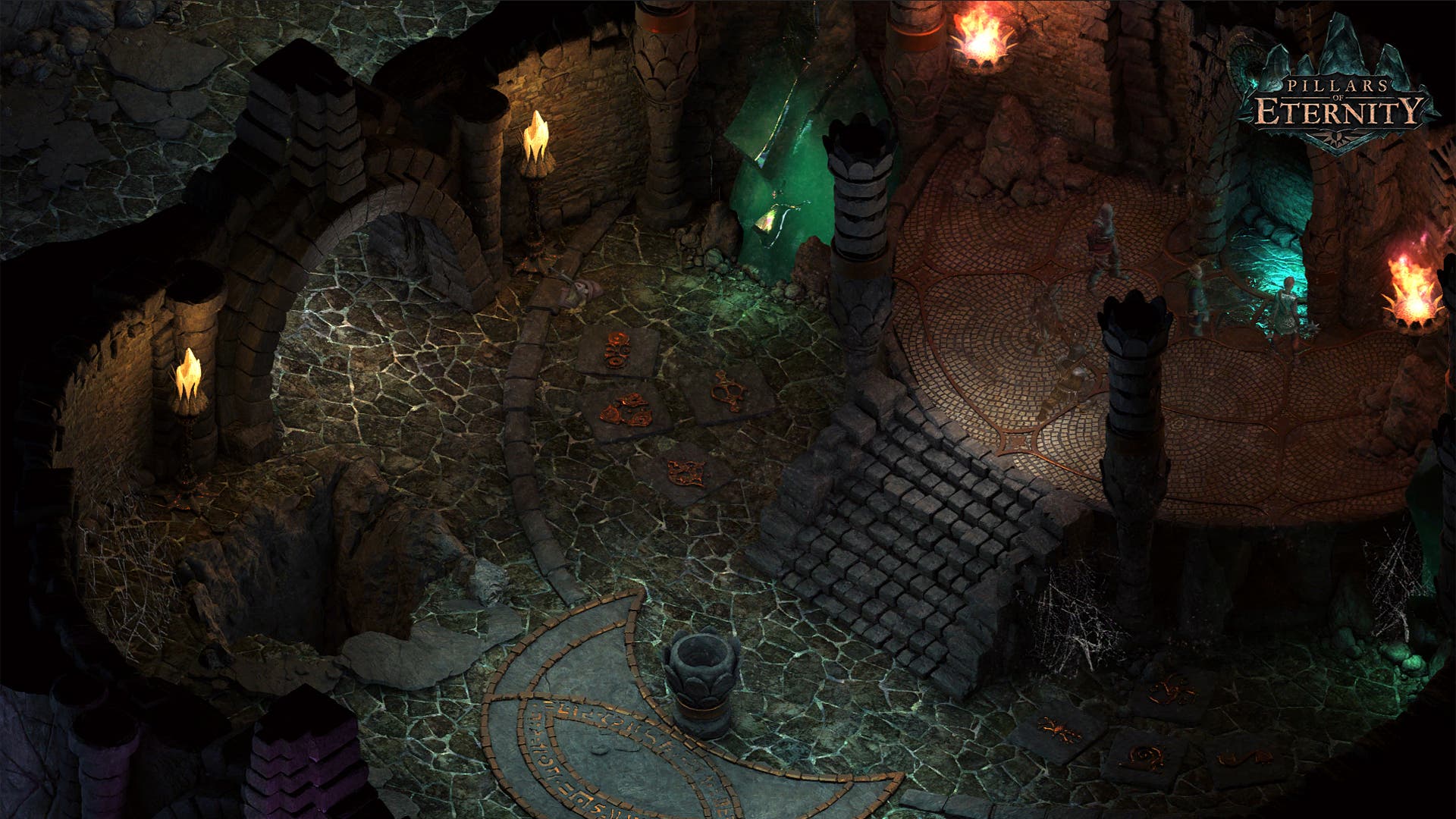 While not traditional, XP that is earned does occur from killing things. Everything else you do, does. And when it is time, you can level your character, and update attributes. Some attributes can be maxed before you run out of points. You can choose new abilities to use in combat in different ways, buffs and active.

Roaming the world of Eora, and coming across the Eastern Reach is a beautiful, disastrous place to be. The action of doing things beyond walking like climbing a wall is told through a vignette with some choice. It becomes a form of interactive storytelling and akin to an adventure game instead of a boring, unncessary cutscene that would have cost extra to make. The stronghold, becomes a personal and customizable sanctuary that improves with money spent on it, much like that of Ezio’s villa in Assassin’s Creed II. 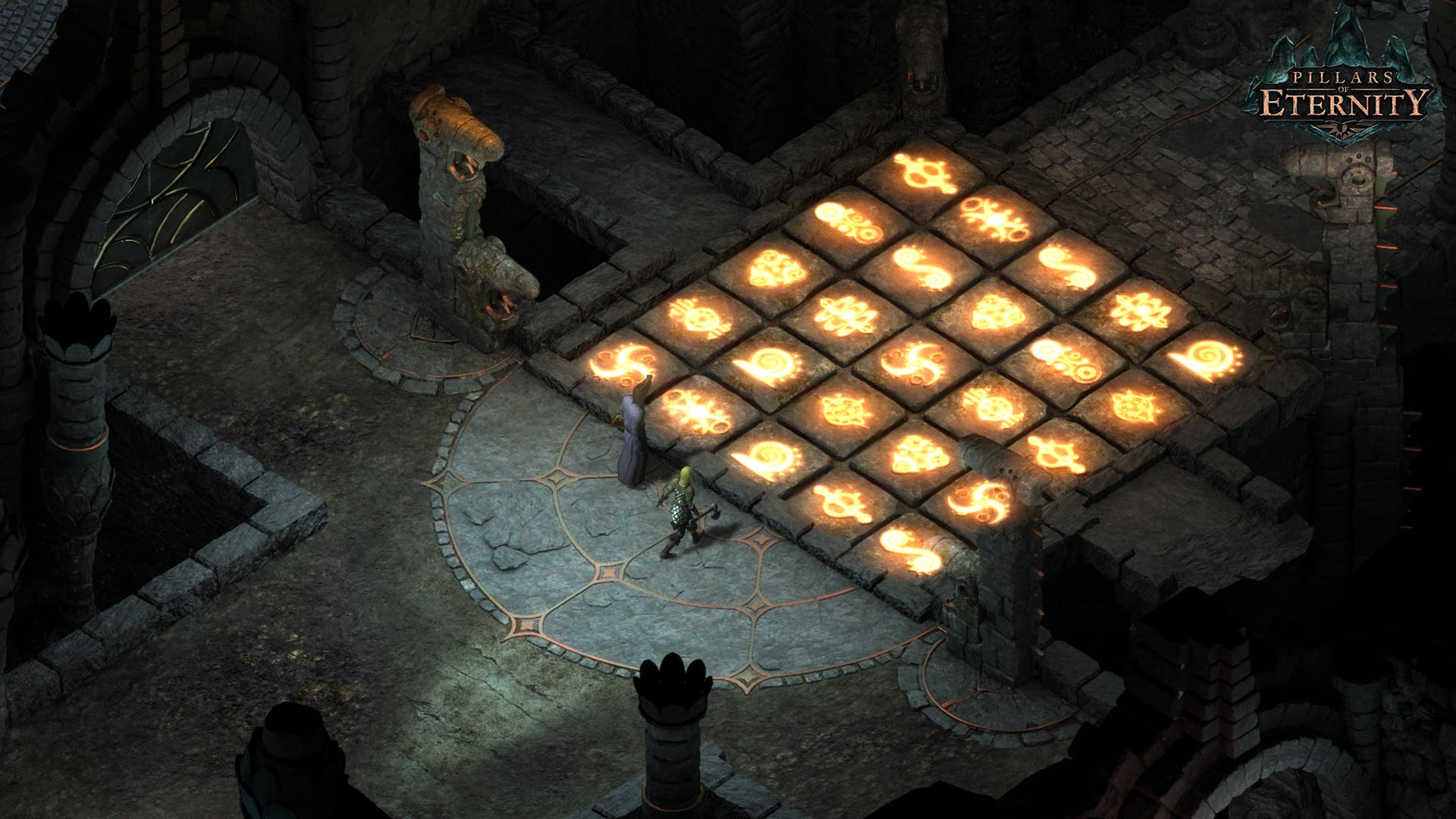 You’ll take on main quests, side quests, and tasks to perform at any time, with no real urgency. And quests can be resolved in multiple ways. Side quests are more involved than you are led to believe. As you talk to random NPCs, you’ll learn that they all have purpose, even if they’re not relevant to you. Everyone has something to say, voiced or text, and it is some rich world building to provide a living, breathing world that helps immerse you further into Pillars of Eternity. Sadly, the origins of this being a Kickstarter-funded game is plastered all over with memorials and NPCs with unusual names that break immersion.

Pillars of Eternity‘s Cyclopedia is filled with everything in the game, but the details are sparse, and only get updated the more you kill the same types of monsters. It provides incentive to explore, fill it out, and otherwise learn as much as possible. 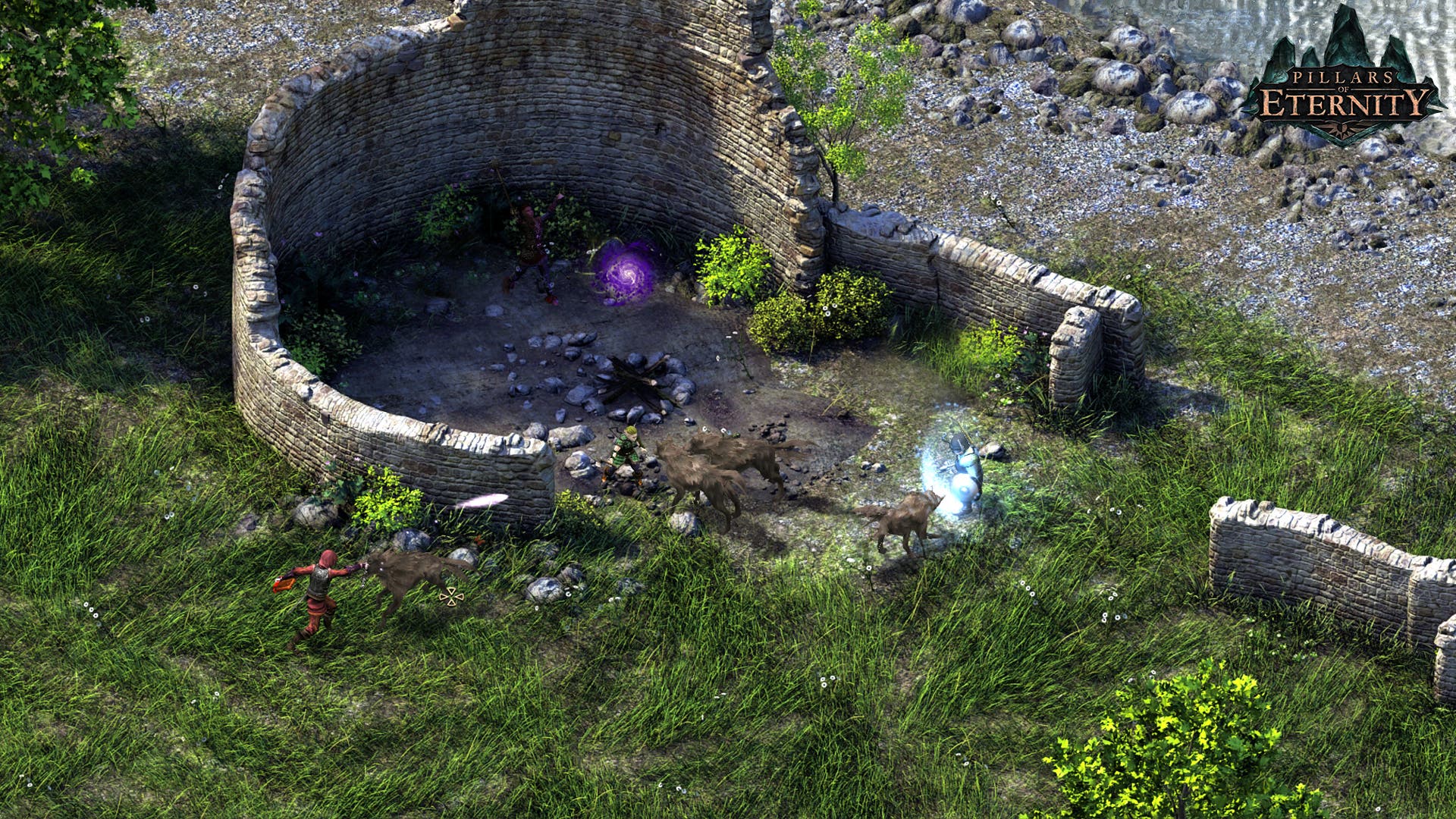 Thanks to Kickstarter and Obsidian Entertainment, we have Pillars of Eternity in its completed and final form. And we are all the better for it. The classic early 2000s gameplay works well for 2015. It is smart, beautiful, engaging, and wholly entertaining that fans of RPGs need to play as soon as possible.