Project CARS is a no-frills simulation racing game that’s all about player choice, where you drive the best cars in the world with an accurate and demanding simulation of their real-life equivalent, and looks really good while doing it. There’s a feeling the game is too broad in scope, trying to appeal to too many racing fans that ends up spreading the car selection too thin. Project CARS lacks a bit of personality, but the game is also what you make of it when you are behind the wheel. Project CARS is a rookie that rivals the veterans that are Gran Turismo and Forza Motorsport.

Before the days of Kickstarter, Slightly Mad Studios ran their own crowd-funding campaign for a racing game with the working title Project CARS. The “CARS” in the title actually stands for Community Assisted Racing Simulator. Turns out the name stuck and the working title became the actual title. This project has manifested into an actual game you can play, a game in which you drive real cars on real tracks for the sport of racing, not for the money and the fame. Project CARS is a simulation racer that’s synonymous with the word “hardcore”, an accurate way to describe its authenticity, even if that means it will prevent many from playing it due to its difficult tendencies. 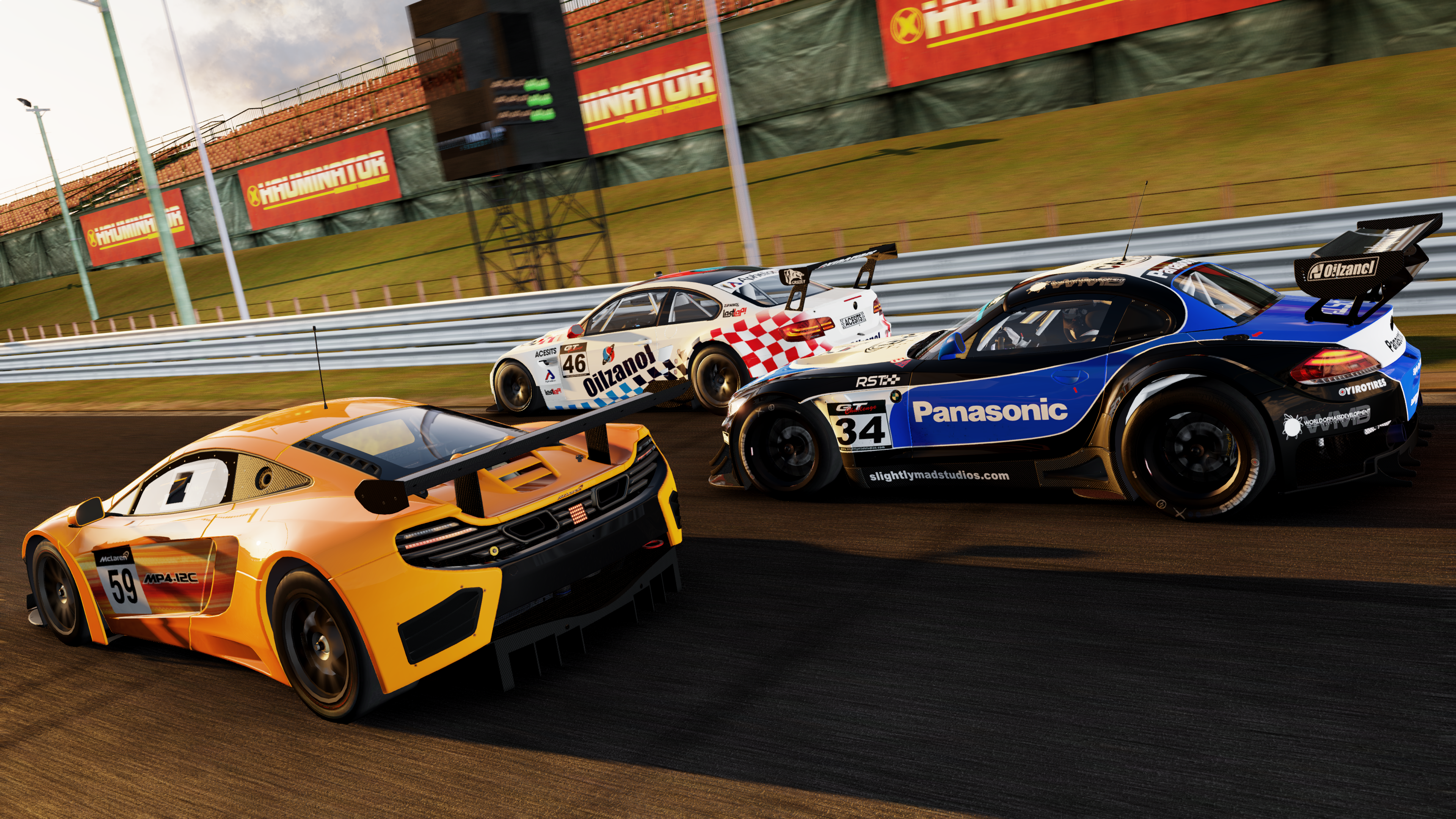 The first screen you see after starting Project CARS, asks you to choose of how you want to tailor the game’s assists and settings that best fit you. These options will set how difficult the AI is, what camera view is selected, what guidance in driving there is, how damage is dealt, and the speed at which things degrade through wear. After that choice, you’re free to do as you please. You can jump straight into online, a time trial, or the old standard, the career mode.

Project CARS is completely open to letting you decide how you want to play the game, there’s no limitation. The eight available racing disciplines are broken down into tiers, with Tier 8 starting with kart racing, but if you want to shoot straight to Tier 1 for LMP (LeMans Prototype) Racing, you can totally do that. Once you’ve signed the contract for the chosen career path, you’re set for the season, but not locked out of other opportunities. The game does have multiple save slots, so you can juggle different careers across the game’s different tiers and disciplines. The career focuses on you as the driver, complete with a nonsense fake Twitter feed to give you feedback on your performance as a driver. There’s an email system that isn’t entirely pointless, as you’ll be often invited to different tiers through this system. It tries to be something more  than it is, and besides the actual racing itself, that’s it for career mode. It’s bare-bones, deep for its authenticity, but manages to feel hollow as an experience. The career mode lacks any formal progression of what we’re used to in other racing sims, and outside of winning races, there’s no purse to pocket any earnings.  There’s no money to earn because there’s nothing to spend money on. The game’s design wouldn’t benefit from having these systems in place. There’s some decidedly old-school design philosophies at play here, and those who are looking for nothing but a pure racing experience might walk away disappointed. Races are very authentic to their real-life counterparts. You’ll do practice runs, qualify for race 1, and then qualify for your position in race 2. Qualifying is huge, not only in the game, but in racing. You can skip this, but you will always be placed in the back of the field of 19 other drivers, fighting for a meaningful position by race’s end. When it is time to race, the first is a sprint race from a stop, followed by a traditional race from a rolling start. The duration of these races can be set to be however long you want, but the shortest is a 2-lap sprint, followed by a 5-lap race. During the race, you’ll be required to pit, and your crew chief will let you know when it is time to do so. Quick Race Weekend or Free Practice allow for custom settings to include setting the day, time, and weather. The game even reads the current day and time to use while racing for a real-time race. There’s even an option to accelerate the time of day up to 240 times normal speed, which looks hilariously awesome. Or alternatively, you could run a 24-hour race in real-time, with an achievement to earn when it is all said and done.

There’s support for an insane amount of wheels and gamepads to ensure that whatever you have, will work. I used a DualShock 4 which emulates a Xbox 360 / Xbox One gamepad that worked wonderfully. Within the control settings, there’s presets that are tuned for varied settings such as steering wheel sensitivity. I decided that preset #1 was the most comfortable and kept me mostly in control of any car I got behind the wheel of. Regardless of your control settings, if you do not feather the gas when starting any of the practice runs, qualifying laps, or actual races of letting your tires warm up, you’re bound to spin out and have a hard time recovering. With a grand total of 64 cars in the game, the car selection is modest, at best. There’s a considerable amount of car manufacturer names missing, like Chevrolet, Dodge, Ferrari, Lamborghini, and many more you’d expect to be on a list covering so many different racing leagues. With these notable manufacturers just not there, it’s a bit of a disappointment considering what this game’s engine can do, and all of the places you can go, having more cars to do this would be a plus. There’s potential of DLC filling in these gaps, but it’s unfortunate it isn’t there from the start.

The track number rivals that of the car selection, and add in the variations of each track and there are actually more in quantity. The track selection is excellent, featuring tracks well-known from other racing games like Watkins Glen, Silverstone, Laguna Seca, and the Nurburgring. There are new tracks never before seen in a racing game, such as Cadwell Park and Sakitto. A couple of real-world inspired locations make their way into the game, Highway 1 in California, and Azure Coast which offer a real sense of place, and a bit of a playground outside of a confined track. 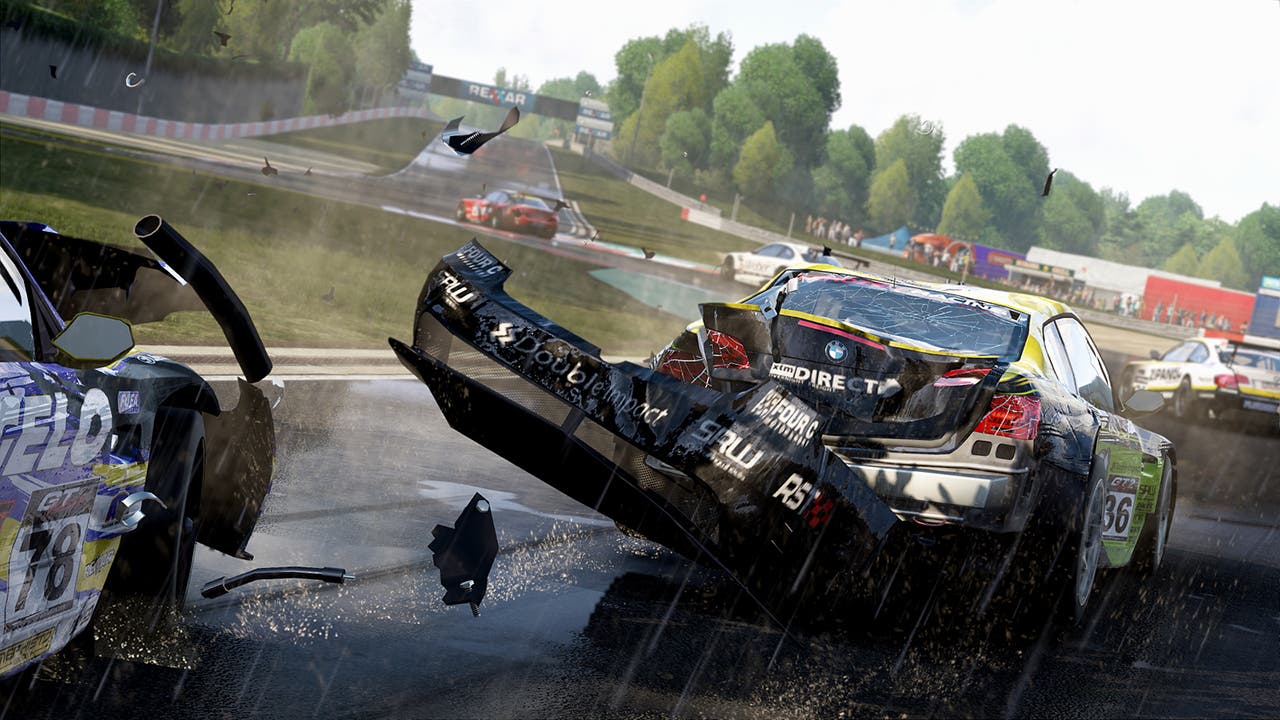 The game will record your accolades, time, and distance spent inside a car onto your player profile. The garage lets you customize your cars look, even with the ability to use a custom livery. Though, there is no way in-game to design such a thing, nor is there a way to upgrade cars from stock to race-ready. Tuning options are the only thing that let you dial-in your exact car specifications so it handles exactly like you want it to. Damage can be set to however you like, whether it is just visual damage or full-on mechanical damage, where the cars break apart in beautiful ways as particles litter the sky as they begin to land onto the race track. Mechanical failures can be enabled to where the engine can blow, this happens randomly, introducing chance into a game that’s already difficult enough.

Take the racing online and join a server that’s already in-session, and participate in a full race weekend for that proper competition. The game’s singleplayer AI is interesting, and will go off-track to avoid you. But beyond that, they don’t make mistakes without you being around. Meaning, they won’t go off-track, or collide on their own. Competition against the AI is stiff, but competing against real people is the true challenge. Community Events and Time Trials round out the available online capabilities of Project CARS for asynchronous competition.

There are the traditional camera views you’d expect a simulation racer to have, and a returning view from Need for Speed Shift 2 (another Slightly Mad Studios-developed game) is the helmet view. Not only is your vision further obscured while in the cockpit, but it also automatically looks into the corners as you would when driving a real car. It’s a neat effect to further immerse you. Something I’ve never seen before, is the ability to set individual cameras field of view for chase, bonnet, roof cams. Even such a minor detail doesn’t get overlooked by Slightly Mad Studios.

The game is incredibly realistic-looking. Tracks are masterfully detailed to their real-life counterparts, the shadows cast from trees move with the sun’s changing positions, and the tarmac reflects light like no other game I’ve ever seen. The cars themselves are impeccably detailed to show off every detail when scrutinized in the game’s photo mode. When weather comes into play, Project CARS visuals take all other competitors down. The realism is frightening paired with driving a car at 100mph with other cars around you and the feeling like the tires are maintaining grip as lightning flashes and rain is beating down your car as you can hear each individual drop hit. Everything from the lighting to the weather makes the gorgeous vistas of Project CARS very distracting in the best ways. Given the impressive visuals that this engine is capable of producing, I was able to run the game at a constant 60fps with most of the settings maxed out. Project CARS is a no-frills simulation racing game that’s all about player choice, where you drive the best cars in the world with an accurate and demanding simulation of their real-life equivalent, and looks really good while doing it. There’s a feeling the game is too broad in scope, trying to appeal to too many racing fans that ends up spreading the car selection too thin. Project CARS lacks a bit of personality, but the game is also what you make of it when you are behind the wheel. Project CARS is a rookie that rivals the veterans that are Gran Turismo and Forza Motorsport.