The Chaos Black Crusade of Abaddon the Despoiler takes a front seat in this latest batch of screenshots, taken in-engine in Unreal 4. Featuring ships from a kilometer in length to 7.5km and with a fleet comprising of raiders such as the Idolator as the fleet’s smallest all the way up to the The Planet Killer, the capital ship of the Abbaddon, as the largest, see the Chaos strike at the Imperium for the first time.

The Chaos blast through the hulls of their foes with gigantic, powerful munitions such as the macro-cannon battery, the lances, and the Armageddon cannon, all in real-time. If sabotage is your thing, the launch bay will allow you to board enemy ships and wreak havoc from the inside!

Taking place during the 12th Black Crusade — or Gothic War — Battlefleet Gothic: Armada puts players in the middle of war between the Imperium and Abaddon. Consisting of hundreds of planetary invasions and naval battles, players will be at the center of every fight, commanding fleets of gigantic ships as the Chaos unleash a sequential chain of surprise attacks on Imperium naval bases — the start of 20 years of warring in the sector. 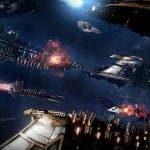