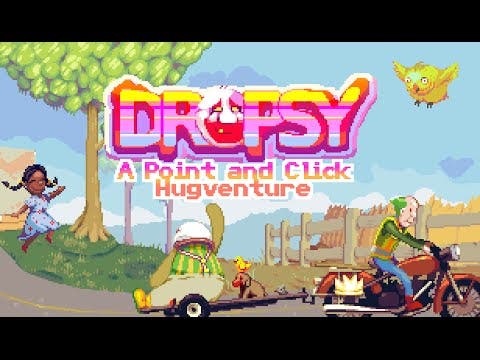 Dropsy is a non-traditional take on the classic point and click adventure formula starring the games perpetually carefree namesake clown as he explores a richly detailed world full of colorful characters and sinister secrets, doling out hugs along the way. Rather than lead players on a singular narrative path, players are free to choose which avenues of adventure they want to explore in an open world setting and can piece the puzzles and story together however they choose.

…, said Dropsy the Clown, as he is unable to speak.

During the quest to clear his name after a deadly circus fire, Dropsy will encounter a peculiar cast of folk to communicate with through visual icons rather than the traditional text dialog trees. Through these rudimentary conversations, Dropsy takes players on a self-aware journey of self-discovery with a story that harnesses powerful themes of love and redemption  Dropsy the character is an outsider, longing for a community to call his own. Along his adventure, players will find answers to geographically based puzzles, unravel dark and shameful secrets from his past, and collect fancy items to stuff in his elastic waistband for use along the way. Oh, and Dropsy can also talk to animals.

The first one million gamers that purchase Dropsy will receive a certificate that entitles them to a free hug from developer Jay Tholen, said Devolver Digital CFO, Fork Parker. Nobody hug me though, I find gamers off-putting.