Grow Home, the Ubisoft experiment, is coming to PS4 Today, Ubisoft announced that Grow Home, a quirky experiential climbing adventure developed by Ubisoft Reflections, will be available for download on PlayStation 4 on September 1st, 2015.

In Grow Home, players are free to explore a strange open world full of floating islands, majestic caves and waterfalls set in a beautiful and minimalist art style. Players take on the role of BUD (Botanical Utility Droid), an excitable child-like robot sent on a mission to search the galaxy for a new species of plant that can save his home world.

By growing and directing the giant Star Plant into a towering organic sculpture, players reshape the planet and create a magnificent landscape that lets them climb to great heights. The game’s innovative climbing controls and BUD’s unique abilities challenge players to continually reach for higher ground – but one wrong move and it’s a long way down! 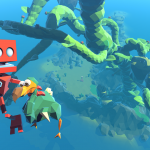