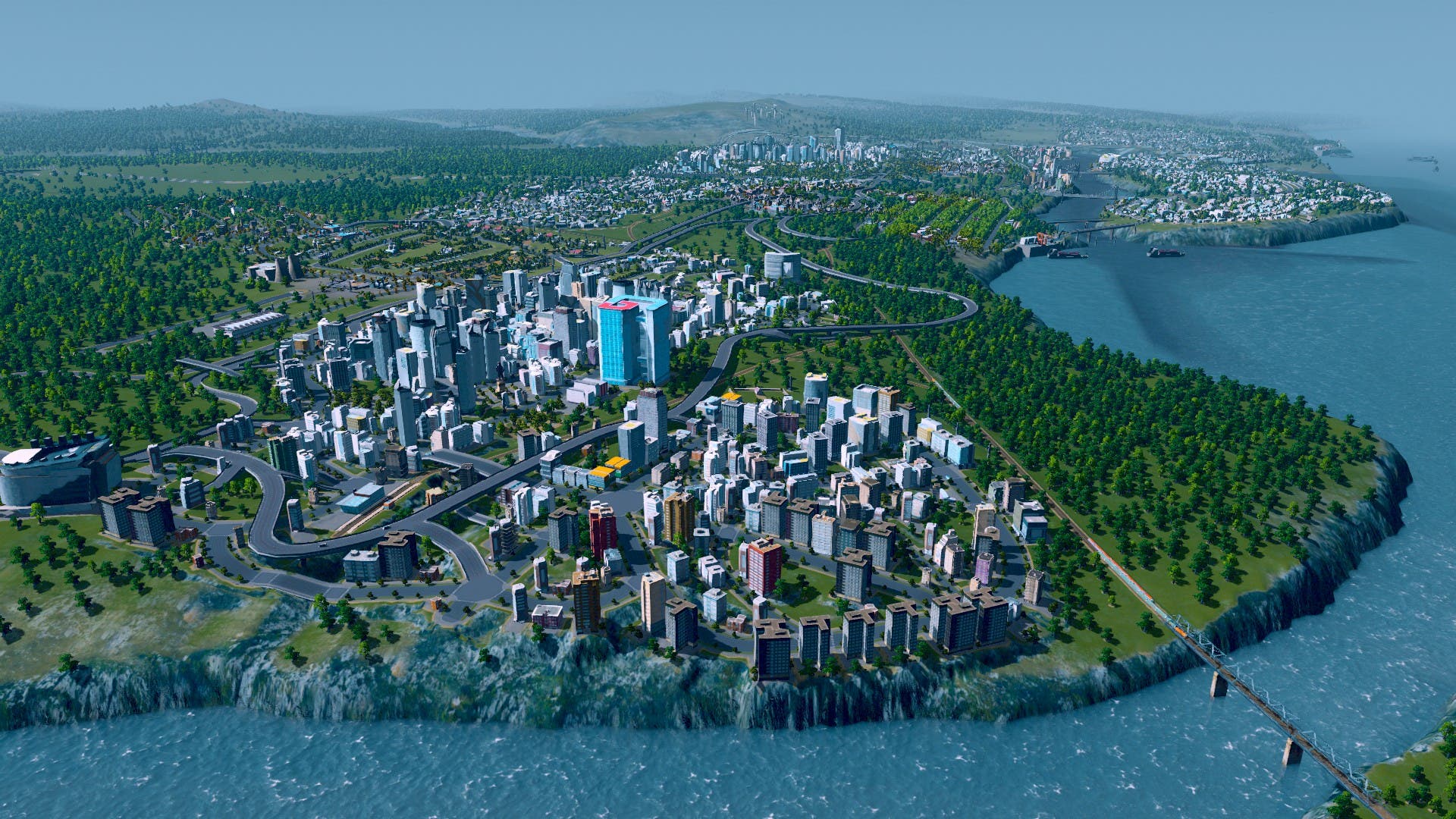 Your first city in Cities: Skylines will be an unmitigated disaster. It’s a familiar game if you’ve played a SimCity or something analogous before, but there’s just enough differences that you have to learn all of its systems in a new way. Colossal Order does a decent job at giving you tooltips, chirps (the game’s equivalent of tweets), and advisor notes on what to do, but you really won’t have a handle on it until your second or third city. This is really okay, because the time spent in Cities: Skylines is a joyous one, and one of the best city builders ever. Much of Cities: Skylines revolves around routes, whether it be for plumbing or traffic. Making it efficient, cost-effective, and simple to manage will benefit you, as well as the city. Colossal Order is no stranger to asking you to route things, as their first two games were just that, in Cities in Motion and Cities in Motion 2. Those games were just a couple of steps away from being a city builder themselves. And now Colossal Order has gone whole hog on that experience. It’s a bit tedious to build plumbing for pipes with new additions in a city. Since buildings can only be built roadside, then pipes should be a part of that system.

There’s harsh lessons to learn with your first city, like unknowingly placing your sewage output upstream of your water intake. This will pollute it. There’s an info screen that will show you the way water flows, but it isn’t apparent at first. It’s also terrifying when pollution runs rampant or you don’t have a fire department close enough to put out a raging fire, and then bad traffic causes buildings to get torn down. It’s also very easy to spend more than you’re making, then taking on loans that you have no hope of repaying. Once you learn how not to do these, you’ll be better off with future cities. Cities: Skylines also teases you into thinking you’re confined to a 2km x 2km square tile, just like in SimCity (2013). However, as your city grows, you gain access to the land around you, allowing you to expand in 4 square kilometers at a time for up to 36 square kilometers in total. By this time, managing this land shouldn’t be daunting or overwhelming, as you should have a good handle on everything by that point. It’s certainly a massive land to behold and marvel as it continues to evolve into a megalopolis.

It’s easy to get started, you start placing roads from the highway that runs by your plot of land, then you zone for residential, commercial, or industrial based on demand. As your population increases, you’ll be able to “paint” districts for your locations. You should be mindful of placement, as industrial next residential can make everyone unhappy. Or if the ground gets polluted, you’ll find similar unhappiness. You’ll see buildings appear automatically, showing up faster based on the demand. With every zoned area, you must bring electricity and water (sewage and fresh water) to the area for their basic needs. Milestones gate progression in a meaningful way, so it doesn’t allow you to spend money on things too early and get yourself in a bad way. Things like implementing policies such as: the banning of smoking, encouraging recycling, or allow legal marijuana has its pros and cons, whether they are financial or happiness. Subsequent playthroughs make this a bit frustrating, but it is all for the sake of not accidentally overindulging or overinvesting in the future that puts you towards bankruptcy.

Money is always a concern, and sometimes as the mayor you have to play as an accountant, always balancing things to ensure you have more money coming in, than out. If mistakes are made (and you haven’t saved recently or have auto-saves turned off), you can apply for loans from banks where you have to pay them back over time and including interest. Cities: Skylines is not very informative when you need it to be, as it relies heavily on graphs over straight data, there’s a bit of “style over substance” that can be found in the game. There’s a certain satisfaction from watching your citizens from afar, and even up-close. You’ll see their reactions with the changes you are making through chirps (see: tweets) or by clicking individual people that you can rename and seeing what they do. These are basically real people leading real lives, save for the fact days span in seconds and the sky never turns to night.

Cities: Skylines certainly encourages urban renewal, all for the sake of improving your city. The buildings of Cities: Skylines are European-inspired, where it doesn’t cater well to American audiences except with the monuments that can be placed, like the Statue of Liberty. And now, with a team consisting of only 11 people, you’d expect they’d model what they know and see on a daily basis in their home country of Finland. Replayability is a bit lacking when you get good at the game. Mods allow anyone to enhance and customize their game however they want. Colossal Order have provided the tools to create your own assets, maps, and share save games with other players through Steam Workshop. Now, mods disable achievements – but thanks to mods, you could get the mod that re-enables achievements.

While Cities: Skylines doesn’t have a traditional multiplayer mode, weather systems, or disasters, it is a very fulfilling experience. You can and likely will create your own financial disasters or other kinds of disasters through mismanagement, and that can be enough to satisfy those who look for a little chaos among their order. Cities: Skylines is fine just without any of the above. Paradox adds Cities: Skylines as a recognized and extremely well-done city-builder in its collection of memorable and respected games. The newly announced After Dark expansion looks to address issues from the main game, that even I have in regards to lack of a night mode and things that would happen during this time. Mods will continue to fill in the gaps wherever Colossal Order may not be able to prioritize a new feature, fix or an update to enhance the game. If you have any fondness for this genre, you’ll find no better in Cities: Skylines.

A Steam code was provided by Paradox for review purposes