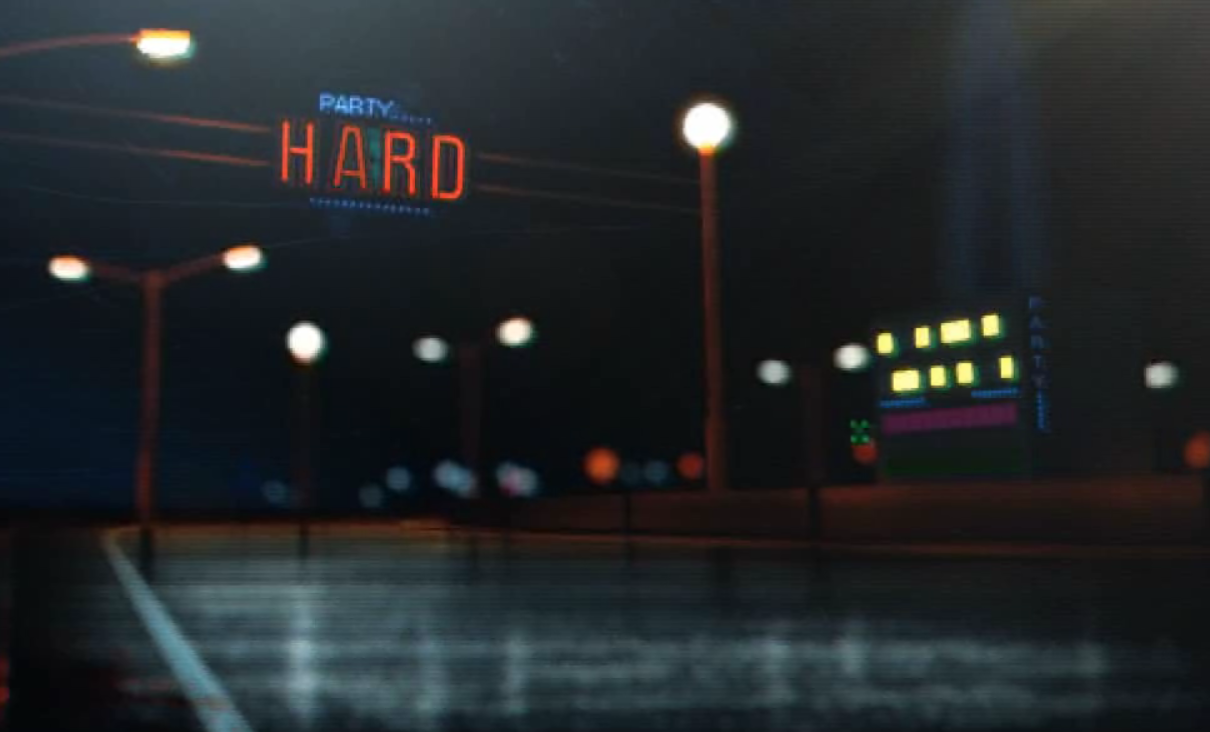 In a surprising lack of partnership with Andrew W.K., comes Party Hard from Pinokl Games and tinyBuild. The main character essentially lives this line from W.K’s titular song, “Do what we like and we like what we do.” This is a methodically paced game about a serial killer needing to dispose of everyone before moving on to the next area to continue his rampage. Party Hard is a clever game where you must blend in and kill the party.

Party Hard is seemingly simple on paper, but not so much in execution. This is a game that requires patience and correct timing to make each kill go unnoticed. There’s a certain “wash, rinse, repeat” to the dozen levels the game has, as the objective is always the same: to kill everyone in it. That main objective implants a “just a one more time” mentality when things don’t go your way, and when you finally get that last kill, is so satisfying.

How you kill is where your creativity and timing can come into play. There are traps such as poisoning food, tampering with generators, overloading a large speaker, set something to collapse once someone is near, and even let loose a running car to kill several unsuspecting victims with ease. These all add to a combo score which boosts your overall score for the end of a level. What do you do with all the dead bodies? Well, in order to keep the overall party calm, you should dump bodies into ice chests, coffins, and dumpsters for extra points. If you manage to get down to the remaining 10 people, and have too many people grouped together, you can press the dance button to steer people away and allow you to pick them off. The game does have its consequences. If someone sees you murdering someone, you can either kill them first, or they will run to the nearest phone and call the cops, outing you. At that point, you must evade the cops long enough for them to give up. There are quick escapes that can swiftly get you from one place to another unseen, and potentially lose pursuing cops. If you kill cops, the FBI comes to investigate, and may never leave. It’s entirely possible to finish off the last remaining people while the FBI was still searching for you in the other room.

There’s even consequences from escaping the cops, like having a dude dressed like Mario coming in and blocking your quick exits like hatches, windows, and slides. This forces you to think more carefully as what previously got you out of a sticky situation is no longer there. This is further enhanced by the fact that you, the Party Hard killer can’t sprint for long, and takes a twice as long to recharge. Items in briefcases and by mysterious strangers get left behind such as smoke grenades, stun bombs, bombs, pizza, and more. These items are seemingly randomized as to when, where, and how often they are appear. There will often be times you just want to restart a level to get the item you want. There’s even some mild repositioning of assets and people upon restarting, so there’s nothing 100% set to rely on. The times you get lucky with well-placed items are special. During the Rooftop Party level, I was able to set fire to the dance floor (literally, not figuratively) and kill half of the victims one massive combo.

There’s other playable characters, but have minor differences between them, and are unlocked by completing the game. But most of the time, you’re playing as the main Party Hard killer, and only a few chances to play as someone else. It’s a wonder why they bothered including others at all.

There are some logical faults to the game, such as the fact that the police, EMTs, and firefighters can be called multiple times in a row, but nothing happens – there’s no penalty for frequent calls when dead bodies are found. You can also carry people who blacked out drunk, and no one ever bats an eye. Though these came to mind, they hardly kept me from playing, in fact, they were a blessing.

There’s also some bugs with the game: characters glitching out, the music stopping (not related to the DJ being killed), playing as a woman will still get you “this man is a murderer” text, and other oddities, that it too does not distract too badly from playing the game for extended periods of time.

Across the 11 levels, the game traverses the United States while a detective is on the manhunt for you. Each location is unique, themed, and a raging party. About midway through the game, levels will demand more of you as they take away a lot of the traps, forcing you to be stealthier and creative with your killing. There’s a bit of a throwaway level on the Party Bus, where you can kill everyone in under a minute without any consequence. It’s a “gimme”, but a really fun one after struggling with the prior level.

If you’re looking for an added challenge, you can enable Twitch integration, so that when you’re streaming, that chat can vote on things that might mess up your game, like sending in a SWAT team. Or, less nefarious situations like sending more people to the party, making more work for you, but potentially getting a higher score. I think this is where Party Hard really begins to excel, is in the dynamic nature that others can force upon you. Party Hard is a bit repetitive from level to level, but the open nature of “kill everyone” as the objective in every single level is somewhat cathartic. It’s just fun to jump into a themed level, to try and kill as fast and as frequent as possible. There’s not much challenge to it, but that’s what makes it so worthwhile. The music and gameplay are infectious that made it hard for me to stop playing. It certainly has its foibles, but there’s nothing like Party Hard.