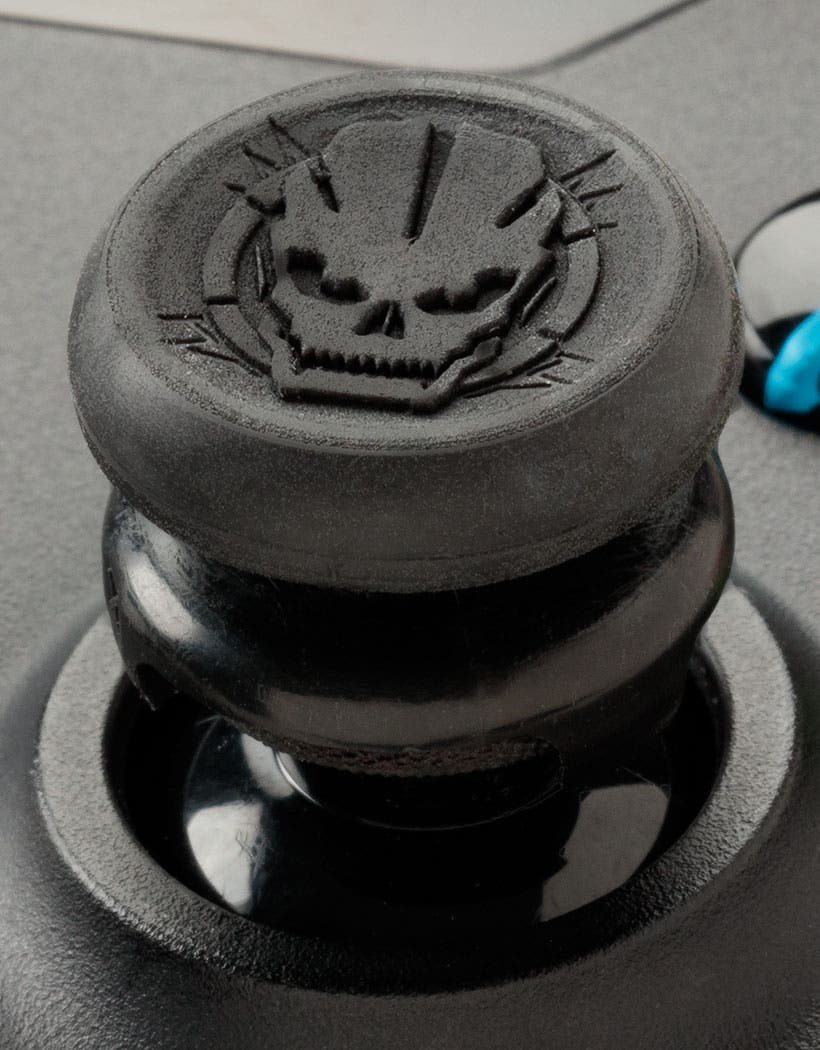 KontrolFreek is back with a new pair of thumbstick extenders, this time another branded version for the upcoming Call of Duty: Black Ops III, working with Treyarch throughout the process. This updated set of sticks differ from the original KontrolFreek FPS Freek Black Ops III Reveal Edition that was introduced earlier this year. As always, KontrolFreek completely understands their audience and desire to play first-person shooters with the utmost accuracy, and the FPS Freek Black Ops III Launch Edition is completely redesigned and delivers in all fronts.

The FPS Freek Black Ops III Launch Edition comes with two sticks at different heights, which are based on the FPS Freek Vortex which offers the same type of functionality of two sticks at different heights. One difference to note, is that these are concave, rather than convex. The full-size stick measures at 10.4mm, and the shorter one measures at 5.7mm. They’re designed for the shorter stick to be used on the left for responsive movement, and the longer stick on the right for faster aiming and improved accuracy. But there’s no reason it can’t be reversed so that movement is more reactive, and your aiming is slower, but still precise. I don’t have a way of confirming, but the FPS Freek Black Ops III Launch Edition sticks boast a 136% improvement in range of motion – but I do feel it. I was provided a review unit on Xbox One, so I was testing this with a first-person shooter, such as the multiplayer of Halo: The Master Chief Collection, and saw me spending less time acquiring my target, and more time getting kills. There was a noticeable improvement here. Third-person shooters like Gears of War: Ultimate Edition and Sunset Overdrive saw better responsiveness when moving the camera, and general movement speed. In the case of Forza Horizon 2, not much could really be tested. The shorter stick was better on the left stick and allowed me to steer with better accuracy, but the right stick was ultimately unusable as it made things too sensitive for moving the camera. But again, the FPS in FPS Freek is for first-person shooters, and not much else. But it was fun to try how these sticks change-up other games.

The look of the FPS Freek Black Ops III Reveal Edition is a bit subdued compared to the FPS Freek Black Ops III Reveal Edition sticks I reviewed earlier this year. This time, with the S.O.G. skull etching, provides a definitive look against the black controller. I quite liked the orange in the previous version, and was sad to see it go or not be an option for purchase here. The black-on-black stick has almost a felt feel. It’s grippy, yet soft to the touch. This ensured that no matter how long I was using the sticks, it never hurt my fingers while playing. Again, KontrolFreek outdoes itself with the FPS Freek Black Ops III Reveal Edition thumbstick extenders. This is the best way to play all kinds of shooters, but mainly the tighter control and responsiveness is only one of the reasons why you’ll stay. The different heights don’t feel weird like you might expect, but rather feels a natural extension of you. Once you try these Black Ops III themed FPS Freeks, it will be hard to go back to two same-height sticks again.