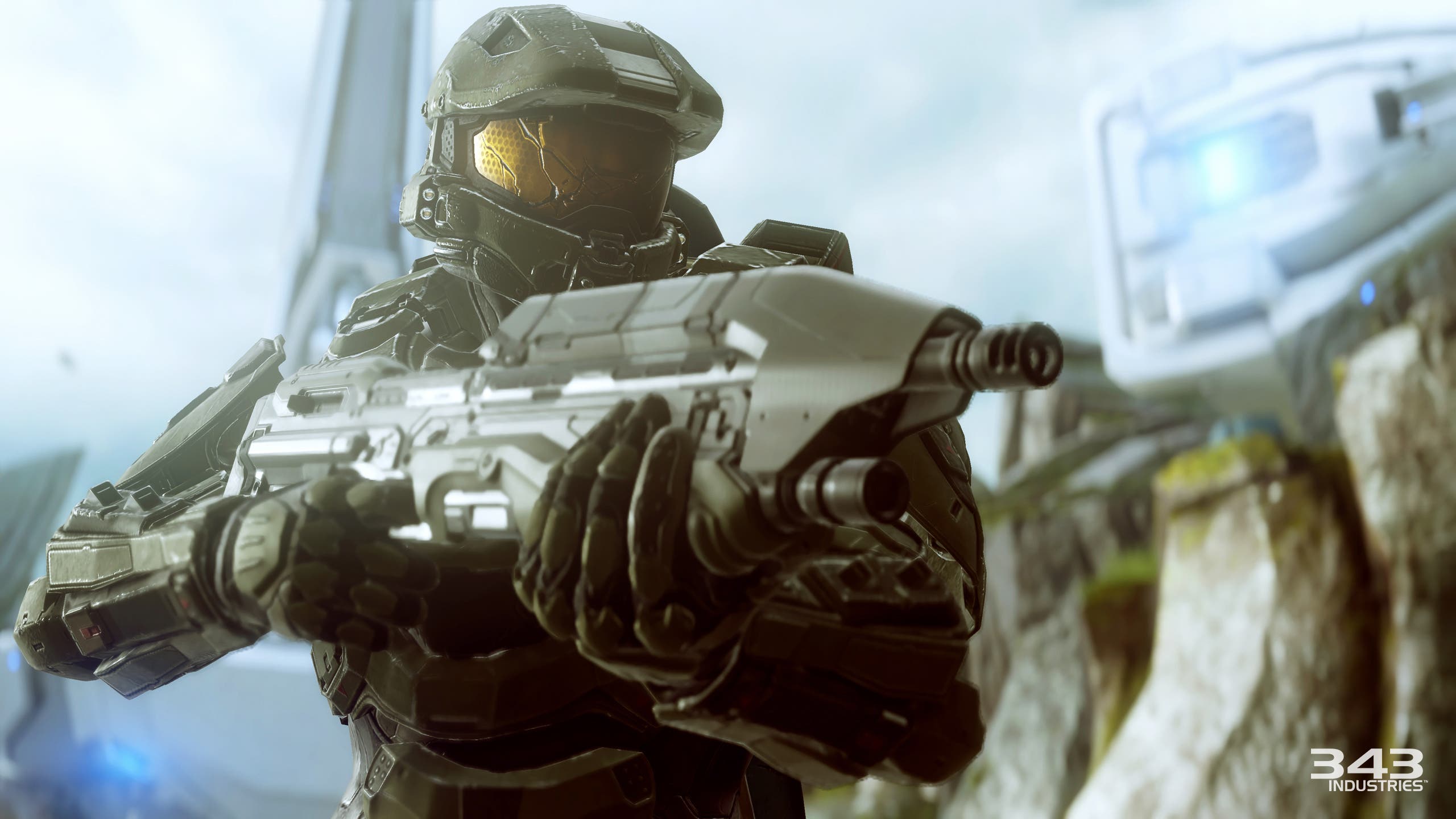 In life there are a few things that are absolute. Water is wet, time never stops, and there will be a Halo on an Xbox. Not that this is a bad thing however; Halo has always been Microsoft’s pride and joy on the Xbox consoles and good care is taken on each one. Even the less than stellar games like Spartan Assault or Halo Wars are created with love for the franchise. So it’ll be no surprise when I tell you that 343 have done an exceptional job with Halo 5: Guardians. A lot of work must have gone into this Halo title because the first thing you’ll notice is just how gorgeous it is. Right from the start, the intro movie has Spartans falling from an aircraft, sliding down a snowy ridge, and landing in the middle of a fire fight. All this while shooting and stabbing Covenant enemies along the way. The scene is beautifully rendered and gets you pumped for what’s to come. Most games would end up losing that buildup once the game actually starts, though with slow pacing and lots of dialogue that moment is usually gone. Not Halo 5 though, nope, you’re placed right into the middle of that firefight guns blazing. Once you have control over your Spartan, you’ll see right away that the scenery is breathtaking. You can see dogfights happening in the sky and enemies battling off in the distance. The snow beneath your feet looks so good that you have to convince yourself that you can’t grab it. Alone that’s impressive enough but throw in the fact that you’re seeing all this while the game is running at a liquid smooth 60 frames per second and prepare to hold back your own comments of “whoa”.

You start off behind the visor of Agent Locke, a Spartan whom you may know from Halo lore in other works. I believe he’s a part of the story in the live action Nightfall series which you can watch through the Halo Channel. In Halo 5 you command a group of three newer Spartans in search of the missing Dr. Halsey. Long time Halo fans probably know by now but the folks at 343 have even brought back Nathan Fillion to reprise his role as Buck from Halo: ODST. Now a Spartan, Buck joins the team under the leadership of Locke. Don’t worry though because it isn’t long until you get to the Master Chief and his merry band of Spartans as well. Again, if you’re familiar with the extended lore of the Halo universe, you’ll be in for a treat to see who the Chief is rolling with. Similar to Halo 2, you’ll end up switching between the two Spartan teams through the story. You’ll also meet up with some old friends along the way as the two sides of the story come together. Overall the story was enjoyable and had an ending that I knew was coming but was very sad to see play out. Not that it was terrible or predictable, but that I was genuinely sad at what is happening in the universe and to the characters I’ve grown up with for 14 years. I enjoyed what I experienced and can’t wait to see more. You don’t have to know any of the extended lore to enjoy the story but if you end up googling a character afterwards to get more information, I wouldn’t blame you. The campaign took me over eight hours or so on Normal difficulty and would probably take longer on Heroic or Legendary, but even at eight I felt like that was a good solid eight hours of game to experience. You don’t have to play through this game alone though. Halo has always had the ability to have a friend join in on the story fun and play co-op together and this time around you’re able to have up to four people playing in a party. With the introduction of 4 player co-op come some new features like being able to heal your team mates. It’s definitely nice to be able to just revive someone rather than try to run away from enemies so your co-op partner can come back. To balance things out, you are vulnerable while trying to heal someone so you do have to be careful when you do so. When your team mates are controlled by AI they will come over to help but they aren’t the brightest bulb in the box; at least they do try. One major thing to note here, you cannot play co-op on a single Xbox One. There is no split screen, only online play with Xbox Live. Quite a big pill to swallow for 60 frames per second gameplay but everyone has different needs and some will miss that feature more than others.

The weaponry in the game is a mix of UNSC, Covenant, and Promethean tech. I enjoyed using the UNSC weaponry more but since you’re fighting on alien worlds usually away from the UNSC marines, I ran out of ammo rather quickly for these weapons. This meant having to use Covenant and Promethean tech. You’ll find that you’ll end up using a lot of Promethean weaponry throughout the campaign if you want to keep ammo handy. Most of the story revolves around battles with Prometheans so you’ll pick up a lot of their drops. Another new feature in the Halo series is the smart-link aiming system. It’s basically a bunch of words meaning to look down the sights. Previous Halo games had only a few select weapons you could zoom in with. Weapons like the Assault Rifle were just fired from the hip, but now you can zoom in and start firing even from non scoped weapons; a pleasant change to bring Halo gameplay into the modern age of shooters. We’ll just keep rolling with the new features and talk about your Spartan’s extended mobility. You can now clamber and use jet packs to dodge or hover. 343 has done some smart things here to keep you in control of your character by keeping the action moving along when you need it to. Things like a jetpack to quickly dodge from side to side or hover in the air for a short burst when aiming down the sights. You can also use a new charge ability to ram through breakable walls or melee an unsuspecting grunt. The biggest change for me came in the way of the clamber. Once you’re close to a ledge you can now grab that ledge and pull yourself up. It helps keep you moving without having to go around and try to look for another way up to a spot. I found this gem so much more useful in Multiplayer where I was able to evade some pursers by jumping to a ledge out of their way and, as they say, “getting the hell out of dodge”. Halo is also known for its great Multiplayer and by golly does Halo 5 deliver there as well. Your standard Multiplayer fare is here like my favorites Slayer and SWAT. During the review period only certain playlists were open for us to try in the Arena. They were all team based games and I was able to get into Slayer, SWAT, Capture the Flag, Breakout, and Strongholds. If the last two don’t sound familiar that’s ok because they’re new. Breakout was by far the cooler of the two I played. The game feels more “e-sport” oriented with a Tron like futuristic stage that your Spartans jettison onto. The object is to either kill everyone on the team or capture the flag. Once you’re dead, you’re out of the match till the next one starts. It’s fun to strategize in this mode and to have that experience of being the last man standing and still win it all for you team by killing everyone on the other team. Strongholds were not something I enjoyed all that much. It’s basically multiple king of the hill spots or if you’ve played Destiny’s Crucible, it’s the exact same thing as Control. There are three control points on the map and your team must stand in them until you have taken over that spot. Hold two or more spots and you start earning points. I’m sure this mode is for someone out there but it was not something I was into at all.

Since Halo 3, we’ve been able to customize our Spartans in multiplayer and Halo 5 delivers on this front. You’ll be able to change your helmet, armor, colors, emblem, weapon skin, stance, assassinations, and so on. It’s a lot that you can do but you can’t just change it from the get go, you have to earn your new stuff. This is where the new REQ system comes in. As you play matches, you’ll earn Requisition points. With the points you earn you’ll be able to buy packs of items that will either permanently unlock things like armor or give you the ability to use buffs for XP in future matches. Similar to how Mass Effect 3 used the tiered chest system in its multiplayer, Halo 5 gives you a gold, silver, and bronze pack to choose from. Personally I found it wasn’t that difficult to earn enough credits for a silver pack after a few matches and that pack guarantees you two permanently unlocked items for your Spartan whereas Bronze does not. There is no real point in going after bronze so my pro tip is to save for Silver or Gold. I know you’re probably wondering about Micro-transactions with this REQ system, and yes you’re right in thinking you can buy REQ. Fear not though, it’s not something that is required. Like I mentioned a second ago, you can easily earn enough REQ in a few matches to buy packs so being able to buy them for real money is really just for those who don’t want to wait. There is another big mode in Multiplayer and unfortunately I haven’t been able to play it yet. That mode is what they call Warzone. During the review period, they posted certain times Warzone would be available and unfortunately those times did not match up with my schedule so I cannot give an impression of how that mode is but I can say that it’s a mish-mash of PvP and PvE. It’s a 24 person battle that takes place on these large maps. Two teams of 12 fight each other, enemy AI minions, and AI bosses with the goal of being the first team to 1,000 points. You’ll also be able to capture bases or just straight up destroy the opposing team’s core. It sounds like a crazy mode with a lot of potential for good times. Once the game is out, I’ll be in that Warzone lobby for sure. If you have an Xbox One, chances are you had Halo in your sights to begin with. You came to this review either to confirm that your money is being well spent in your decision to buy Halo 5 or you have a genuine curiosity about this new Halo after the mess the Master Chief Collection left in your mouth. Well dear reader, feel safe knowing that for that $60 price tag, you’re getting a hell of a game. Full of Single player adventure, Multiplayer excitement, and all around fun time. Halo 5 is easily the best game to have in your Xbox One library. It’s all because 343 have done an exceptional job with Halo 5: Guardians. (You weren’t surprised, were you?)