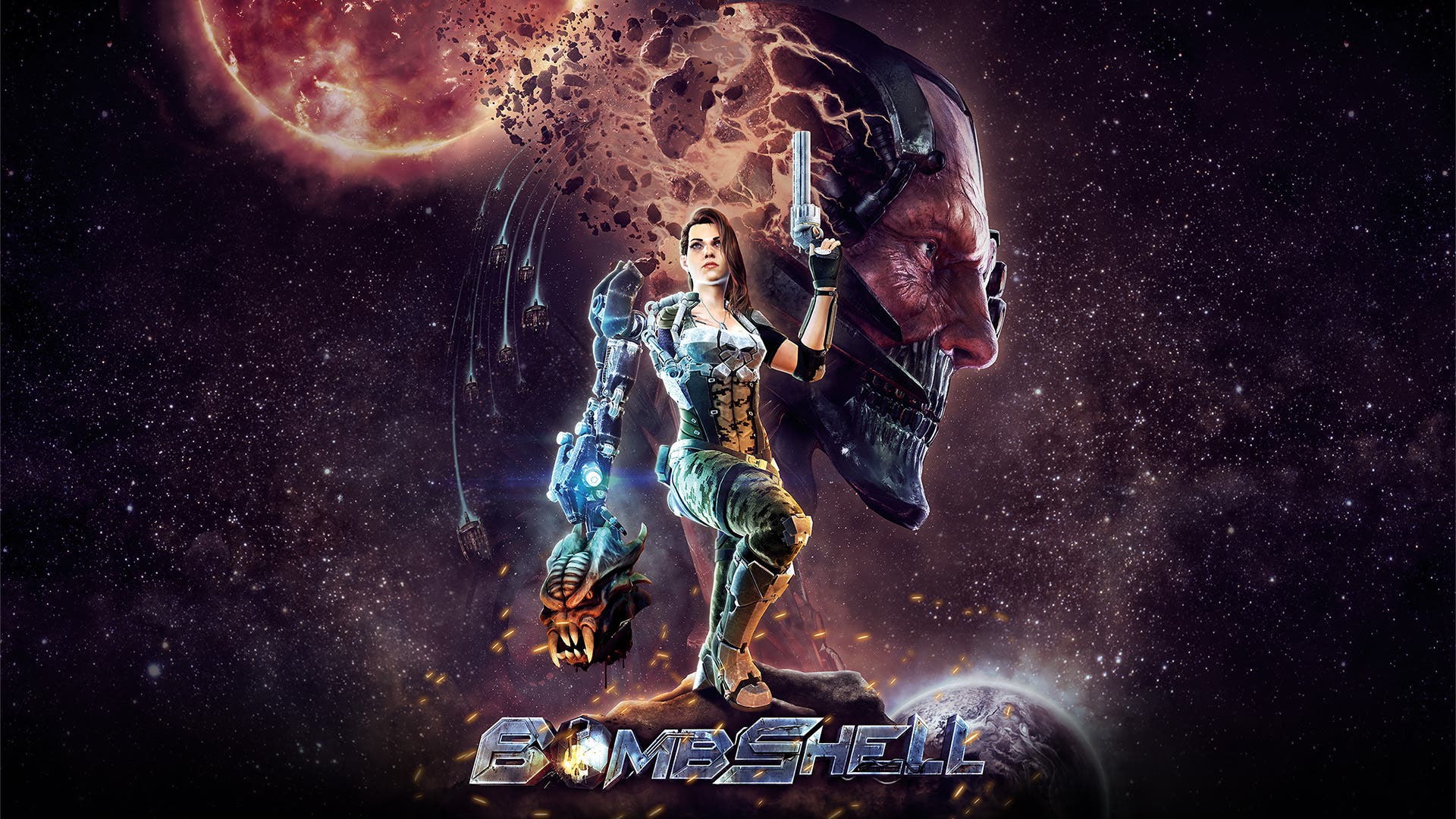 After some events transpire before the events of the game, Shelly “Bombshell” Harrison is left with a robotic arm that has been infused with AI. As the story goes, there’s an alien invasion, and the President has been kidnapped. The President, by the way is a woman with an eye-patch that also has the American flag on it, so that’s pretty cool. From there, the General of the GDF (Global Defense Force) dispatches you on a rescue mission to get the President back. The mechanical arm allows for Shelly to equip several weapons. There are some weapons won’t finish the job, so Shelly can perform executions for extra experience. While the game is primarily played from the isometric three-quarter view, there are sequences (while limited) to play from behind the back for some turret sequences. This helps break up the game, but in no way detracts from the full experience.

This being a PC game, I primarily played with mouse & keyboard. Bombshell supports gamepad really well, as it recognized each input from my Xbox One controller and works like it should. It by all accounts plays like a sci-fi Diablo, for comparison reasons. Each weapon can be upgraded using the in-game currency called “Ky”. With upgrades, a choice must be made with each weapon to use a unique alt-fire capability, maximizing the potential for each weapon, like the first gun you get to have a laser shot that does massive damage. Abilities can be deployed after picking them up like medkits to replenish health, acceleration boots to run faster for a period of time, and a ghost shell to throw a holographic version of Shelly as a distraction to use for evacuation.

The primary objectives of Bombshell are standard fare, but are never easy, often resorting to re-routing and requiring you to go out of your way as something always come up to which you can’t complete it as planned. There’s something to be said about not having a straight path from A to B, but the game all too often goes out of its way to disrupt what’s going on to send you elsewhere or or collect a group of things required to open a door or deactivate a shield. This results in you exploring the map maybe more than you would in other action RPGs. It becomes more a chore rather than a joy to uncover. Even more frustrating is the secondary objectives, which are always meaningless and rarely if ever exciting. Consisting mostly of fetch quests, is more of a chore than an exciting way to learn more about the goings on in the galaxy. The reward from completing them, only consist of ammo, money, or other goodies that you’re likely already stocked up on.

Bombshell takes place over four acts, comprising of twenty levels. While Bombshell covers only four major locations and fall into some cliches such as having rain, exploring a lava planet, traversing an ice planet, and a massive ship hurling through space. The game takes a healthy amount of time to complete, never wanting to stop. I completed the game at around 10 hours, and I can see this easily taking up to 15 hours to complete all objectives. This, coupled with the ability to start the game anew in New Game+ (Plus), adds value and a lifespan to the game. Death comes randomly in Bombshell, and should you die, you can either reload to the previous checkpoint. Or you can respawn to the location of the last checkpoint, but all enemies remain dead and a percentage of your money is taken. I found the respawn system much more useful, as I could deal with the loss of money much easier than re-killing enemies again.

There’s some oddities in the game, with randomly placed GDF soldiers and shopkeepers where you’d least expect them. In the final act, there’s a sudden influx of puzzles and platforming elements that are not present in any other section of the game. They just pop-up without any warning or instruction, they are easy to pick-up on and solve, but it feels like this section was made before or after the rest of the game and feels disconnected as a result. Andrew Hulshult’s soundtrack is a blistering, unrelenting series of guitars and drums that is willing to punch your eardrum without any remorse. It is one of those soundtracks that you listen to independently of the game because of how good it is. The other tracks, when used for ambiance are equally as good, providing a good mood during exploration. But when that metal kicks in for combat, it is just so right.

At first, playing the game was met with some muddy visuals despite having every setting at maximum. I have an NVIDIA GTX 780. It was recommended by 3DRealms that I have a NVIDIA GTX 960, but my 780 handled everything at max with a pretty constant 100fps (even with Vsync on). Constant updates through the pre-release process saw improved gameplay fidelity and visual stimuli. However, once I turned off the film grain option, it really made the graphics look crisper. Bombshell has introduced us to Shelly Harrison, and I’d like to see more of her. She’s a strong female lead that’s marred by some bad writing and repetitive and uninspired quips. She’s even got some really cool weapons and upgrade trees to experiment with. Bombshell starts off a bit weak, but does improve over the course of the game, but not by much. The odd decisions to constantly divert the player due to malfunctioning equipment or multi-part actuators is a huge bummer to the game’s flow. Bombshell can be enjoyable, but it more than often isn’t.