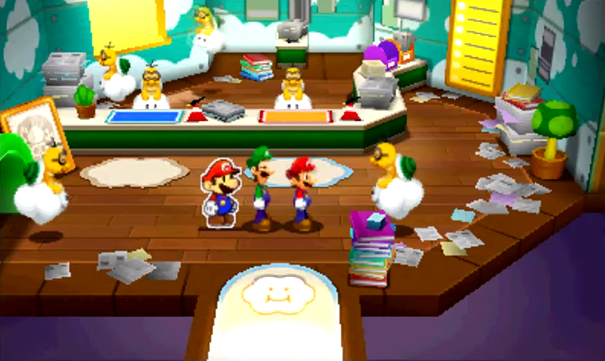 I’m no stranger to the world of role playing games and the effect Mario has had on them. From the original Mario RPG on SNES to Sticker Star Story, there has been plenty of adventure to have with the little plumber who could. Ok so maybe Mario hasn’t had a huge overall effect on the genre, but he has been a staple in my gaming life for years and it’s great to see them take two different eras of Mario RPGs and smash them together in the ultimate paper jam. The story starts off simple enough, a book has been opened and all the paper enemies have leaked out from the Paper Mario series and into the Mario and Luigi franchise.  Sounds like a receipt for excitement right?  It’s is for the most part and works fairly well in bringing together duplicate enemies and characters into the fray with some hilarious results at times.  We have double the Bowser trouble and they kidnap both princesses.  What’s a group of brothers to do? Rescue them of course and this time with the help of Paper Mario.

Throwing together the elements of Paper Mario and Mario and Luigi opens up to some interesting aspects, not only in visual design but with combat. Some enemies float around, others are more rounded. Paper Mario can jump and keep himself afloat when in combat or transformer into a paper airplane to assist the brothers in a boss fight chase sequence. It’s these moments that add to the overall feel and charm, giving players that special feeling between both franchises and seeing what has been created in the process.  Combat remains both turned based and active with the three brothers having to work together to dodge and overcome any attacks that come their way.  It can get downright intense but so rewarding when you figure out the patterns or learn how to dodge enemies correctly.

Exploring the world now takes a different turn of events also because Paper Mario can fit in locations that others might not be able to.  As you explore you can run past enemies, hit blocks for coins and other bonuses and seeing the various areas the game puts players through is part of the charm, even if it’s somewhat familiar. I feel it plays it a bit too safe with its location and being in the typical kingdom where as other games in the series take place in some pretty wild locations.  It’s not boring, it’s just typical.  One element I wasn’t exactly pleased with was the constant mini games of having to find the toads. These just end up feeling like time killers and just a waste. It’s not going to make me think less of the game, but it just feels unsatisfactory and almost kills the pacing at times. Mario and Luigi Paper Jam does one thing really well and falls in line with the rest of the games for me. They make me smile, laugh, and have a grand adventure all at the same time. The wittiness in dialog, the fun and unique combat mechanics, and the feel of adventure always come through with these titles. If players find themselves always partial to the Mario RPG games, there is no reason to shy away from this latest one. Granted if you never cared for the style or vibe they give off, this one won’t sway players to the Mario RPG side.

A copy of the game was provided by the publisher for review purposes.