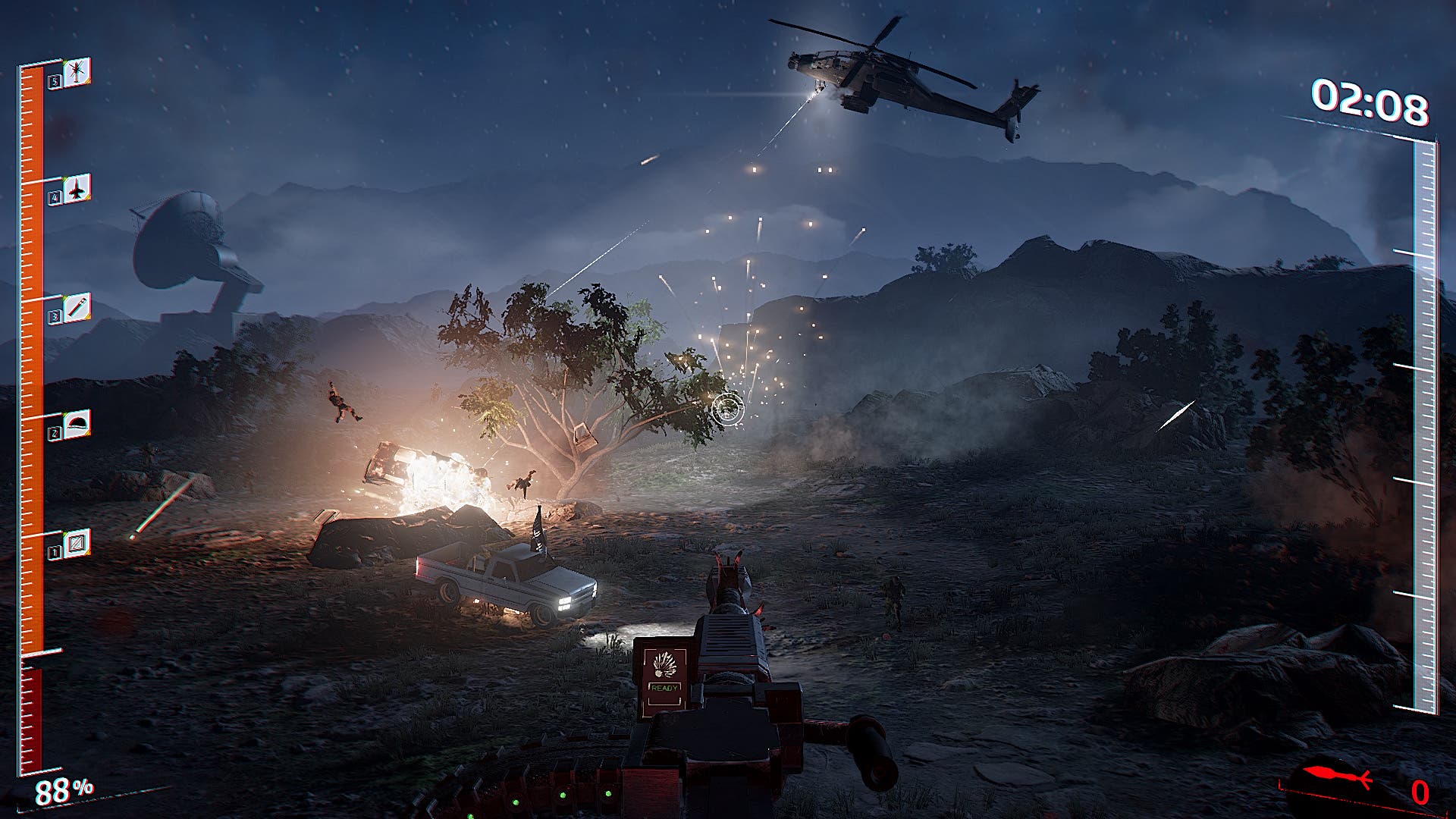 Destructive Creations is back with IS Defense, a game with satisfying gameplay and unyielding explosions that’s not as easy as it seems. This is also one of those games that could easily be translated to mobile or a VR game, it has many more applications than just being a PC game. IS Defense is a side-project and the developer’s statement about current affairs in the world today, and where things might be heading. Whether that comes to light or not, we’ve got this entertaining piece of quasi-fiction to kill with mind-numbing ease. Taking place in a plausible, faux-futuristic 2020 where ISIS has expanded beyond control and expectations, you play as a stationary machine-gun operator within NATO (North Atlantic Treaty Organization). You’re deployed to the shores of Europe to repel the invasion of the Islamic State, and things ramp up rather quickly each time you start a level. Even with its serious tone, is a game that’s fun to play no matter how much time you’re willing to give it.

IS Defense will take you to three different locales, with different times of day and weather changing as your progress through a level. You’ll first visit the Shores of Italy, then off to Harbor of Spain, and finally to the Mainland of Croatia. To reach the second and third level, they are gated by number of terrorists killed and vehicles destroyed. IS Defense is a difficult game, it is challenging despite being somewhat repetitive and what many would consider to be a grind, but that’s part of the core gameplay. This is aided by a leaderboard that appears that compares your current score against your friends and the world, giving some competition to the shooting.

You wouldn’t know it by looks alone, but this is a game that must be played tactically. It is about prioritizing your targets, and using your ammo efficiently. You have a full 180-degrees of movement, and the game is good about informing you about targets that need to be dealt with on your flanks.

IS Defense doesn’t play all that much different from a first-person shooter, only you can’t move. You’ll aim, shoot, and have to reload when ammo is depleted. You can shoot a limited number of rockets that can be replenished from supply crates. And like the aforementioned movement, you can rotate your turret to take out enemies that want to flank you, but leaves you vulnerable on your sides, so it must be done carefully.

As you play a level, you’ll earn support abilities. These support abilities work similarly to Call of Duty‘s scorestreak rewards. After killing enough terrorists, you’ll earn the first of five rewards, the first being a supply crate that can drop health and/or ammo. The second is soldiers on-foot, then there’s an artillery barrage, a jet fighter airstrike, and lastly a hovering chopper. And like Call of Duty, you can save the support for the big guns or call in what you need. It’s surprisingly simple and effective to keep you going.

Playing through a level, no matter how long will earn you experience that unlocks skill points that can be spent on a tree to provide passive enhancements to your game, permanently. The player tree focuses on health and survivability, the machine gun tree increases its effectiveness, rocket launcher upgrades are about area of effect damage, and support upgrades are enhancing support abilities. The skills that can be spent get exponentially more expensive, but can be saved up to purchase higher tier versions without having to buy the lower tier versions first. This allows for some much appreciated player customization and choice for their games. IS Defense is Destructive Creation’s attempt to resurrect what they deem to be a dead genre of games like Operation Wolf and Beach Head. And I find them successful at doing so, injecting something fresh into the genre and giving it purpose. IS Defense is enjoyable and appropriately priced, and comes well-recommended.