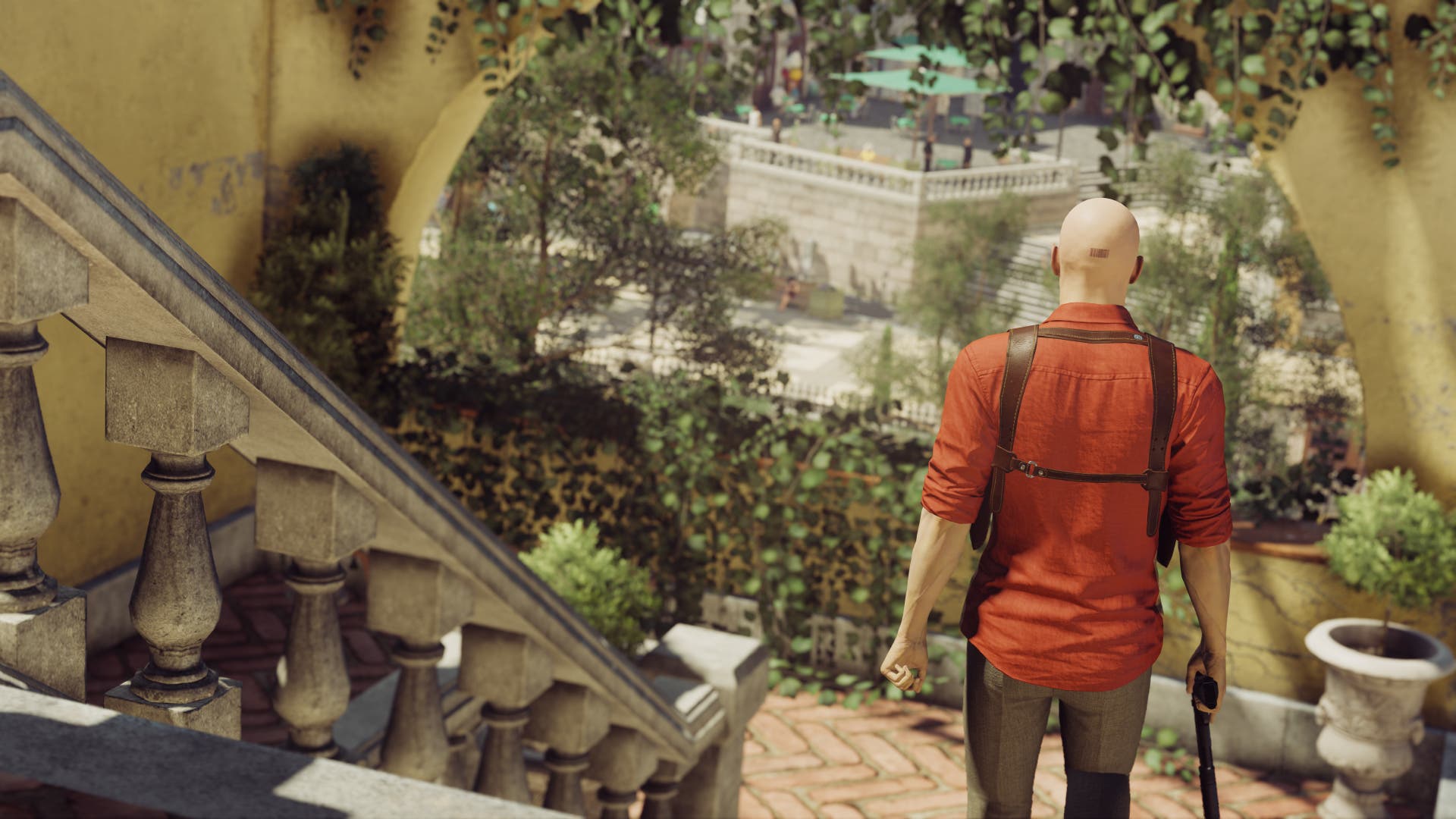 Agent 47 is back in the second episode of HITMAN, and while there’s only one new location to visit, it’s one worth revisiting over and over with its branching pathways and multitude of avenues for achieving your goals. It’s a massive, sprawling level full of secrets and nuanced ways to achieve your objectives. HITMAN again proves that episodic is not only the way to go, but is a return to form for the series.

Episode 2, titled “Sapienza” dispatches Agent 47 to the Almalfi Coast of Italy. This sole new locale is gorgeous to look at, a sun-soaked place with cliffs and dwellings off into the distance with beautiful blue ocean. It’s also home to an unsuspecting organization ready to unleash a virus via its underground facility that threatens anyone that they make a target.

As with all missions, and all games in the series, it’s all about the disguises. But it’s ever-present in Sapienza’s mission, “World of Tomorrow”. There’s cameras that watch over areas, guards are roaming endlessly, and access cards are barriers for entry. This is an innocuous location with security packed to the brim. Agent 47’s only chance at stealth is to blend in and take on many disguises to trick the unsuspecting. I’m not dismayed at this reliance, as it feels like proper espionage and stealth. You need to be a chameleon in achieving the greater goal.

Agent 47 is afforded numerous avenues towards killing his targets, and in doing so the player is given a lot of freedom of choice. The opportunities that arise (if not turned off) do lead the player by the hand, so turning them off leaves for more subtle chances of discovery and more of a reward for luring one of the targets away for snuggle time with the person they’re having an affair with, or by poisoning the family’s sauce recipe just before lunch. There’s a lot of ground to cover, and there’s a lot of fun to be had by messing with everyone.

The story-driven arc of HITMAN only has one cutscene to end-cap of the story missions, making you wonder why you’re going to places that you are. At least this time around, whatever it is that is driving the plot is more grounded than that of Hitman: Absolution. But I just wish there was a bit more going on that made everything more cohesive than just a new level.

Like the previous episode, there’s an escalation contract that goes along with this episodic entry, and it’s quite challenging with the imposing security and required access. Each tier of the contract requires a lot of forethought and planning before moving in, improvisation will only get you so far. At mission completion, you’ll open up challenges and feats towards gaining Mastery on the Sapienza level. In playing the new content on day one, I found that the server stability was improved, and had not been kicked offline. Whereas the day before, just playing prior levels I had been. Not sure what was changed, but it’s nice not to be kicked out mid-game. Episode 2 feels like HITMAN is starting to come together. You can see the pieces coming together for the story, but isn’t providing continuity for these new levels to feel anything but new levels. Replayability is still strong with HITMAN, but certainly the first episode feels worn when returning to it. If Sapienza is any indication for what’s to come, Agent 47 is going to have his hands full in some large locations to dispatch his enemies with. This one level addition is massive in scope and scale, and I can’t wait to see more.